LeBron James was fined US$15,000 for an obscene gesture Friday by the NBA, which also warned the Lakers superstar about using profane language.

James made the gesture after making a shot late in Los Angeles’ 124-116 overtime victory in Indiana on Wednesday night. Late in the fourth quarter, he performed a celebration dance that has been associated with former NBA player Sam Cassell.

He had missed a loss at New York a night earlier after he was suspended one game for hitting Detroit center Isaiah Stewart in the face and drawing blood last Sunday. He used profanity in his postgame interview after the victory in Indiana when discussing the suspension.

– With a file from Reuters

This content appears as provided to The Globe by the originating wire service. It has not been edited by Globe staff.

Researchers at a Toronto-based tech laboratory have uncovered security vulnerabilities and censorship frameworks in an app all 2022 Beijing Olympics attendees must use.

The Citizen Lab, a research institute at the University of Toronto’s Munk School of Global Affairs and Public Policy that studies spyware, found a “simple but devastating” flaw in the MY2022 app that makes audio files, health and customs forms transmitting passport details, and medical and travel history vulnerable to hackers.

Researcher Jeffrey Knockel found MY2022 does not validate some SSL certificates, digital infrastructure that uses encryption to secure apps and ensures no unauthorized people can access information as it is transmitted.

This failure to validate means the app can be deceived into connecting with malicious hosts it mistakes as being trusted, allowing information the app transmits to servers to be intercepted and attackers to display fake instructions to users.

“The worst-case scenario is that someone is intercepting all the traffic and recording all the passport details, all the medical details,” said Knockel, a research associate, who investigated the app after a journalist curious about its security functions approached him.

The Citizen Lab, a socio-political research group from the University of Toronto’s Munk School of Global Affairs & Public Policy, found the Beijing 2022 companion app, to be used by Olympians and other attendees of the Games, has a security flaw that opens up any user’s personal data to hackers. David Masson, chair of enterprise security at Darktrace, joined to explain the potential dangers of the app to its users. 4:45

Olympic organizers have required all games attendees, including athletes, spectators and media members, to download and start using the MY2022 app for submitting health and customs information like COVID-19 test results and vaccination status at least 14 days ahead of their arrival in China.

The Olympic playbook outlines personal data such as biographical information and health-related data may be processed by Beijing 2022, International Olympic and Paralympic committees, Chinese authorities and “others involved in the implementation of the [COVID-19] countermeasures.”

Knockel said MY2022 outlines several scenarios where it will disclose personal information without user consent, which include but are not limited to national security matters, public health incidents, and criminal investigations.

However, the app does not specify whether court orders will be required to gain access to this information and who will be eligible to receive data.

Cybersecurity experts at the University of Toronto are voicing concerns about the My2022 app, which is required for all participants in the Beijing Winter Olympics. 3:44

The final concern Knockel uncovered was that the app allows users to report “politically sensitive” content and found it has a censorship keyword list.

The list includes 2,442 political terms, including some linked to tensions in Xinjiang and Tibet, as well as references to Chinese government agencies. On the list are Chinese phrases translating to “Jews are pigs” and “Chinese are all dogs,” Uyghur terms for “the Holy Quran” and Tibetan words referring to the Dalai Lama.

Knockel couldn’t find evidence the list was being used by the app.

The Citizen Lab disclosed the concerns it found with MY2022 to organizing committees on Dec. 3, giving them 15 days to respond and 45 days to fix the issues, before it publicly disclosed the problems.

A new version of MY2022 for iOS users was released on Jan. 6, but Citizen Lab said no issues were resolved with the update. In fact, Citizen Lab said the update introduced a new “Green Health Code” feature that collects more medical data and is vulnerable to attacks because of its lack of SSL certificate validation.

The Beijing Organizing Committee did not respond to a request for comment.

The International Olympic Committee said in a statement that it has requested a copy of the Citizen Lab’s report to better understand its concerns.

The IOC noted it has conducted independent third-party assessments on MY2022 with two cyber-security testing organizations and found there are no critical vulnerabilities in the app.

Meanwhile, the Canadian Olympic Committee did not address the report specifically, but said it has reminded all members of Team Canada that the Games present a unique opportunity for cybercrime and they should be extra diligent about these risks.

It said in a statement it has recommended Team Canada members leave personal devices at home, limit personal information stored on electronics brought to the Games, only connect to official Wi-Fi, turn off transmitting functions when not in use and remove any Games related apps when they’re no longer necessary.

Knockel recommends anyone headed to the Olympics only use the app when connected to networks they trust, like a virtual private network.

Olympic participants should also consider taking conversations and other actions that are not mandatory to complete in MY2022 to other apps with better security, he said.

“But it’s tricky,” he said. “Even if they are aware of the security vulnerabilities in the app, they might not have a choice.” 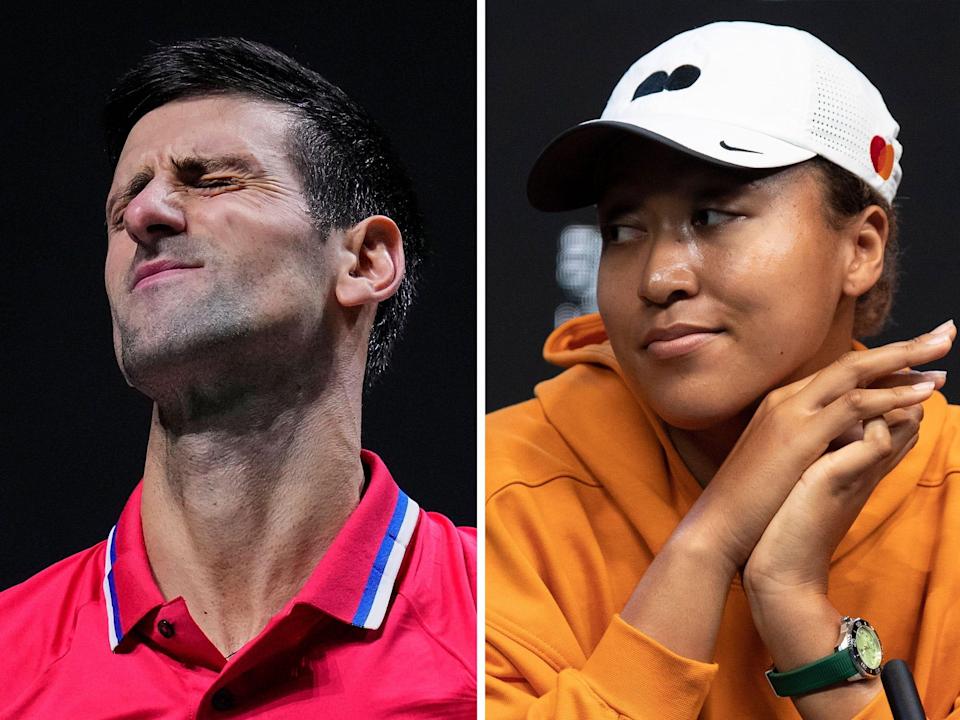 The whole world watched as Novak Djokovic, the best men’s tennis player, sparred with Australia’s legal system in a bid to bend the rules and compete at the Australian Open without a COVID-19 vaccine.

While the Serbian superstar was deported before the tournament began, the question of whether he should have been allowed to play for his 21st Grand Slam title lingered around Rod Laver Arena.

But as far as Naomi Osaka is concerned, it’s not a topic worth addressing — at least not with the press.

During her post-match press conference Sunday, the reigning Australian Open champion shut down a journalist’s question about whether the unvaccinated Djokovic should be playing at this year’s tournament.

“Is my opinion going to help anything?” Osaka asked in response, then added: “I’ll pass on that. Thanks, though.”

Osaka appeared respectful but firm and confident in her reply, which marked a shift in her historically fraught relationship with the media. She’s been open about her nerves when addressing the media, and last year, the anxiety prompted her media blackout at the French Open.

While the Roland Garros situation resulted in a months-long tennis hiatus for the Japanese hard hitter, she now seems better equipped to handle adversity — in the press and on the court — than ever before.

Check out the clip of Osaka’s exchange below:

Read the original article on Insider

Athletes travelling to next month’s Beijing Olympics were warned on Tuesday about speaking up on human rights issues while in China for their own safety by speakers at a seminar hosted by Human Rights Watch.

Rights groups have long criticised the International Olympic Committee (IOC) for awarding the Games to China, citing the treatment by the Chinese government of the Uyghurs and other Muslim minority groups, which the United States has deemed genocide. China denies the allegations of human rights abuses.

“There’s really not much protection that we believe is going to be afforded to athletes,” Rob Koehler, the director general of the Global Athlete group, said in the seminar. “Silence is complicity and that’s why we have concerns.

“So we’re advising athletes not to speak up. We want them to compete and use their voice when they get home.”

Rule 50 of the Olympic Charter states that “no kind of demonstration or political, religious or racial propaganda is permitted in any Olympic sites, venues or other areas”.

“People can be charged with picking quarrels or provoking trouble. There are all kinds of crimes that can be levelled at peaceful, critical comments.”

Noah Hoffman, a cross-country skier who represented the U.S. at the 2014 and 2018 Winter Games, said the American team was being shielded from questions about human rights.

“I feel fear for my team mates going to China,” Hoffman said. “I know my team mates are being shielded about questions on these issues for their own safety.

“We should never be having to protect athletes from speaking out about issues that they think are really important.

“My hope for athletes there is that they stay silent because they are not only going to be prosecuted by the Chinese authorities, but they could also be punished by the IOC.”

Concerns about data privacy and spying at the Games were raised on Tuesday when a smartphone app built by China to monitor the health of attendees was reported to contain security flaws.

“When it comes to surveillance, we know it’s there,” Koehler said.

“There are reasons that several countries have come out and asked athletes not to bring their own mobile devices. Any person of a sane mind who hears these things must have concerns.”

The IOC said in an emailed response to a request for comment from Reuters that the Olympic body “recognises and upholds human rights  as enshrined in both the Fundamental Principles of the Olympic Charter and in its Code of Ethics” at all times.

The Winter Olympics are set to begin on Feb. 4. Several countries including the United States, Britain, Japan and Australia have announced diplomatic boycotts of the Games over concerns about human rights in China.

(Reporting by Aadi Nair in Bengaluru; Editing by Toby Davis)

More real estate trends to watch in 2022 – The Washington Post