The Maple Leafs are looking for balance.

And they’re hoping their best player will be part of the solution.

In the wake of Wednesday’s 3-1 loss to Edmonton where Toronto severely limited Oilers stars Connor McDavid and Leon Draisaitl at 5 on 5, but also failed to offer much of anything going the other way in a plodding, mostly uneventful affair, the Leafs are aiming for more symmetry.

“Just because we’re defending well doesn’t mean we can’t be attacking and playing well in the offensive zone,” said winger Zach Hyman. “You can have both. You don’t have to have one without the other.”

What’s unclear is whether Toronto will have star centre Auston Matthews to help lead the charge in Friday’s rematch at Scotiabank Arena. The 23-year-old took the ice before Thursday’s practice, had a conversation with assistant coach Manny Malhotra and another chat with a trainer before departing ahead of the formal session.

Toronto is already minus two options up front with veteran forward Joe Thornton, who suffered an upper-body injury against the Oilers, expected to miss time, and winger Nick Robertson (knee) unavailable. Keefe put his lines in a blender out of necessity Thursday, bumping Hyman into the top-6 alongside John Tavares and William Nylander, while Jimmy Vesey skated in Thornton’s spot with taxi squad member Adam Brooks — a practice placeholder for Matthews — and Mitch Marner. 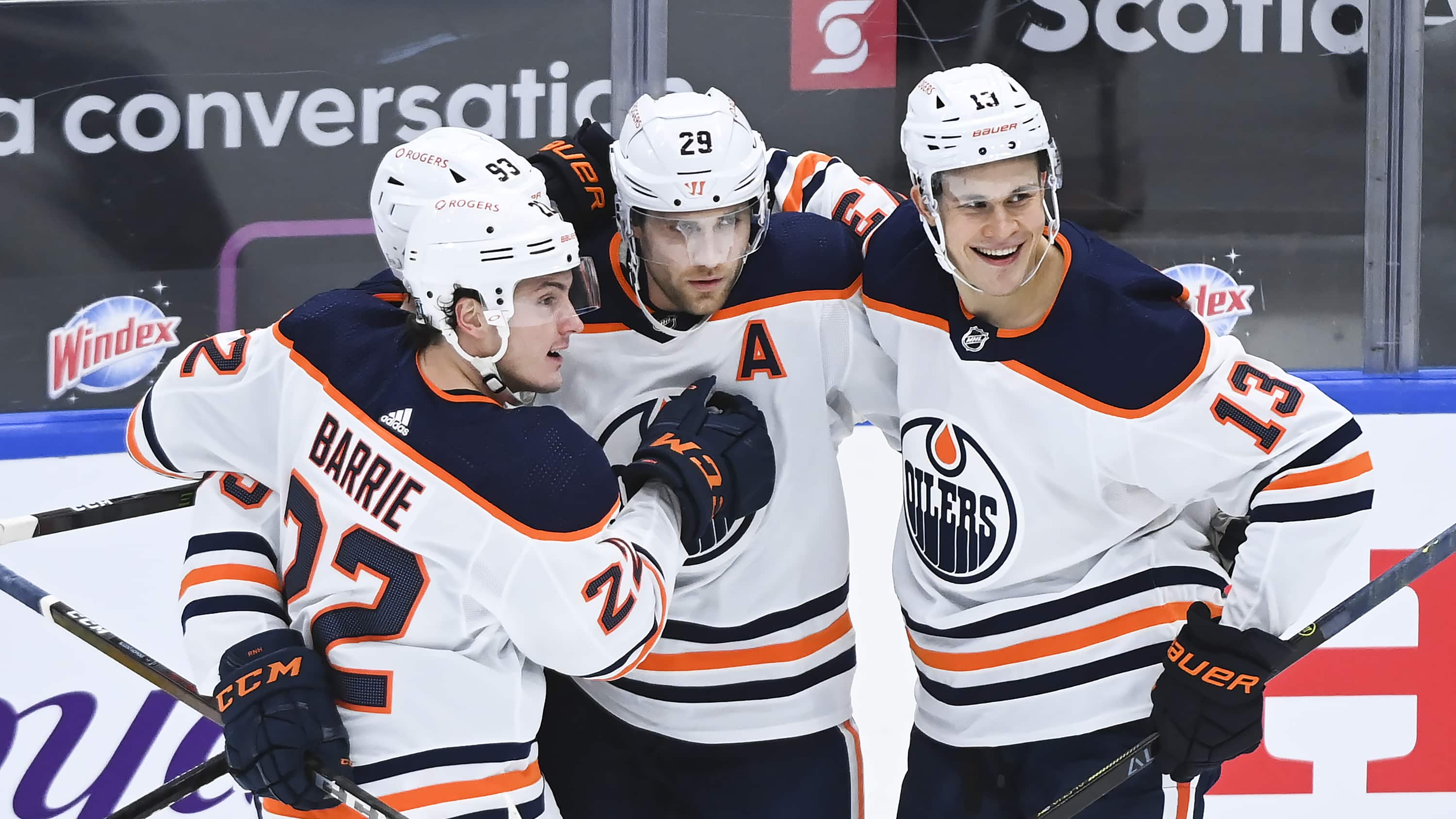 The Leafs gave up a fluke own goal, a power-play effort from Draisaitl that came off a fortunate bounce and an empty-netter in Wednesday’s matchup that, despite a boatload of talent under one roof, never saw the expected fireworks materialize.

“We negated the biggest offensive threats on their team,” Keefe said. “It gave us a chance to win, but certainly we have to deliver on the other side of the puck as well.”

Toronto goalie Frederik Andersen, who seems to be finding his groove after some early hiccups, had a front-row seat to the on-ice chess match — the first of nine meetings between the North Division rivals in this abbreviated season.

“I saw two teams that definitely locked it down pretty good defensively,” he said. “Great teams do both things well. I think we have that ability. It’s something we want to set the standard to do every night.

“Even though you play well, you might not get the results you want.”

Oilers head coach Dave Tippett made the point after his team’s practice Thursday that both rosters have a say in the other’s ability or inability to score at even strength.

“It’s almost funny to me how everybody talked all [off-season] about Toronto and Edmonton have to defend better,” he said of the offensive juggernauts’ past troubles keeping the puck out of their respective nets. “And then Toronto and Edmonton actually defend well, and now they think it’s a bad hockey game.

“It just baffles me sometimes.” 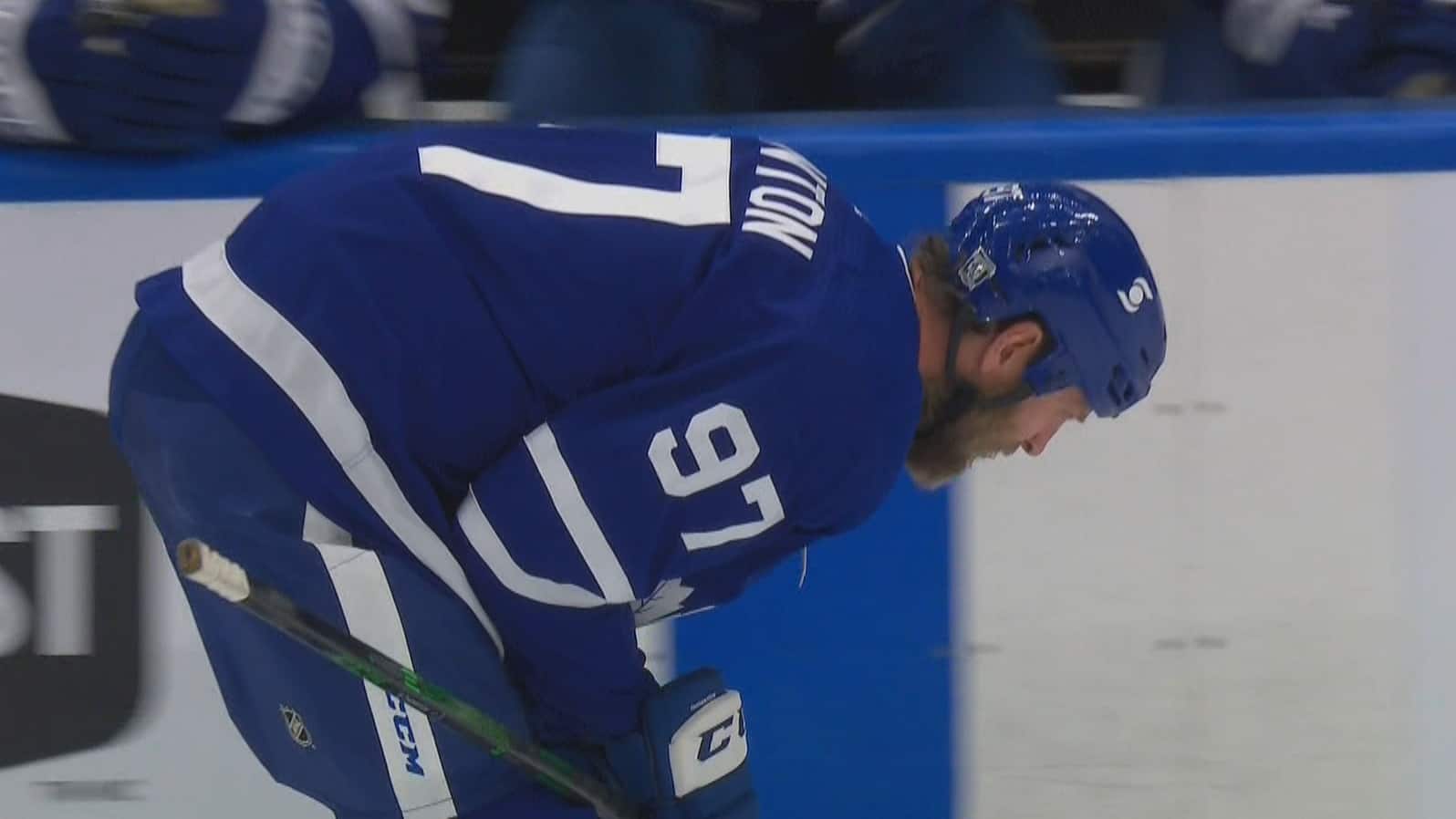 Leafs blue-liner Jake Muzzin said finding a balance between trying to contain elite skill and pushing forward can be tricky.

“Maybe [on Wednesday] we focused a little too much on defending.”

As for Toronto’s new line combinations, Hyman said he’s looking forward to suiting up with Tavares and Marner after playing with both separately at different points in their careers.

“Excited to get at it,” Hyman said. “This year more than any year, your depth is going to be tested. Fortunately for us, we have a ton of guys who can move up and down the lineup.”

Keefe said despite the criticism of Wednesday’s performance — it was far from easy on the eye — the Oilers deserved credit for a committed defensive effort.

Now the Leafs need to respond.

“They clearly came in with a plan,” Keefe said. “It was two teams that were trying to respect each other’s strengths and nullify them. Ultimately, as much as we didn’t like our game … we gave ourselves a chance.

“There’s lot of encouraging signs there. We’ve just got to put it all together. We’ll stay at it.”

Here’s the thing about Bingo.

If you don’t take advantage of the free space in the middle of the card, you’re increasing the odds of everyone else around you.

The Calgary Flames’ dobbers went dry again Monday, becoming the first Canadian club to post two regulation losses against an Ottawa Senators team everyone else in Canada has feasted on.

To simply keep pace with division rivals, wins over the last-place Senators are a must, which is why the Flames’ season may very well hang in the balance over their next three games.

A Saturday matchup against the Edmonton Oilers is bookended by visits from a Senators team that just took the Flames’ lunch money once again.

A 5-1 loss Monday, combined with a 6-1 defeat Thursday, saw the rebuilding Senators outscore the Flames 14-8 over three games.

Sure the Senators are a hard-working squad that has improved steadily of late, winning six of their last nine.

But they’re still the Senators, a team the Oilers beat all four meetings, the Vancouver Canucks beat all three meetings and the Jets topped in four of five.

The Toronto Maple Leafs are 3-1-1 against their provincial rivals, leaving the sinking Montreal Canadiens as the only team that has played them to a draw at 1-1-2.

Then there are the sad-sack Flames, who lead the league in losses to last-place teams, giveaways and consecutive defeats while scoring just a single goal.

They increased that last dubious record to seven games Monday.

“All the teams in this division are good — there’s not much of a difference from the top teams to the bottom,” said Elias Lindholm, whose club escaped the first period with a scoreless draw before being outshot 22-6 in the second.

“Today, our first period was pretty solid and everything we did good in the first we did the opposite in the second and third. I think our patience out there was pretty bad and we started making some tough plays and turning pucks over — the kind of things we need to stop doing.”

The Senators opened the scoring after Sam Bennett was unable to handle a bad pass in the neutral zone from Milan Lucic.

Drake Batherson’s first of two goals put the Senators up 2-0 before a Lucic power-play marker lifted the Flames’ hopes. Briefly.

Eighty-four seconds later David Rittich got in on the giveaway game by mishandling a dump-in he promptly batted to Batherson, whose shot deflected in off of Mark Giordano as the Flames netminder tried scrambling back into the net.

It was another in the growing collection of moments that deflated the Flames’ bench and made it tough to create any offence as Ottawa sat on the lead and padded the humiliation with an empty-netter and a late deflection.

“We’ve got to come up with the solutions ourselves,” said coach Geoff Ward, whose team now sits closer to last place than it does to second-place Edmonton.

“As a team, we’ve got to be more committed to playing the game the right way. We’ve got to make sure we don’t let things compound. When something happens that’s not the way we want it to be we can’t fall back — we have to get a push in the right direction. Right now, when things are rolling the way they are for us, I think the confidence gets a little fragile and things start to compound, and we’ve got to find a way to make it turn the corner the other way.”

The Flames finish their gruelling, six-game roadie 2-3-1 and return to host Ottawa on Thursday having lost seven of their last 10.

The players are struggling to come up with answers to the same old questions, and Matthew Tkachuk was so despondent after the latest setback he couldn’t muster up any of the fury you’d expect to hear from a leader on a team slipping closer and closer to losing control on the season.

“We’ve got to figure this out in the next two days before we play them again. We’re getting way too used to games where we’re down a couple in the third.”

Especially against teams previously considered the free spot on the Bingo card.

Qualifier Andy Murray rallied from three games down in the third set to defeat Dutchman Robin Haase 2-6, 7-6 (2), 6-3 on Monday at the ABN AMRO World Tennis Tournament in Rotterdam, Netherlands.

The former world No. 1 of England needed nearly 2 1/2 hours to secure his first tour-level victory since the 2020 U.S. Open.

Seeded players ruled the day in Buenos Aires as No. 6 Pablo Andujar and No. 7 Laslo Djere advanced in the Argentina Open.

WINNIPEG — When the Vancouver Canucks discovered that screened point shots were getting results, they kept doing it.

By the time the Winnipeg Jets figured things out, it was too late.

Vancouver scored three first-period goals in similar fashion Monday night in a 4-0 victory at Bell MTS Place. Nate Schmidt, J.T. Miller and Nils Hoglander staked the Canucks to an early lead and Thatcher Demko did the rest, making 27 saves for his first shutout of the season.

All three goals came from shots inside the blue line that were tipped, redirected or knuckled past Winnipeg goaltender Connor Hellebuyck.

“When you know you can get yourself into those areas, that’s where the goals are scored,” said Schmidt. “I was proud of our guys for how we got to those areas tonight.”

Elias Pettersson sealed it with an empty-net goal as the Canucks (9-14-2) won for the first time in five games and ended Winnipeg’s four-game winning streak.

After being held to one shot on goal over the first eight-plus minutes, Schmidt sent a fluttering shot from the high slot past a screened Hellebuyck at 8:28.

Vancouver’s second power-play unit used the same formula to extend the lead at 14:50. Tyler Myers sent a wrist shot from inside the blue line that Hoglander tipped to make it 3-0.

Demko, meanwhile, was steady when needed in the Vancouver net. He gave up few rebounds and delivered when the Jets pressed late in the game.

“I think over the last handful of games, our defensive side of things is coming along really nicely,” Demko said. “Tonight was kind of the pinnacle of building up to this point.”

After a sluggish first period, the Jets (13-7-1) seemed more inspired in the second period but had difficulty delivering any sustained pressure.

Mark Scheifele had two decent chances midway through the third period and Blake Wheeler was denied after a crafty deflection on a Sami Niku shot.

The Jets pulled Hellebuyck with over five minutes left in regulation. Winnipeg hit the post on a deflected shot before Pettersson put the game away at 16:26.

The teams will face off again Tuesday night in the finale of the Jets’ four-game homestand.

“You’ve got to have a short memory in this league,” Scheifele said. “You can’t dwell on things too long. You’ve got to get a good sleep tonight and get ready for tomorrow.”

After Tuesday’s game, the Jets will take to the road for 12 of their next 14 games.

The Canucks will return home to kick off a five-game homestand Thursday against the Toronto Maple Leafs at Rogers Arena.