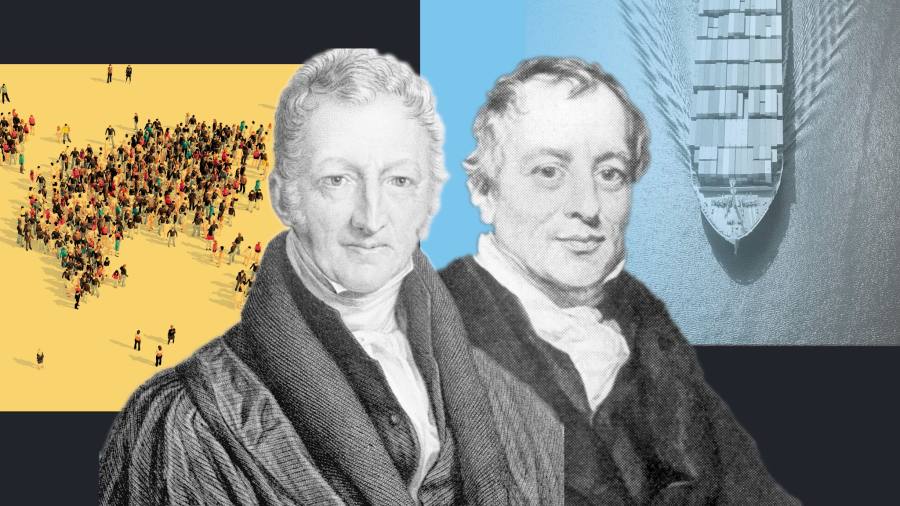 In 1821, James Mill, a Scottish historian, economist and philosopher, most famous for being the father of the great liberal philosopher and economist John Stuart Mill, founded the Political Economy Club, a private dining club in London. The club still exists 200 years later.

Among the founder members were two heavy hitters in the history of economics, Thomas Malthus and David Ricardo. Malthus was a pessimist, arguing that population would ultimately outrun increases in production. Ricardo is best known for inventing what we now call the theory of comparative advantage in trade.

The club decided to create an essay prize in honour of its bicentenary, in collaboration with the Financial Times. It offered two titles from which candidates could choose:

1. How relevant are the ideas of Malthus and Ricardo respectively to today’s issues of climate change (is this an example of Malthusian limits) and of limits to markets (is globalisation with free trade and free capital movements an unmixed blessing)?

2. With UK real income per head up 15 times over the past 200 years and more evenly distributed, will this be repeated over the next 200 years — and if not, why?

There were 45 submissions. The judges (of whom I was one) agreed unanimously that the two essays we are publishing were the best argued and most original.

By happy chance, the authors also wrote on different questions. Joe Spearing explores the first question, coming to the conclusion that markets have not only practical, but also ethical, limits as tools for addressing climate change. Krzysztof Pelc addresses the second question, arguing that limits to growth do indeed exist, but these come not from supply, as Malthus (and Malthusians) suggested, but rather from satiation of demand.

It is impossible to guess what Malthus and Ricardo would have made of these arguments. I hope they would have concluded that political economy remains vital, for these thought-provoking essays are in that intellectual tradition.