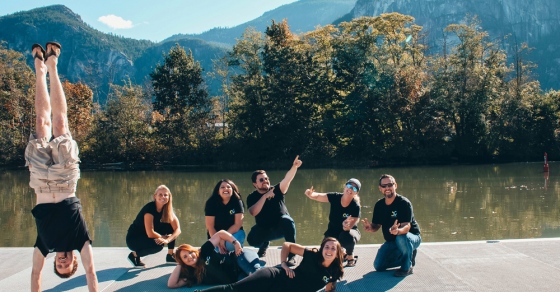 It’s no secret that Squamish makes for a great location to shoot film, and one company knows it.

Blue River Canada is a media production company that set up shop here in town in July, and they’re now ready to give the community a chance to get familiar with them.

The company employs a team of nine in Squamish.

The outfit has a number of film projects on the go, shooting films for Amazon Prime and Netflix, as well as commercials.

There are also more community-minded projects that the team is considering, like a tribute film for Mikayla Martin, a star skier and mountain biker who died last year in an accident.

April Chandler, the founder of the company, has 11 producer credits on IMDb.com for various documentaries, TV series and video shorts.

She immigrated to the United States in 2001 where she began her career as a personal growth and self-help non-fiction author and coach to actors and professional athletes, her IMDb.com biography states.

Then she became an executive producer and raised money for film productions.

After years living in Los Angeles, Chandler headed north and set up Blue River in Squamish. She is a director, producer and can pilot a drone as well.

The pair touted affordable rates for small businesses and added they wanted to reach out the Squamish community to make their film ideas come to life.

But that’s not the only service the company is aiming to provide.

Musicians and podcast aficionados can rejoice in having professional recording studio spaces, as Blue River is aiming to have three of them available to book.

Blue River’s production space features some artwork by local artist Mehran “Raz” Razmpoosh, with images of the Stawamus Chief, Mount Garibaldi and Shannon Falls, so people can still have a view of the great outdoors, even from inside.

O’Connor and Bulford said down the line, the company hopes to also have bookings available for video production space as well. 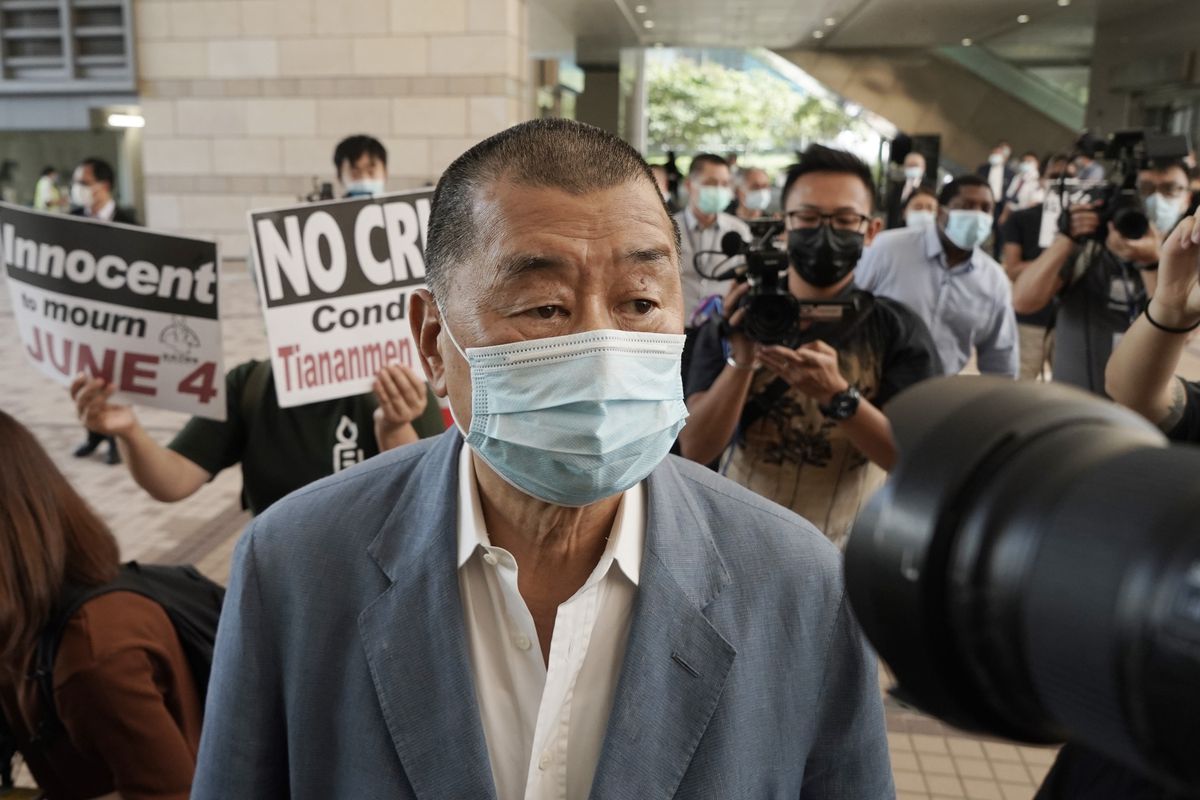 Outspoken Hong Kong pro-democracy advocate and media tycoon Jimmy Lai was refused bail on Thursday on a fraud charge amid a growing crackdown on dissent in the semi-autonomous city.

Jimmy Lai of Next Digital, which publishes the Apple Daily newspaper, was among 10 people arrested Aug. 10 on what police said was suspicion of violating a national security law and collusion with a foreign country.

Lai, 73, was later released on bail but police raided his company’s offices in October and took away documents.

On Wednesday, Lai and two Next Digital executives were charged with fraud over accusations that they violated lease terms for Next Digital office space.

Lai appeared in court Thursday and was denied bail. His case has been adjourned till April 16.

Hong Kong police said in a statement Wednesday that it had arrested three men on charges of fraud, without naming them. It also said that one of them had been suspected of violating the national security law, and that it was still under investigation.

Beijing imposed the national security law in response to protests in Hong Kong that began in June 2019 over a proposed extradition law and expanded to include demands for greater democracy in the former British colony.

The sweeping legislation prompted more public protests and led to complaints that Beijing is violating the autonomy promised to Hong Kong when it returned to China and damaging its status as a business centre.

Apple Daily criticized the law on its front page on July 1, calling it the “final nail in the coffin” of the territory’s autonomy.

The British government had slammed Lai’s August arrest and said the security law was being used to crush dissent.

The law is “being implemented in a way that undermines freedom of speech,” the British government said in a report this month on the status of the 1984 agreement for Hong Kong’s return to China.

“It is imperative that this freedom is fully respected,” the report said.

Lai was earlier arrested in February and April on charges of taking part in unauthorized protests. He also faces charges of joining an unauthorized vigil marking the anniversary of the June 4, 1989, crackdown on pro-democracy protests in Beijing’s Tiananmen Square.

SEOUL (Reuters) – South Korea has reached a deal with AstraZeneca PLC to purchase its coronavirus vaccine candidate as it seeks to secure supplies amid a resurgence of outbreaks, local media reported on Thursday.

The government has said it was in final talks with global drugmakers including AstraZeneca, Pfizer Inc and Johnson & Johnson over their experimental vaccines, and launched a preliminary review of AstraZeneca’s product in October for potential fast-track approval.

The JoongAng Ilbo newspaper said health authorities signed a contract with the Britain-based company on Nov. 27, and were nearing agreements with Pfizer and Johnson & Johnson, citing an unidentified government official.

“The AstraZeneca deal has been done, and a memorandum of understanding was reached with both Pfizer and Johnson & Johnson. But further negotiations are needed to finalise the amount of supplies and the timing of shipment,” the official was quoted as saying.

The Yonhap news agency also reported, citing an unnamed health official, that an agreement with AstraZeneca was inked recently and the government would make an announcement as early as next week after completing negotiations with other firms.

The Korea Disease Control and Prevention Agency (KDCA) said that the JoongAng report was not the government’s official position but that it would finalise talks and unveil comprehensive results shortly.

The KDCA has said 172 billion won ($157 million) was set aside to buy an initial 60 million doses this year, enough to vaccinate about 60% of the country’s population of 52 million, around the second quarter of 2021.

It has secured 20 million doses via the COVAX facility, an international COVID-19 vaccine allocation platform co-led by the WHO.

HONG KONG (Reuters) – Hong Kong media tycoon and pro-democracy activist Jimmy Lai was denied bail on Thursday on a charge of fraud related to the lease of a building that houses his Apple Daily, an anti-government tabloid.

Authorities have intensified a crackdown on key opposition figures in the Chinese-ruled city since Beijing circumvented the local legislature and imposed sweeping national security legislation on the global financial centre on June 30.

While Lai’s fraud charge did not fall under the national security law, it marks the latest crackdown on pro-democracy figures in the former British colony, which was handed back to Beijing in 1997 with a promise to maintain the free-wheeling city’s way of life for 50 years.

On Wednesday, one of Hong Kong’s most prominent democracy activists Joshua Wong was jailed for more than 13 months for his role in an unlawful anti-government rally in 2019, the toughest and most high-profile sentencing of an opposition figure this year.

Lai, 73, and two senior executives of his company Next Digital, were charged on Wednesday on suspicion of concealing from and falsely representing the use of their office to their landlord, a public corporation set up by the Hong Kong government.

The charge stated they were not using the office space as permitted under the lease between 2016 to 2020, and had sub-let a part of the premises, resulting in benefits to Apple Daily.

Reuters was not immediately able to reach Lai or his lawyers for comment. Next Digital suspended trading on Thursday morning, pending an announcement containing “inside information”.

“This is about dirtying Jimmy up. It’s Beijing’s policing brought to Hong Kong,” Mark Simon, an associate of Lai, told Reuters.

An ardent critic of Beijing, Lai has been detained since Wednesday after reporting to the police for his arrest in August. Prosecutors applied to adjourn the case until April next year, according to local media.

In August, Lai was arrested after about 200 police officers swooped on his offices. Hong Kong police later said they had arrested nine men and one woman for suspected offences including “collusion with a foreign country/external elements to endanger national security, conspiracy to defraud” and others.

Suspicion of colluding with foreign forces carries a maximum sentence of life in jail under the new security law.

Lai has been a frequent visitor to Washington, where he has met officials, including U.S. Secretary of State Mike Pompeo, to rally support for Hong Kong democracy, prompting Beijing to label him a “traitor”.

The security law was introduced on June 30 and punishes anything China considers subversion, secession, terrorism or collusion with foreign forces with up to life in prison.