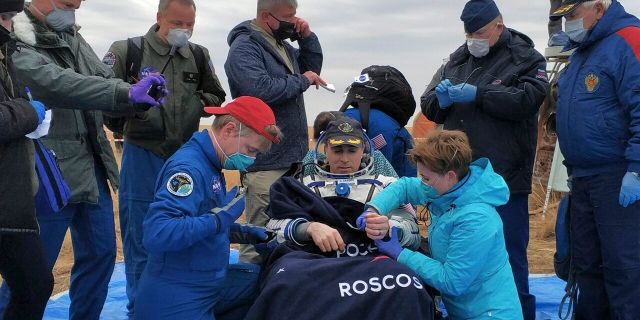 MOSCOW – A trio of space travelers safely returned to Earth on Thursday after a six-month mission on the International Space Station.

The Soyuz MS-16 capsule carrying NASA astronaut Chris Cassidy, and Roscosmos’ Anatoly Ivanishin and Ivan Vagner landed on the steppes of Kazakhstan southeast of the town of Dzhezkazgan at 7:54 a.m. (2:54 GMT) Thursday.

After a brief medical checkup, the three will be taken by helicopters to Dzhezkazgan from where they will depart home.

Cassidy will board a NASA plane back to Houston, while Vagner and Ivanishin will fly home to Star City, Russia.

In this photo released by Rosaviatsiya, NASA astronaut Chris Cassidy sits in a chair shortly after the landing near town of Dzhezkazgan, Kazakhstan, Thursday, Oct. 22, 2020.
(Rosaviatsiya via AP)

The crew smiled as they talked to masked members of the recovery team, and NASA and Roscosmos reported that they were in good condition. 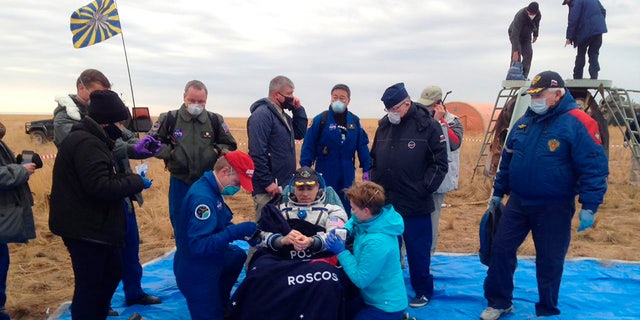 As part of additional precautions due to the coronavirus, the rescue team members meeting the crew were tested for the virus and the number of people involved in the recovery effort was limited.

Cassidy, Ivanishin and Vagner spent 196 days in orbit, having arrived at the station on April 9. They left behind NASA’s Kate Rubins and Roscosmos’ Sergey Ryzhikov and Sergey Kud-Sverchkov, who arrived at the orbiting outpost a week ago for a six-month stay. 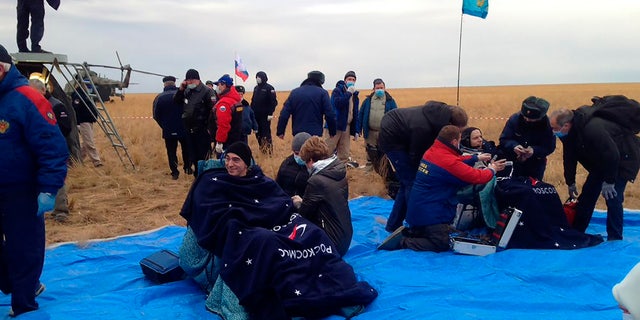 Cassidy, returning from his third space mission, has now spent a total of 378 days in space, the fifth highest among U.S. astronauts.

While serving as the station’s commander, Cassidy welcomed SpaceX Demo-2 crew Robert Behnken and Douglas Hurley, the first NASA astronauts to launch to the space station on an American spacecraft from American soil since the retirement of the space shuttle fleet in 2011. 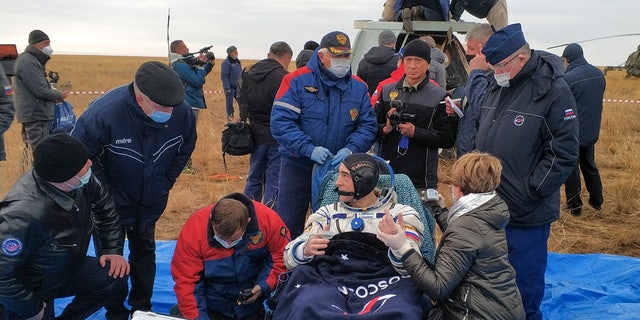 In this photo released by Rosaviatsiya, Roscosmos’ cosmonaut Anatoly Ivanishin sits in a chair shortly after the landing near town of Dzhezkazgan, Kazakhstan, Thursday, Oct. 22, 2020.
(Rosaviatsiya via AP)

Cassidy and Behnken completed four spacewalks for a total of 23 hours and 37 minutes, becoming two of only four U.S. astronauts to complete 10 spacewalks. 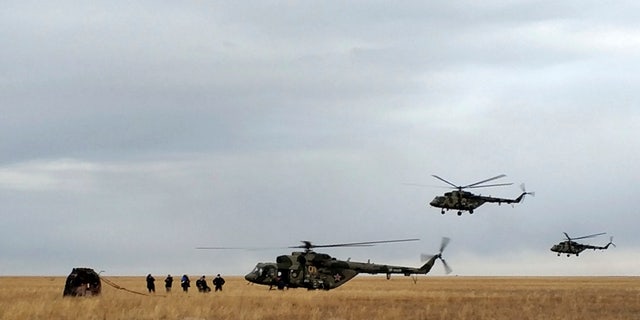 Before the crew’s departure, Russian cosmonauts were able to temporarily seal the air leak they tried to locate for several months. The small leak has posed no immediate danger to the station’s crew, and Roscosmos engineers have been working on a permanent seal. 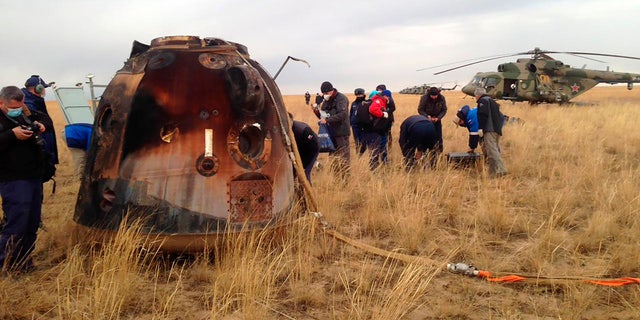 The Soyuz MS-16 capsule carrying NASA astronaut Chris Cassidy, and Roscosmos’ Anatoly Ivanishin and Ivan Vagner landed on the steppes of Kazakhstan, southeast of the town of Dzhezkazgan, on Thursday.
(Roscosmos Space Agency via AP)

Space: Astronauts uncovered a leak at the space station ISS with a tea bag – three are back on earth – Pledge Times 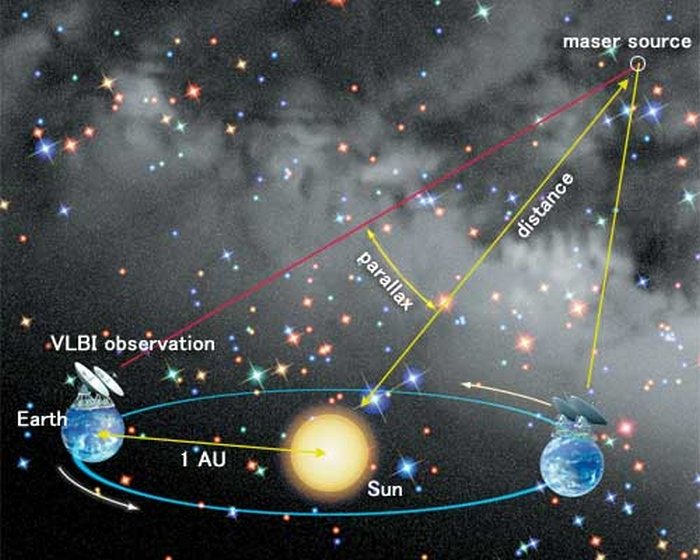 It seems that Earth has been misplaced.

According to a new map of the Milky Way galaxy, the Solar System’s position isn’t where we thought it was. Not only is it closer to the galactic centre – and the supermassive hole therein, Sagittarius A* – it’s orbiting at a faster clip.

It’s nothing to be concerned about; we’re not actually moving closer to Sgr A*, and we’re in no danger of being slurped up. Rather, our map of the Milky Way has been adjusted, more accurately identifying where we have been all along.

And the survey beautifully demonstrates how tricky it is to map a galaxy in three dimensions from inside it.

It’s a problem that has long devilled our understanding of space phenomena. It’s relatively easy to map the two-dimensional coordinates of stars and other cosmic objects, but the distances to those objects is a lot harder to figure out.

And distances are important – they help us determine the intrinsic brightness of objects. A good recent example of this is the red giant star Betelgeuse, which turned out to be closer to Earth than previous measurements suggested. This means that it’s neither as large nor as bright as we thought.

Another is the object CK Vulpeculae, a star that exploded 350 years ago. It’s actually much farther away, which means that the explosion was brighter and more energetic, and requires a new explanation, since previous analyses were performed under the assumption it was relatively low energy.

But we’re getting better at calculating those distances, with surveys using the best available technology and techniques working hard to refine our three-dimensional maps of the Milky Way, a field known as astrometry. And one of these is the VERA radio astronomy survey, conducted by the Japanese VERA collaboration.

VERA stands for VLBI (Very Long Baseline Interferometry) Exploration of Radio Astrometry, and it uses a number of radio telescopes across the Japanese archipelago, combining their data to effectively produce the same resolution as a telescope with a 2,300 kilometre- (1,430 mile-) diameter dish. It’s the same principle behind the Event Horizon Telescope that produced our very first direct image of a black hole’s shadow.

VERA, which started observing in 2000, is designed to help us calculate the distances to radio-emitting stars by calculating their parallax. With its incredible resolution, it observes these stars for over a year, and watches how their position changes relative to stars that are much farther away as Earth orbits the Sun.

This change in position can then be used to calculate how far a star is from Earth, but not all parallax observations are created equal. VLBI can produce much higher resolution images; VERA has a breathtaking angular resolution of 10 millionths of an arcsecond, which is expected to produce extraordinarily high precision astrometry measurements.

And this is what astronomers have used to refine our Solar System’s position in the Milky Way. Based on the first VERA Astrometry Catalog of 99 objects released earlier this year, as well as other observations, astronomers created a position and velocity map of those objects.

From this map, they calculated the position of the galactic centre.

In 1985, the International Astronomical Union defined the distance to the galactic centre as 27,700 light-years. Last year, the GRAVITY collaboration recalculated it and found it closer, just 26,673 light-years away. 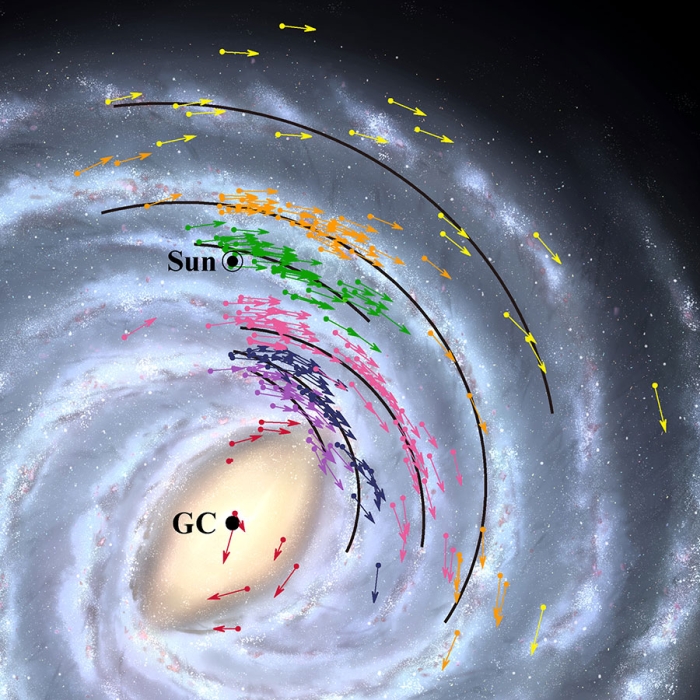 That change may not seem like much, but it could have an impact on how we measure and interpret activity in the galactic centre – ultimately, hopefully, leading to a more accurate picture of the complex interactions around Sgr A*.

Meanwhile, the VERA collaboration is forging ahead. Not only is it continuing to make observations of objects in the Milky Way, it’s joining up with an even larger project, the East Asian VLBI Network. Together, astronomers hope, the telescopes involved in this project could provide measurements of unprecedented accuracy.

The Vera Astrometry Catalog was published in the Publications of the Astronomical Society of Japan.

At the center of the our galaxy there’s a supermassive black hole called Sagittarius A*. It has a mass roughly 4 million times that of our sun.

Great news! It turns out scientists have discovered that we’re 2,000 light-years closer to Sagittarius A* than we thought.

This doesn’t mean we’re currently on a collision course with a black hole. No, it’s simply the result of a more accurate model of the Milky Way based on new data.

From the cosmos to your inbox. Get the latest space stories from CNET every week.

Over the last 15 years, a Japanese radio astronomy project, VERA, has been gathering data. Using a technique called interferometry, VERA gathered data from telescopes across Japan and combined them with data from other existing projects to create what is essentially the most accurate map of the Milky Way yet.

By pinpointing the location and velocity of around 99 specific points in our galaxy, VERA has concluded that the supermassive black hole Sagittarius A, at the center of our galaxy, is actually 25,800 light-years from Earth — almost 2,000 light-years closer than what we previously believed.

VERA is now hoping to increase the accuracy of its model by increasing the amount of points it’s gathering data from by expanding into EAVN (East Asian VLBI Network) and gathering data from a larger suite of radio telescopes located throughout Japan, Korea and China.