After 25 days in deep space, the Artemis 1 mission to the Moon has returned home a success!

At roughly 12:40 p.m. EST, on Sunday, December 11, NASA’s Orion spacecraft slashed down off the coast of Baja California, marking the successful end to the Artemis 1 mission.

“The splashdown of the Orion spacecraft – which occurred 50 years to the day of the Apollo 17 Moon landing – is the crowning achievement of Artemis I,” NASA Administrator Bill Nelson said in a press release on Sunday.

This image of Orion’s splashdown was captured from the USS Portland, a San Antonio-class amphibious transport dock ship that was stationed at the splashdown site to retrieve the capsule. Credit: NASA

“From the launch of the world’s most powerful rocket to the exceptional journey around the Moon and back to Earth, this flight test is a major step forward in the Artemis Generation of lunar exploration,” Nelson stated. “It wouldn’t be possible without the incredible NASA team. For years, thousands of individuals have poured themselves into this mission, which is inspiring the world to work together to reach untouched cosmic shores. Today is a huge win for NASA, the United States, our international partners, and all of humanity.”

Despite numerous launch delays due to weather and technical problems with the Space Launch System rocket, once the Artemis 1 mission actually got off the ground, it appeared to go flawlessly.

Unlike previous missions which have only featured periodic updates, NASA took the entire world along on this 25-day trip around the Moon and back, via a continuous live-feed streamed by the Orion spacecraft.

Along the way, we were treated to: 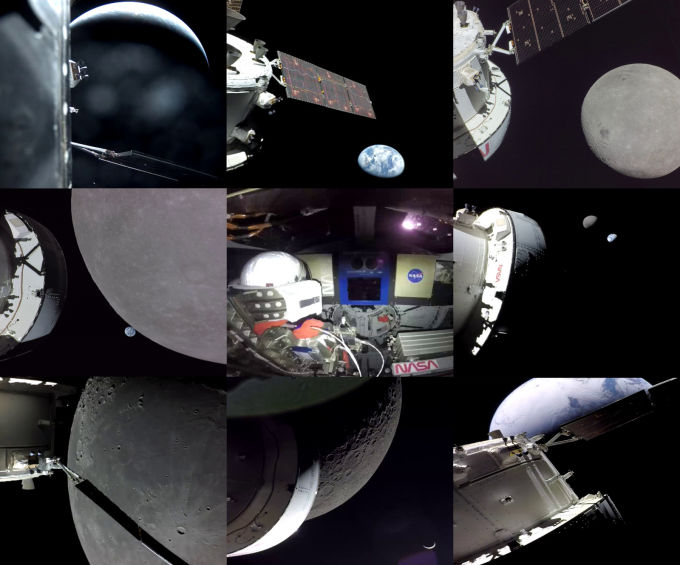 This collage features views from Orion’s live feed during the mission. Top row (l-r): Earth on departure, Earth and one of the spacecraft’s solar panels, the first closeup of the Moon featuring Hertzsprung crater. Middle row (l-r): Earthset, the interior of the Orion capsule, the Moon and Earth from 432,210 km away. Bottom row (l-r): the Moon’s cratered surface during the second flyby (featuring what is likely Kepler crater, bottom right), crescent Earthrise, and Earth as the spacecraft approached home. Credit: NASA

According to NASA, Orion passed within 128 km of the Moon’s surface during its two flybys. The spacecraft also reached a total distance of 432,210 km away from Earth, over 1,000 times farther than the International Space Station. This sets a new record for distance reached by a human-rated spacecraft, beating the previous record of 400,171 km, set on April 14, 1970, by the Apollo 13 mission.

The purpose of this uncrewed flight was to test the various systems needed to return humanity to the Moon, and to eventually go beyond. With the Orion capsule now returned to land, it will undergo months of testing to determine how well it endured in deep space. The various science experiments on the spacecraft will also be examined, which will reveal the stresses a human crew would have experienced on the flight. 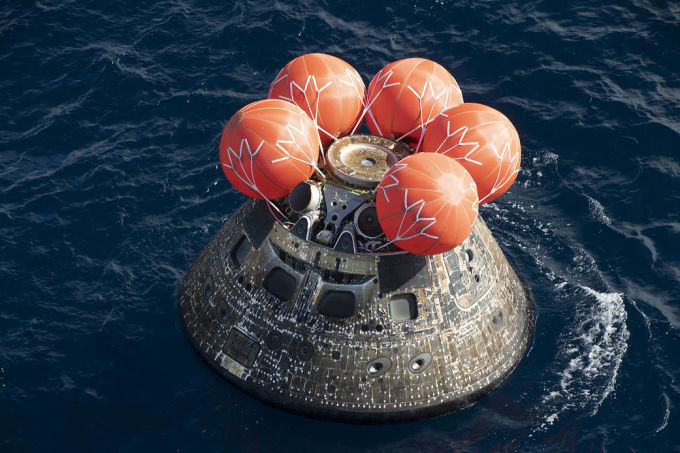 The Orion capsule floats in the waters of the Pacific Ocean, off the coast of Baja California, on Dec. 11, 2022, before being recovered by the USS Portland. Credit: NASA/James M. Blair

“With Orion safely returned to Earth we can begin to see our next mission on the horizon which will fly crew to the Moon for the first time as a part of the next era of exploration,” Jim Free, NASA’s associate administrator for the Exploration Systems Development Mission Directorate, said on Sunday. “This begins our path to a regular cadence of missions and a sustained human presence at the Moon for scientific discovery and to prepare for human missions to Mars.”

Here’s how to watch the Geminid meteor shower

An asteroid the size of a delivery truck will whip past Earth on Thursday night, one of the closest such encounters ever recorded.

NASA insists it will be a near miss with no chance of the asteroid hitting Earth.

The U.S. space agency said Wednesday that this newly discovered asteroid will zoom 3,600 kilometres above the southern tip of South America. That’s 10 times closer than the bevy of communication satellites circling overhead.

Even if the space rock came a lot closer, scientists said most of it would burn up in the atmosphere, with some of the bigger pieces possibly falling as meteorites.

“But despite the very few observations, it was nonetheless able to predict that the asteroid would make an extraordinarily close approach with Earth,” Farnocchia said in a statement.

“In fact, this is one of the closest approaches by a known near-Earth object ever recorded.”

Discovered Saturday, the asteroid known as 2023 BU is believed to be 3.5 to 8.5 metres across.

It was first spotted by Gennady Borisov, the same amateur astronomer in Crimea who discovered an interstellar comet in 2019.

Within a few days, dozens of observations were made by astronomers around the world, allowing them to refine the asteroid’s orbit.

The asteroid’s path will be drastically altered by Earth’s gravity once it zips by. Instead of circling the sun every 359 days, it will move into an oval orbit lasting 425 days, according to NASA.

The United States plans to test a spacecraft engine powered by nuclear fission by 2027 as part of a long-term NASA effort to demonstrate more efficient methods of propelling astronauts to Mars in the future, the space agency’s chief said on Tuesday.

NASA will partner with the U.S. military’s research and development agency, DARPA, to develop a nuclear thermal propulsion engine and launch it to space “as soon as 2027,” NASA administrator Bill Nelson said during a conference in National Harbor, Maryland.

The U.S. space agency has studied for decades the concept of nuclear thermal propulsion, which introduces heat from a nuclear fission reactor to a hydrogen propellant in order to provide a thrust believed to be far more efficient than traditional chemical-based rocket engines.

NASA officials view nuclear thermal propulsion as crucial for sending humans beyond the moon and deeper into space. A trip to Mars from Earth using the technology could take roughly four months instead of some nine months with a conventional, chemically powered engine, engineers say.

That would substantially reduce the time astronauts would be exposed to deep-space radiation and would also require fewer supplies, such as food and other cargo, during a trip to Mars.

“If we have swifter trips for humans, they are safer trips,” NASA deputy administrator and former astronaut Pam Melroy said Tuesday.

The planned 2027 demonstration, part of an existing DARPA research program that NASA is now joining, could also inform the ambitions of the U.S. Space Force, which has envisioned deploying nuclear reactor-powered spacecraft capable of moving other satellites orbiting near the moon, DARPA and NASA officials said.

DARPA in 2021 awarded funds to General Atomics, Lockheed Martin and Jeff Bezos’ space company Blue Origin to study designs of nuclear reactors and spacecraft. By around March, the agency will pick a company to build the nuclear spacecraft for the 2027 demonstration, the program’s manager Tabitha Dodson said in an interview.

The joint NASA-DARPA effort’s budget is US$110 million for fiscal year 2023 and is expected to be hundreds of millions of dollars more through 2027.

The green comet ZTF returns to the solar system 50,000 years later… and it will be visible from Earth

For astronomy enthusiasts, February 1 is marked in red on their calendars. The reason: it is not every day that there is a chance to see a green comet.

In fact, it is the first time in 50,000 years that C/2022 ZTF will return to the solar system. And it will be early next month when it will reach its closest position to Earth.

Specifically, the green comet ZTF will pass 42 million light years from our planet. Experts are not 100 percent sure whether it will be visible from the surface without the use of any instrument. However, if we have specific astronomy binoculars or telescopes, we will be able to see it without any problem.

As usually happens in these cases, the best places to observe the comet, this one or any other, are places with little artificial light. That is to say, we should move away from urban centres and it is preferable to do so in the hours before dawn.

Why is comet ZTF green?

Comet ZTF has a brightness and a colour that, although not unique, is clearly distinctive. Its hue is due to the fact that it is composed, among other materials, of diatomic carbon.

When it comes into contact with sunlight, the decomposition of this element causes the gas to acquire this spectacular colour.

Comet ZTF was discovered in March 2022

Frank Masci and Bryce Bolin of the Palomar Observatory in California were responsible for spotting the striking comet ZTF in the sky. It is so named because its discovery is part of the Zwicky Transient Facility surveillance programme, which uses the powerful Schmidt telescope at the facility.

Initially, the scientists responsible for the discovery thought it was an asteroid, but they quickly realised that this was not the case. Despite the striking colour of this comet, experts advise keeping expectations low. In any case, it is an event that has aroused great interest in the community.