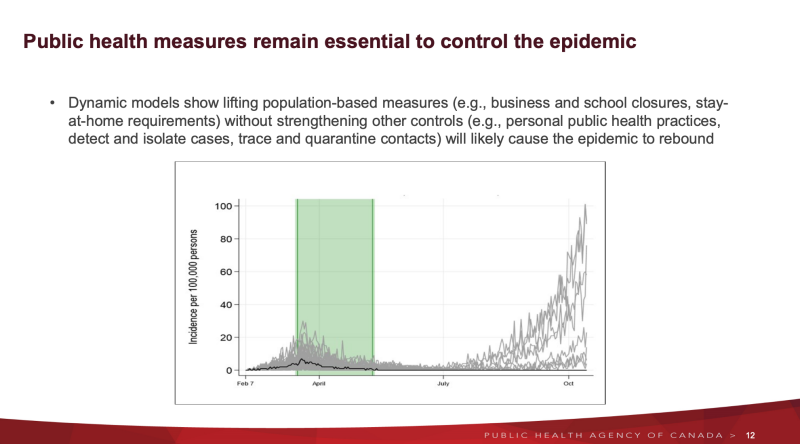 In the latest projections of COVID-19 in Canada, Dr. Theresa Tam, Canada’s chief public health officer, stressed the importance of identifying cases and tracing their close contacts as a way to keep the spread of the virus down in the future.

“The virus has not disappeared and resurgence can happen at any time or at any place,” Dr. Tam said. “We are on our way down the right side of the first peak.”

The quicker public health officials in Canada can identify COVID-19 cases and trace contacts, followed by self-isolation measures, the less likely it is that spread will occur, allowing Canadians to keep outbreaks down.

“As restrictive public health measures are being lifted…we expected to see some resurgence of cases,” Dr. Tam said.

Minimizing the number of close contacts each person has will also help maintain epidemic control. The more public health measures are in place and the few social spaces space people are in, the easier it will be to control the spread through contact tracing.

Most of the cases seen to date have been in Quebec and Ontario, primarily in the more populous areas of Toronto and Montreal. The data does show that Alberta, Saskatchewan and New Brunswick have seen a recent increase in cases, which exemplifies that resurgences can happen at any time, even if case numbers are relatively low.

P.E.I., the Yukon and Northwest Territories had no community spread of the virus, and Nunavut has not had any confirmed cases. Many of the outbreaks that have occurred have been in more vulnerable, crowded settings and lower income areas which show significant health disparities.

Earlier on in the pandemic, older Canadians made up a large portion of cases but more recently, with declines in long-term care and senior’s homes, people under the age of 40 now account for a greater number of infections.

Canada Day in Edmonton: What to do and how to celebrate safely amid COVID-19 – Globalnews.ca

Two weeks into Phase 3 of Manitoba’s reopening, new cases of COVID-19 in the province are at a steady trickle — but epidemiologists warn it could still roar into a flood if Manitobans don’t stay cautious.

“Don’t get complacent yet,” said Dr. Cynthia Carr, a Winnipeg-based epidemiologist and founder of EPI Research Inc. “It just takes one [case] to become an outbreak.”

It’s been roughly nine weeks since Manitoba set out on the first stage of a multi-phased plan to roll back pandemic restrictions on May 4.

Since then, Manitoba has identified 45 new cases of COVID-19. Twenty-seven of them have been in the Winnipeg health region, 10 in the Southern health region and eight in Prairie Mountain Health.

Some of those cases came in clusters, including a 10-case cluster at Brandon-based trucking company Paul’s Hauling. Four others were temporary foreign workers who lived and worked together in the Southern health region.

At least 14 of the cases were connected to the trucking industry, either working as truck drivers or close contacts of truckers who tested positive. That doesn’t include the Paul’s Hauling outbreak, where the province has yet to publicly announce how the first person got sick.

The apparently low number of community spread cases over the past couple of months is encouraging, but Manitobans shouldn’t breathe a sigh of relief yet, Carr says.

Manitoba’s low numbers are good for public health but pose a problem for experts or observers trying to interpret them, she said. When the overall numbers are so low, perceived patterns might just be flukes.

“Proportionally we could say … a high rate of them are related to [travel and contact with known cases]. But the reality is, you can see in other areas across the country and around the world where there’s more cases, there’s still general spread,” she said.

“We don’t want to get complacent and say, ‘OK, it’s the people travelling across country for their jobs that are at higher risk, and not the rest of us.'”

Through a peak, into a trough

Manitoba has identified 325 lab-confirmed positive and probable positive cases of COVID-19 since March 12, when the province announced its first three cases.

As of Friday, 16 of them were active. Seven Manitobans have died. A total of 302 have recovered.

It’s been more than a month since anyone was in hospital care for COVID-19, according to provincial data. The province’s weekly test positivity rate — the percentage of completed tests that came back as positive — has been below one per cent since early May.

As of July 3, the Public Health Agency of Canada reported Manitoba’s overall test positivity rate, since the start of the pandemic, at 0.2 per cent, compared to 0.8 per cent nationally.

The province has had a handful of promising streaks with no new cases. Twice, Manitoba went six days without announcing a single case — once in mid-May and once in mid-June — but still hasn’t hit a week-long streak of zeroes.

Dr. Jason Kindrachuk, an associate professor and Canada Research chair in emerging viruses at the University of Manitoba, says Manitoba’s success at controlling the virus shows how seriously Manitobans responded.

The province was also insulated by reduced international travel, he says, and less status as a tourism destination compared to some other Canadian provinces.

“We’ve kind of gone through that … first peak and we basically come back down into a bit of a trough,” he said.

“[But] we do still see cases popping up here and there. It gives us a bit of a red flag to say, ‘Yes, the virus is still out there.'”

Public health officials trying to urge caution face challenges, Carr says. The very nature of COVID-19, which has a relatively long incubation period — the interval between when someone is infected and when they show symptoms —  can create the impression that infection isn’t spreading, even when it is.

The public may also lose patience with following restrictive public health rules, she says, and low case numbers can build a false sense of safety.

“The World Health Organization has said this is one of the most dangerous times, because people get restless, they want to go outside,” Carr said. “They feel safer, because numbers seem to be dropping off and things are opening.”

“But you can’t conflate that with the virus not circulating in the population. It is still circulating and outbreaks can happen very quickly.”

Kindrachuk says it’s difficult for experts to give the public an idea of what to expect in the future, even the next couple of months. The virus is too, and the variables between different jurisdictions too great, to say for sure.

Ultimately, much of the province’s success will come down to Manitobans continuing to behave cautiously.

“If somebody tells you right now that they know what’s going to happen, they don’t,” Kindrachuk said.

“We have to assume that … we could potentially pass ourselves back in a situation like we saw before, and we want to do everything we can to try and control that.”

WINNIPEG —
For the fourth straight day, there are no new cases of COVID-19 in Manitoba.

Health officials announced on Saturday that as of 9:30 a.m., no new cases have been identified.

There have been 325 lab-confirmed and probable cases in the province since early March.

As of Friday, there are 16 active cases in Manitoba and 302 people have recovered from COVID-19. The death toll remains at seven.

Since early February, 64,968 tests have been performed.

The province will provide an update data on case numbers, active cases and recoveries on Monday.

WINNIPEG —
The Manitoba government has explained why health officials are notifying airline passengers about possible COVID-19 exposure, and not the airlines themselves.

In recent days, the province has advised passengers on three Air Canada flights to self-isolate and monitor for symptoms, as a recent positive case was a passenger on the flights.

The flights are listed below:

Health officials said those in the impacted rows are considered close contacts and are asked to self-isolate for 14 days and monitor for COVID-19 symptoms. Any other passengers on the flights are asked to monitor for symptoms.

Since the pandemic started, the provincial government has maintained a list of flights where passengers with confirmed cases of COVID-19 were on.

However, some have wondered why provincial health officials are providing the updates, instead of the airlines.

CTV News Winnipeg reached out to the Manitoba government for additional information on the process.

A provincial spokesperson said the plan to post information on flights publicly, instead of requesting flight manifests, was established early in the pandemic.

“There is no direct evidence at this time that contacting individual air travellers has made it possible to find cases earlier,” the spokesperson said in an email to CTV News. “All air travellers should be self-monitoring for symptoms post-travel.”

The spokesperson went on to add, “Flight manifests take time to retrieve and often do not have contact information for all travellers that allows public health to follow-up. Airlines do not contact air travellers about public health issues directly.”

The province said the process is consistent with national guidelines and said most jurisdictions in Canada will publicly post the flight information for COVID-19 cases.