OTTAWA —
Panda Game celebrations in Ottawa’s Sandy Hill neighbourhood ended with partygoers taking over a residential street, flipping a car and leaving a trail of garbage and debris.

Mayor Jim Watson says he is “absolutely disgusted” by the incidents, and Ottawa police say “several incidents of criminal behaviour” are under investigation after a large crowd gathered near the University of Ottawa campus late Saturday night.

Approximately 2,000 students descended on the neighbourhood at approximately 8 p.m. to celebrate the Gee-Gees victory over Carleton University in the annual football game Saturday afternoon.

Police say a car was overturned and one person was assaulted during the incident, while paramedics transported seven people to hospital.

CTV News Ottawa cameras were on the scene as a large street party took over Russell Avenue, between Somerset Street and Templeton Street at approximately 11:30 p.m.  The footage showed hundreds of people in the middle of the street, with some people jumping on an overturned vehicle.

As the crowd dispersed early Sunday morning, one witness told CTV News Ottawa, “Kids went crazy and they liked three flipped cars and were like partying on it.”

Ottawa police cruisers were on the scene to monitor the party and block off the road late Saturday night.

In a statement Sunday afternoon, police said investigators were looking into several incidents of criminal behaviour, and reviewing social media and video of the scene.

Ottawa police and bylaw increased patrols in Sandy Hill, Old Ottawa South and the Glebe, along with around TD Place, before and after the game on Saturday.

“The pre and post game events were very safe and did not disrupt the neighbourhood. However, just after 8 p.m., large crowds began to gather in Sandy Hill at multiple addresses,” said police.

“OPS redeployed a large number of officers and called out members of the Emergency Services Unit. The officers worked to control and manage the groups of people with partners from the RCMP, and City Bylaw, paramedics and Ottawa Fire Services.”

Police say in some cases, the crowds became “very disruptive” in the area of Russell Avenue.

“In one incident, a car was overturned and a person was assaulted. Police are reviewing evidence and will be laying any applicable charges under the Reopening of Ontario Act, Liquor Licence Act, City By-laws as well as any criminal charges under the Criminal Code of Canada,” said police on Sunday afternoon.

“These behaviours are unacceptable and will not be tolerated. Investigators have been assigned to identify anyone who committed crimes. The OPS will also work with the University of Ottawa and Carleton University staff where students from those were involved in these behaviours.”

As of 1 p.m. Sunday, no one had been charged in connection to the incidents. 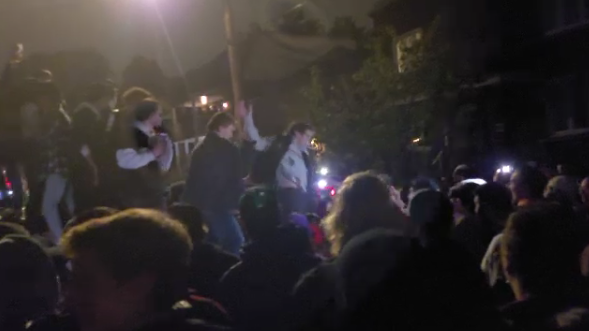 Mayor Watson says he has spoken to Ottawa Police Chief Peter Sloly about the incident, and several investigations are underway.

“I am absolutely disgusted by the behaviour of those involved in the unruly party on Russell Avenue following yesterday’s Panda Game,” said Watson on Twitter Sunday morning..

“Individuals, including police officers, were injured and private and public property was damaged.”

The mayor added the behaviour by some of the students is “completely unacceptable.”

“Those involved should be ashamed of their idiotic and immature behaviour,” said Watson.

“The vast majority of students enjoyed the pre-game activities as well as the game itself. Regrettably, post-game events in Sandy Hill were destructive, especially as we continue our fight against COVID-19.”

I’ve spoken to the Chief of Police and OPS is now conducting several investigations to ensure those responsible are dealt with in the judicial system. This kind of behaviour is completely unacceptable, and those
involved should be ashamed of their idiotic & immature behaviour.2/

A photo posted on social media at 1 a.m. showed a car flipped over and damaged in the middle of Russell Avenue, while garbage littered the street.

Steve Higham posted a video on Twitter showing thousands of people on Russell Avenue, saying it was “Roughly three hours before the cops made their presence known.”

In a statement on Twitter, Fleury called the events Saturday night “deplorable and unacceptable.”

“I encourage all authorities to investigate fully; press charges and fines to organisers and those who participated,” said Fleury Sunday afternoon. “Such hooliganism is selfish, puts the community at risk, and cannot go with on without consequences.”

In the days leading up to the Panda Game, police, bylaw services and both the University of Ottawa and Carleton University urged students to be good neighbours during the Panda Game weekend.

A volunteer clean-up patrol will be deployed in the neighbourhood at 11 a.m. Sunday.

The University of Ottawa Gee-Gees beat the Carleton Ravens 19-17 to win the 52nd Panda Game at TD Place.

This is a developing story. CTV News Ottawa will have the latest as it becomes available.

MONTREAL — The Montreal Alouettes announced on Sunday that the team has acquired veteran quarterback Trevor Harris from the Edmonton Elks in exchange for American defensive end Antonio Simmons.

Harris (six-foot-three, 212 pounds) is in his ninth season in the CFL after playing in Toronto, Ottawa and Edmonton. In 139 career games, he completed 1990 passes for 23,750 yards, adding 126 touchdown passes. The 35-year-old quarterback has hoisted the Grey Cup twice (2012, Toronto; 2016, Ottawa). The Waldo, OH native was selected on the East Division All-Star Team in 2016. The former Edinboro University Fighting Scots suited up for the Jacksonvile Jaguars in 2010 and the Buffalo Bills in 2011.

“Trevor is a veteran who knows the league well and what it takes to win”, said Montreal Alouettes General Manager Danny Maciocia. “We are pleased to have been able to complete this transaction. We are confident that Trevor will work well with our quarterbacks. We thank Antonio for his services and wish him well.”

In 23 career games with the Alouettes, Simmons made 52 defensive tackles, five quarterback sacks and forced a fumble.

Simmons is currently in his second CFL season and joins the Elks after originally signing with Montreal in May of 2019.

The Georgia Tech product played all 18 regular season games for the Als in 2019, recording 45 defensive tackles, three sacks, and a forced fumble. In five games this season, Simmons has registered seven defensive tackles and two sacks.

A native of Jacksonville, Florida, Simmons played four years (2014-17) at Georgia Tech, collecting 83 tackles, 16 tackles for loss, and seven quarterback sacks. He spent time in 2018 with both the Denver Broncos and Tampa Bay Buccaneers.

Andersson was fined the maximum allowable under the collective bargaining agreement between the NHL and the Players’ Association.

The money goes to the players’ emergency assistance fund.

Andersson was assessed minor penalties for both roughing and elbowing at 14:33 of the first period Saturday in Edmonton.

The Flames lost their season-opener 5-2 to the Oilers.

This report by The Canadian Press was first published Oct. 17, 2021.

The Toronto Maple Leafs are apparently planning to loosen up on dress code restrictions for players on game day.

Players are required to wear jackets, ties and dress pants to and from the arena, as outlined in the CBA, however, teams can ease up on the mandate if they choose.

The Arizona Coyotes were the only team that opted to do so entering the season, but the Maple Leafs now plan to follow suit, according to Lance Hornby of The Toronto Sun.

The Leaf players, in co-operation with management, are relaxing their dress code on game day. Matthews, a fashion plate, agreed ‘business casual’ was a good description.

The decision comes just a few days after ESPN published an article on Toronto Maple Leafs centre Auston Matthews, who has shown a flair for unique fashion while away from the arena, discussing his displeasure with the NHL’s strict dress code.

“I don’t mind wearing a suit, but it gets old pretty quick,” Matthews said. “I think it’d be fun to wear different things and be able to express yourself, similar to what the NBA does or even the NFL a little bit.”

The 24-year-old Matthews, who led the NHL with 41 goals in 52 games last season, missed the first three games of the season while recovering from wrist surgery and is expected to make his 2021-22 debut Monday night against the New York Rangers on Sportsnet.