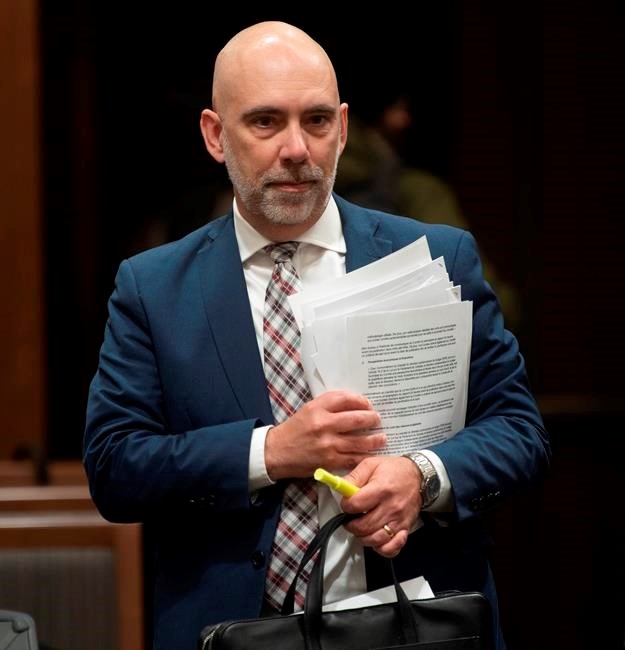 Parliament’s budget watchdog says a federal infrastructure financing agency has yet to meet a key aspect of its mandate: pulling in private dollars for major projects.

The Trudeau Liberals created the infrastructure agency in 2017 to use $35 billion in federal financing to pull in two or three times that in private dollars.

What the Liberals wanted was to finance projects that would generate revenue, meaning there could be a return to investors, to free up grant money for other work.

Parliamentary budget officer Yves Giroux wrote in a report released Tuesday that the Canada Infrastructure Bank has committed just over $4 billion for projects, or about 11.5 per cent of its spending envelope, but none involve funding from private investors.

Instead, the money from the bank is coming from other public-sector entities like municipal and provincial governments, as well as the Quebec pension plan.

Nor is it clear that private dollars are involved in any of the remaining 13 projects in which the agency is participating, Giroux wrote.

The PBO report says eight of the 13 projects have yet to announce a financial commitment and are currently under either a memorandum of understanding, in a project acceleration phase or receiving advisory services.

“Of the projects for which contracts have been signed, there is no evidence that any private investment has been leveraged,” Giroux wrote in the report.

The Réseau express métropolitain, Montreal’s electric-rail system better known by its acronym REM, and an expansion of the GO Transit network in the Toronto area comprise most of the announced capital investment at the CIB at $1.28 billion and $2 billion, respectively, the PBO report says.

The report landed hours before Giroux and the agency’s chief executive, Ehren Cory, are scheduled to appear before a parliamentary committee probing the four-year-old agency.

Cory’s appointment was one of several the Liberals have made over the last six months after years of criticism that the bank was too slow to approve financing, and projects too marginal to lure big investors.

The government has redone the marching orders for the agency to get shovels in the ground, trying to stimulate the economy out of the pandemic.

In a recent interview with The Canadian Press, Cory said the agency had a short runway to prove its worth — a nod to the political spotlight the agency is under.

The Conservatives and New Democrats have previously promised to dismantle the agency if elected to govern.

Cory said internal changes at the agency to speed up reviews should put the bank on pace by the summer to have made 10 or so investments, he said, with a value of about $2.5 billion in CIB capital, and $6 billion in total project value.

Giroux’s report notes that the CIB has received 420 project proposals, but four-fifths have been rejected or are no longer under active consideration.

Nearly half of those rejected fell outside the agency’s mandate, the PBO report says, largely because they either were in an ineligible sector, were insufficient size, or lacked scalability.

The remaining rejected projects passed the agency’s initial screening criteria, but were removed from consideration or are no longer under active consideration, the PBO said.

Nicholas Kyriacopoulos: How to invest properly in 2021 and beyond – mtltimes.ca

Entrepreneurs like Nicholas Kyriacopoulos know the importance of how to invest during uncertain times, and it would be fair to say that the last year or so has had a few surprises for everyone following investment markets. While this change and volatility can be very profitable for those who make the right decisions, it also makes those right decisions harder to discern.

The fundamentals of good investment have not changed, however, and will continue to help investors in the future:

Keeping it simple is a good rule for many areas in life, and investment is definitely one of them.

How much time do you really want to spend managing your investment portfolio, and what kind of returns would make that commitment worth it to you?

If your investment portfolio takes careful attention and management to work, you need to be prepared to give it the time it needs. Keeping a simpler portfolio that doesn’t need as much attention paid to it can be a better option for people who have limited time to spend on their investment decisions.

That doesn’t mean you should necessarily take a ‘set it and forget it’ approach to investment, but absolutely consider the additional time commitment and stress of each potential investment and whether it is worth your time.

Diversification improves reliability and reduces the risk of just about every investment portfolio. Your investments should always be varied enough that even when a few of your investments are in a slump, you will still have enough winners to make a minimum return.

Many entrepreneurs like Nicholas Kyriacopoulos from Toronto recommend holding a variety of asset types as well as stocks. For example, consider bonds and real estate as part of your overall portfolio; make sure you have stocks associated with several different industries.

According to Nicholas Kyriacopoulos, be open to the concept of rebalancing. As market conditions changes, look to shift your portfolio away from investments that with less promising prospects and up your investments in markets that look ready to rise.

Nicholas Kyriacopoulos gives a simple example of rebalancing from the latter half of 2020. While oil prices were not looking great for most of the year, there were signs of incoming change. As a result, some investors sold oil assets over the summer and later purchase oil stocks. They then saw great returns when the stocks surged in November.

As an experienced investor in Toronto, Nicholas Kyriacopoulos advises careful consideration of your current situation and future financial goals. For the most part, this is about the amount of risk you can take on and your ability to recover if an investment doesn’t go your way.

If you still have decades left to work and rebuild, you can afford to take more risks than if you are approaching retirement and are looking for holdings you can rely on for a long time.

Nicholas Kyriacopoulos observes that besides your current situation, you also need to think about long-term goals. Where do you want to be in five, ten, or twenty years, and what can you do along the way to ensure your investment takes you in the right direction? Setting goals and having plans is just as important in 2021 as it has always been.

As Nicholas Kyriacopoulos, investing does involve risk and it sometimes means going with what you feel deep in your gut. While your decisions should always be backed by data and analysis of the market, following your instincts make it easier to have confidence in your decisions.

Your instincts can come about as a result of noticing minor details others are not noticing. If the feeling is strong enough, take the risk.

Other articles from mtltimes.ca – totimes.ca – otttimes.ca

October is Investor Education Month, and the Financial and Consumer Services Commission (FCNB) is using the time to encourage New Brunswickers to think about investment opportunities.

“(As well), to understand their investment decisions, implications of them, and their responsibilities in the decision-making process, and particularly now with new online ways to investing,” said Marissa Sollows, director of education and communications for FCNB.

Sollows mentioned, FCNB has noticed over the years New Brunswickers are becoming more comfortable with investing.

“And as it becomes more accessible to people, we are seeing more New Brunswickers starting to put money away for their future, so that’s positive.”

The majority of New Brunswickers are investing in mutual funds, which is the most common product that investors hold.

“It could be due to increased media, or an increased use of social media coverage that they’re being exposed to investing topics, and wanting to get in and try a little bit earlier … and there are new trends that are becoming more popular with younger investors like DIY investing and using different online tools and apps,” said Sollows.

Sollows encourages new investors to meet with a registered investment professional and added the future looks quite exciting but will also present some challenges.

Throughout the month, FCNB will provide investor guides, videos, and social media posts on how to be an informed investor.

At any time of year, New Brunswickers can turn to the commission’s website for unbiased investor and consumer tools and information.

Bitcoin hit $60,000 for the first time in six months on Friday, nearing its all-time high, as hopes grew that U.S. regulators would allow a futures-based exchange-traded fund (ETF), a move likely to open the path to wider investment in digital assets.

Cryptocurrency investors have been waiting for approval of the first U.S.  ETF for Bitcoin , with bets on such a move fuelling its recent rally.

Such a move would open a new path for investors to gain exposure to the emerging asset, traders and analysts said.

“ETFs open up a raft of avenues for people to gain exposure, and there will be a swift move to these structures,” said Charles Hayter, CEO of data firm CryptoCompare, which tracks ETF products.

“It reduces the frictions for investors to gain exposure and gives traditional funds room to use the asset for diversification purposes.”

Bitcoin’s moves on Friday were spurred by a tweet from the SEC’s investor education office urging investors to weigh risks and benefits of investing in funds that holds bitcoin futures contracts, said Ben Caselin of Asia-based crypto exchange AAX.

Graphic: Bitcoin on the rise https://fingfx.thomsonreuters.com/gfx/mkt/movanjqkapa/bitcoin.PNG

Crypto ETFs have launched this year in Canada and Europe, growing in popularity amid surging interest in digital assets.

SEC Chair Gary Gensler has previously said the crypto market involves many tokens which may be unregistered securities and leaves prices open to manipulation and millions of investors vulnerable to risks.

Citing people familiar with the matter, the Bloomberg report said proposals by ProShares and Invesco, based on futures contracts, were filed under mutual fund rules that Gensler has said provide “significant investor protections”.

The SEC did not immediately respond to a request for comment on the report.

“It’s one of the final frontiers for mandate access,” said Joseph Edwards, head of research at crypto broker Enigma Securities.

“Plenty of Americans in particular have strings attached to how they deploy a lot of their wealth. It allows bitcoin to get in on the sorts of windfall that keep U.S. equities as consistently strong as they are.”

(Reporting by Tom Wilson in London and Alun John in Hong Kong, and Mrinmay Dey and Shubham Kalia in Bengaluru; editing by Alexander Smith and Jason Neely)

With average prices up another 14%, Swiss bank UBS warns of housing bubbles in Canada – CBC.ca