Martin Shkreli was also ordered to pay $64m in damages for monopolizing the market for a life-saving drug.

By Erik Larson and Sebastian TongBloomberg

Martin Shkreli, the convicted “Pharma Bro” who was brought down by a 2015 drug-pricing scandal, was ordered to pay $64 million in damages for monopolizing the market for a life-saving drug.

Shkreli, the former chief executive officer of Vyera Pharmaceuticals LLC, was also banned for life from the pharmaceutical industry in the antitrust ruling Friday by U.S. District Judge Denise Cote in Manhattan.

New York Attorney General Letitia James, who filed the suit with six other states and the U.S. Federal Trade Commission, said in a statement that Shkreli was motivated by “envy” and “greed” when he decided to “illegally jack up the price of a life-saving drug as Americans’ lives hung in the balance.”

#BREAKING: Martin Shkreli is a ‘Pharma Bro’ no more. A court found that the former Vyera Pharma CEO illegally monopolized the market of the life-saving drug Daraprim.

The powerful don’t get to make their own rules, despite Shkreli thinking cash rules everything around him.

Shkreli is already serving a seven-year sentence for securities fraud committed while running two hedge funds, though the same drug – Daraprim – is at the center of both cases.

Vyera, then known as Turing Pharmaceuticals, was launched by Shkreli in 2015. That’s when he acquired Daraprim, a once-affordable anti-infective used to treat a sometimes-deadly parasitic infection, from the only existing supplier. Shkreli then raised the price from $17.50 to $750 per tablet.

Cote found that Shkreli made illegal agreements with generic drug makers to delay introduction of cheaper versions of the drug after he jacked up the price.

“Shkreli does not dispute that it was his intention to impede generic pharmaceutical companies from launching competitive products that would threaten the price of Daraprim,” the judge wrote. “The plaintiffs have shown that the restraints Vyera implemented succeeded in doing just that.”

Last month, Vyera and another former chief executive officer, Kevin Mulleady, agreed to pay as much as $40 million to resolve their involvement in the federal antitrust lawsuit filed by New York and other states.

(Updates with detail from the litigation)

Canadians will likely experience shortages of some food items and increased prices as the Omicron COVID-19 variant snags supply chains and a vaccine mandate takes effect for cross-border truckers, according to industry experts.

However, they say that Canadians should not worry about food availability and that no one needs to panic buy.

“There is food on the grocery shelves,” said Michelle Wasylyshen, spokesperson for the Retail Council of Canada, which represents big-box grocery stores in the country.

She said, though, that there could be shortages of certain products, such as soups, cereals, fresh fruits and vegetables, and meats.

Some Canadians may have noticed empty shelves recently, but Wasylyshen said that is a result of the winter storm that hit Canada over the previous week.

While weather plays a role in shipment delays, other, long-term issues still persist that has the retail council “concerned,” Wasylyshen said.

These include labour shortages from absenteeism and the Omicron COVID-19 wave, which has caused workers to have to isolate and impacted operations.

Fortunately, both British Columbia and Ontario have said that it appears the peak of the fifth wave of the pandemic has been reached, so more workers are expected to return, Wasylyshen said.

Another hit likely to impact supply is the COVID-19 vaccine mandate for truckers on both sides of the border.

How great an impact the mandates will have on grocery stores is yet to be seen, but Dalhousie University food distribution professor Sylvain Charlebois said on The Roy Green Show that Canada imports $21 billion worth of food from the U.S. every year, and 70 per cent of that comes across the border on wheels.

The Canadian Trucking Alliance (CTA) estimates as many as 32,000 Canadian and American cross-border truck drivers may be taken off the roads due to the mandates. That represents 20 per cent of the 160,000 truckers total and is in addition to nearly 23,000 drivers the industry was short before the mandate, according to StatCan and Trucking HR Canada.

“It’s hard to believe that there won’t be any disturbances,” Charlebois said.

Since winter has put a pause on many Canadian crops, we rely heavily on the U.S. for fruits and vegetables, he said, making our food system at this time “way more vulnerable.”

Charlebois said the impact of the mandate on grocery stores will vary.

He said most larger grocery companies operate their own fleets and will likely be fine because they probably already have their own vaccine mandates.

However, smaller grocers may be more affected because they don’t operate their own fleets and are not “huge customers for transportation companies.”

With a reduced amount of drivers, companies will have to choose who gets deliveries, Charlebois said.

Trucking executive Dan Einwechter of Challenger Motor Freight Inc. in Cambridge, Ont., has already sounded the alarm on the mandate, telling Reuters that consumers will see that “there’s not as many choices on the shelves” within two weeks.

However, Gary Sands, senior vice-president at the Canadian Federation of Independent Grocers, which represents about 6,900 businesses across Canada, said some statements from truckers have been alarmist and are “overstating the case.”

“When you walk into grocery stores you might see certain areas are bare, where the product has not yet arrived, but it’s coming,” he said.

He did say that there have been product delays, shortages and some products not arriving at all, and warns that supply shortages are “more acutely felt” in smaller communities.

The trucker vaccine mandate has compounded the issue, Sands said.

When there is less supply but the demand remains the same, it’s almost certain that food prices will increase, Sands said.

He is already seeing price increases of about 25 per cent for fruit and vegetables, and 18-20 per cent for dairy, and warns consumers to definitely not expect any promotions for the time being.

Price increases are necessary to offset the cost of goods beset by labour shortages, as small grocers often face tight margins. If they don’t increase prices, they could go out of business.

“The big watch for consumers in the weeks ahead is just going to be the impact on prices,” Sands said.

That increase comes as Canada faces unprecedented inflation, with the country’s inflation rate hitting a 30-year high of 4.8 per cent in December.

Economists have said the vaccine mandate for truckers will keep the prices higher for longer.

Sands doesn’t predict any relief for prices until the pressure on labour decreases, which he said could be helped by more access to rapid test kits to decrease the time workers isolate.

Nevertheless, Sands was hopeful that shortages will be temporary and said there is no reason to panic or stockpile as was seen at the beginning of the pandemic in 2020 when toilet paper was piled high in shopping carts, even if consumers are seeing some bare shelves now.

Instead, Sands recommends shoppers adjust their habits, such as going one week without a certain product like bananas or visiting more than one store.

“This is going to be a bit of a challenge the next three, four, five weeks,” Sands said. “But we’re going to get out of it. The Canadian supply chain is strong.”

—  with files from Reuters

Is the bubble about to burst for Bitcoin? | Inside Story – Al Jazeera English 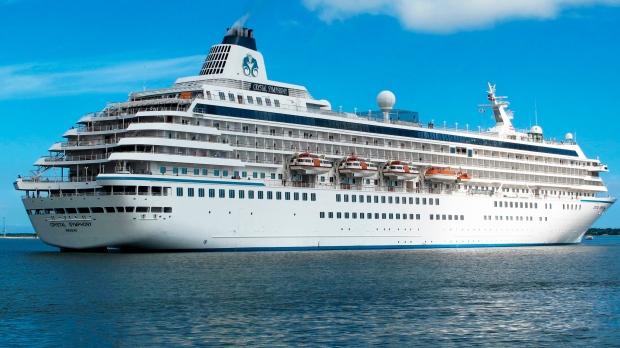 MIAMI —
A cruise ship that was supposed to dock in Miami has instead sailed to the Bahamas, after a U.S. judge granted an order to seize the vessel as part of a lawsuit over millions of dollars in unpaid fuel.

Passengers were taken by ferry to Port Everglades in Fort Lauderdale on Sunday.

“We all feel we were abducted by luxurious pirates!” passenger Stephen Heard Fales posted on Facebook.

It was unclear how many passengers were aboard, with one news outlet reporting 300 and another, 700. According to the company website, the vessel can carry up to 848 passengers.

The ship was scheduled to arrive in Miami on Saturday. But a federal judge in Miami issued an arrest warrant for the ship Thursday, a maritime practice where a U.S. Marshal goes aboard a vessel and takes charge of it once it enters U.S. waters.

Passengers and entertainers said on social media they were surprised to find out about the legal case. One guest posted a letter on Facebook from Crystal Cruises Management that said the change in itinerary was due to “non-technical operational issues.”

The lawsuit was filed in a Miami federal court by Peninsula Petroleum Far East against the ship under a maritime procedure that allows actions against vessels for unpaid debts. The complaint says Crystal Symphony was chartered or managed by Crystal Cruises and Star Cruises, which are both sued for breach of contract for allegedly owing US$4.6 million in fuel.

Crystal Cruises announced earlier this week that it was suspending operations through late April. Besides Crystal Symphony, it has two other ships currently cruising, which end their voyages on Jan. 30 in Aruba and on Feb. 4 in Argentina.

“Suspending operations will provide Crystal’s management team with an opportunity to evaluate the current state of business and examine various options moving forward,” the company said in a statement earlier this week.