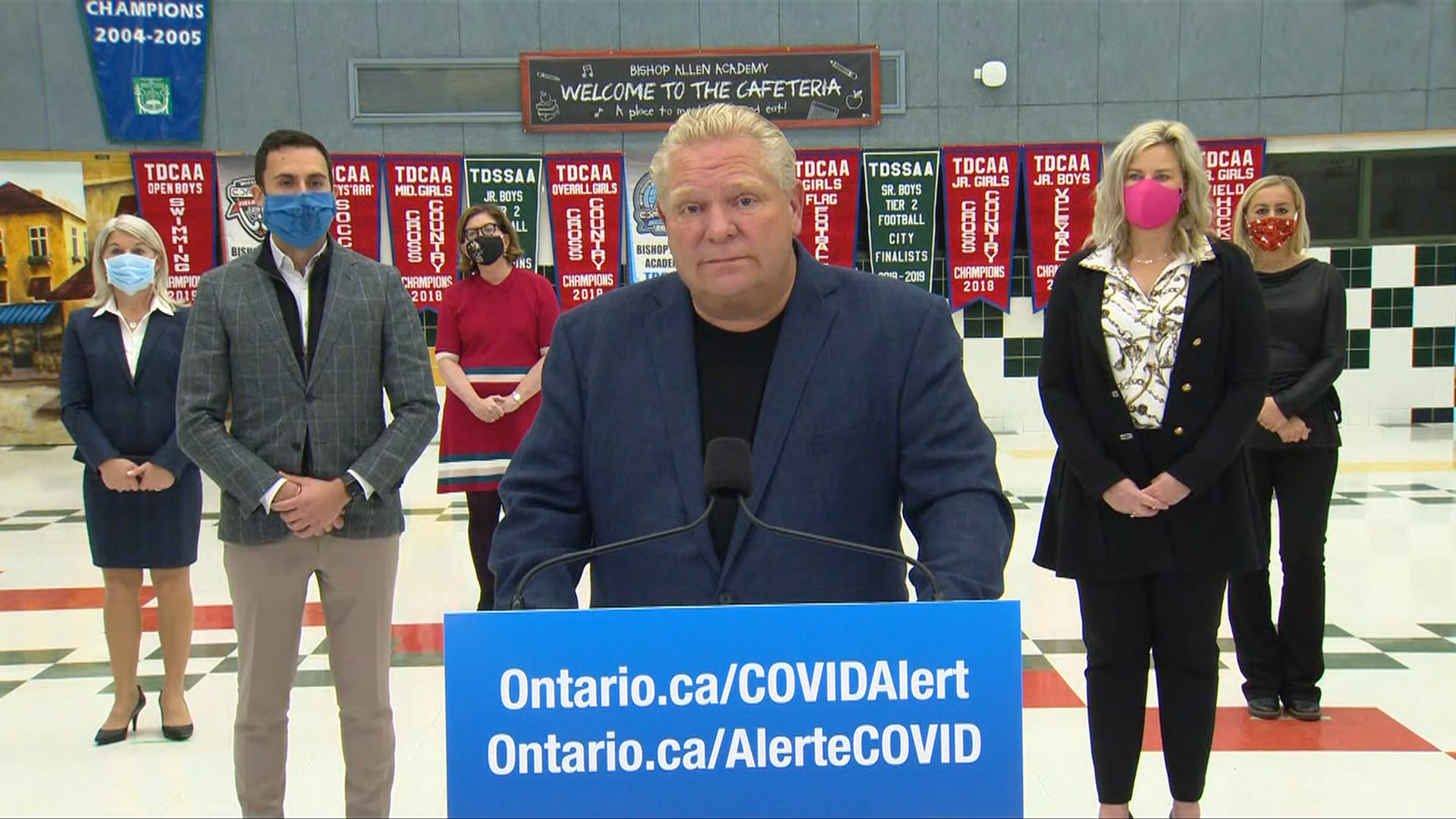 Premier Ford says he hopes to begin easing restrictions in COVID-19 hotspots as early as next weekend.

The 28 day step back for Toronto, Peel Region, and Ottawa into a modified stage 2 expires at 12:01 a.m. next Saturday and one week later in York Region.

In his daily COVID-19 update, Ford says the latest modelling supports the move.

“Based on what I’m seeing in the modelling, I’ve asked our public health experts to come back next week with a plan to begin to ease restrictions in a way that safely allows businesses to open up when the 28 days is over.”

Ford says the restrictions that closed indoor dining rooms, gyms, and other businesses were never intended to be long-term solutions but were necessary to avoid reaching a point where more drastic measures would be needed.

The province released modelling on Thursday that revealed the growth of the second wave has slowed.

When the Ford government introduced the modified Stage 2 restrictions back on Oct. 10, cases were doubling every 10 to 12 days.

While growth has slowed, cases are still on the rise, with Ontario’s seven-day average surpassing 900 for the first time on Friday.

A group from Ontario’s restaurant industry is calling on the provincial government to explain its decision to impose tighter COVID-19 restrictions on the sector.

A coalition that includes the industry association Restaurants Canada and a number of food service businesses has issued an open letter to Premier Doug Ford, asking to see what data the province relied on in setting its health measures.

The letter says no data have been provided so far that would suggest restaurants are a major point of transmission for the virus.

It notes restaurants have had to make significant investments in safety procedures and training, personal protective equipment and other measures, yet those in some regions are nonetheless being forced to stop serving customers indoors.

The document released yesterday by the province showed that in four COVID-19 hot spots — where indoor dining is currently banned — the proportion of outbreaks linked to restaurants and bars between Aug. 1 and Oct. 24 ranged between 3.2 and 27.14 per cent.

Ontario’s hospitals are facing “unprecedented” financial pressures because of the pandemic, the head of the association representing them said Friday, asking the government to speed up funding promised to address COVID-19 costs.

Anthony Dale, president of the Ontario Hospital Association, said many hospitals are using lines of credit or funding previously earmarked for capital projects to pay for pandemic-response measures.

Hospital resources are stretched thin, and many facilities remain at or above capacity, Dale said.

In August, the province set aside billions in new funding to address COVID-19 costs in the health-care system.

Dale said, however, that while the government is aware of the fiscal pressure hospitals are facing, only COVID-19 costs from March and April have been covered so far.

If the additional funding promised by the province doesn’t begin to flow soon, the facilities may eventually not be able make payroll, he said.

“We hope that would never seriously happen in a hospital, but the reality is, at a certain point in time you hit a wall,” he said. “You really lose your ability to pay for your daily operating costs … because you don’t have cash on hand.”

Dale said slowing community spread of the virus is also an important part of relieving the stress on hospital resources and, in turn, cutting costs.

Ford responded to a question about the letter Friday’s news conference, saying he looks forward to speaking with Dale, but wishes the OHA would call him before releasing open letters.

Yiu said AHS also plans to increase the number of people who do contact tracing to 1,800 by the end of the year. She said it has been challenging to keep up with the demand following the surge in cases over the past six weeks.

Meanwhile, health-care workers are asking Albertans to stay home if they can and wear a mask at all times if they have to go out in public. In a media release on Friday, United Nurses of Alberta president Heather Smith said health-care workers won’t be able to get the virus under control if Albertans don’t follow public health measures.