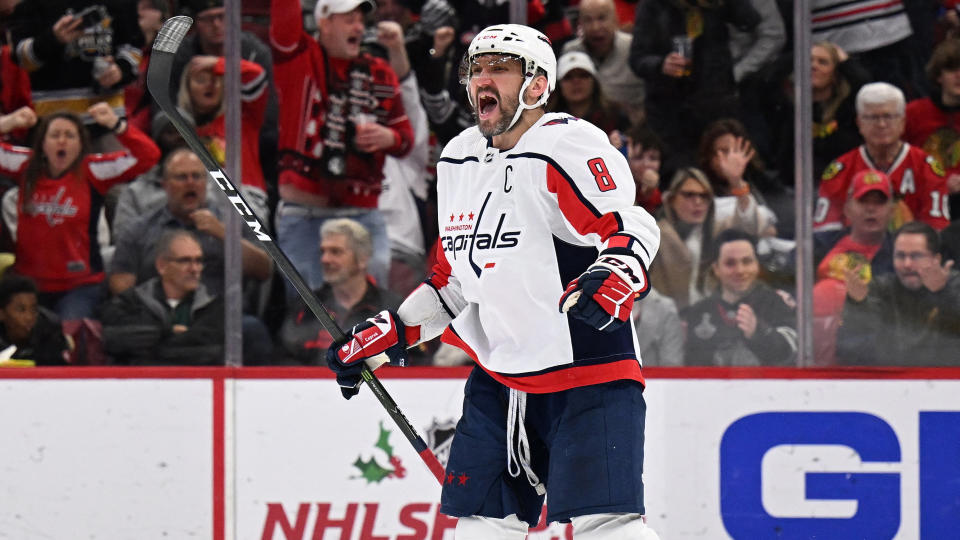 Alexander Ovechkin became the third player in NHL history to reach the 800-goal mark with a hat-trick against the Chicago Blackhawks on Tuesday. It’s a tremendous accomplishment, one of the defining moments of the 2022-23 season, and it’s a milestone that certainly invites ideas about where Ovechkin will rank historically when it’s all said and done.

We should let Ovechkin enjoy the moment. But we also can’t help but try to project if (or when) Ovechkin could break Wayne Gretzky’s career goals record. The Great One posted 894 tallies during his illustrious career, a mark that was once thought to be unbreakable.

So let’s try to figure out when Ovechkin will stand alone with the greatest individual record in hockey, shall we?

Ovechkin entered this season with 780 goals, and has scored 20 times in 31 games this season. He hasn’t missed a game during the 2022-23 campaign. As a result, we can extrapolate the numbers to project that at this pace, Ovechkin would score 52 goals in 82 games, putting him at 832 goals for his career.

Before we head off to the races with 832 goals as a baseline entering next season, it’s worth a reminder that Ovechkin hasn’t played a full season since 2017-18. Ovechkin is pretty durable, but projecting him to play all 82 games during his age-37 season seems highly unreasonable. He’s not necessarily prone to load management, but it’s more likely to expect that Ovechkin will play 77 games, as he did last year. So if we adjust his pace totals from this year over the course of a 77-game campaign, Ovechkin would finish this season with 50 goals, putting him at 830 goals for his career thus far.

This is usually where we’d try to find an age-related precedent for Ovechkin, to get an accurate reading on how and when he will enter a period of decline. The problem here — and it’s a good one if you’re rooting for Ovechkin on this quest — is that he may be a singular force in hockey history. Ovechkin became the oldest player to score 50 goals in a season last year, the ninth time in his career where he reached this mark, joining Gretzky and Mike Bossy in exclusive company.

Jaromir Jagr and Johnny Bucyk at age 34 and 35, respectively, were previously the oldest players to reach the 50-goal mark in a single-season. Ovechkin has already shattered this record and might stand alone with 10 separate 50-goal seasons. How do we anticipate his decline?

Using data from NHL.com, Ovechkin has scored at a 0.62 goals-per-game rate since notching his 700th goal on Feb. 22, 2020. He’s scoring at a 0.65 mark this season, so it’s reasonable to use the 0.62 mark as a reasonable framework to project how Ovechkin will hold up, barring injury of course.

(This is the trickiest element to factor in, given how durable Ovechkin has been throughout his career, with no signs of slowing down anytime soon.)

With our baseline of 830 goals entering the 2023-24 campaign, set to a 0.62 goals per game pace over 75 games, conservatively, Ovechkin will score 47 goals next season, which will bring him to 877 goals when the summer of 2024 comes rolling around. It feels somewhat insane to type out that 47 goals is a conservative estimate of what Ovechkin could do after his 38th birthday, but we’re talking about a truly unprecedented scorer in NHL history here.

I think it’s reasonable to drop Ovechkin’s goal per game average to a 0.6 mark for the 2024-25 campaign. Projecting this far into the future invites a lot of guesswork, rules out the possibility of significant injury or, god forbid, the heightening of another global pandemic. At some point, the physical and mental toll of being the primary assignment for the opposition will wear down Ovechkin’s torrential goal-scoring exploits. If he enters the 2024-25 season with 877 goals under his belt, he’ll need to score 18 goals to beat Gretzky’s record.

Using our projections above, which again, are reasonable estimates upon a number of indeterminate factors, Ovechkin should get his 18th goal of the campaign sometime around the midpoint of the 2024-25 season or even earlier. So if you’re in the business of planning way, way into the future, you might want to take a trip to the capital of the United States in about two years from now to watch history unfold.

Ovechkin’s pursuit of Gretzky’s goal record once appeared to be an ambitious but unlikely endeavor. We’re not willing to say it’s a certainty that Ovechkin will become the goal king. Maybe, against all data and the eye test, Ovechkin will start functioning like a normal athlete his age and enter a period of steep decline. But we haven’t seen anything to suggest it.

Ovechkin is still one of the NHL’s marquee scorers, he’s unquestionably one of the best of all-time, and will pass Gordie Howe for second on the career list before Christmas. If we’re going to make a prediction, Ovechkin will become the NHL’s new goal king on December 10, 2024. You heard it here first.

Kylian Mbappé eyes another title at 2022 FIFA World Cup with France vs. Argentina

Novak Djokovic congratulated Australian Open runner-up Elena Rybakina on “an amazing tournament.” On Saturday, 23-year-old Rybakina fell just short of landing her second Grand Slam title. In the Australian Open final, Rybakina was up by a set before 24-year-old Aryna Sabalenka stormed back to win 4-6 6-3 6-4.

Rybakina has now made Grand Slam finals in two of the last three Major tournaments.

After winning Wimbledon and finishing as runner-up at the Australian Open, Rybakina admits her confidence levels have increased and she now believes even more that she can win Grand Slams. “For sure, that’s the goal, to be in the second week of all the Grand Slam, to play finals.

I mean, now I have more confidence of course even after this final. I just need to work hard, same as I did during pre-season and actually throughout the years, be healthy, and for sure the results are going to come. I would say I’m trying to not think about expectations and everything.

Still after a great pre-season like this I was thinking I should show it on the court. Then, of course, the results are going to be there. First few weeks was not that great…but I think in the end it’s just confidence to go forward, to keep on working.

I feel now good physically also. I know if I’m going to keep on working, the results are going to be (good),” Rybakina said after the match, per Tennis Majors. Rybakina has proved over the last six months that she has what it takes to be a legitimate Grand Slam contender.