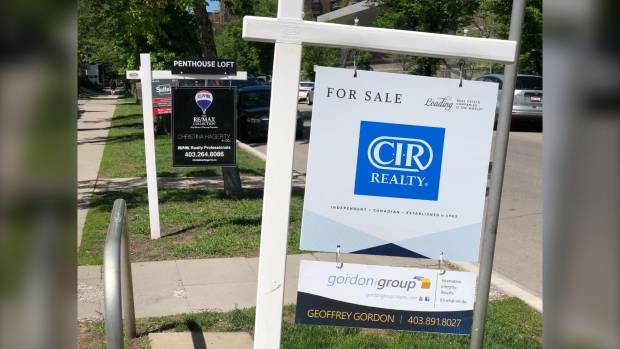 CALGARY —
Home sales in Calgary in June rose compared with a year ago to a new record for the month.

The Calgary Real Estate Board says sales totalled 2,915 las month, up 65.3 per cent compared with a year ago.

The sales came as new listings in June totalled 4,135, up 23.6 per cent compared with a year ago and the second highest level for the month. New listings in May were 4,564.

CREB chief economist Ann-Marie Lurie said through the early spring market, many buyers did not have a lot of choice, but the recent improvements in supply are providing more options.

This report by The Canadian Press was first published July 2, 2021.

It looks like the real estate buying frenzy may finally be starting to calm down a little. While homes in Montreal are still selling much more quickly than they used to in pre-COVID days — in June more than twice as fast, on average, compared to last year — real estate brokers, especially those outside of the city, say they are not seeing the same intensity of competition among buyers as they did a few months ago. The pace of growth in sales and prices also seems to be slowing down.

It’s not just Montreal. The annual Engel & Völkers Mid-Year Canadian Luxury Real Estate Market Report, released late last month, described a “wave of market normalization” in major cities across the country following an unprecedented growth in sales over $1 million in the first half of the year.

Sales of luxury homes in Montreal increased 134 per cent year-over-year from January to June. Yet in May and June, new listings in Montreal were getting fewer visits and offers than earlier in the year, the report noted. While bidding wars were still fairly common, the competition was more likely to be among just a few buyers, not dozens.

According to real estate broker Patrice Groleau of Engel & Völkers Montreal, competition for properties in the outer suburbs appears to be decreasing as more homes come on the market, but he said demand for high-end properties in the city remains strong because there is so little supply.

“It’s going to be a soft landing for the entry-level real estate,” Groleau said. “The luxury segment still has a lot of momentum going on.”

While the pandemic spurred many Montrealers to make drastic lifestyle changes such as moving from the city to a bigger home in the country or buying a second home in cottage country, with vaccination rates rising and reopening well underway, Groleau said it’s becoming trendy again to buy a place in the city.

“People took permanent decisions in a temporary situation,” Groleau said. “It was easier to go out (of the city) but coming back in is going to be harder.”

In the Quebec Professional Association of Real Estate Brokers’ most recent quarterly market update, analysts pointed to the same trend and noted that the price acceleration seen in the past year in Montreal is not sustainable long-term.

Director of Market Analysis Charles Brant said that affordability issues due to mortgage rate increases, market-calming measures implemented by governments, and changing spending habits as the COVID crisis eases are likely to result in a decline in sales levels by the end of the year.

“Even though records were still being set in the second quarter of 2021, the pace of sales growth has slowed,” Brant said.

The reprieve may only be temporary, however, thanks to pent-up demand for Canadian real estate from international buyers shut out of the market due to COVID-19 restrictions.

Because international borders have been closed since the beginning of the pandemic, the Engel & Völkers report predicts that when international travel resumes, there will be a new surge in interest from foreign buyers looking at Canada’s metropolitan areas — particularly in Vancouver and Montreal. With a relatively low supply of luxury properties available in both cities, a new wave of international buyers could “significantly strain the market,” the brokerage’s report noted.

It is Montreal that is pegged to be Canada’s next investor favourite. Prices are still much lower than Vancouver and Toronto, and the city is also on the cusp of a boom in development, the report notes, with an estimated 60,000 new construction projects expected to enter the market over the next three years.

While some international buyers are purchasing vacation homes or properties they can rent out, most in Montreal are buying a home to live in, whether for themselves or their adult children, Groleau said. Even if they do not intend to remain in Canada permanently, because Canadian homeowners do not pay capital gains tax when they sell their primary residence, real estate is a practical investment for those who can afford it.

“If you have money and you’ve come here, you’re comparing the price tag to London, to Paris, and so on. (Montreal) is still way more affordable than most major cities around the world,” Groleau said.

The restaurant Harlem Shake signed a 10-year lease for 1,200 square feet in this 3,200-square-foot building in Park Slope as its second location. Harlem Shake will share the building, which was built in 1920, with M&C E-Bike II, a bicycle repair shop. The property also includes an occupied three-bedroom apartment above the restaurant.

Built in 1921, this eight-story, 15,550-square-foot building in Midtown contains five floors of office space, two floors of salon space and a retail space at ground level. Two of the office spaces are occupied, and a hair salon is on the second floor and a spa on the third floor. The building was last sold in 2000.