The ruble plunged to a record low of less than one U.S. cent and most global stock markets declined Monday after Western nations moved to block some Russian banks from a global payments system.

Russia’s invasion of Ukraine has caused markets to swing wildly, given the vast potential economic impact, especially on inflation and energy supplies.

Putin’s order that Russian nuclear weapons stand at increased readiness to launch ratcheted up tensions with Europe and the United States and revived dormant fears from the Cold War era.

The Russian central bank raised its key rate to 20 per cent from 9.5 per cent in a desperate attempt to shore up the plummeting ruble and prevent a run on banks. That brought a temporary reprieve for the Russian currency, which bounced back to the level it was at last week, but only briefly.

The ruble had plunged more than 30 per cent after the move to block Russian banks from the SWIFT global payment system, which provides a secure messaging system to facilitate cross-border money transfers.

Among other things, the sanctions by Western nations are meant to crimp the Russian central bank’s access to over $600 billion US in reserves and hinder its ability to support the ruble.

It was unclear exactly what share of Russia’s hard currency coffers would be paralyzed by the decision on SWIFT. European officials said that at least half of it will be affected.

A weaker ruble is expected to cause inflation to surge, potentially angering Russians whose budgets will be stretched by soaring prices. It will also add to strains across Russia’s financial systems.

“At the moment, the ruble is in a state close to free fall,” Alex Kuptsikevich of FxPro said in a report. “At some point in the coming days, we will see the limit of the fall of the ruble, from where it will begin its slow and difficult recovery. But it is hardly possible to pinpoint.”

Markets in Asia and Australia appeared to take the latest developments more calmly with slight gains.

“It’s all about the Russia-Ukraine situation and evolutions in that situation will drive market sentiment and direction,” Jeffrey Halley of Oanda said in a commentary.

“President Putin will now have to accept that the Western powers are prepared to accept quite a bit of economic pain now to punish Russia.”

But the Ukraine conflict has heaped uncertainty atop other worries over interest rates and inflation.

The U.S. Federal Reserve has suggested it will raise short-term interest rates next month by double its usual increase, the first rate increase since 2018. Higher U.S. rates tend to put downward pressure on all kinds of investments, and can have global repercussions. 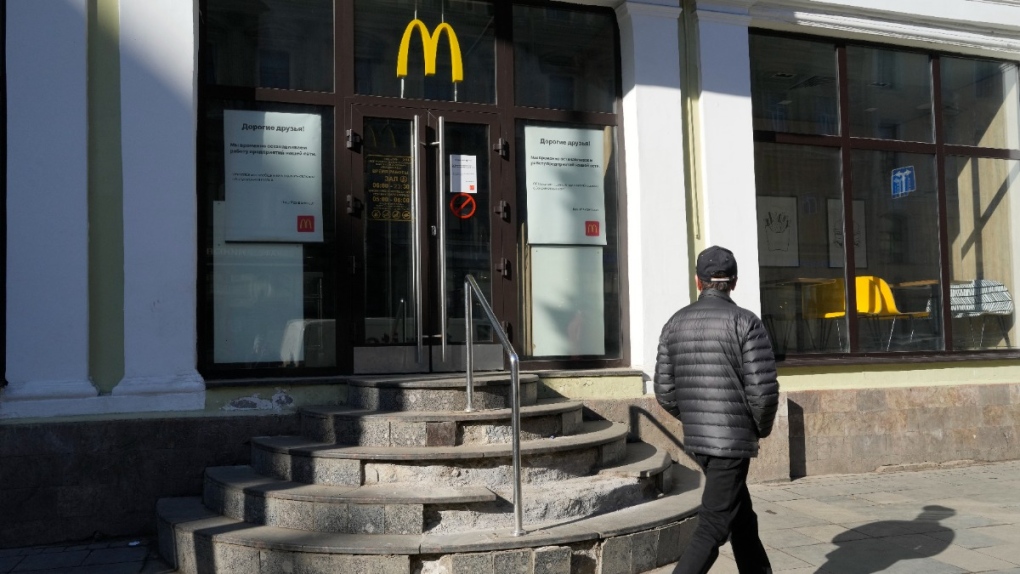 More than three decades after it became the first American fast food restaurant to open in the Soviet Union, McDonald’s said Monday that it has started the process of selling its business in Russia, another symbol of the country’s increasing isolation over its war in Ukraine.

The company, which has 850 restaurants in Russia that employ 62,000 people, pointed to the humanitarian crisis caused by the war, saying holding on to its business in Russia “is no longer tenable, nor is it consistent with McDonald’s values.”

The Chicago-based fast food giant said in early March that it was temporarily closing its stores in Russia but would continue to pay its employees. Without naming a prospective Russian buyer, McDonald’s said Monday that it would seek one to hire its workers and pay them until the sale closes.

CEO Chris Kempczinski said the “dedication and loyalty to McDonald’s” of employees and hundreds of Russian suppliers made it a difficult decision to leave.

As it tries to sell its restaurants, McDonald’s said it plans to start removing golden arches and other symbols and signs with the company’s name. It said it will keep its trademarks in Russia.

Western companies have wrestled with extricating themselves from Russia, enduring the hit to their bottom lines from pausing or closing operations in the face of sanctions. Others have stayed in Russia at least partially, with some facing blowback.

French carmaker Renault said Monday that it would sell its majority stake in Russian car company Avtovaz and a factory in Moscow to the state — the first major nationalization of a foreign business since the war began.

For McDonald’s, its first restaurant in Russia opened in the middle of Moscow more than three decades ago, shortly after the fall of the Berlin Wall. It was a powerful symbol of the easing of Cold War tensions between the United States and Soviet Union, which would collapse in 1991.

Now, the company’s exit is proving symbolic of a new era, analysts say.

“Its departure represents a new isolationism in Russia, which must now look inward for investment and consumer brand development,” said Neil Saunders, managing director of GlobalData, a corporate analytics company.

He said McDonald’s owns most of its restaurants in Russia, but because it won’t license its brand, the sale price likely won’t be close to the value of the business before the invasion. Russia and Ukraine combined accounted for about 9% of McDonald’s revenue and 3% of operating income before the war, Saunders said.

McDonald’s said it expects to record a charge against earnings of between US$1.2 billion and $1.4 billion over leaving Russia.

Its restaurants in Ukraine are closed, but the company said it is continuing to pay full salaries for its employees there.

McDonald’s has more than 39,000 locations across more than 100 countries. Most are owned by franchisees — only about 5% are owned and operated by the company.

McDonald’s said exiting Russia will not change its forecast of adding a net 1,300 restaurants this year, which will contribute about 1.5% to companywide sales growth.

Last month, McDonald’s reported that it earned $1.1 billion in the first quarter, down from more than $1.5 billion a year earlier. Revenue was nearly $5.7 billion.

Do you have any questions about the attack on Ukraine? Email dotcom@bellmedia.ca.

Canadian home prices fall 6% in April, down for 2nd month in a row – CBC News

Prices peaked at a record high of more than $816,000 in February this year and average home prices have now declined for two months in a row. In March, the average price stood at $796,000, before falling another six per cent in April, which is typically a strong month for the housing market.

“Following a record-breaking couple of years, housing markets in many parts of Canada have cooled off pretty sharply over the last two months, in line with a jump in interest rates and buyer fatigue,” CREA chair Jill Oudil said in a statement.

CREA says the average selling price can be misleading because it is easily skewed by expensive and numerous sales in big cities like Toronto and Vancouver. It highlights a different number called the House Price Index as a better gauge of the market because it adjusts for the volume and type of homes sold.

The HPI shrank by 0.6 per cent in April, the first monthly decline in two years.

While prices are down from their recent peak, they remain up by about seven per cent from where they were a year ago.

Still, the numbers paint a picture of a housing market cooling from its feverish activity just a few months ago.

“The exorbitant run-up for more expensive units (like detached homes) during the pandemic may give way to a steeper decline,” TD Bank economist Rishi Sondhi said in a note to clients.

A problem for sellers — and some buyers, too

Lower prices may be welcome news for buyers trying to get into the market, but they’re anxiety-inducing for those trying to sell — especially if they’ve already bought somewhere else themselves.

For some recent buyers, a market that’s cooled after they’ve bought can cause major headaches. Some who bought at the highs assuming their lenders would loan them a certain amount are discovering in the appraisals process that the bank is valuing that property by less than anticipated, which forces the buyers to have to come up with more than they were expecting up front.

Leah Zlatkin, a mortgage broker with Lowestrates.ca, gives the example of a buyer who offered $1.2 million on a home and assumed their lender would finance 80 per cent of the cost. On appraisal, however, the lender valued the property at $1.1 million, which forces the buyer to come up with tens of thousands of dollars more than they anticipated.

“When home purchasers have really stretched their budget and bid over asking price, we are starting to see those appraisals come in a little bit lower in some cases,” Zlatkin told CBC News.

Keith Lancastle, CEO of the Appraisal Institute of Canada, says it’s not uncommon in frothy markets for buyers to get carried away and offer far more than an appraiser values the property at — and the same is true of down markets.

“The selling price doesn’t drive the mortgage, the appraised value drives the mortgage, and that’s the value that the lenders base their decision on,” he said.

Have questions about this story? We’re answering as many as we can in the comments.