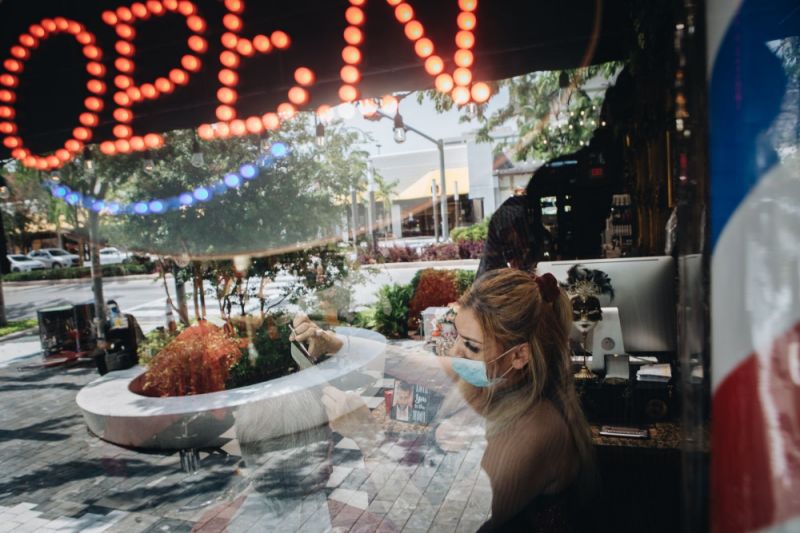 (Bloomberg) — U.S. stocks rose, but closed sharply off their highs after Bloomberg News reported that the Trump administration is considering sanctions on Chinese officials, threatening to escalate tensions between the world’s two largest economies.

The S&P 500 ended up 1.2% at an 11-week high, giving up in the final half hour of trading almost 50% of gains that topped 2%. Stocks had soared earlier as investors poured back into risk assets on speculation the worst of the economic hit from the pandemic has passed. Megacap tech shares in the Nasdaq 100 fell on the day, while chipmakers exposed to China tumbled at the end of the session.

Traders spent much of the day pouring into riskier pockets of the market as they played catch-up to a rally that pushed socks higher by as much as 35% from March lows, even as news over the long weekend brought signs of mounting tension with China. That bid faded after the report that the Treasury Department could impose controls on transactions and freeze assets of Chinese officials and businesses for implementing a new national security law that would curtail the rights and freedoms of Hong Kong citizens.

Fresh economic data had showed that the easing of lockdown restrictions is boosting economic activity. The contours of the gains, with small-caps and energy shares leading, suggest investors who doubted its staying power are now targeting areas that have lagged behind so far. Large-cap tech shares, the group that lifted stocks from pandemic lows, trailed Tuesday.

While economic data is still awful by virtually any historic comparison, a consensus among investors is building that the worst from the pandemic is over, easing fear that the rally was a bear trap destined to come undone. Now they will also contend with an increase in China tension that could threaten trade at a delicate time for the global recovery.

Elsewhere, the Stoxx Europe 600 Index advanced, with travel stocks surging on reports that Germany plans to lift travel warnings for 31 European countries. The U.K. also announced steps toward getting back to business, sending the pound up by the most in almost a month.

Japan led the equity advance in Asia as the world’s third-largest economy reopened, and shares rose in Hong Kong, which showed signs of stabilizing after weekend unrest. Treasuries slid after the three-day U.S. weekend, alongside Germany’s government debt.

While investors’ spirits are being lifted by economic reopenings, there are also mounting signs that coronavirus infection rates are moderating. The Japanese government ended its nationwide state of emergency Monday, while Germany recorded a decline in the number of new virus cases. Signs that more euro area stimulus is on the way is also helping support the appetite for risk.

“The narrative for markets is shifting somewhat, with hopes associated with the easing of lockdown measures in many countries and still very exaggerated hopes of a vaccine being found short-term, needing to be balanced against escalating U.S./China tensions,” said Marc Ostwald, chief economist and global strategist at ADM Investor Services.

The euro strengthened ahead of negotiations this week on the form of a bloc-wide recovery fund. WTI crude oil advanced to around $34 a barrel on hopes the market may rebalance after historic output cuts.

Should We Reopen The Economy? The Tug-Of-War Between Economists And Epidemiologists – Forbes

Quebec is looking to ramp up 202 infrastructure projects across the province in response to the novel coronavirus pandemic’s toll on the economy.

Bill 61, known as an “Act to restart Quebec’s economy and to mitigate the consequences of the public health emergency” due to the COVID-19 crisis, was unveiled by the government on Wednesday.

As part of the plan, the government wants to accelerate the construction of schools, seniors’ homes, roads and public transit systems. If passed, the bill will allow some projects to be fast tracked without all the regular procedures in place.

Treasury Board President Christian Dubé said the province wants to help people and sectors recover during the health crisis as lockdown measures implemented in March are slowly eased. He insisted that rigor will still be used when it comes to doling out contracts.

“We will not go against laws or regulations,” he said, adding the bill will permit for certain authorizations to be given more quickly.

The proposed legislation will revive the economy and allow for a less bureaucratic process, according to Dubé.

“We know we were all weathering an unusual storm,” he said.

Under the plan, about 90 infrastructure projects would be ramped up in the health sector, including construction on 48 seniors’ homes. This also includes renovation plans for hospitals in Montreal, such as the renovation and expansion of Lachine Hospital.

In the education sector, about 39 projects would be fast tracked. This includes the construction of new elementary and high schools as well as the expansion of other academic institutions such as Dawson College in Montreal.

When it comes to roads and public transit, the Legault government is looking at accelerating about 50 projects. This includes the long-awaited extension to the Montreal Metro’s blue line.

Finance Minister Eric Girard described the situation as “exceptional” when outlining the details of the bill alongside Dubé.

Girard also announced that he will provide an update on the province’s finances on June 19, but warned that the pandemic has had a grip on the economy.

“This year is going to be a negative year,” he said. “The worst year for the economy since World War Two.”

The announcement comes as Quebec saw 291 new cases of COVID-19, the disease caused by the virus, on Wednesday. It leads the country with 51,884 infections.

The death toll stands at 4,794 after 81 more fatalities were reported from the previous day.

As of Wednesday, the number of hospitalizations decreased by 34 for a total of 1,141. There are 158 people in intensive care.

Mayor Jim Watson has asked Premier Doug Ford to consider reopening the City of Ottawa’s economy as part of a regional approach to relaxing COVID-19 restrictions.

“Mayor Watson spoke to Premier Ford last night and expressed his support for a more regional approach given our city is doing better than many other parts of the province,” Watson’s press secretary Patrick Champagne said Wednesday morning.

“As you know, we also have the added challenge of being a border city, creating an unlevel playing field, as businesses like hair salons and barber shops have reopened in Gatineau but not in Ottawa. Premier Ford fully understood our dilemma and committed to keeping the Mayor’s perspective in mind as they consider a regional approach to reopening the Ontario economy.”

Ford last week expressed interest in a regional approach to reopening Ontario’s economy based on COVID-19 testing and results, rather than tweak provincial emergency orders and have the rules apply to the entire province.

U.S. service providers started to emerge in May from a pandemic-induced tailspin as nationwide lockdowns on business and social interaction began to lift.

The Institute for Supply Management said Wednesday that its non-manufacturing index rose 3.6 points to 45.4.

While the monthly increase was the largest in more than two years, the gauge remained below the 50 mark that shows most service-related industries continued to contract.

The purchasing managers group’s gauge of business activity, which parallels the ISM’s factory production index, jumped 15 points, the most in records dating back to 1997, to a still-tepid 41. Along with an improvement in new orders, the figures are a welcome sign that the economy is stabilizing and will gradually recover from a deep recession.

The median forecast in a Bloomberg survey of economists called for an improvement to 44.4 in the overall non-manufacturing index.

The report, however, also showed the labor market remains severely disrupted by the pandemic. The ISM measure of employment at services, which represent almost 90 per cent of the economy, only rose 1.8 points from the worst reading on record in April.

A Labor Department report on Friday is projected to show another 8 million decline in May payrolls after an unprecedented 20.5 million slump in April. The unemployment rate is forecast to soar to nearly 20 per cent.

A pickup in demand as states lift lockdowns and businesses begin to reopen is needed to help stabilize the job market. The ISM’s report showed an index orders at service providers climbed 9 points to a still-weak 41.9.

Meanwhile, the index of supplier deliveries in non-manufacturing industries fell for the first time in four months, indicating an easing in supply-chain bottlenecks and transportation delays.

‘Something has to do be done:’ Plaintiff in Northwood class action lawsuit wants accountability – Globalnews.ca