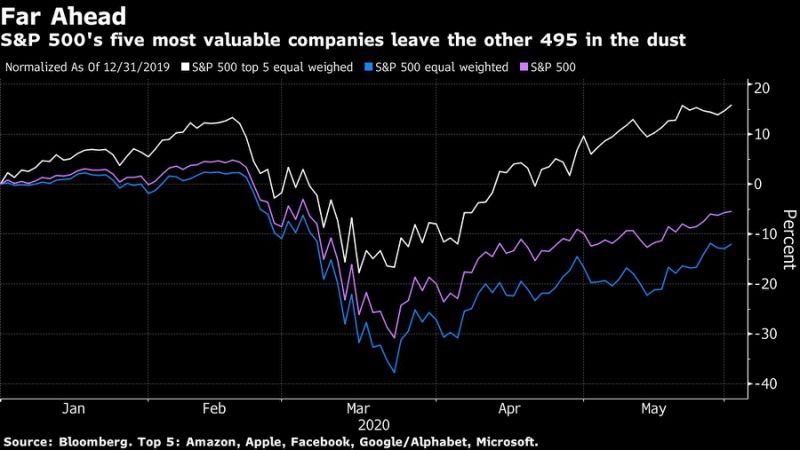 (Bloomberg) — U.S. stocks rose alongside equities in Europe and Asia amid new bouts of stimulus and positive economic signals as coronavirus lockdowns ease. The dollar slumped for a fourth consecutive day.

Two shares rose on the S&P 500 Index for every one that fell, lifting the benchmark to its highest since March 4. Gunmakers extended rallies in the wake of President Donald Trump’s promise to deploy large numbers of troops if cities and states don’t act to contain violence from protests over police brutality.

Stocks are hovering near their highest in three months as businesses reopen around the world and manufacturing gauges show economies stabilizing following coronavirus shutdowns. That’s despite a slew of risks still on the horizon, including tense U.S.-China relations that may jeopardize a hard-won trade deal. The sometimes violent demonstrations across U.S. cities over the killing by police of George Floyd, an unarmed black man, aren’t yet seen as a major drag on the economy and corporate profits.

“Everyone who is assessing what they’re seeing on the news every night is recognizing things getting worse, and yet the markets are focusing on things that they believe are getting better,” said Brian Levitt, a global market strategist at Invesco. Coronavirus “cases have plateaued in aggregate and compressed in some of the hardest hit areas. Mobility is starting to pick up, reopenings are starting to pick up.”

Stimulus hopes powered Europe’s Stoxx 600 to a 12-week high as Chancellor Angela Merkel sought to thrash out a second aid package for Germany. Oil gained as investors eyed a potential extension of record production curbs by OPEC+. Treasuries edged lower, while the pound gained on positive news in trade negotiations between Britain and the EU.

In Europe, the ECB is expected to top up its rescue program with an additional 500 billion euros of asset purchases at a meeting on Thursday. Anything less than an expansion would be a big shock, Bloomberg Economics said.The U.S. labor market report on Friday will probably show American unemployment soared to 19.6% in May, the highest since the 1930s.

Alberta reported 77 new cases of COVID-19 on Friday, bringing its total number of cases to 8,596.

There are 592 active cases across the province and 7,844 people have recovered from the coronavirus.

“One of the deaths reported at the Misericordia has been determined to not have COVID-19 as a contributing cause of death,” a spokesman for the province told CTV News.

Alberta has the second-worst provincial unemployment rate in Canada after Newfoundland and Labrador..

According to new Statistics Canada data, unemployment reached 15.5 per cent in June.

It marks an 8.8 per cent difference from the same time last year.

The only province with a higher unemployment rate is Newfoundland and Labrador, at 16.5 per cent.

And unemployment in Alberta’s largest cities is also highest among Canadian major urban centres: about 15.7 per cent of the Edmonton workforce is currently unemployed, and 15.6 per cent of the Calgary workforce.

In May, their unemployment rates were 13.6 per cent and 13.4 per cent, respectively.

The news comes alongside a report that Canada added 953,000 jobs in June as businesses forced to close by the pandemic began to reopen.

“That’s important progress but we have a long way to go,” Alberta Premier Jason Kenney commented Friday at a news conference in Fort Saskatchewan, where a carbon capture and storage facility recently reached the five-million equivalent tonnes milestone.

Kenney’s government’s economic recovery plan centres on infrastructure projects that create jobs and making Alberta an attractive place for investment – as does the facility at the Shell Scotford complex, Kenney said.

“Projects like this are a key part of Alberta’s recovery plan to build, to diversify, and to create jobs. When the global economy comes back form COVID, when demand returns for oil and gas, we are going to see, I believe, something of a supply shortage because of all the upstream exploration that has been cancelled, and so we’ll see prices go up. And that will be a great opportunity for Alberta, especially as we make progress on pipelines,” he said.

“But there’s one critical factor, we’ve got to bring investment back. And that means we’ve got to demonstrate our progress on environmental responsibility which is why investments like this… are so important to jobs, the economy, and the future prosperity of Alberta.”

The national unemployment rate fell to 12.3 per cent after hitting a record-high of 13.7 per cent in May.

With files from CTVNews.ca

OTTAWA — Executives from three of Canada’s largest grocery chains were in communication before launching and ending temporary wage increases for grocery store workers during COVID-19, but maintain their decisions were not co-ordinated.

Metro Inc. was aware of Loblaw Companies Ltd.’s decision to stop its so-called pandemic pay program before it made a similar decision, chief executive Eric La Fleche told the House of Commons standing committee on industry, science and technology Friday.

La Fleche said that a Metro competitor’s move was one of several influencing factors in its decision-making process.

He joined the Loblaw president and Empire Co. Ltd. chief executive at a two-hour session about why they stopped paying a temporary wage bump to employees as of June 13.

“Let me be absolutely clear, we did not co-ordinate our decisions,” said Michael Medline, Empire CEO, in his opening statement before the committee. Medline, whose company owns the Sobeys and Safeway brands, was the first of the trio to give his opening remarks.

“The decision was our own.”

Loblaw president Sarah Davis echoed the sentiment, but noted she sent a “courtesy email” to both competitors, as well as Walmart and Save-On-Foods, on June 11. The latter two did not appear at the hearing.

The email notified competitors of Loblaw’s decision to end its pandemic pay program on June 13. The company had already informed its roughly 200,000 employees, she said, and recognized “the news would be public immediately.”

La Fleche said in later questioning that he was aware of the email when Metro made its decision to end its bonus pay program on the same day.

“We made our own decision based on the information we had, which included that last piece of information, yes,” he said.

He called it “one factor among others” contributing to its decision. Other factors included the broader economic reopening, other retailers starting to open their doors, lower business volumes and a gradual return to more normal conditions.

Empire had not received Davis’s email when the company made its decision to terminate the extra wages, said Medline, but had heard through the grapevine that Loblaw was considering doing so.

Davis received a reply to her June 11 email, and said she would provide copies of the original and all answers to the committee.

Read more:
Making a trip to the grocery store? Don’t forget these items

In addition to receiving the email, La Fleche said he made several phone calls to competitors in May and June to ask whether they planned to extend their bonus pay programs or end them on previously announced dates.

“In perfect compliance with The Competition Act, I asked my counterparts their intentions regarding whether or not they would maintain the temporary bonus,” he said, in a translation from French, during his opening remarks.

In each case, competitors, including Medline from Empire and Davis from Loblaw, told him they had not yet decided.

“Whatever the case, those calls were made in a decisional process that was much larger and … did not inform our decisions.”

When asked why he made the phone calls, La Fleche answered he “wanted as much information as I could have in order to make a best decision for our company, our employees at the right time.”

He said he would “absolutely not” characterize those conversations as trying to obtain a tacit agreement on wages.

Those who sent emails and made phone calls said they consulted with company counsel before doing so and lawyers were present during at least one phone discussion.

The appearance was a chance for the executives to admit they were wrong to end the pay increases, said Jerry Dias, president of Unifor, a private sector union.

“What we got instead was highly paid grocery executives insisting they did not collude, and then going on to say _ remarkably _ virtually the same thing over and over again,” he said in a statement.

“The executives all admitted to exchanging ‘courtesy emails’ and ‘courtesy calls’ on pandemic pay, and yet insist there was no collusion. I look forward to the committee’s ruling on that.”

Unifor has been critical of retailers ending temporary wage increases while the pandemic continues and has called for the pay bump to be permanent.

'Gerryfest' to celebrate Gerry Atwell's music and art, but also his advocacy against systemic racism – CBC.ca

COMMENTARY: Canada and the U.S. are neighbours but miles apart when it comes to COVID-19 – Globalnews.ca