Some inmates at Stony Mountain Institution, a federal prison in Manitoba, could receive their first dose of the COVID-19 vaccine as early as Friday.

The Correctional Service of Canada announced it will start vaccinating “older, medically vulnerable” federal inmates, based on advice from the National Advisory Committee on Immunization, which lists residents and staff of all shared living settings — including correctional facilities — as a priority group once further vaccine supply is available.

Federal inmates will receive doses of the Moderna vaccine, and the doses will be administered by health workers at federal correctional institutions, the CSC said in a news release issued Thursday. Distribution could start as soon as Friday.

“In correctional facilities, just like many other congregate sites, people are in very tight quarters. But in prison, there are also concerns because people who are in prison … can’t protect themselves from each other in many ways,” she said.

Inmates may not be able to physically distance or sanitize the way people in society may be able to. Some facilities, such as Stony Mountain, are also old and do not have good ventilation. That all results in higher risks of infection and transmission, Ho said.

There will be enough vaccine distributed to immunize about 600 federal inmates total this round, said Public Safety Minister Bill Blair. CBC News has contacted the CSC about how many doses will be sent to Stony Mountain Institution.

The announcement to vaccinate inmates has received flak from various politicians, however, including federal Opposition Conservative Leader Erin O’Toole, and Ontario Premier Doug Ford, who question why inmates will receive the vaccine before other essential workers and care home residents.

The Union of Canadian Correctional Officers, which represents more than 7,400 correctional officers in 49 federal correctional institutions, also has concerns.

“We are disappointed that CSC did not consult with the union. They essentially made the plan and conveyed the plan,” said Jeff Wilkins, the union’s national president, in a news release.

“Our members are working in institutions right now that have been declared as pandemic sites, and they are not afforded the protection of a vaccine. They should be a priority.”

The union is also wondering if the federal government will distribute doses to sites with worse COVID-19 outbreaks, Wilkins said.

Stony Mountain Institution has had more inmates test positive for COVID-19 than any other federal correctional facility in the country.

As of Jan. 6, there were 16 known active cases among Stony Mountain inmates, according to the CSC website. But since the pandemic began, 361 inmates total have contracted the illness and one inmate has died.

A total of 47 staff members at Stony Mountain have also tested positive for COVID-19; 27 of those cases are active as of Jan. 7, said a CSC spokesperson.

As of Tuesday, any Manitoba health-care worker who comes in direct contact with patients and works in provincial or federal correctional facilities is eligible to book an immunization appointment.

The announcement to vaccinate federal inmates is sound public health policy, says Ho, and anyone criticizing the plan does not fully understand that.

“If we say, especially in public health situations, that we won’t give medical attention to inmates, that’s a double jeopardy,” said Ho. “The health care should have no bearing on whether the person is in prison or not — that’s not part of the sentence.

“We’re not rewarding people based on their being in prison or not. This is a public health crisis that, if we don’t start with people who are at the highest risk of getting sick, who would then also have the chance of transmitting to others, then we will not be able to control this pandemic. “

Ho noted that critics may also be assuming that all inmates will accept the vaccine, which may not be the case. She cited Indigenous inmates in particular, who may not trust the government due to a history of mistreatment.

While those numbers have been trending down for several weeks, the spectre of the wider spread from the variants has led the province to delay any plans to end a lockdown on bars, restaurants and gyms that dates to mid-December.

That’s led members of the hospitality industry to urge the province to provide financial support for businesses facing desperate times.

“Please present to your caucus our ask as an industry for additional financial support that would mirror what has been executed in Ontario that has helped immensely in keeping their hospitality industry alive,” Alberta Hospitality Association president Ernie Tsu wrote in an email to Calgary-Fish Creek MLA Richard Gotfried on Tuesday.

He said the sector is seeking provincial grants to ensure 100 per cent rebates on property tax and utilities costs retroactive to December, when the latest lockdown went into effect.

And he repeated his plea for the province to produce data showing the role the industry plays in spreading the virus.

“With the current data still not available to our industry as to why we are still locked down, this financial aid would help to bridge the anxiety and mental health issues which are now starting to truly increase on a day to day basis,” wrote Tsu, who owns the Trolley 5 Brew Pub in Calgary.

But on Tuesday, Hinshaw said those restrictions need to remain in the face of the threat posed by the new COVID-19 variants.

“I know many Albertans and impacted businesses are eager to reopen, this is understandable and I wish it was not necessary to keep the restrictions in place a little while longer,” she said.

“The rise of the new variants also make it vital we not move too quickly, which could have dire consequences for our health system and our health,” she said.

Frustration over restrictions has led to increased disinformation and several incidents in recent weeks of enforcement and health-care officials being “mistreated, verbally abused or treated disrespectfully while carrying out their duties,” she said.

“We need to remember that COVID is the enemy, not one another.”

British Columbia health officials reported 407 new cases, including 22 in Island Health, and 14 deaths from COVID-19 in the past 24 hours on Tuesday.

One of the deaths reported by the province was on Vancouver Island, bringing the total number of people who have died from the virus in the Island Health region to 19.

Of the new cases recorded, 124 are in Vancouver Coastal Health, 169 are in Fraser Health, 22 are in Island Health, 54 are in Interior Health, and 38 are in Northern Health.

There are currently 4,260 active cases in the province, 313 people in hospital — 71 of whom are in intensive care — 6,450 and people under active public health monitoring due to possible exposure to an identified case.

Dr. Bonnie Henry, provincial health officer, said in a statement that the number of daily cases is much “higher than we want it to be” and urged everyone to bring the infection rate down.

“The number of new daily cases of COVID-19 is much higher than we want it to be. We are asking for everyone’s help to bend our curve back down. This is especially critical with the presence of variant viruses in our province.”

Today’s data was released in a statement to the media.

According to the latest data provided by Island Health, there are currently 195 active cases on Vancouver Island – a decrease of 16 since the province’s last update on Jan. 25.

Over the course of the pandemic, the Island Health region has reported 1,477 cases.

Island Health says their figures somewhat differ from the figures released by the provincial government due to “differences in timing of reporting across laboratory and public health data sources.” 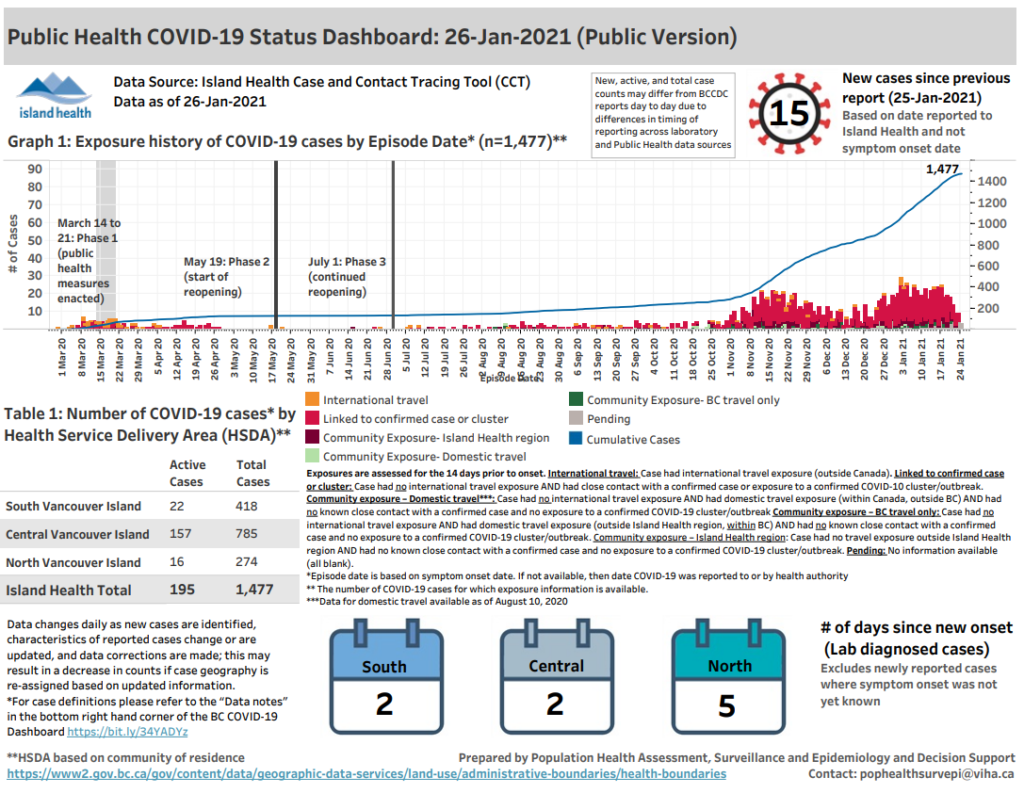 If there is a confirmed COVID-19 case in a school, public health contacts affected school community members directly. Regional health authorities also post-school notifications on their websites, providing the date and type of notification (outbreak, cluster or exposure) for impacted schools.

The Island Health school site can be found here.

Provincial mental health and anxiety support can be found at www.bouncebackbc.ca

Island Health’s COVID-19 data breaks down north, central and south Island case counts and lists the number of days since any new lab-diagnosed cases. You can find the data here along with any public exposures. 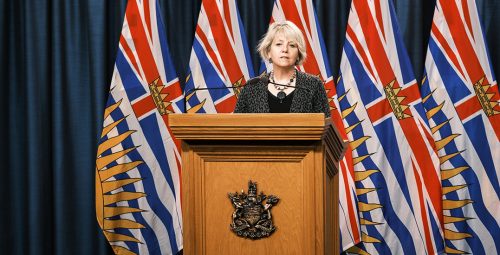 There are 4,260 active cases of COVID-19 in the province. There are 313 individuals currently hospitalized with COVID-19, 71 of whom are in intensive care. The remaining people are recovering at home in self-isolation.

Currently, 6,450 people are under active public health monitoring as a result of identified exposure to known cases.

There have been 14 new COVID-19-related deaths, for a total of 1,168 deaths in British Columbia.

“The number of new daily cases of COVID-19 is much higher than we want it to be,” said Henry. “We are asking for everyone’s help to bend our curve back down. This is especially critical with the presence of variant viruses in our province.”

If Canada can survive four years of Trump, it can navigate the new Buy American: PM – CTV News