TORONTO —
When an earthquake happens underwater on Earth, it can create a tsunami – a ripple effect of gigantic proportions.

Now, a new study says that out in space, supermassive black holes may create tsunami-like structures.

The NASA-funded study was published on June 15 in the Astrophysical Journal. Researchers used computer simulations to model the environment of a supermassive black hole and found that tsunami-like structures​ can form through gas escaping the black hole’s gravitational pull.

A supermassive black hole has a mass that is greater than the mass of a million suns, and is considered the largest category of black holes. These black holes feed off matter and gases that swirl around them, forming a system that astrophysicists call the “active galactic nucleus.”

Strong winds driven by X-ray radiation from the centre of the nucleus create what astrophysics call an “outflow,” pushing matter out of the centre. Within the outflow, the X-rays can produce gas clouds around the black hole.

“These clouds are ten times hotter than the surface of the Sun and moving at the speed of the solar wind, so they are rather exotic objects that you would not want an airplane to fly through,” said lead author Tim Waters in a news release from NASA.

During the simulations, Waters and his team have found that these clouds can form into waves as the black hole loses grip on the matter. These waves can further spiral into vortex structures that are 10 light-years away from the black hole as they interact with hot winds, NASA says.

The simulations also shows that X-ray from the plasma near the black hole inflates pockets of heated gas within the black hole’s atmosphere, allowing the hot plasma to rise like a balloon and meet the surrounding cooler gas clouds.

This allows the clouds to form a pattern that astrophysicists call a Kármán vortex street, resembling a tsunami structure.

Previous theories have suggested that the clouds form spontaneously through fluid instability or that magnetic fields were involved in propelling cooler gas into the wind.

“While it all makes sense in hindsight, it was initially quite confusing to observe that thermal instability cannot produce cold gas directly, yet it can take the place of magnetic fields by lifting cold gas into the wind,” said Waters.

NASA says these findings have yet to be observed by satellites, but plasma near active galactic nuclei within these black holes have been observed by observatories on Earth at temperatures and speeds consistent with the simulations.​

Mining brines from dormant volcanoes could provide the metals needed for a sustainable future – MINING.COM – MINING.com 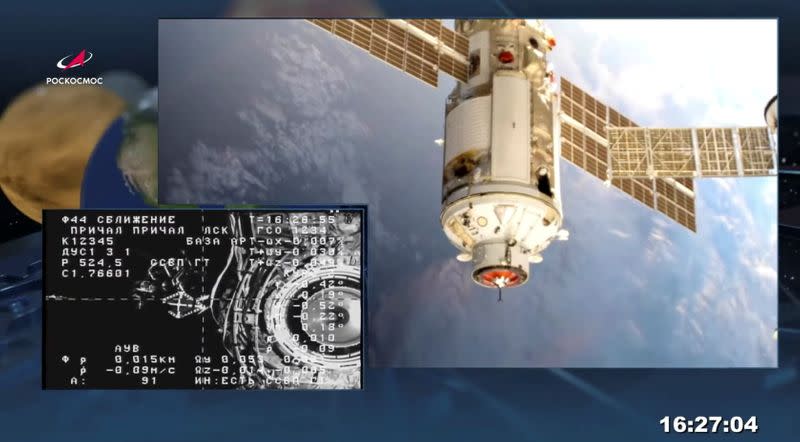 MOSCOW (Reuters) – The head of Russia’s Roscosmos space agency said on Saturday that pressure in a Russian service module on the International Space Station had dropped as a result of an air leak.

Pressure had fallen over a two-week period before a Russian research module, the Nauka, threw the station out of control when its engines fired shortly after docking on Thursday, but Roscosmos head Dmitry Rogozin said the two events were not linked.

The fall in pressure was a result of a known minor air leak in an isolated transfer chamber of the Zvezda service module and pressure will be raised in the next 24 hours, Roscosmos said in a statement.

“It was an expected and not a ‘sharp’ drop in the still problematic Zvezda and it is not linked to the research module,” Rogozin tweeted in response to media reports.

Pressure in the service module dropped on July 29, the day the Nauka research module docked, to about one third of its level on July 14 but would be increased, Rogozin tweeted.

The air leak in the Zvezda module, which provides living quarters for crew members and life support systems, was detected last year. It poses no danger to the crew but persists despite attempts to fix it by sealing cracks.

Russia said on Friday that a software glitch, and possible lapse in human attention, were to blame for an emergency caused by inadvertently reignited jet thrusters of the Nauka research module.

On Saturday, Russian crew entered the research module after the air was tested and cleaned, Rogozin tweeted.

Russia held a scientific council meeting on Saturday to discuss the future use of the Russian segment of the space station, which was sent into orbit in 1998 and is supposed to work until 2028.

MOSCOW — A newly arrived Russian science lab briefly knocked the International Space Station out of position Thursday when it accidentally fired its thrusters.

For 47 minutes, the space station lost control of its orientation when the firing occurred a few hours after docking, pushing the orbiting complex from its normal configuration. The station’s position is key for getting power from solar panels and or communications. Communications with ground controllers also blipped out twice for a few minutes.

Flight controllers regained control using thrusters on other Russian components at the station to right the ship, and it is now stable and safe, NASA said.

“We haven’t noticed any damage,” space station program manager Joel Montalbano said in a late afternoon press conference. “There was no immediate danger at anytime to the crew.”

Montalbano said the crew didn’t really feel any movement or any shaking. NASA said the station moved 45 degrees out of attitude, about one-eighth of a complete circle. The complex was never spinning, NASA spokesman Bob Jacobs said.

The incident caused NASA to postpone a repeat test flight for Boeing’s crew capsule that had been set for Friday afternoon from Florida. It will be Boeing’s second attempt to reach the 250-mile-high station before putting astronauts on board; software problems botched the first test.

The launch of Nauka, which will provide more room for scientific experiments and space for the crew, had been repeatedly delayed because of technical problems. It was initially scheduled to go up in 2007.

In 2013, experts found contamination in its fuel system, resulting in a long and costly replacement. Other Nauka systems also underwent modernization or repairs.

Stretching 43 feet (13 meters) long, Nauka became the first new compartment for the Russian segment of the outpost since 2010. On Monday, one of the older Russian units, the Pirs spacewalking compartment, undocked from the station to free up room for the new lab.

Nauka will require many maneuvers, including up to 11 spacewalks beginning in early September, to prepare it for operation.

In 1998, Russia launched the station’s first compartment, Zarya, which was followed in 2000 by another big piece, Zvezda, and three smaller modules in the following years. The last of them, Rassvet, arrived at the station in 2010.

Russian space officials downplayed the incident with Dmitry Rogozin, head of Roscosmos, tweeting: “All in order at the ISS. The crew is resting, which is what I advise you to do as well.”

MOSCOW: Russia upgraded its capabilities on the International Space Station on Thursday after its new Nauka module, set to serve as a research lab, storage unit and airlock, successfully docked with it after a nervy journey from Earth.

A live broadcast from Russia’s space agency, Roscosmos, showed the module, a multipurpose laboratory named after the Russian word for ‘science’, docking with the ISS at 1329 GMT, a few minutes later than scheduled.

“According to telemetry data and reports from the ISS crew, the onboard systems of the station and the Nauka module are operating normally,” Roscosmos said in a statement.

Since it launch last week from Kazakhstan’s Baikonur Cosmodrome, the module had suffered a series of glitches that had raised concerns about whether the docking procedure would go smoothly.

Thursday’s development suggests Russia is interested in maintaining the ISS despite previous comments from Rogozin who last month suggested Moscow would withdraw from it in 2025 unless Washington lifted sanctions on the space sector that he said were hampering Russian satellite launches.

Launched in 1998, the ISS is a multinational project and comprises two segments, a Russian one and another one used by the United States and other space agencies.

“After its commissioning, the Russian segment will receive additional room for arranging workplaces, storing cargo and housing water and oxygen regeneration equipment,” Roscosmos said its statement.

Legal Disclaimer:
MENAFN provides the information “as is” without warranty of any kind. We do not accept any responsibility or liability for the accuracy, content, images, videos, licenses, completeness, legality, or reliability of the information contained in this article. If you have any complaints or copyright issues related to this article, kindly contact the provider above.

How can Canada avoid a fourth wave of COVID-19? Doctors weigh in – CTV News

LACKIE: Buyers and sellers beware, bailing on a real estate contract could be costly – Toronto Sun