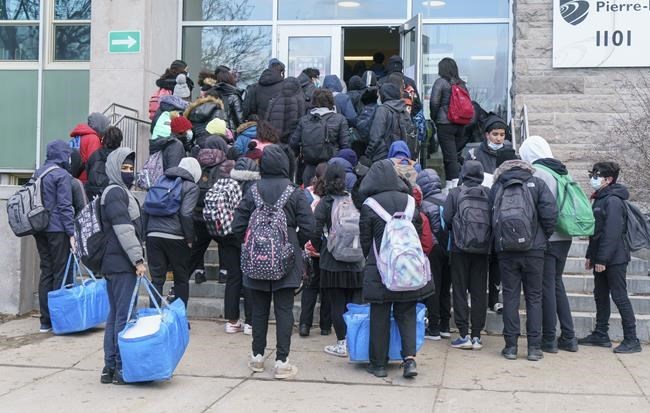 Manitoba is announcing 53 new cases of COVID-19 as health officials say they are watching a concerning rise in variants of concern.

There have been 136 more cases of the variants detected.

Dr. Joss Reimer, medical lead of the province’s vaccine task force, says Manitoba is also limiting the use of the Oxford-AstraZeneca vaccine to people between the ages of 55 and 64 as more information is being sought around some adverse symptoms in younger people noticed in the United Kingdom.

Health officials say the cases are in the Edmundston region, in the northwestern part of the province.

New Brunswick has 120 active reported cases of COVID-19 and four patients in hospital with the disease, including two in intensive care.

The province has reported a total of 1,588 COVID-19 infections and 30 deaths linked to the novel coronavirus.

Prince Edward Island has suspended use of the Oxford-AstraZeneca vaccine for those aged 18 to 29 who had appointments for shots in pharmacies.

Health officials said in a brief statement the appointments are on hold pending further information expected today from Health Canada and the National Advisory Committee on Immunization.

Quebec is reporting 891 new COVID-19 cases and five more deaths attributed to the novel coronavirus, including two in the past 24 hours.

Health officials say that while hospitalizations dropped by three to 477, the number of patients requiring intensive care rose by six to 120.

The province administered 38,801 doses of COVID-19 vaccine on Sunday and has vaccinated 14.9 per cent of the population with a first dose.

Ontario is reporting 2,094 new cases of COVID-19 and 10 more deaths linked to the virus.

More than 50,000 doses of a COVID-19 vaccine were administered in Ontario since Sunday’s daily report.

This report by The Canadian Press was first published March 29, 2021

The White House on Friday said it will lift COVID-19 travel restrictions for fully vaccinated foreign nationals effective Nov. 8, ending historic restrictions that barred much of the world from the United States.

Restrictions on non-U.S. citizens were first imposed on air travelers from China in January 2020 by then-President Donald Trump and then extended to dozens of other countries, without any clear metrics for how and when to lift them.

Curbs on non-essential travelers at land borders with Mexico and Canada have been in place since March 2020 to address the COVID-19 pandemic.

U.S. airline, hotel and cruise industry stocks rose on the news, including American Airlines, up 1.9%; Marriott International Inc, up 2.2%; and Carnival Corp, up 1.3%.

The United States had lagged many other countries in lifting such restrictions, and allies welcomed the move. The U.S. restrictions have barred travelers from most of the world, including tens of thousands of foreign nationals with relatives or business links in the United States.

The White House on Tuesday announced it would lift restrictions at its land borders and ferry crossings with Canada and Mexico for fully vaccinated foreign nationals in early November. They are similar but not identical to requirements announced last month for international air travelers.

Unvaccinated visitors will still be barred from entering the United States from Canada or Mexico at land borders.

The Centers for Disease Control and Prevention (CDC) told Reuters last week the United States will accept the use by international visitors of COVID-19 vaccines authorized by U.S. regulators or the World Health Organization.

The White House, which held a meeting late Thursday to finalize the Nov. 8 date, still faces some remaining questions, including how and what exemptions the Biden administration will grant to the vaccine requirements. Children under 18, for example, are largely expected to be exempt from the requirements, an official said.

U.S. Travel Association Chief Executive Roger Dow said in a statement that the Nov. 8 date “is critically important for planning – for airlines, for travel-supported businesses, and for millions of travelers worldwide who will now advance plans to visit the United States once again.”

The White House announced on Sept. 20 that the United States would lift restrictions on air travelers from 33 countries in early November. It did not specify the date at the time.

Starting Nov. 8, the United States will admit fully vaccinated foreign air travelers from the 26 so-called Schengen countries in Europe, including France, Germany, Italy, Spain, Switzerland and Greece, as well as Britain, Ireland, China, India, South Africa, Iran and Brazil. The unprecedented U.S. restrictions have barred non-U.S. citizens who were in those countries within the past 14 days.

The United States has allowed foreign air travelers from more than 150 countries throughout the pandemic, a policy that critics said made little sense because some countries with high COVID-19 rates were not on the restricted list, while some on the list had the pandemic more under control.

The White House said last month it would apply vaccine requirements to foreign nationals traveling from all other countries.

The new rules do not require foreign visitors or Americans entering the country to go into quarantine.

Americans traveling overseas must still show proof of a recent negative COVID-19, and unvaccinated Americans will face stricter COVID-19 testing requirements. They will also be subject to restrictions in the countries they plan to visit, which may include quarantines.

Canadian Prime Minister Justin Trudeau said on Friday he would reshuffle his cabinet on Oct. 26 and ensure there was a  gender balance , even though he lost female ministers in an election last month.

Trudeau was re-elected to a third term in office on Sept. 20 but only won a minority of seats, which means he needs to cooperate with opposition legislators to govern.

“The new  cabinet will remain gender balanced,” said a statement from Trudeau’s office. Since taking power in late 2015, Trudeau – an avowed feminist – has named cabinets with an even split of male and female ministers.

But in the run-up to the election, one high-profile woman cabinet minister quit and another three lost their seats.

His office also said the new Parliament would be recalled on Nov 22.

Trudeau, who was reelected last month, needs to replace four government ministers who were either defeated or quit.