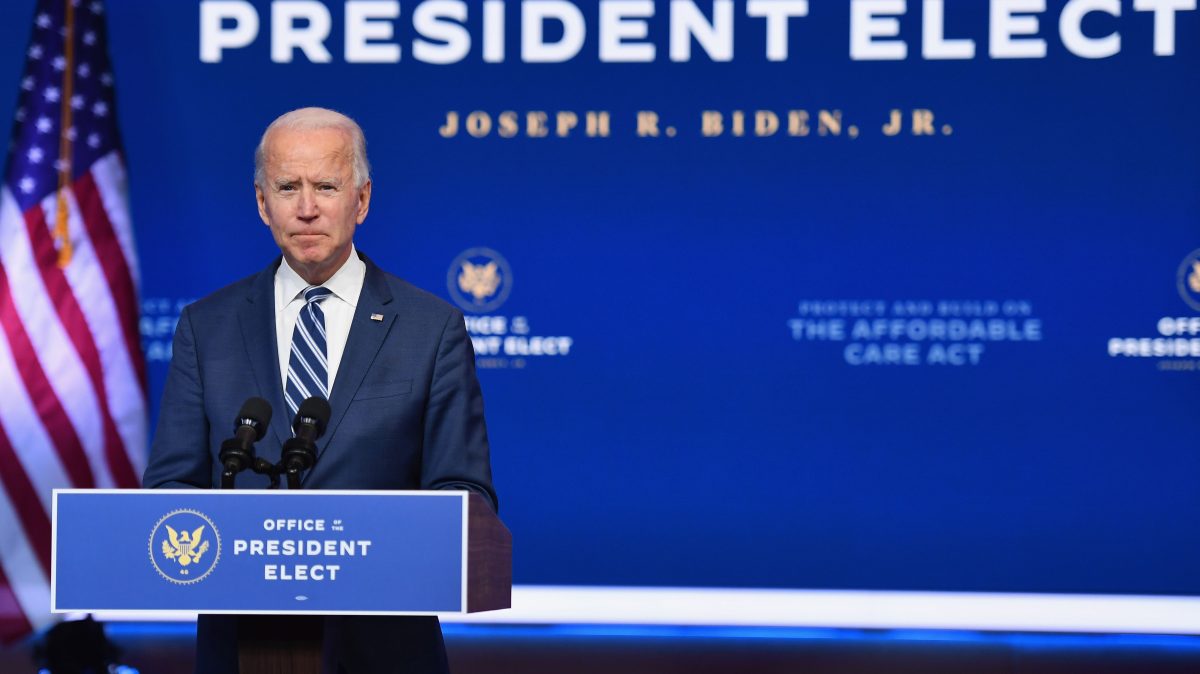 The uncertainty surrounding this year’s presidential election had some investors and watchers worried about what contested results could mean for the economy. In late October, “Marketplace” host Kai Ryssdal spoke with Wendy Edelberg, director of the Hamilton Project and a senior fellow at the Brookings Institution, about how the election might affect the economy.

Now that a winner has been declared, Ryssdal spoke with Edelberg again about what might come next for this economy. The following is an edited transcript of their conversation.

Kai Ryssdal: Well, here we are in the future of which we spoke three and a half weeks ago. We have a winner in the presidential election, although the president and his party are refusing to admit that. I wonder, as you read the economic tea leaves now, how you’re feeling.

Wendy Edelberg: I’m certainly feeling better in that it looks like some of the worst outcomes that folks feared are off the table with regards to the immense uncertainty that we might be experiencing post-election. And some of the economic news that we’ve gotten, since we last spoke has been more positive. So that makes me feel better. But there’s, of course, still a lot of economic pain out there. And I still very much want policymakers to act with urgency to do more to support this economy.

Ryssdal: It will not come as news to you that politicians in Washington are not exhibiting that urgency. And in fact, to the degree that they’re talking about more relief for this economy, they are talking — at least Sen. Mitch McConnell is, who will in theory have the deciding vote in the Senate — he’s talking on the smaller end, rather than the larger.

Ryssdal: What do you suppose this economy looks like if, and I’m sorry, to go back to the size thing again, but for as much as I value your expertise, I don’t see them actually doing the thing that you just talked about — about, you know, making it contingent upon the health of the economy. What happens in this economy, if a relief package is on the smaller size?

Edelberg: If it’s on the smaller side, and then they’re incredibly nimble, to be able to come back later and do something again if more is needed, then that isn’t the worst of all possible outcomes. But that’s probably not the world you anticipate either. If it’s too small, no, we’re in big trouble. We have 10 and a half million people who don’t have jobs who used to have jobs. That’s insanity. We have lost sight of what economic pain looks like. And with each passing week, the permanent scarring effects of this economic pain is going to get worse.

Ryssdal: Just to circle back to the thing you started with, which is that, you know, uncertainty is generally speaking down given the results of the election. Do you think the economy, and I understand that I’m anthropomorphizing here, but do you think the economy is doing what President-elect Biden is doing with what President Trump and Republicans are doing, which is in essence saying, nothing to see here, move along, everything’s gonna work out? Right, the economy’s just kind of cranking on.

Edelberg: I think that puts too much emphasis on the fact that there are really bad events that we worried about that look like they’re off the table. And yes, that should all make us breathe a sigh of relief. But when 10 and a half million people are without jobs and small business revenue is down 25%, that’s like hair-on-fire, screaming-down-the-street panic-inducing. Which I would argue — I do argue — is the opposite of nothing to see here.

Pfizer said early data show its coronavirus vaccine is effective. So what’s next?

In the last few months, Pfizer and its partner BioNTech have shared other details of the process including trial blueprints, the breakdown of the subjects and ethnicities and whether they’re taking money from the government. They’re being especially transparent in order to try to temper public skepticism about this vaccine process. The next big test, said Jennifer Miller at the Yale School of Medicine, comes when drug companies release their data, “so that other scientists who the public trust can go in, replicate findings, and communicate them to the public. And hopefully build appropriate trust in a vaccine.”

How is President-elect Joe Biden planning to address the COVID-19 pandemic and the economic turmoil it’s created?

On Nov. 9, President-Elect Joe Biden announced three co-chairs of his new COVID-19 task force. But what kind of effect might this task force have during this transition time, before Biden takes office? “The transition team can do a lot to amplify and reinforce the messages of scientists and public health experts,” said Dr. Kelly Moore, associate director for the Immunization Action Coalition. Moore said Biden’s COVID task force can also “start talking to state leaders and other experts about exactly what they need to equip them to roll out the vaccines effectively.”

What is it like to search for a job right now?

Unemployment fell in October to 6.9%, and people have been coming back into the workforce after losing jobs or giving up on looking for one earlier in the pandemic. But looking for jobs isn’t getting any easier. The key stat right now when it comes to finding a new job? There are nearly twice as many job seekers as there are job openings.

As a nonprofit news organization, our future depends on listeners like you who believe in the power of public service journalism.

Your investment in Marketplace helps us remain paywall-free and ensures everyone has access to trustworthy, unbiased news and information, regardless of their ability to pay.

Donate today — in any amount — to become a Marketplace Investor. Now more than ever, your commitment makes a difference.

Helping Small Business And Getting The Economy Back On Track – StrathmoreNow.com

Helping Small Business And Getting The Economy Back On Track  StrathmoreNow.com