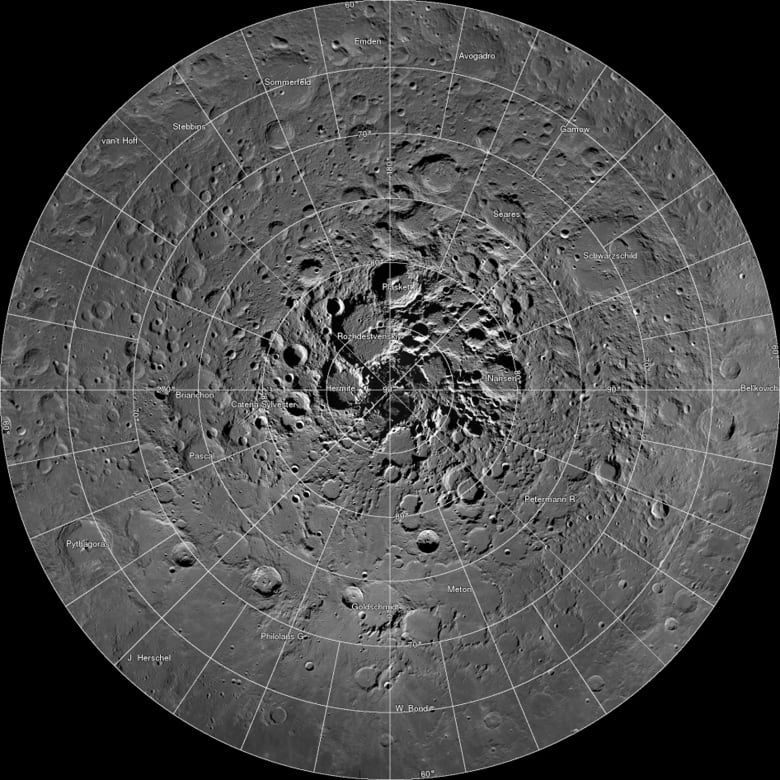 The moon lacks oceans and lakes that are a hallmark of Earth, but scientists said on Monday lunar water is more widespread than previously known. Water molecules are trapped within mineral grains on the surface and more water may be hidden in ice patches residing in permanent shadows, they said.

While research 11 years ago indicated water was relatively widespread in small amounts on the moon, a team of scientists is now reporting the first definite detection of water molecules on the lunar surface. At the same time, another team is reporting that the moon possesses roughly 40,000 square kilometres of permanent shadows that could harbour hidden pockets of water in the form of ice.

Water is a precious resource and a relatively plentiful lunar presence could prove important to future astronaut and robotic missions seeking to extract and utilize water for purposes such as a drinking supply or a fuel ingredient.

A team led by Casey Honniball of NASA’s Goddard Space Flight Center in Maryland detected molecular water on the lunar surface, trapped within natural glasses or between debris grains. Previous observations have suffered from ambiguity between water and its molecular cousin hydroxyl, but the new detection used a method that yielded unambiguous findings. The results were published in the journal Nature Astronomy.

The only way for this water to survive on the sunlit lunar surfaces where it was observed was to be embedded within mineral grains, protecting it from the frigid and foreboding environment. The researchers used data from the SOFIA (Stratospheric Observatory for Infrared Astronomy) airborne observatory, a Boeing 747SP aircraft modified to carry a telescope.

“A lot of people think that the detection I’ve made is water ice, which is not true. It’s just the water molecules — because they’re so spread out they don’t interact with each other to form water ice or even liquid water,” Honniball said.

The second study, also published in the journal Nature Astronomy, focused upon so-called cold traps on the moon, regions of its surface that exist in a state of perpetual darkness where temperatures are below –163 degrees. In those temperatures, frozen water can remain stable for billions of years.

Using data from NASA’s Lunar Reconnaissance Orbiter spacecraft, researchers led by planetary scientist Paul Hayne of the University of Colorado, Boulder detected what may be tens of billions of shadows, many no bigger than a small coin. Most are located in the polar regions.

“Our research shows that a multitude of previously unknown regions of the moon could harbour water ice,” Hayne said. “Our results suggest that water could be much more widespread in the moon’s polar regions than previously thought, making it easier to access, extract and analyze.”

NASA is planning a return of astronauts to the moon, a mission envisioned as paving the way for a later journey carrying a crew to Mars. Accessible sources where water can be harvested on the moon would beneficial to those endeavours.

“Water is not just constrained to the polar region. It’s more spread out than we thought it was,” Honniball said.

Another mystery that remains unsolved is the source of the lunar water.

“The origin of water on the moon is one of the big-picture questions we are trying to answer through this and other research,” Hayne said. “Currently, the major contenders are comets, asteroids or small interplanetary dust particles, the solar wind, and the moon itself through outgassing from volcanic eruptions.”

Earth is a wet world, with vast salty oceans, large freshwater lakes and ice caps that serve as water reservoirs.

“As our closest planetary companion, understanding the origins of water on the moon can also shed light on the origins of Earth’s water — still an open question in planetary science,” Hayne added. 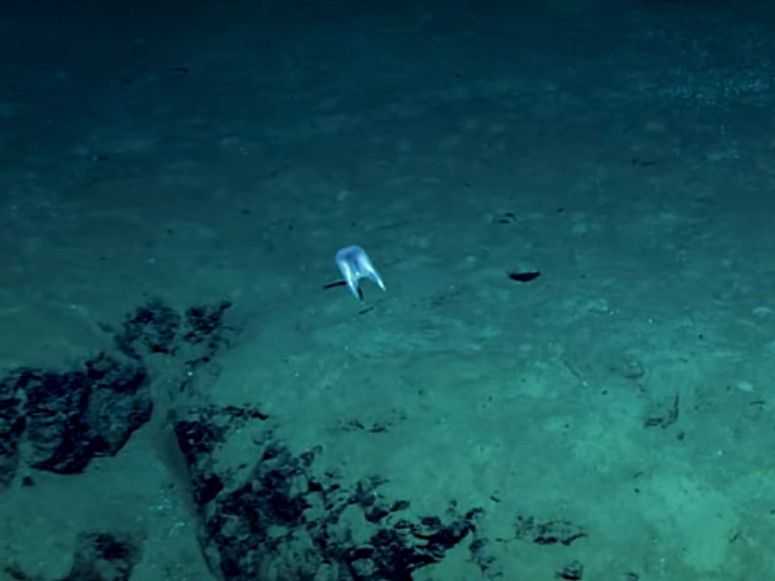 Five years on, in a paper published this month, scientists with the National Oceanic and Atmospheric Administration (NOAA) have confirmed that the blob is an entirely new species of undersea creature, Duobrachium sparksae – a never-before-seen species of jelly-like ctenophore. It’s also the first time that researchers have discovered a species using high-definition video footage only.

“It’s unique because we were able to describe a new species based entirely on high-definition video,” explained NOAA marine biologist Allen Collins in a release. 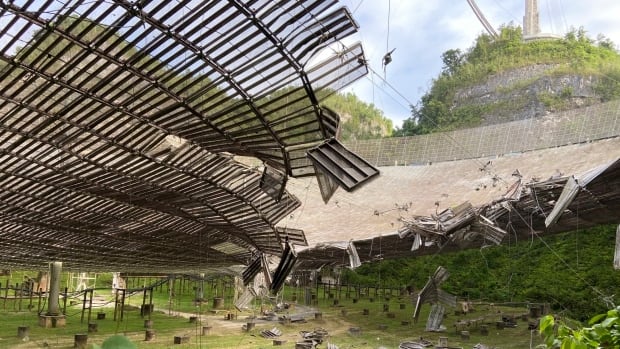 A huge, already damaged radio telescope in Puerto Rico that has played a key role in astronomical discoveries for more than half a century completely collapsed on Tuesday.

The telescope’s 816-tonne receiver platform fell onto the reflector dish more than 122 metres below.

The U.S. National Science Foundation had earlier announced that the Arecibo Observatory would be closed. An auxiliary cable snapped in August, causing a 30-metre gash on the 305-metre-wide dish and damaging the receiver platform that hung above it. Then a main cable broke in early November.

The collapse stunned many scientists who had relied on what was until recently the largest radio telescope in the world.

“It sounded like a rumble. I knew exactly what it was,” said Jonathan Friedman, who worked for 26 years as a senior research associate at the observatory and still lives near it. “I was screaming. Personally, I was out of control…. I don’t have words to express it. It’s a very deep, terrible feeling.”

Friedman ran up a small hill near his home and confirmed his suspicions: A cloud of dust hung in the air where the structure once stood, demolishing hopes held by some scientists that the telescope could somehow be repaired.

“It’s a huge loss,” said Carmen Pantoja, an astronomer and professor at the University of Puerto Rico who used the telescope for her doctorate. “It was a chapter of my life.”

Scientists worldwide had been petitioning U.S. officials and others to reverse the NSF’s decision to close the observatory. The NSF said at the time that it intended to eventually reopen the visitor centre and restore operations at the observatory’s remaining assets, including its two LIDAR facilities used for upper atmospheric and ionospheric research, including analyzing cloud cover and precipitation data.

The telescope was built in the 1960s with money from the Defence Department amid a push to develop anti-ballistic missile defences. It had endured hurricanes, tropical humidity and a recent string of earthquakes in its 57 years of operation.

He last used the telescope on Aug. 6, just days before a socket holding the auxiliary cable that snapped failed in what experts believe could be a manufacturing error. The National Science Foundation, which owns the observatory that is managed by the University of Central Florida, said crews who evaluated the structure after the first incident determined that the remaining cables could handle the additional weight.

But on Nov. 6, another cable broke.

Scientists had used the telescope to study pulsars to detect gravitational waves as well as search for neutral hydrogen, which can reveal how certain cosmic structures are formed. About 250 scientists worldwide had been using the observatory when it closed in August, including Mendez, who was studying stars to detect habitable planets.

“I’m trying to recover,” he said. “I am still very much affected.” 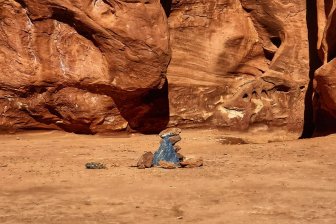 A Chinese robot probe sent to return lunar rocks to Earth for the first time since the 1970s landed on the moon Tuesday, the government announced, adding to a string of increasingly bold space missions by Beijing.

The probe, launched Nov. 24 from the tropical southern island of Hainan, is the latest venture by a Chinese space program that fired a human into orbit in 2003, has a probe en route to Mars and aims eventually to land a human on the moon.

Plans call for the robot lander to drill into the lunar surface and load 2 kilograms (4.4 pounds) of rocks and debris into an ascent stage that will blast off to return them to Earth.

If it succeeds, it will be the first time scientists have obtained fresh samples of lunar rocks since a Soviet probe in the 1970s.

The Chang’e 5 flight is China’s third successful lunar landing. Its predecessor, Chang’e 4, became the first probe to land on the moon’s little-explored far side.

The latest flight includes collaboration with the European Space Agency, which is helping to monitor the mission.

China’s space program has proceeded more cautiously than the U.S.-Soviet space race of the 1960s, which was marked by fatalities and launch failures.

In 2003, China became the third country to fire an astronaut into orbit on its own after the Soviet Union and the United States. It also launched a crewed space station.

Space officials say they hope eventually to land a human on the moon but no time line or other details have been announced.

China, along with neighbours Japan and India, also has joined the growing race to explore Mars.

The Tianwen 1 probe launched in July is en route to the red planet carrying a lander and a robot rover to search for water.

PS5 restock: Here's where and how to buy a PlayStation 5 this week – TechRepublic