New Brunswick has officially assumed the title of Canada’s poorest province and will begin receiving the most funding per capita from the federal government’s equalization support program, starting in April.

The bottom ranking and the poor economic numbers that caused it are unlocking significant new federal financial support for New Brunswick, but that is cold comfort for ending the longtime reign of Prince Edward Island as Canada’s neediest province, according to New Brunswick Finance Minister Ernie Steeves.

“When your transfer payments go up, it’s a sign your economy is weak. I’m not crazy about that. We want New Brunswick to be a have province, not a have-not province.”

The federal Finance Department released figures late Monday of what equalization-receiving provinces will qualify for in funding next year.

New Brunswick’s share is jumping 9.2 per cent to $2.21 billion, the largest increase among receiving provinces.

The new amount is calculated by Ottawa to be worth $2,826 per person in New Brunswick, the most ever paid to a province, and a razor-thin $1 per person more than P.E.I. will receive.

It’s a remarkable turnaround for both provinces.

Equalization is a $20.6-billion federal program designed to help poorer provinces provide comparable levels of service to citizens at similar levels of taxation to richer provinces.

Payments are determined by a complex mathematical formula that measures the revenue-generating ability of each province against a national standard. Those with a below average ability to raise money for themselves qualify for funding.

Quebec receives the most money from the program — $13.25 billion next year — but at $1,547 per person in Quebec, it’s 45 per cent less than what New Brunswick will get.

The three territories do not receive equalization, but have a separate financing formula with the federal government.

Trevor Tombe, an economics professor at the University of Calgary and one of Canada’s leading experts on equalization, said the $187-million jump in New Brunswick’s equalization allotment next year is remarkable, but the causes will take some time to analyze.

“The increase in New Brunswick is actually something that stood out,” said Tombe. “lt’ll be interesting to dig deeper to see what’s driving that specific change.”

The equalization formula uses three years of data and, according to Tombe, next year’s payments are based on provincial economic performance recorded between April 2016 and March 2019.

New Brunswick’s GDP growth over those three years was an estimated 3.7 per cent. That’s the weakest among equalization-receiving provinces, less than the national average and well below the 10 per cent growth recorded in P.E.I..

New Brunswick has long vowed to get itself off equalization. In 2006, former premier Shawn Graham set a “self-sufficiency” goal to be free of equalization payments by 2026. Instead amounts owing to New Brunswick have grown by $900 million, including by $550 million in just the last three years.

Steeves said being a “have” province is still New Brunswick’s goal even though, as Canada’s poorest provincial jurisdiction now, the need for equalization is undeniable.

“We want to be the ones that help everybody else, but right now we do need the help,” said Steeves.

“We’re trying to get our debt back in place where it should be and get it lowered so that we won’t need as much help. But right now we are reliant on Canada and Canadians.”

China has passed an education law that seeks to cut the “twin pressures” of homework and off-site tutoring in core subjects, the official Xinhua news agency said on Saturday.

Beijing has exercised a more assertive paternal hand this year, from tacking the addiction of youngsters to online games, deemed a form of “spiritual opium”, to clamping down on “blind” worship of internet celebrities.

The new law, which has not been published in full, makes local governments responsible for ensuring that the twin pressures are reduced and asks parents to arrange their children’s’ time to account for reasonable rest and exercise, thereby reducing pressure, said the agency, and avoiding overuse of the internet.

In recent months, the education ministry has limited gaming hours for minors, allowing them to play online for one hour on Friday, Saturday and Sunday only.

It has also cut back on homework and banned after-school tutoring for major subjects during the weekend and holidays, concerned about the heavy academic burden on overwhelmed children.

(Reporting by Steven Bian and Engen Tham in Shanghai; Editing by William Mallard)

The Red Cross on Friday urged the international community to engage with Afghanistan’s new Taliban rulers, saying that aid groups on their own would be unable to stave off a humanitarian crisis.

Afghanistan has been plunged into crisis by the abrupt end of billions of dollars in foreign assistance following the collapse of the Western-backed government and return to power by the Taliban in August.

The International Committee of the Red Cross (ICRC) has since increased its efforts in the country while other organisations were also stepping up, Director General Robert Mardini said.

But he told Reuters that support from the international community, who had so far taken a cautious approach in engaging with the Taliban, was critical to providing basic services.

“Humanitarian organisations joining forces can only do so much. They can come up with temporary solutions.”

The United Nations on Thursday announced https://www.reuters.com/world/asia-pacific/un-sets-up-trust-fund-peoples-economy-afghanistan-2021-10-21 it had set up a fund to provide cash directly to Afghans, which Mardini said would solve the problem for three months.

“Afghanistan is a compounded crisis that is deteriorating by the day,” he said, citing decades of conflict compounded by the effects of climate change and the COVID-19 pandemic.

Mardini said 30% of Afghanistan’s 39 million population were facing severe malnutrition and that 18 million people in the country need humanitarian assistance or protection.

The Taliban expelled many foreign aid groups when it was last in power from 1996-2001 but this time has said it welcomes foreign donors and will protect the rights of their staff.

But the hardline Islamists, facing criticism it has failed to protect rights, including access to education for girls, have also said aid should not be tied to conditions.

“No humanitarian organisation can compensate or replace the economy of a country,” Mardini said. 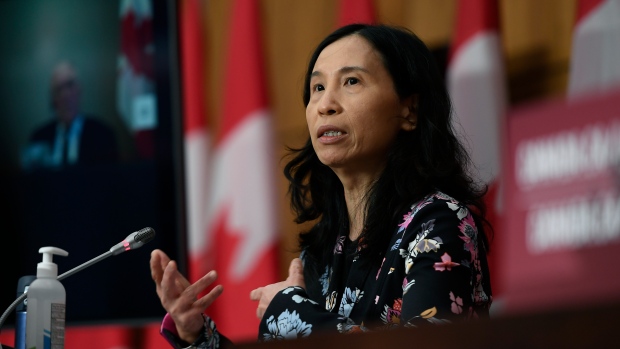 OTTAWA —
Canadians should carefully weigh any future decisions on taking foreign trips even though the federal government has lifted a global advisory asking them to avoid non-essential travel, health officials cautioned Friday.

Dr. Theresa Tam, Canada’s chief public health officer, said the government would be providing more specific information about the severity of COVID-19 in various countries to help Canadians decide where they should consider travelling.

“The pandemic is very much alive. There are definitely still risks involved in travel,” Tam said Friday. She said it was too soon for the government to give a “blanket” recommendation on all travel, but said being fully vaccinated and assessing the level of the pandemic in any potential destination are key.

“Now is not the time to just freely go wherever.”

The government announced Thursday that it was lifting the global advisory asking Canadians to avoid non-essential travel outside the country, but it was continuing to advise against travel on cruise ships.

The global travel advisory was put in place in March 2020 as the COVID-19 pandemic hit.

Dr. Howard Njoo, the deputy chief public health officer, said Friday that Canadians should ask themselves a series of questions before they plan to travel abroad.

Njoo urged Canadians assess the “epidemiological situation” of COVID-19 in any potential travel destination “because there is great variation between different countries and even within countries, as we’ve seen here in Canada.”

They should also look at the level of vaccination rates in those country “because that’s an indication of what community transmission in that region may be.”

Canadian travellers should also ask themselves what they actually want to do when they get to another country. “For example, if you’re going to go on solitary nature hikes, that’s one thing. But if you’re thinking of going on a cruise with a lot of people in an enclosed space, that’s another thing,” said Njoo.

Canadians should also weigh the “culture for individual protection measures” in where they are thinking of travelling, such as whether masks are commonly worn, or not, he said.

“We know that the situation is not the same in all parts of the world. There are regions in the world that are still suffering from the severe consequences of COVID-19,” he said.

The government of Canada’s website now shows advisories for each destination country, as it did prior to the pandemic.

It also urges Canadians to ensure they are fully vaccinated against the novel coronavirus before travelling abroad, and to stay informed of the COVID-19 situation at their destination.

The move comes as the federal government announced it had reached an agreement with the provinces on a new national vaccine passport for domestic and international travel.

Prime Minister Justin Trudeau said Thursday that provinces and territories have agreed to adjust their own vaccine passports to give them the same look, feel and security measures based on the international standard for so-called Smart health cards.

Canada opened its borders last month to non-essential international travellers who have received both doses of a Health Canada-approved COVID-19 vaccine, and to fully vaccinated travellers from the United States in August.

The U.S. government recently announced that its land borders will reopen to non-essential Canadian travellers on Nov. 8.

This report by The Canadian Press was first published Oct. 22, 2021