The U.K. economy emerged from the winter lockdown more strongly than previously estimated, but the recovery is already running into trouble.

Gross domestic product rose rose 5.5% in the second quarter instead of the 4.8% previously estimated, Office for National Statistics figures published Thursday show. The increase, which reflected the reopening of stores and the hospitality sector, left the economy 3.3% smaller than it was before the pandemic struck.

Government spending, exports and business investment were all stronger than previously estimated by the ONS.

Hopes that the shortfall might be made up this year are fading, with consumers and businesses facing the twin headwinds of accelerating inflation and supply chain problems. Bank of England Governor Andrew Bailey on Wednesday said that output is unlikely to recover its pre-pandemic level until early next year, later than officials predicted in August. The BOE last week sharply downgraded its third-quarter growth forecast to 2.1% after firms faced shortages of workers and materials and a resurgence of coronavirus cases made consumers more reticent about spending. Economists say its 2% forecast for the final three months of 2021 is looking increasingly optimistic.

Separate ONS figures showed that consumers saved 11.7% of their income in the second quarter. The ratio was down from a revised 18.4% in the first quarter, when the country was under a third national lockdown to contain the coronavirus. That’s above levels of less than 7% prior to the pandemic.

Crude prices have risen as supply has tightened, with the Organization of the Petroleum Exporting Countries maintaining a slow increase in supply rather than intervening to add more barrels to the market, and as U.S. demand has ramped up.

Globally, refiners have been boosting output thanks to high margins, one that can only be restrained by maintenance. U.S. refining capacity use dropped in the most recent week, but analysts noted that supply may continue to tighten if U.S. refiners also pick up processing again.

“Stronger demand and concerns about a drop in inventories when refiners were already running a low rate during maintenance season is making people concerned about what will happen when refiners have to ramp up production to meet what is very strong demand for gasoline and distillate,” said Phil Flynn, senior energy analyst at Price Futures Group in Chicago.

U.S. crude stocks fell by 431,000 barrels in the most recent week, the U.S. Energy Information Administration said, against expectations for an increase, and gasoline stocks plunged by more than 5 million barrels as refiners cut processing due to maintenance. [EIA/S]

U.S. stocks at the Cushing, Oklahoma delivery hub hit their lowest level since October 2018. Gasoline stocks are now at their lowest since November 2019, the EIA said, while distillate stocks fell to levels not seen since early 2020.

Oil prices have also been swept up in surging natural gas and coal prices worldwide in anticipation that power generators may switch to oil to provide electricity.

Saudi Arabia’s minister of energy said users switching from gas to oil could account for demand of 500,000-600,000 barrels per day, depending on winter weather and prices of other sources of energy. 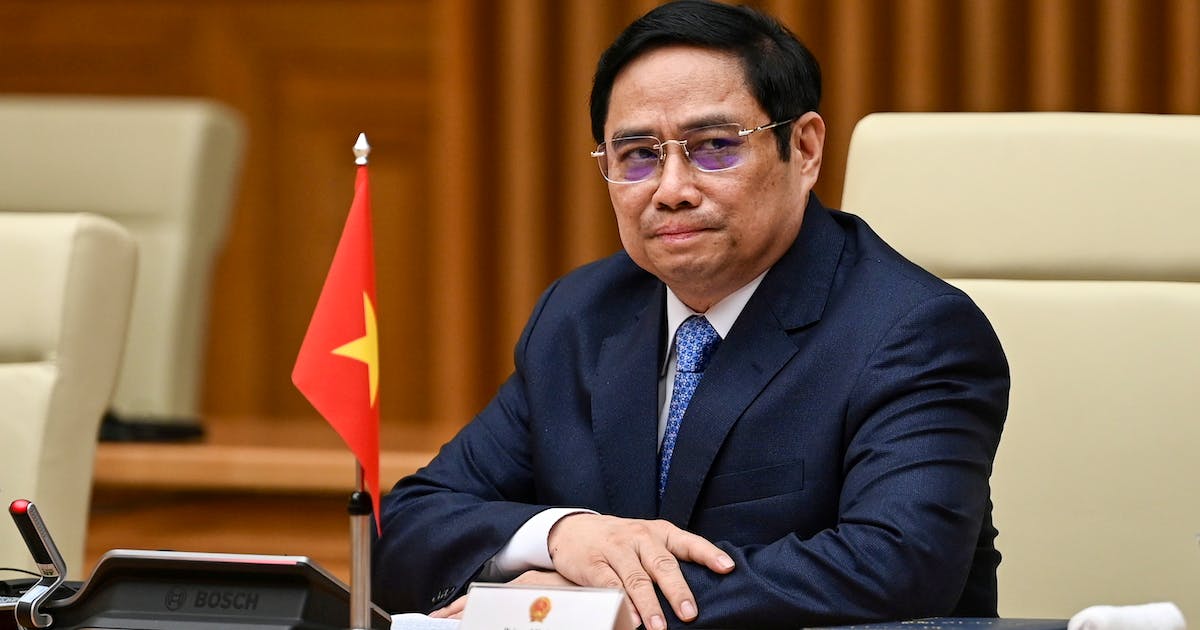 HANOI (Reuters) – Vietnam’s exports are likely to rise 10.7% in 2021, with annual inflation expected below 4%, the prime minister said on Wednesday, promising lawmakers that economic revival lay ahead.

Pham Minh Chinh told the national assembly that Vietnam, consistently one of Asia’s fastest-growing economies, had been badly hit by the coronavirus, which disrupted its supply chains and hit workers in key industries.

Vietnam’s gross domestic product (GDP) contracted 6.17% in the third quarter of 2021 from a year earlier as the containment measures hit, the sharpest quarterly decline on record.

Chinh said he expected GDP to expand 6.0% to 6.5% next year, with the government aiming to cap inflation at 4%.

“Realising 2022 targets is a heavy task, but we definitely will revive our economy,” he said, despite the pandemic having put macroeconomic stability at risk.

“Inflation is facing upward risks and there have been disruptions in the supply chains … workers’ lives have been badly hit.”

Although Vietnam had largely reined in COVID-19 until May, a fast-spreading outbreak of the Delta variant in its economic hub of Ho Chi Minh City led to wide curbs on movement and commerce, hitting key manufacturing provinces nearby.

This month, the government said Vietnam would miss its garment exports target this year, by $5 billion in the worst case, hit by curbs and a shortage of workers.

It expected $34 billion of textile exports, shy of the targeted $39 billion, and a shortage of 35% to 37% of factory workers by year-end, it said.

Ho Chi Minh City has suffered a mass exodus of workers since lockdowns eased last month, on worries they would get stuck again if there was another wave of infections. 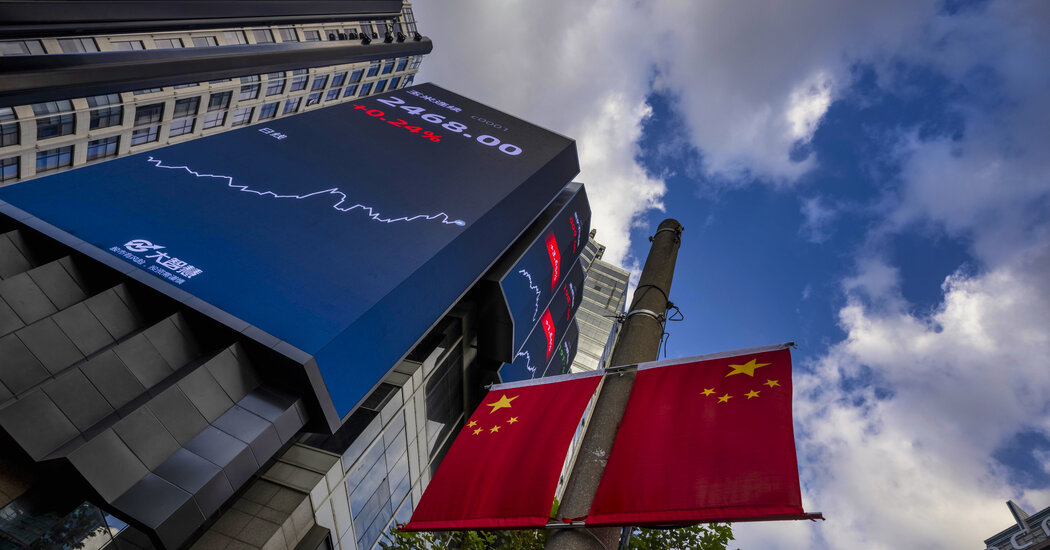 Crushed by $300 billion in debt, Evergrande, one of China’s biggest property developers, is sliding toward bankruptcy. This has prompted fears of a wider property crash or even a financial crisis.

But this is hardly the only crisis besieging the government of Xi Jinping. An unexpected electricity shortage threatens to slow down manufacturing. And for the past year, the government has waged a fierce campaign to regulate China’s vibrant internet companies, spurring hundreds of billions of dollars in investor losses.

The common feature of these crises: All were triggered by government policies. In the eyes of Beijing, these policies are meant to fix deep structural problems in the economy and lay more solid foundations for future growth. To many outsiders, they represent a dispiriting retreat from the market-oriented reforms of the past and signal the end of China’s long economic boom. But forecasts of China’s doom are most likely mistaken, as they have so often been.

True, in the latest quarter, economic growth slowed to a crawl, growing by just 0.2 percent compared with the previous quarter. The next several months will be rockier still. Slower growth in China is unwelcome news for a global economy struggling to regain its footing after the disruptions of the Covid-19 pandemic. But over the next few years, China is likely to regain momentum — in part because of the hard work it is doing now.

The biggest immediate worry is the collapse of Evergrande. Like most Chinese property developers, it relies on two key funding sources: deposits paid by home buyers before construction and huge amounts of debt.

Evergrande’s woes result from a government campaign begun last year to force property developers to reduce their liabilities. It is the latest move in a five-year effort to bring the country’s debt under control. According to the Bank for International Settlements, China’s gross debt level, at 290 percent of G.D.P., has doubled since 2008. While that level is comparable with that of rich countries with well-developed financial systems, it is high for a middle-income country. China’s leaders know that to avoid a financial crisis or avoid a repeat of Japan’s stagnation of the 1990s — the aftermath of a big debt-fueled property bubble — growth in the future must be far less reliant on debt than it has been.

The problem is that by attacking debt in the property sector, regulators risk shutting off a powerful engine that directly or indirectly affects as much as a quarter of China’s economic growth. Problems are spreading beyond Evergrande. Other developers are having trouble repaying their debts. And the sales and construction of new housing are both falling.

The drive to cut real estate debt will almost certainly depress China’s growth in the coming quarters. But it will not lead to a “Lehman moment,” when the implosion of a single heavily indebted company triggers a broader financial or economic collapse: The country has an enormous pool of savings. And the government is now adept at managing meltdowns of major companies, including the private conglomerates HNA and Anbang, Baoshang Bank and Huarong, a huge state-owned asset manager.

The larger question is whether China can maintain a dynamic economy when its government, under Mr. Xi, seems increasingly intent on meddling in the market. The answer: Despite a desire for more state discipline, China has not rejected markets — dynamism will continue.

Some of this state meddling is prudent. The property crackdown is part of a serious drive to cure the economy’s addiction to debt. Similarly, the power shortages that have plagued much of industrial China are due largely to efforts to slash the country’s reliance on coal. China has said that its carbon emissions should peak by 2030 and then decline, with a goal of reaching carbon neutrality by 2060.

One response to the energy shortage has been a long-overdue deregulation of electricity prices. This has allowed generators to pass on some of the impact of higher coal prices to end users. So it is not true that Mr. Xi’s government is implacably anti-market. Beijing, as it has for decades, will continue relying on a combination of state guidance and market forces: The state sets the direction for investment, with day-to-day outcomes dictated by the market.

A more serious concern is the yearlong offensive against privately owned big tech companies, notably e-commerce and the financial technology giant Alibaba, and the ride-hailing company Didi. It’s unclear whether China can ever become a true leader in innovation if it insists on squashing its most successful entrepreneurial businesses.

Yet even here, the story is not black-and-white. The internet crackdown is not really about crushing private enterprise: Private companies in many sectors, including tech hardware, are doing just fine. Rather, the crackdown addresses — in a very authoritarian way — the same anxieties about big tech that governments around the world are grappling with: unaccountable power, monopolistic practices, shoddy consumer protection and the tendency of a tech-heavy economy to drive income inequality.

One final worry is that these moves toward greater state discipline are driven not by economic motives but by Mr. Xi’s desire to reinforce his power, ahead of a Communist Party conference in late 2022 where he expects to gain a third term as the country’s leader. In the long run there is a risk that overly centralized power could degrade the government’s ability to manage the economy. But Mr. Xi also recognizes that his power will not be worth much unless the economy keeps growing.

China will never run its economy in a way that pleases free-market purists. But it has come up with a mixed model that works. And despite the stresses of the moment, it will keep on working.

Arthur Kroeber is a partner and the head of research at Gavekal Dragonomics, a China-focused economic research firm.

The Times is committed to publishing a diversity of letters to the editor. We’d like to hear what you think about this or any of our articles. Here are some tips. And here’s our email: letters@nytimes.com.

Canadian home price growth slows to near standstill in September