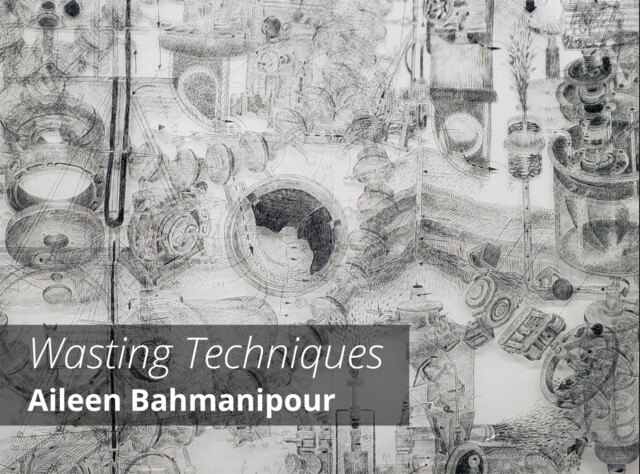 A Kelowna-based artist is showcasing a new type of art exhibit, focusing on a collection of overlapping drawings that are illegible, messy scribbles for contemporary art.

The Iranian-Canadian artist, Aileen Bahmanipour, has created what she expresses as ‘useless drawings that contradict the very purpose of drawing, which is to have something the viewer is able to see.’

Described as both ‘an image-maker and image-breaker,’ Bahmanipour, exhibit if one that took inspiration from milling machines, extraction tools, and other similar industrial machines that separate particles from materials.

The Wasting Techniques exhibit hosts a series of complex drawings are on clear acetate sheets and will also be sprayed regularly with a spitting machine, which will overtime wash away the drawings and turn them into stains on the floor.

The exhibit also includes multiple ways for visitors to interact with the exhibition, either in person or over a live stream. Two cameras have been set up by the artist, one in front of the transparent sheet and one behind.

“We are intrigued to see the evolution of this exhibition over the next 6 weeks as the artworks change and transform from the spitting machine. Bahmanipour has created an exhibition that avoids being static by not only the transformative quality of the work, but the multiple access points for visitors to experience it,” Artistic and Administrative Director, Lorna McParland said in a press release.

Wasting Techniques will be on view in the Main Gallery of the Alternator Centre for Contemporary Art from Jan. 29 to March 13, 2021.

Visitors will also have an opportunity to learn more about Bahmanipour with an upcoming artist talk with them via zoom on Feb. 18. To learn more and register to participate, visit the Alternator Centre’s website.

The art of 'leaking' in the Japanese government – The Japan Times

Richmond Art Gallery (RAG) is partnering with Richmond-based Cinevolution Media Arts Society for a sci-fi exhibition on the ideas of intimacy, presence and cultural memories.

The exhibit takes place in the year 3000, when the nation state has collapsed and physical contact and living spaces have been affected by a viral air pollutant.

“Union is about two beings discovering their ancestral memories through the longing for touch and rituals practiced in their post-apocalyptic wedding ceremony,” reads the event’s website.

According to the RAG, the exhibit will feature an extended reality component – real and virtual environments generated by computer technology – as well as a performance, sculptures and sound and video installations.

“Drawing on parallels between our world and the speculative future while working through the artists’ diasporic identifies, Union is a potent critique of modern surveillance capitalism, but also a gesture towards hope through the generative possibilities of intimacy, performativity and presence,” says the RAG exhibition page.

Union will be exhibited at the art gallery from April 24 to June 5.

Six years ago, scientists used an instrument from Earth to detect gravitational waves — a prediction made a century earlier by Albert Einstein.

The discovery confirmed Einstein’s theory of general relativity and it opened up a whole new way to see the universe.

Now, that new view of the world and beyond is being captured in a show by three multi-media artists who also share a passion for science.

Their exhibit, titled A Mysterious Attraction, will open Thursday at PoMoArts (formerly the Port Moody Arts Centre) and, at 7:15 p.m., they’ll tour the gallery and talk about their work for an online reception via Facebook Live.

“In this project, we engage a force in nature to become our artistic brush,” they wrote in their artists’ statement. “Thus, we hope that the viewers will be inspired to experience our universe in a different way.”

But although their display was influenced by gravitational waves, the art by Edzy Edzed, Pierre Leichner and Bill Westwell also draws on abstract expressionism as well as spin and fluid art.

Westwell, a lifelong artist, is also influenced by the environment.

Tahltan-Tlingit master carver Dempsey Bob is one of six artists across Canada to be recognized with a 2021 Governor General’s Awards in Visual and Media Arts Artistic Achievement Award.

“Dempsey Bob is recognized as one of few master carvers of his Nation who is pushing the art forward, successfully blending contemporary with the traditional style of Tahltan-Tlingit sculptural art, while remaining true to its complex protocols and unique design history,” said nominator and visual artist Jim Logan, in a Canada Council for the Arts media release.

Bob’s works are featured in museum collections and galleries around the world, including the Columbia Museum of Ethnology, the Smithsonian Institution, National Museum of Ethnology in Japan, and Canada House in London. In 2013, he was appointed Officer of the Order of Canada — one of the nation’s highest civilian honours.

The GGArts Awards were created in 1999 by then Governor General Adrienne Clarkson and the Canada Council for the Arts.

The winners, who are selected by a peer committee, receive $25,000 and a medallion produced by the Royal Canadian Mint, and their work is celebrated by the National Gallery of Canada.

Bob has lived in Terrace for the past 14 years, where he serves as a senior advisor to the Freda Diesing School of Northwest Coast Arts at Coast Mountain College.

“We are very proud of the work, talent and perspective Dempsey Bob brings to the students,” said college president Justin Kohlman in a media release.

“He has expertly and compassionately guided hundreds of students through the learning and reclaiming of traditional northwest coast art. We offer Dempsey our heartfelt congratulations.”

The Local Journalism Initiative supports the creation of original civic journalism that is relevant to the diverse needs of underserved communities across Canada, broadening availability and consumption of local and regional news on matters of civic governance. Read more about The Local Journalism Initiative here.  Any questions about LJI content should be directed to: lji@cbc.ca.