A U.S. recovery turbocharged by President Joe Biden’s stimulus package will help power a faster than expected global economic upswing that risks leaving Europe behind, according to OECD forecasts.

The Paris-based organization said it now expects global output to rise above pre-pandemic levels by mid-2021 after major economies showed greater resilience at the end of 2020, and as evidence of vaccine efficacy grows and governments add extra demand stimulus. 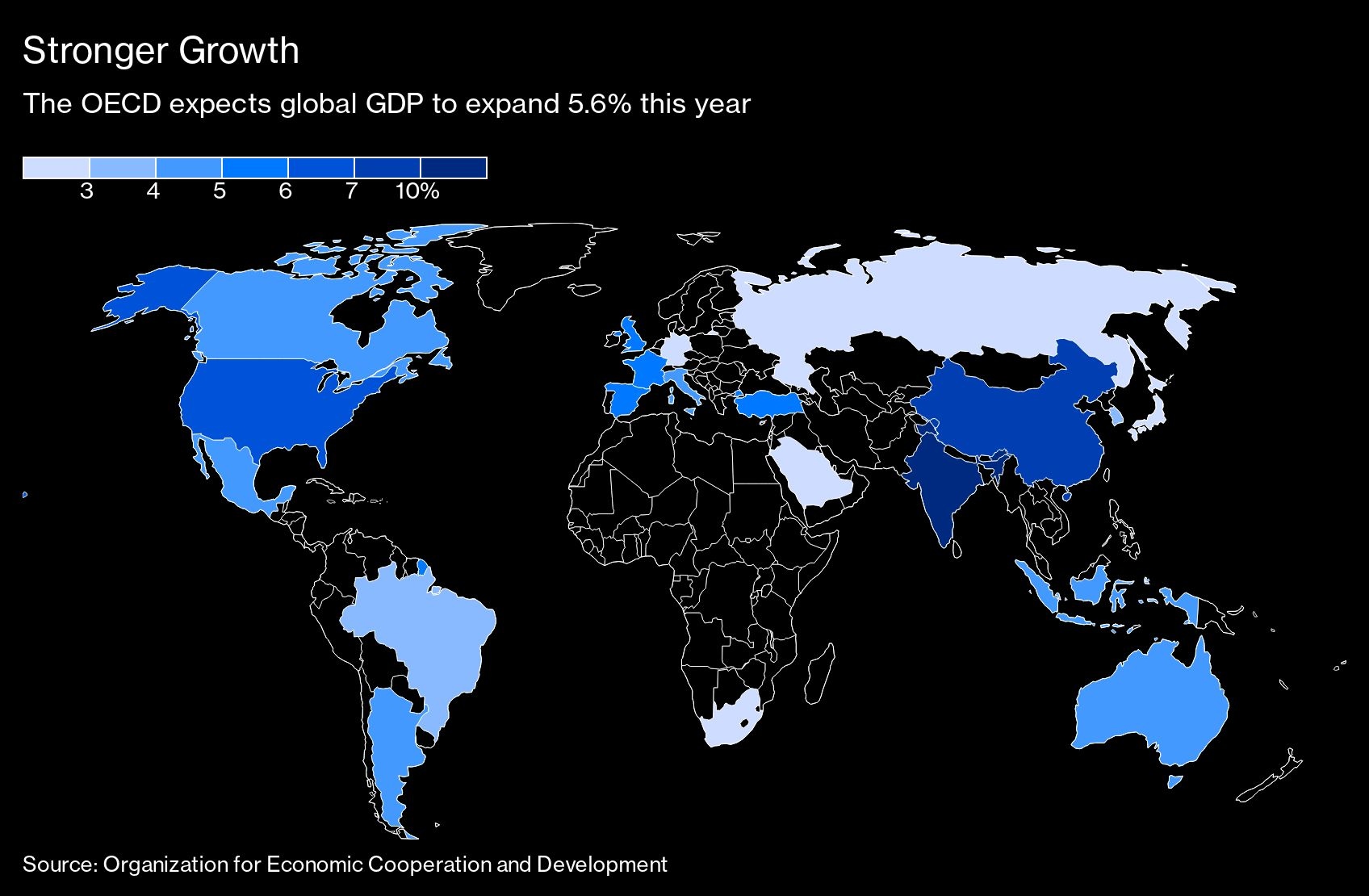 It raised its world growth forecast for 2021 to 5.6 per cent from 4.2 per cent and more than doubled its prediction for the U.S. to 6.5 per cent. OECD models indicate that Biden’s measures will raise output around 3 to 4 per cent on average in the first full year of the package and add a full percentage point to world economic output.

“This will not only boost the U.S. economy, but it will fuel global growth through increased demand in the U.S. and from the U.S. to the rest of the world,” OECD Chief Economist Laurence Boone said at a presentation in Paris.

As a consequence, rising inflation expectations are putting pressure on central banks as they seek to ensure a smooth recovery with prolonged loose policies.

Adding to the difficulties, there’s a growing divergence between sectors and geographies. As the U.S. surges ahead with a 2021 growth rate closer to China’s 7.8 per cent than the euro area’s 3.9 per cent, the OECD expects positive spillovers for some other economies, particularly Canada and Mexico.

But Europe is on a more gradual path with ongoing government restrictions and total discretionary stimulus set to be “relatively mild,” it said, slightly lowering the outlook for France and Italy for 2021.

The OECD forecasts for this year and next suggest that some European economies, including Italy, Spain and the U.K., won’t make up lost GDP in 2022.

The OECD said there are “sizable risks” to the outlook as faster vaccine deployment could further boost spending and confidence, but virus mutations could also thwart the battle against the pandemic, causing larger job losses and more business failures.

That makes producing and deploying vaccines the “top policy priority,” the OECD said. According to Boone, Europe is suffering from poor public health management and more fiscal stimulus without vaccinations would not be effective.

“Countries need to accelerate their vaccination programs to reopen faster their economies — if we are at war against a virus we need to get on a wartime footing,” Boone said in an interview with Bloomberg Television.

The uncertainty means fiscal policies will need to be contingent on the state of economies and more targeted. But the OECD also repeated a warning that governments must err on the side of caution and not tighten policies too fast, as happened in the wake of the global financial crisis.

Central banks should keep extraordinarily accommodative policies in place, even if headline inflation overshoots targets temporarily, the OECD said. For the Federal Reserve, that means it should use its new flexible average inflation-targeting framework to avoid immediate increases in rates, it said. It estimates the lasting impact on inflation from the stimulus plan will be “modest” beyond 2022.