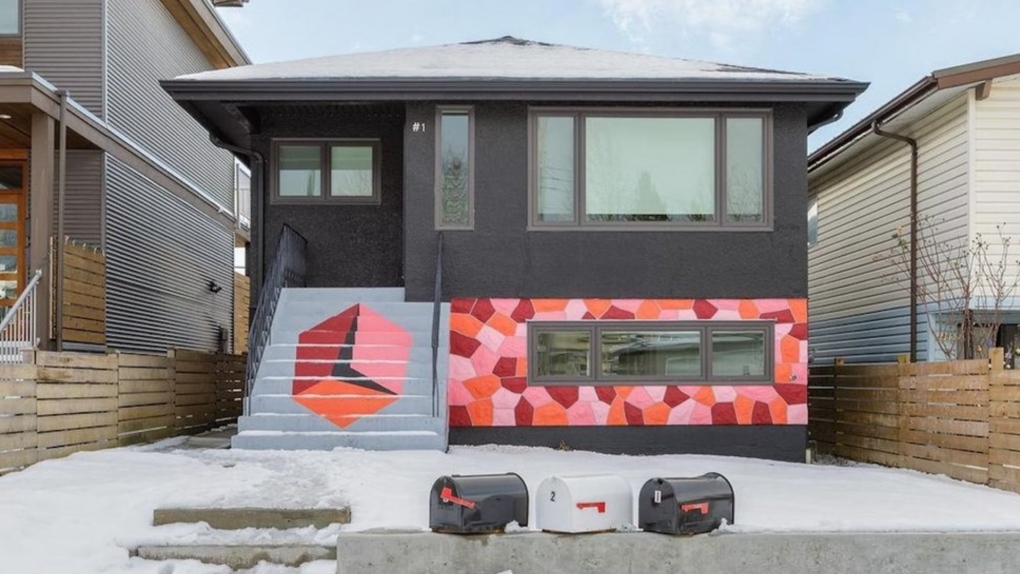 The unusually low listing price for a detached home in East Vancouver that features both a basement suite and laneway house is raising eyebrows online.

The six-bedroom, six-bathroom property on Fleming Street is being advertised for just $1 million – something local realtor Jimmy Ly said would likely attract a frenzy of desperate prospective homeowners.

“What the sellers are doing to this house is going to cause a riot,” Ly said in a viral TikTok video.

“Like I understand listing below market value, but this?”

The property is located in the Kensington-Cedar Cottage neighbourhood in East Vancouver, where the benchmark price of a detached home was $1.74 million last month, according to the Real Estate Board of Greater Vancouver.

That benchmark is just below the home’s appraised value, as of the most recent assessment.

The listing, which was posted last week by YVR International Realty, promises “high rental income and cash flow” between the basement unit and laneway house.

It also boasts some unique bells and whistles, including an eye-catching mural on the front of the property from local artist Juan Pablo Zamudio Cazares.

In another TikTok video, Ly suggested listing the home at $1 million could contribute to what he sees as an erosion in the public’s trust in realtors.

“My problem with this is that it wastes so much of people’s time and it gives us realtors – who already have a bad rep with the public – an even worse reputation,” Ly said.

Speaking to CTV News on Thursday, Ly stressed that he didn’t post the videos to criticize a particular realtor, but to highlight what he believes is an issue within the industry.

“This type of practice creates kind of a false narrative about the real estate market’s prices, and it really leaves buyers disheartened, disappointed – hopeless, really,” he said.

Based on his experience, he estimated the property could easily sell for double the listing price.

“If I were to buy it, hypothetically, I would pay $2 million,” Ly added.

The realtor from YVR International Realty who represents the listing declined an interview with CTV News, but said the property attracted more than 200 groups at an open house last weekend.

While real estate prices in B.C.’s Lower Mainland remain high, the market has been cooling over recent months following a series of interest hikes from the Bank of Canada.

Home sales in the Vancouver area last month were down 9.8 per cent from August, and down a whopping 46 per cent compared to September 2021.

Compared to the 10-year average for the month, they were down 37.5 per cent.

The benchmark price for all types of property was around $1.16 million, which represents an 8.5 per cent decline over the past six months, according to the Real Estate Board of Greater Vancouver.

Canada real estate: Where home prices have grown the most

The property industry now requires high quality photographs, floor plans and virtual tours, so the industry for software providers in the space is booming. The whole are was accelerated during the pandemic when many property viewings migrated from physical to virtual, and this trend has continued to tick upwards.

Players in the space include Walnut, Stonly, Capterra… the list goes on. There is also Matterport which does virtual tours, but its clients are photographers.

Back in 2020, another player, Giraffe360 raised $4.5 million in a funding round led by LAUNCHub Ventures and Hoxton Ventures.

It has a robotic camera, combined with a subscription service, which enables real estate agents and brokers to generate high-resolution photos of properties, floor plans and virtual tours. The subscription gains the owner access to the camera, an AI-based image processing software and cloud storage, and other services.

When estate agents use Giraffe360, this essentially removes photographers from the process.

To date, the company has raised $22m in equity and $9m in venture debt. It was founded in 2016 in Riga, Latvia by two brothers, Mikus Opelts and Madars Opelts, and is headquartered in London, U.K. 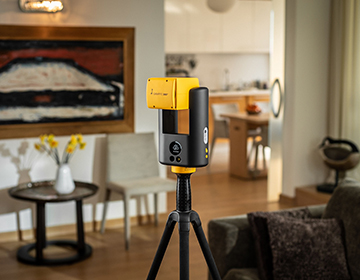 The startup is also launching the latest, upgraded version of its camera, branded the Giraffe Go Cam. This is 30% lighter, which charge faster and comes with 500 GB of on-board storage. The camera uses uses a high-specification sensor, LIDAR laser and robotics.

Founders Fund principal Delian Asparouhov said in a statement: “After being involved in a number of PropTech startups such as OpenDoor, we’ve recognised that some of these tech forward companies aren’t having their needs met, which means that the mass market definitely isn’t having their needs met. Giraffe360 was a no-brainer, and is really well suited to meet the needs of the market from both the hardware and software front.”

Giraffe360 CEO, Mikus Opelts, commented: “We are very excited to partner up with Founders Fund. It is one of the strongest brands in the VC industry, with a strong track record of backing category-defining companies. The new Giraffe Go Cam and funding will help guide the transition toward more immersive experiences of properties online, as the world takes on a more remote, online approach to properties.”

Holiday parties are back this year, baby.

And while the novelty of having somewhere to wear my party shoes again has yet to wear off, the cocktail party conversations remain the same as they ever were: the weather, holiday plans, upcoming travel and, of course, the real estate market.
This is Toronto, after all.

Would you believe me if I said there are people who, presumably in an effort to make benign small talk, ask me how the real estate market is and seem genuinely surprised to hear that things are rocky at the moment?

They indicate a vague awareness that interest rates are going up and slowing things down, but seem shocked to hear what that’s shaking out to mean in terms of the fall from February’s highs.

That was last night.

Confirms what I have long suspected:

Firstly, that Twitter bears very little resemblance to real life. Amen. Because, of course, if one were to extrapolate the state of things based on my (admittedly real estate heavy) Twitter feed alone, one would likely feel certain the world was ending.

And second, that unless you’re a recent buyer with a variable rate mortgage feeling the crunch of the rising rates, you’re probably busy living your life.

Your house may be worth substantially less than it might have been valued at last winter, but to you that was never real since even with the correction it’s likely still up substantially from what you paid.

Unless you’ve bought, sold or refinanced, that gain was entirely theoretical — you were living in your home, not tinkering with your net worth abacus in real time.

Based on what I can tell from a solid two weeks of mixing and mingling, the people who seem to be uncomfortably straddling the two worlds at the moment are the Boomers sitting with a substantial portion of their wealth tied up in their homes. For those whose retirement plans centred upon cashing out and downsizing, perhaps renting a nice bungalow somewhere, the outlook isn’t looking great.

Now there’s an entirely uncertain timeline to contend with. We can’t be sure where the bottom is, when we might finally hit it, when the recovery might start to begin, and when, if ever, we might see prices like that again.

The rental market is tighter than it’s ever been, making the prospect of making a move both daunting and unappealing.

And to add a whole other layer of complexity to the situation, given how unaffordable the market has been for first-time homebuyers, the number of their parents who have pulled equity to help out with a downpayment is probably not surprising at this point. So we’re not actually just talking about people sitting on pots of illiquid gains — they’re also sitting on liabilities.

Of course, the answer is that I don’t know — it really depends.

But I will say that like seemingly all else in this period of uncertainty, kicking the can down the road and hoping things will miraculously improve in the spring doesn’t seem particularly promising. The Fraser Valley housing market is continuing to slow as the holiday season approaches.

The Fraser Valley Real Estate Board (FVREB) processed 839 sales in November in the communities of Abbotsford, Langley, Mission, North Delta, Surrey, and White Rock. Sales are down 6.9 per cent from October and 57.5 per cent from last November. according to the FVREB’s multiple listing service.

“The trends we’ve seen over the past several months will likely continue through to year-end,” said Sandra Benz, President of the Fraser Valley Real Estate Board, in a news release. “While rate hikes have effectively put many buyers and sellers in a holding pattern, we’re still seeing relatively quick turnover for all housing categories, indicating robust opportunities for properties that are strategically priced.”

The FVREB saw a 22.1 decrease in listings in November compared to October and an 18.8 per cent decrease compared to November 2021.

“The market continues to tighten in response to rising interest rates,” said FVREB CEO Baldev Gill in a statement “As a result, individuals are facing additional levels of uncertainty regarding the decision to buy or sell a home.”

The benchmark prices for apartments, townhomes, and single-family detached homes all decreased in November from the previous month. Single-family homes had a benchmark price of $1,404,900, townhomes were $799,400 and apartments were $518,400. Apartments and townhouses increased their price from last November by 5.2 per cent and 3.3 per cent respectively, while single family homes decreased by 6.3 per cent.

The average number of days to sell an apartment in the Fraser Valley during November was 27 days, while townhouses came in at 28 days and single-family detached homes averaged 34 days.

A Look At Canada’s Growing Economy