Despite his first knockout loss in the UFC, Conor McGregor was all class in defeat.

McGregor returned to action for the first time in a year when he faced Dustin Poirier in a rematch in the main event of Saturday’s UFC 257 event in Abu Dhabi. After a competitive first round, Poirier started to take over in the second, landing a series of hard low leg kicks to McGregor that put him in a compromised position.

“The Diamond” would take advantage of his brilliant strategy, dropping and finishing McGregor at just over the halfway point of the round to complete the biggest victory of his career.

While it was all class in the octagon and at the post-fight press conference, Poirier and McGregor shared a moment backstage following their second battle.

Poirier evened up the series at a win apiece on Saturday. McGregor knocked out Poirier in the opening round of their first meeting at UFC 178 in September 2014.

A trilogy fight is of interest to both competitors, but it seems that Poirier will move ahead to compete for the lightweight title, which is currently held by the retired Khabib Nurmagomedov. UFC President Dana White hasn’t lost hope that “The Eagle” will return for at least one more fight. It appears as if those chances are fading away by the hour, though an official decision on the title has yet to be announced.

Sheriff: Tiger Woods 'had no recollection of the crash itself' – Golf Channel

“At the hospital he was asked about it by the investigators and he had no recollection of the crash itself,” Villanueva told CNN.

LCSD deputy Carlos Gonzalez, who arrived at the scene of the accident first, told NBC’s “Today,” “I don’t think he was aware of how gravely he was injured at the time.” In a virtual press conference on Wednesday, Villanueva also said there was no evidence that Woods was impaired during the accident and that deputies did not administer a toxicology test. There are also no plans to charge Woods with reckless driving at this time.

“This is purely an accident,” Villanueva said.

The investigation into the crash, which occurred just after 7 a.m. PST on Tuesday, is ongoing and Villanueva said deputies will use data from the car Woods was driving, a courtesy car from the Genesis Invitational, and possibly Woods’ phone records to determine how fast he was traveling at the time of the accident and if he might have been distracted. 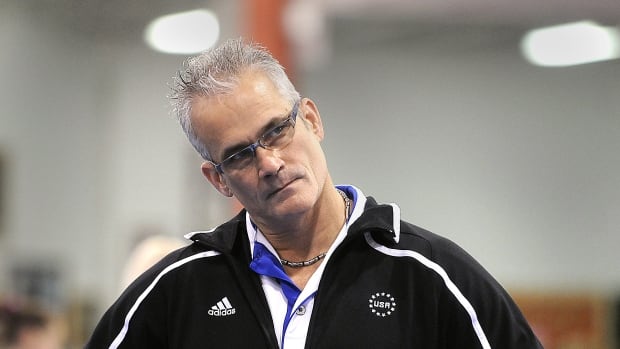 The announcement from Michigan Attorney General Dana Nessel came about three hours after a news conference where Nessel announced that John Geddert was charged with crimes, including sexual assault, human trafficking and running a criminal enterprise. The charges were the latest fallout from the sexual abuse scandal involving Nassar, a former Michigan State University sports doctor.

Nessel said at a news conference that it was her understanding Geddert had turned himself in to law enforcement and would appear at a court arraignment about an hour later. The arraignment never happened.

This is breaking news update, the previous story follows below

A former U.S. Olympics gymnastics coach with ties to disgraced sports doctor Larry Nassar was charged Thursday with turning his Michigan gym into a years-long criminal enterprise by coercing girls to train under him and then verbally and physically abusing them.

John Geddert was charged with two dozen crimes, including forms of human trafficking, a step that prosecutors acknowledged was an uncommon use of Michigan law.

He was also accused of lying to investigators in 2016 when he denied ever hearing complaints about Nassar, who is serving decades in prison for sexually assaulting female athletes in a scandal that counted hundreds of victims and turned USA Gymnastics upside down.

Geddert, 63, was head coach of the 2012 U.S. women’s Olympic gymnastics team, which won a gold medal. He has long been associated with Nassar, who was the Olympic team’s doctor and also treated injured gymnasts at Twistars, Geddert’s Lansing-area gym.

Geddert is accused of recruiting minors for forced labour, a reference to the gymnasts he coached, according to documents filed in an Eaton County court.

Charges against Geddert ‘have very little to do’ with Nassar

“The victims suffer from disordered eating, “including bulimia and anorexia, suicide attempts and attempts at self harm, excessive physical conditioning, repeatedly being forced to perform even when injured, extreme emotional abuse and physical abuse, including sexual assault,” Nessel said.

“Many of these victims still carry these scars from this behaviour to this day.”

The charges against Geddert include two counts of sexual assault against a teen in 2012.

Nessel acknowledged that the case might not fit the common understanding of human trafficking.

“We think of it predominantly as affecting people of colour or those without means to protect themselves … but honestly it can happen to anyone, anywhere,” she said. “Young impressionable women may at times be vulnerable and open to trafficking crimes, regardless of their stature in the community or the financial well-being of their families.”

Assistant Attorney General Danielle Hagaman-Clark said the charges against Geddert had “very little to do” with Nassar.

Geddert was suspended by Indianapolis-based USA Gymnastics during the Nassar scandal. He told families in 2018 that he was retiring.

On his LinkedIn page, Geddert described himself as the “most decorated women’s gymnastics coach in Michigan gymnastics history.” He said his Twistars teams won 130 club championships.

But Geddert was often portrayed in unflattering ways when Nassar’s victims spoke during court hearings in 2018.

“What a great best friend John was to Larry for giving him an entire world where he was able to abuse so easily,” said Lindsey Lemke, now a coach at the University of Arkansas. “You two sure do have a funny meaning of friendship. You, John Geddert, also deserve to sit behind bars right next to Larry.”

Ducharme era begins in Montreal with show of faith in Carey Price – Sportsnet.ca

The Dominique Ducharme Era as head coach of the Montreal Canadiens begins with a decision that will be carefully scrutinized beyond the next 24 hours: he’s giving Carey Price the start against the Winnipeg Jets on Thursday.

Time will tell if it’s the right call.

The numbers lean heavily towards backup Jake Allen, who has a .932 save percentage through seven starts versus Price’s .893. Even the contrast between Allen’s last start (a 36-save masterpiece that gave the Canadiens a point they hadn’t earned in a 3-2 overtime loss to the Ottawa Senators Sunday) and Price’s (a 35-saver on Tuesday, in which he made highlight-reel stops but allowed three crushing goals in a 4-3 shootout loss to the Senators) point to Allen being a safer pick for a team looking to bust a three-game winless streak.

As Allen was running through the starter’s routine with Montreal goaltending coach Stephane Waite at Thursday’s morning skate while Price was getting “maintenance” — Is “maintenance” a nap? A massage? An oil change? This remains as one of hockey’s great mysteries — it looked like Ducharme was leaning his way.

“Carey will be in net tonight,” the coach said, with his words curving towards the outside edge of home plate.

It’s a heck of a pitch to a versatile hitter — a high-powered Jets offence capable of producing against any goaltender, let alone who’s struggled recently. But Ducharme’s decision to throw it says much about his approach to turn around this 2-4-2 skid his Canadiens were on before Wednesday’s news that Claude Julien was removed as head coach and Kirk Muller as associate coach.

Of course, the 47-year-old Joliette, Que., native has tactical changes to implement, but he’s not performing reconstructive surgery in as limited a window as this. He’s had less than a day and not even a full practice to rejig strategies, so if you thought he and new assistant coach Alex Burrows had enough time to dismantle and reassemble the struggling special teams and reinvent the offensive strategy, you might want to adjust your expectations.

But what Ducharme is doing is wiping the slate clean.

He’s right. It’s a new start for the Canadiens. All of them, not just Ducharme.

It’s a new start for Paul Byron, who went from waivers to the taxi squad to the left wing of the fourth line in the last week, to now taking Jake Evans’ place at centre against the Jets. It’s a new start for Artturi Lehkonen, who’s drawing back into the lineup after missing the last two games as a healthy scratch. It’s also a new start for Phillip Danault and Tomas Tatar, who have struggled immensely so far this season but are now being reunited with Brendan Gallagher.

And it’s a new start for a goaltender who desperately needs one.

“I’m not talking about the past,” Ducharme said. “I haven’t talked to the guys about the way we started the year or the way we played 10 days ago, five days ago. We’re starting right now and we’re gonna control what we can control. We’ve got to take care of the things that we can have an impact on, and after that, we believe that if we do that we’re going to be looking up at the scoreboard and the results are going to be good for us.”

The results being good would be a welcome change for the Canadiens — and for Price.

He hasn’t been given an opportunity to immediately undo a bad one until now. The plan in trading for Allen was to give Price rest over a more demanding and shortened season, and it’s been followed to the letter to this point in time. It’s not an excuse to suggest he hasn’t had the chance to gain anything resembling the regular rhythm he’s accustomed to, with Allen sharing the net and the Canadiens having several lags in their early schedule.

Now Price is getting it, and he must take advantage.

Ducharme putting the puck in the Anahim Lake, B.C., native’s glove for Thursday’s game could play huge in the big picture. It’s the riskier call at this juncture, but one being made with the calculation it will raise the goaltender’s confidence.

And Gallagher says that’s what the coach is trying to give the team immediately in the absence of having the appropriate amount of time to drastically adjust the tactics.

“He’s very confident in what he has to say, and when a coach has confidence in himself it instills confidence in the players,” said Gallagher. “He creates a belief and it’s going to work, and I think that’s huge for us. I think it helps players buy into what he’s saying, and then when you buy in and you see results and you see it continue to happen over and over again, that’s where that process comes from.”

Ducharme said he addressed his players and stressed to them that he believes in them. Whether he had a personal conversation with Price to re-affirm that point is inconsequential, because giving him the net speaks louder.