We recently examined how and why the planet Mars could answer the longstanding question: Are we alone? There is evidence to suggest that it was once a much warmer and wetter world thanks to countless spacecraft, landers, and rovers having explored—and currently exploring—its atmosphere, surface, and interior. Here, we will examine another one of Saturn’s 83 moons, an icy world that spews geysers of water ice from giant fissures near its south pole, which is strong evidence for an interior ocean, and possibly life. Here, we will examine Enceladus.

In terms of space exploration, Enceladus was briefly visited by NASA’s Voyager 1 and Voyager 2 in 1980 and 1981, respectively, and wasn’t visited again until NASA’s Cassini spacecraft explored the Saturn system, ultimately performing multiple flybys of this icy moon starting in 2005. It was these flybys that revealed Enceladus’ unique geology and composition.

“Enceladus has many of the ingredients we think are necessary for life: a liquid water ocean beneath an icy shell; an energy source (tidal heating); and nutrients (we’ve detected carbon compounds, which could be used as food),” said Dr. Francis Nimmo, who is a Professor in the Department of Earth & Planetary Sciences at the University of California, Santa Cruz. “In this respect it is not so different from other moons with subsurface oceans, like Europa. What makes Enceladus unique is that it’s giving us free samples of its ocean: there are geysers which jet water vapor and ice crystals into space, where we can scoop them up with a passing spacecraft and analyze them. So, Enceladus is a very good place to go and look for potential life, because we can *directly* sample material from the ocean.”

Remove All Ads on Universe Today

Join our Patreon for as little as $3!

Get the ad-free experience for life

NASA’s Cassini spacecraft used its mass spectrometer to discover organic materials, water vapor, carbon dioxide, carbon monoxide, and a mixture of volatile gases within these geysers, which could indicate the presence of life. Not only do the active geysers indicate the presence of an internal ocean, but it’s also indicative of a source of energy within Enceladus.

“Enceladus has captivated the astrobiology community because it is the first icy ocean world for which we have strong evidence supporting its habitability,” said Dr. Christopher Glein, who is a Lead Scientist and geochemist at the Southwest Research Institute in Texas. “Data from the Cassini mission show that Enceladus has the three ingredients that are required for life as we know it. Those are liquid water, essential elements (including organic molecules), and a source of energy that can be harnessed by life. Recently, we found that the geochemistry of Enceladus’s ocean makes phosphate minerals unusually soluble there. This strongly suggests that phosphorus availability will not impede the prospects for life but should instead serve as an opportunity.”

With the Cassini mission ending in 2017, there are currently no active missions exploring the Saturn system, let alone Enceladus. However, there are several future missions currently under study which could help us further understand Enceladus and whether it can support life. This includes NASA’s Enceladus Orbilander, whose science goals include determining if Enceladus has life, how it has life, and also to locate a suitable landing site for a potential surface mission.

“Orbilander is designed to answer the question of whether there is life in the Enceladus ocean as unambiguously as possible,” said Dr. Nimmo. “Because we don’t know what form life would take, Orbilander uses several different techniques to look for the presence of life-like attributes. And because most of the material that comes out of the geysers ends up back on the surface, Orbilander will look in the “snow” on the surface for signs of life, as well as in material that goes into orbit around Enceladus. After Orbilander, we should have a very good idea of whether or not Enceladus is inhabited.”

While we wait for another spacecraft to re-visit Enceladus, scientists continue to pour over data from the Cassini mission to try and squeeze every last bit of science about Saturn’s icy moon. We know it has an ocean, which indicates the possibility for life, but what kinds of life could be thriving in its oceanic depths? How has it evolved, and is it similar to life on the Earth?

“Enceladus is perhaps the most puzzling of ocean worlds. It’s so small that it should not have an ocean, yet it does. After over a decade of study, we now have a better understanding of how powerful tidal forces keep the interior warm and make Enceladus geologically alive. Could those same forces also sustain biological activity?”

And with this, we wonder if Enceladus will finally answer, “Are we alone?”

Would Mark Watney Have Survived in Real Life, and What This Can Teach Us About Sending Humans to Mars – Universe Today 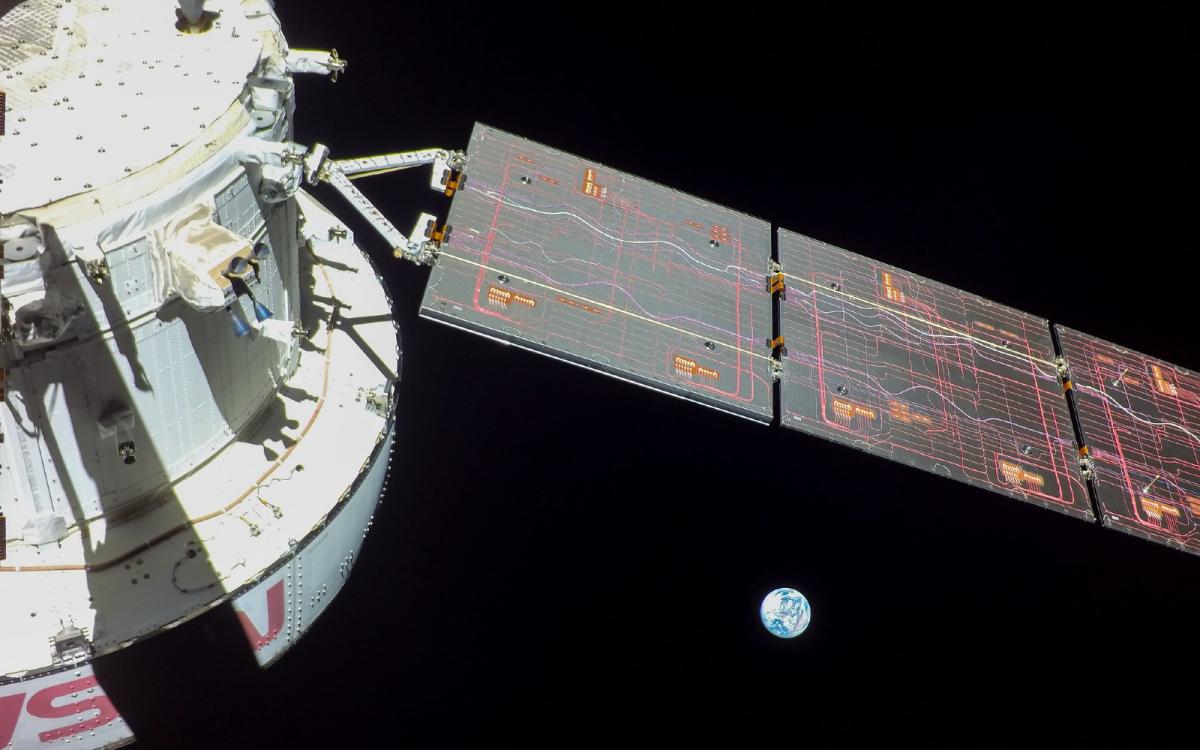 The Artemis 1 Orion crew vehicle has set a new record for a NASA flight. At approximately 8:40AM ET on Saturday, Orion flew farther than any spacecraft designed to carry human astronauts had ever before, surpassing the previous record set by Apollo 13 back in 1970. As of 10:17AM ET, Orion was approximately 249,666 miles ( from 401,798 kilometers) from Earth.

“Artemis I was designed to stress the systems of Orion and we settled on the distant retrograde orbit as a really good way to do that,” said Jim Geffre, Orion spacecraft integration manager. “It just so happened that with that really large orbit, high altitude above the moon, we were able to pass the Apollo 13 record. But what was more important though, was pushing the boundaries of exploration and sending spacecraft farther than we had ever done before.”

Of all the missions that could have broken the record, it’s fitting that Artemis 1 was the one to do it. As Space.com points out, Apollo 13’s original flight plan didn’t call for a record-setting flight. It was only after a mid-mission explosion forced NASA to plot a new return course that Apollo 13’s Odyssey command module set the previous record at 248,655 miles (400,171 kilometers) from Earth.

With a limited oxygen supply on the Aquarius Lunar Module, NASA needed to get Apollo 13 back to Earth as quickly as possible. The agency eventually settled on a flight path that used the Moon’s gravity to slingshot Apollo 13 back to Earth. One of the NASA personnel who was critical to the safe return of astronauts Jim Lovell, Jack Swigert and Fred Haise was Arturo Campos. He wrote the emergency plan that gave the Command and Service Module enough power to make it back to Earth. Artemis 1 is carrying a “Moonikin” test dummy named after the late Arturo.

Earlier this week, Orion completed a flyby of the Moon. After the spacecraft completes half an orbit around the satellite, it will slingshot itself toward the Earth. NASA expects Orion to splash down off the coast of San Diego on December 11th.

NASA has revealed that an asteroid crashed into the Earth on Saturday, November 19. Here’s where this asteroid hit Earth.

In the midst of all the terrifyingly close asteroid flybys, NASA has now revealed that an asteroid actually crashed into the Earth just days ago! NASA keeps a watch on these asteroids by studying data collected by various space and ground-based telescopes and observatories such as the Pan-STARRS, the Catalina Sky Survey and the NEOWISE telescope. However, this asteroid was seemingly missed by all of them and was discovered just hours before impact!

NASA has revealed that the asteroid lit up the sky as it flew over Southern Ontario, Canada on Saturday, November 19. What’s shocking is that this 3-foot asteroid was detected just 3.5 hours before impact! However, such small-sized asteroids do not pose a risk to the planet.

The tech that tracked the asteroid

The asteroid was first spotted by NASA’s Catalina Sky Survey and the observations were then reported to the Minor Planet Center. NASA’s Scout impact hazard assessment system calculated the asteroid’s trajectory and possible impact sites by analyzing the data. Just minutes after getting the data, a 25 percent probability of hitting Earth’s atmosphere was calculated.

Shantanu Naidu, navigation engineer and Scout operator at JPL said in a NASA JPL blog, “Small objects such as this one can only be detected when they are very close to Earth, so if they are headed for an impact, time is of the essence to collect as many observations as possible.”

“This object was discovered early enough that the planetary defense community could provide more observations, which Scout then used to confirm the impact and predict where and when the asteroid was going to hit,” he added further.

The possible impact sites ranged from the Atlantic Ocean off the East Coast of North America to Mexico. According to NASA, the asteroid is likely to have burned up upon entering the planet’s atmosphere and scattered small meteorites over the southern coastline of Lake Ontario.

China plans to build its first base on the moon by 2028, ahead of landing astronauts there in subsequent years as the country steps up its challenge to NASA’s dominance in space exploration.

The lunar base will likely be powered by nuclear energy, Caixin reported. Its basic configuration will consist of a lander, hopper, orbiter and rover, all of which would be constructed by the Chang’e 6, 7 and 8 missions.

“Our astronauts will likely be able to go to the moon within 10 years,” Wu Weiran, chief designer of China’s lunar exploration program, said in an interview with state broadcaster CCTV earlier this week. Nuclear energy can address the lunar station’s long-term, high-power energy needs, he said.

China has ramped up its ambitions in space in recent years, sending probes to the moon, building its own space station and setting its sights on Mars. The plans have put it in direct competition with the U.S. NASA has a rover on the Red Planet and is seeking to return astronauts to the moon this decade for the first time since the Apollo program ended in the 1970s.

Both China and the U.S. are spending billions of dollars to not just put humans on the moon, but also to access resources that could foster life on the lunar surface or send spacecraft to Mars.

In 2019, China became the first country to land a rover on the far side of the moon, and later brought back its first lunar samples. The base is intended to be the first outpost on the moon’s South Pole, an area scientists think is the best place to find water. NASA is also targeting that part of the moon. China aims to eventually expand the base into an international research station.