By putting the most common tools and functions right under your fingertips, the PenPad hopes to make using the iPad’s most famous sketching/painting app much easier by eliminating the hassle of navigating the Procreate interface. Instead, almost like the way a Numpad makes accessing numbers easy, the PenPad gives you access to 22 different functions that you’re most likely to use while sketching on Procreate, from increasing and decreasing brush size, accessing the color wheel, switching between brush and eraser, or just bringing up the color wheel or eyedropper tool. The fact that it’s a compact hardware accessory means you can paint with one hand while intuitively pressing buttons with the other to make your workflow tonnes faster. 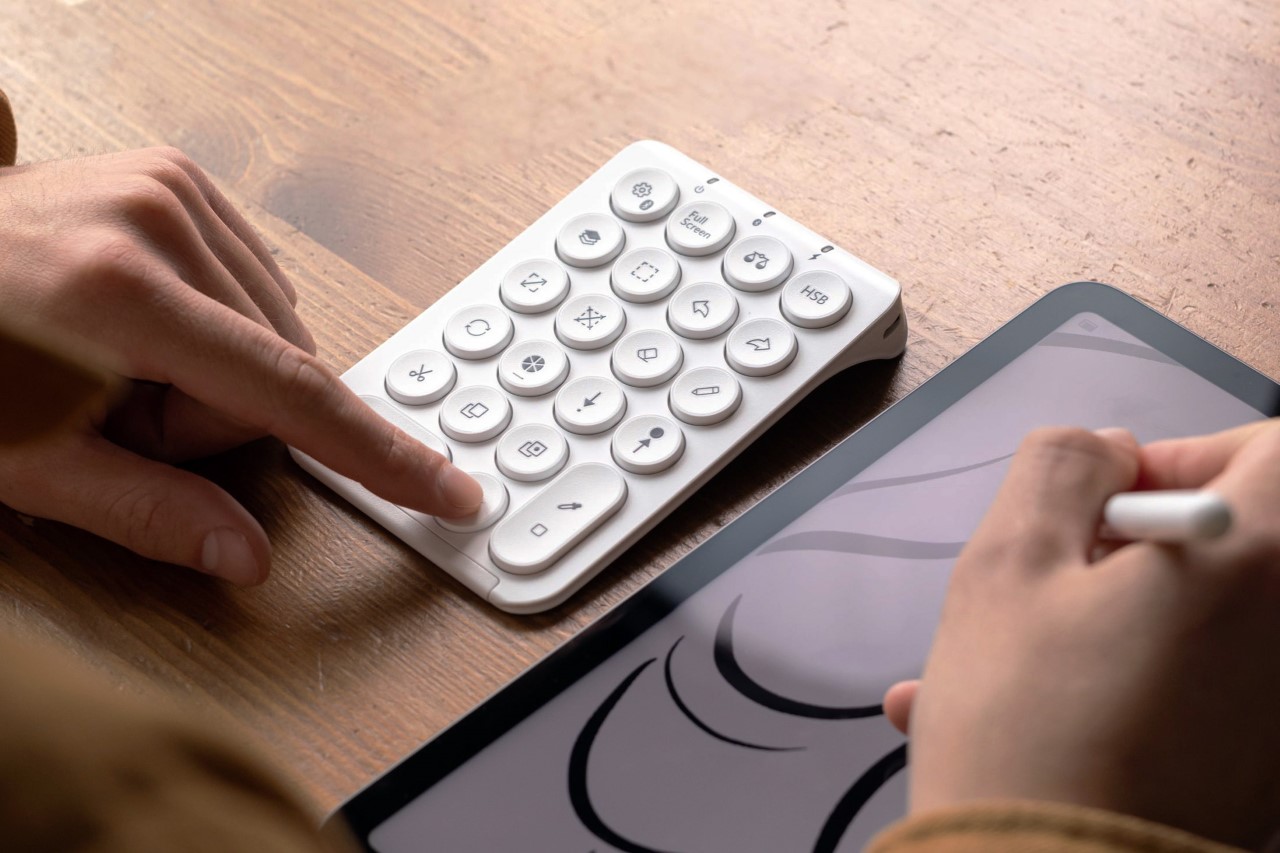 Available in Black and White variants, the PenPad connects via Bluetooth to your iPad and automatically begins working with the Procreate app right out of the box. The 22 concave buttons on the PenPad are laid out in a way that makes them easy to use, and pressing buttons allows you to actively perform tasks like see your layers, toggle the selection tool, cut, copy, paste tools, etc. The buttons work rather seamlessly, almost like a wireless keyboard would, resulting in faster workflows because your mind is focused on creating rather than navigating the UI anymore. 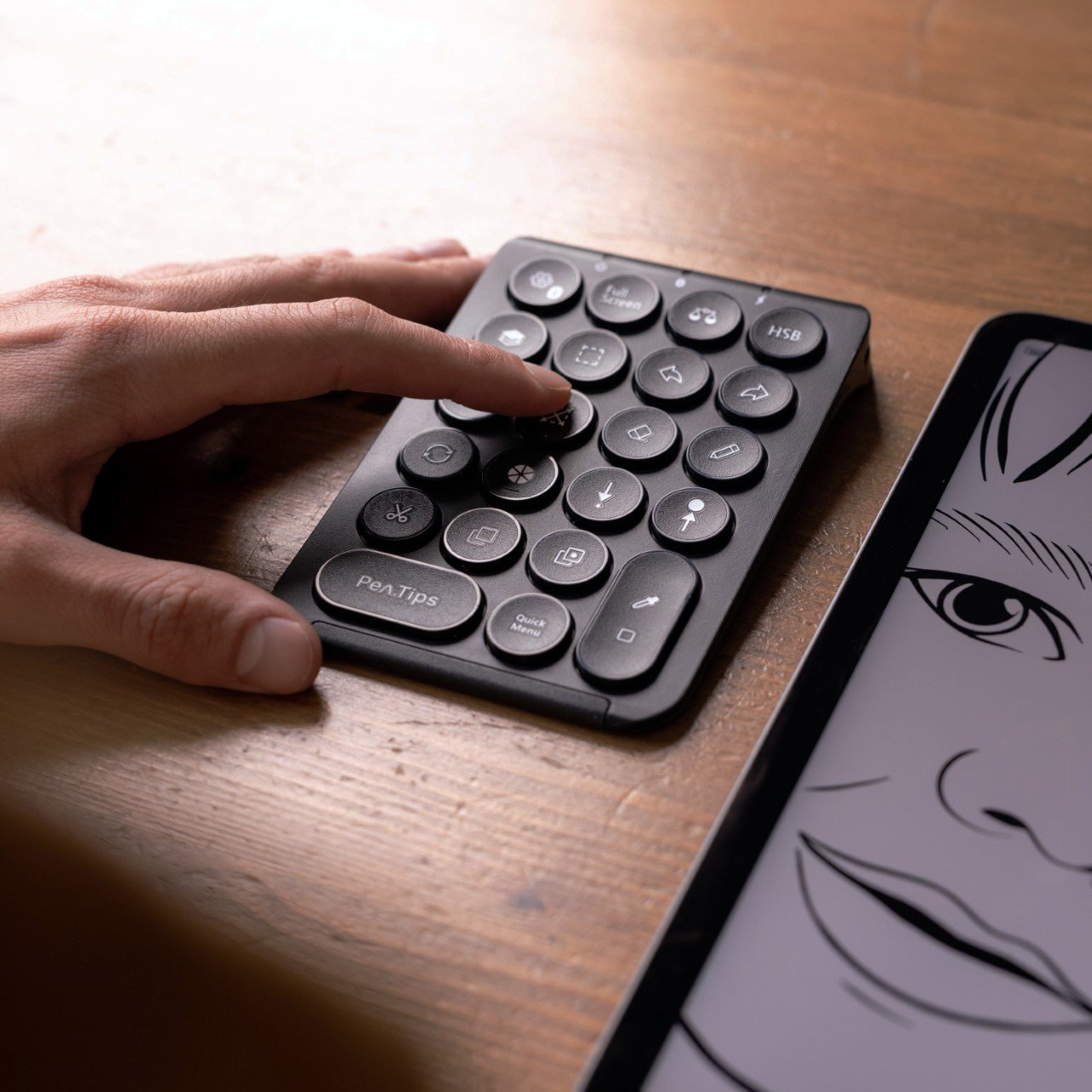 What PenPad really does is reduce the time it takes for your eyes to wander and your hand to follow it around Procreate’s UI. More than 90% of the Procreate screen is the drawing canvas, which means the other elements (the buttons, menus, etc.) are laid out in a way that gives the canvas the main importance. Drawing on the canvas is easy, but using other features involves shifting your focus from the canvas to locate the appropriate toolbar, drop-down menu, etc. It takes a mere second, sometimes up to 10 seconds, but all this adds up rather quickly when you’re working with large files and multiple layers. To avoid this, the PenPad just puts common functions under your fingertips. This way, your dominant hand can sketch on the screen, while your non-dominant hand rests on the PenPad, away from the touchscreen display. Once your fingers get a hang of the PenPad’s layout, it becomes even more intuitive and rapid! 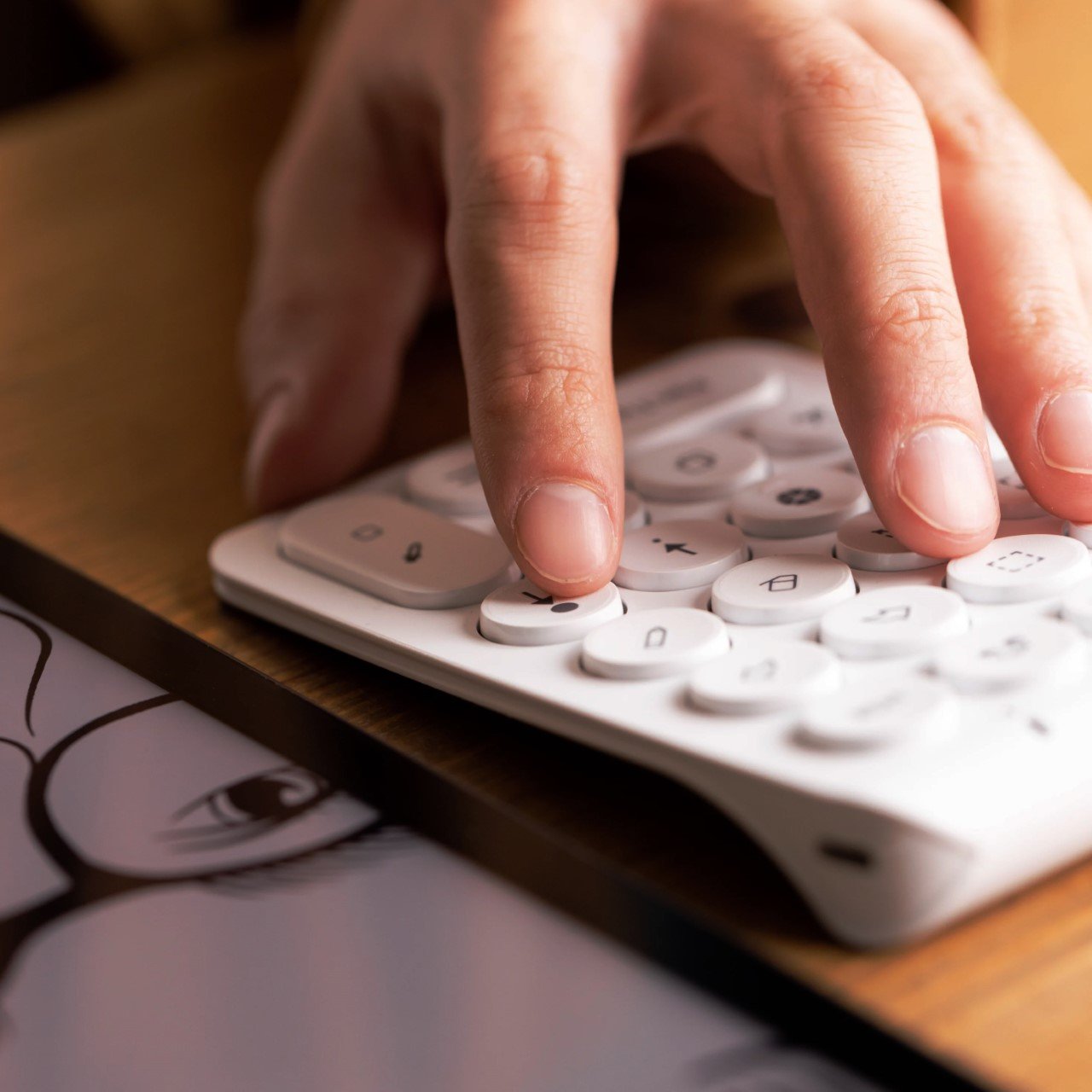 The tiny wireless device comes with a format that seems rather calculator-ish. It’s relatively flat, barring a bump at the top that makes the PenPad rest on surfaces at an angle – a feature that actually helps make it more ergonomic. The accessory is still rather flat, and slides right into your backpack, tablet/laptop sleeve when you’re not using it. 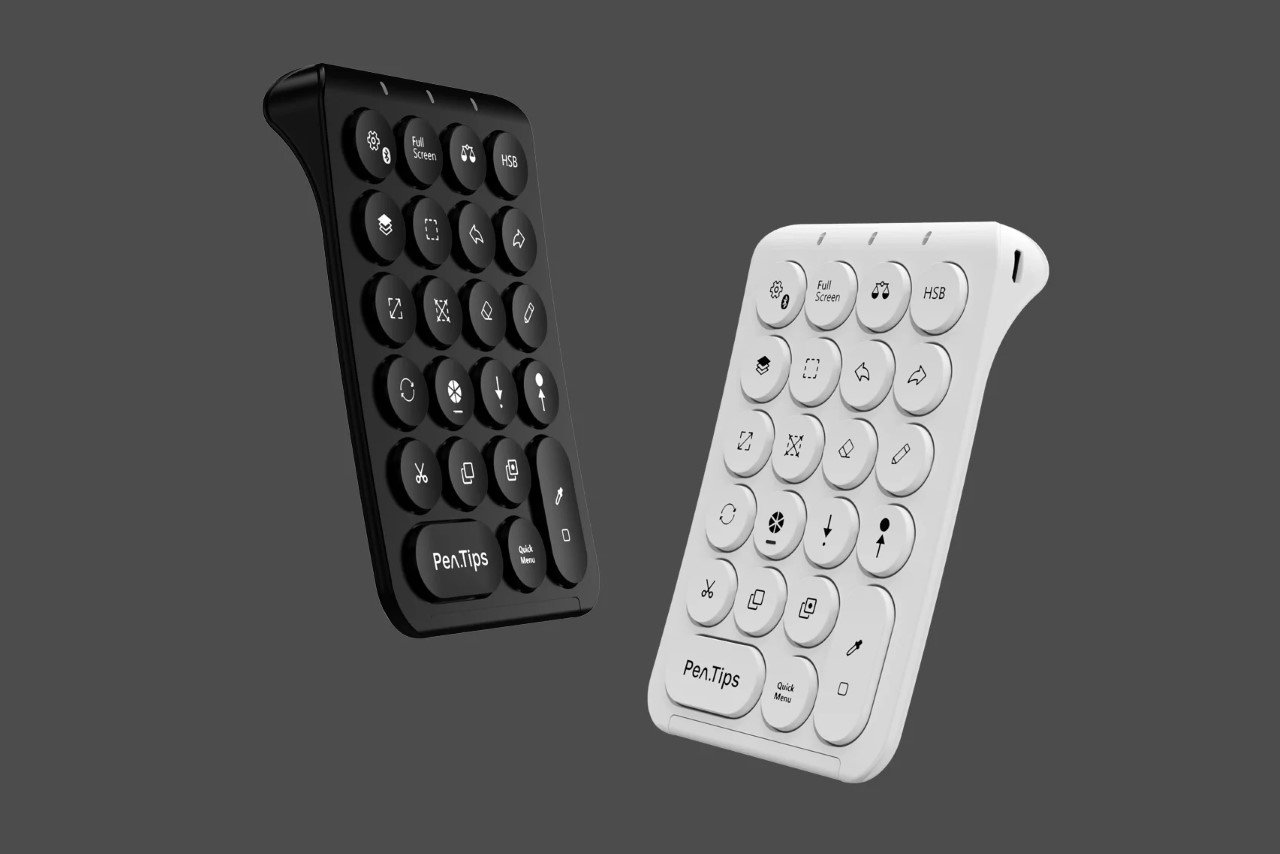 The PenPad works seamlessly with iPads running iPadOS 14.4 and above, although there are a few shortcomings. For starters, it doesn’t work with any other sketching app – so you’re really limited to Procreate. It doesn’t work with Android tablets either, given that Procreate isn’t available for the OS. The buttons aren’t reprogrammable either, so you can’t quite map them to work on other software for the iPad or even the laptop. It’s strictly bound to one app for one device category. Another user also pointed out that the PenPad lacks the three most popular actions performed while digital sketching – pan, rotate, and zoom. To be able to perform them, you need to take your hand off the PenPad and pinch, tap, swipe on the iPad’s touchscreen.

That doesn’t take away from the fact that the PenPad still DOES speed up your workflow. It’s quite a must-have for most digital artists who use the software for work (or even for recreation). The PenPad comes with a 100 mAh battery built-in that gives it a 5-day battery life, but unfortunately, it charges via MicroUSB (unlike the USB-C charging on the iPad Pro), so you’ll sadly need to carry an extra cable with you wherever you go. 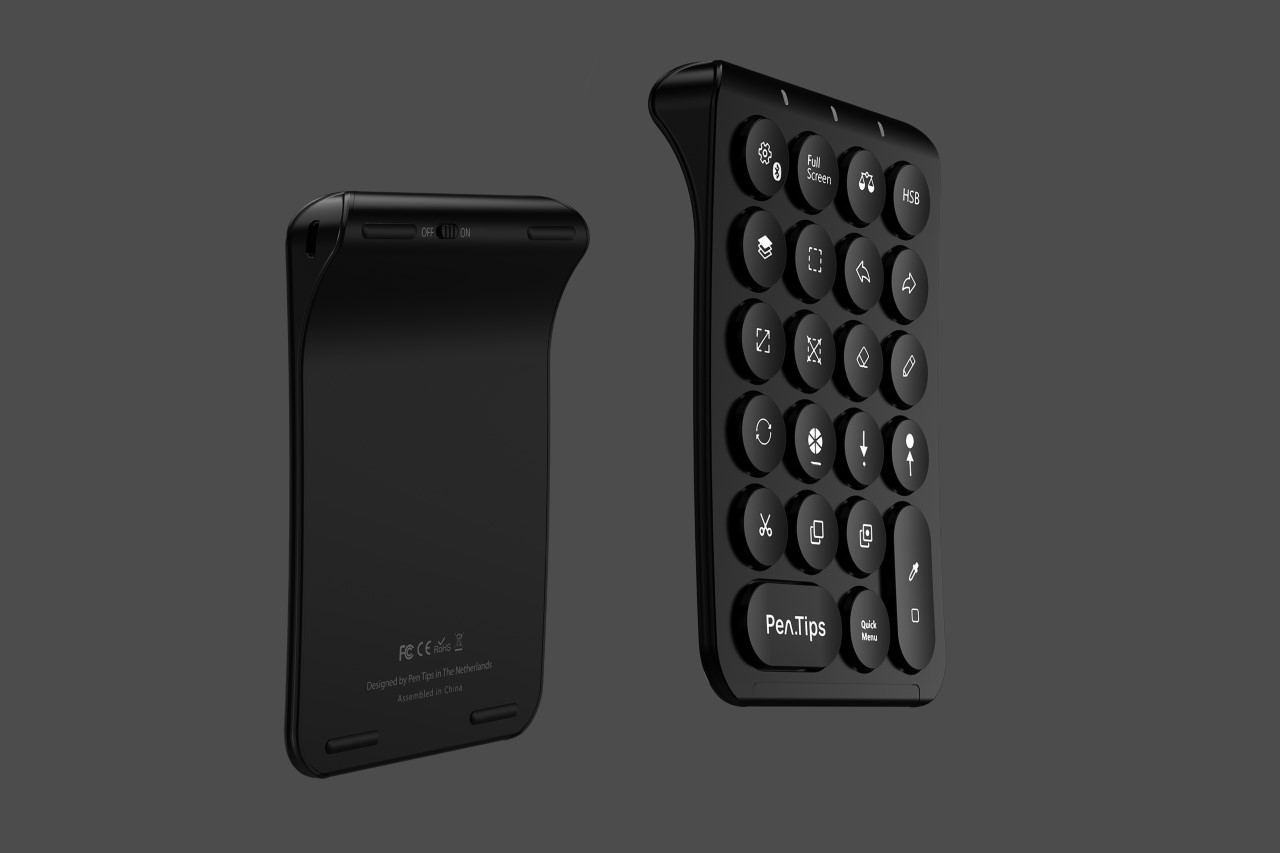 OpenAI, which was sued alongside Microsoft and Github Inc.—companies that helped develop Copilot—said in court documents filed on Thursday that the complaint had major procedural problems and relied mostly on unspecific allegations.

OpenAI is the company behind other popular AI programs like the image-generating DALL-E and the chatbot ChatGPT; this month it received a $10 billion investment …

In a blog post published this week, video game captain of industry Electronic Arts (referred to as EA henceforth) outlined several of the accessibility features included in Motive’s popular horror title Dead Space. The Redwood City-based EA’s announcement coincided with the release of the updated game late this week.

As noted on the game’s website, the story of Dead Space revolves around “the dark secrets behind the events aboard the USG Ishimura through the final logs of the ill-fated crew and your encounters with the few survivors that remain.” The new version of the game, available on PlayStation 5, Xbox Series X/S, and PC, is a remake of the classic version with what the developer calls “jaw-dropping visual fidelity, suspenseful atmospheric audio, and improvements to gameplay.”

“Dead Space is a classic that changed how horror games were perceived when it was released,” said lead senior experience designer Christian Cimon in a statement included in the post. “[It] made sense to revive that game and share it with a whole new generation. But the game came out 15 years ago, when accessibility features were less common. Things like subtitles, menu narration, control-remapping, and the like are pretty much expected now [by the disability community], so we wanted to make sure the remake aligns with today’s highest standards.”

EA notes Motive has made Dead Space more accessible and inclusive by building in a number of “customization options with some fine-grained control.” Amongst many others, they include colorblind settings, control customization, and aim assistance. There’s also the ability to have screen reader-like narration of menus, as well as options to reduce motion effects, enable subtitles for dialogue, and display content warnings in anticipation of more gruesome moments.

There’s a video demoing accessibility in Dead Space on its YouTube channel.

All told, Motive is acutely aware that supporting accessibility is an evergreen endeavor that never finishes. The company is committed to making Dead Space even more inclusive going forward, with Cimon astutely noting the inclusivity ultimately benefits gamers yet also helps the business too. Accessibility features, he said, help the game feel more accessible and approachable by making it appealing to the widest possible swath of potential players. Ergo, more players means more business for the development studio to pour into future innovations.

As the axiom goes, a rising tide lifts all boats.

“[Working on accessibility is] about addressing and removing barriers that come between our players and games,” said EA’s program lead for game accessibility Morgan Baker in the post. “Accessibility improves experiences for people of all abilities and backgrounds, allowing for better products and ensuring that more players can have an enjoyable experience. And the work done by the Dead Space team shows that increasing accessibility continues to be a priority for us.”

For Baker, it’s heartening to see Motive so committed to accessibility.

“It’s so motivating to see a studio like Motive so invested in providing players more choices around how they consume horror content,” Baker said. “It’s inspiring. And we hope to see more studios consider the same. Because ultimately, when we can all play games, we all win.”

Just a few days ago we got some detailed pricing info for the Galaxy S23 series in Germany and Spain, WinFuture is here with some more finalized sums for the German market.

A closer comparison to the S22 series pricing reveals Samsung will be charging a €100 premium on the entry-level S23 and S23+ models. The base model S23 Ultra gets €50 price increase though the new model should arrive with 256GB storage instead of 128GB on its predecessor. The top-dog 12/512GB Galaxy S23 will be a cool €130 costlier this time around. Pre-orders from Samsung.com are expected to get the storage upgrade promos.