Through the lens of visual art, literature, film, as well as Edugyan’s own lived experience, her upcoming lecture series, which will also be published as a book, will examine the depiction of Black histories in works of the imagination, while challenging accepted versions of the Black experience with new perspectives.

“This year has seen incredible upheaval and unrest, and a widespread conversation about race, which has been long overdue,” Edugyan said. “This is a book about where we find ourselves in the moment, but it’s also about who we’ve been and hope to be.”

Edugyan’s 2021 CBC Massey Lectures, Out of the Sun: On Art, Race, and the Future, will be broadcast later this fall on CBC Radio One’s IDEAS, and will be available online through CBC Listen. The book will be published in September 2021 by House of Anansi Press.

The cover of Out of the Sun features a painting called Yoked by Colorado-based artist Ron Hicks. He is among a number of contemporary Black artists Edugyan will highlight in her lectures.

Born in Calgary, Edugyan is a two-time Scotiabank Giller Prize winner. First, for her 2011 novel, Half-Blood Blues, which centres on the disappearance of a young Black German jazz musician at the hands of the Nazis in occupied France.

She won again in 2018 for Washington Black, an epic work of historical fiction, which examines race and identity. Both books were also finalists for the Booker Prize.

The author on how she relates to the 11-year-old protagonist, who escapes life as a field slave in the cane fields of Barbados. 1:16

The CBC Massey Lectures is a partnership between CBC, House of Anansi Press and Massey College at the University of Toronto. For the last six decades, it has provided a forum where contemporary thinkers can explore important issues of the time, including modern capitalism, the Indigenous experience and imagination, and the impact of debt on human societies. 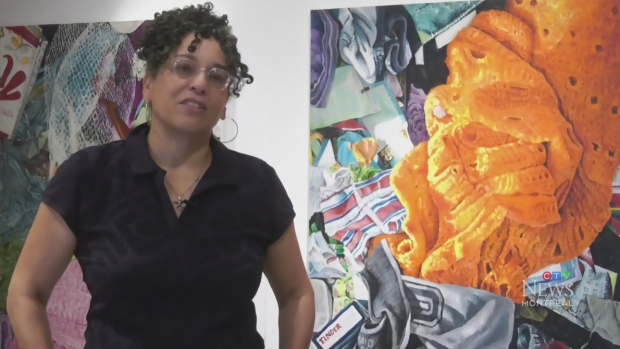 MONTREAL —
With many Montreal storefront real estate lying empty, some landlords have turned to the arts in a bid to bring people back downtown.

Where some would see a crisis in the decimating effect that online shopping and the COVID-19 pandemic has had on brick-and-mortar stores, Frederic Loury, who runs the Art Sousterrain festival, saw an opportunity.

“During the pandemic, I noticed it was a necessity to build a bridge between real estate and emerging artists,” he said.

One of those artists, Dana Edmonds, now has storefront space in Alexis Nihon Plaza.

“I thought it was a really cool idea because I got to expose art, which doesn’t get exposed a lot,” she said. “It’s hard to get into galleries in the first place, so at least we can show our work.”

Edmonds is sharing her space with fellow artist Florence Gagnon, who said the initiative is giving people who don’t normally go to art galleries a chance to see what local talent has to offer.

“I think it’s a beautiful way to integrate art into places that don’t usually have it,” she said.

For the landlords, it’s a smart marketing opportunity and a way to get people shopping again.

“They were kind of afraid of coming back to Montreal, so basically this will make them want to come back and shop and visit some emerging artists that we have with Art Sousterrain,” said Alexis Nihon general manager Danny Thery.

Edmonds says that while her work might be in a store, she isn’t giving a hard sell to curious window shoppers.

“My work is kind of political, It’s commentary about over-consumption, mental health, climate change. I like the dialogue,” she said. “If I sell something, that’s great. If people just look at garbage a little differently, then I’m happy.”

Thus far, there are 30 stores being lent to artists downtown. Loury said he believes mixing art and retail will become a trend.

“Others have to rethink the model if they want to survive.”