Canada’s economy contracted in October for the first time in eight months, as the United Auto Workers strike in the U.S. weighed on plant production.

Goods-producing industries dragged on October’s print, falling 0.5 per cent on the month. Within that sector, manufacturing was down 1.4 per cent, the fourth decline in five months.

The services-producing industries were little changed with strength in real estate and transportation and warehousing helping to offset declines in retail and wholesale trade.

Are you optimistic about the outlook for Canada’s economy in 2020?

Overall, 13 of 20 sectors posted increases, suggesting the weakness was largely isolated to a few key industries.

• Although the slowdown was expected following disappointing reports for the month across wholesale, factory and retail sales, October’s GDP result will make it harder for the Canadian economy to reach the Bank of Canada’s 4Q forecast of 1.3 per cent annualized

• Broad-based declines in manufacturing were the largest downside contributor with a 2.5 per cent contraction in the transportation equipment subsector; that’s due in part to the auto strike which caused some Canadian plants and parts producers to scale back 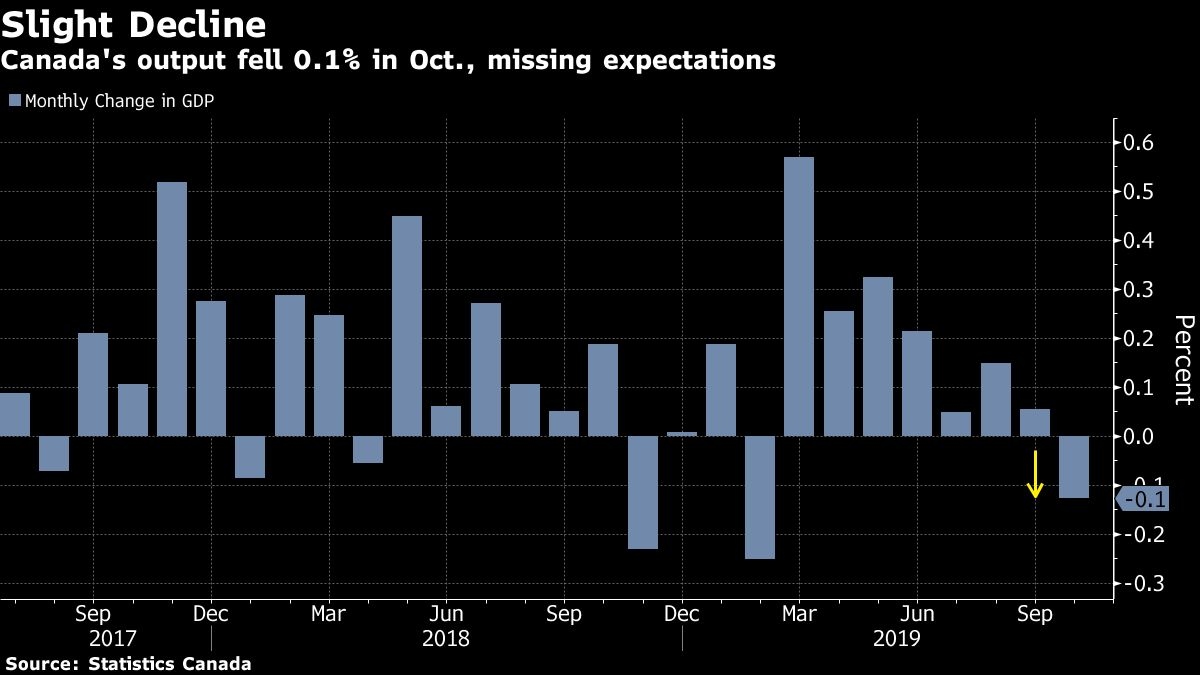 • Other weak points include retail trade down 1.1 per cent in October, the largest decline since March 2016 and wholesale trade, down one per cent on the month

• Spots of strength include real estate, the largest upside contributor, with agents and brokers up 0.7 per cent on gains in Vancouver and Ottawa. Transportation and warehousing grew 0.6 per cebt in October with eight of the nine subsectors up; The professional services sector expanded 0.3% on the month led by growth in computer systems design and related services

• On an annual basis, Canada’s economy grew 1.2 per cent in October, missing forecasts for 1.4 per cent, and down from a revised 1.5 per cent in September