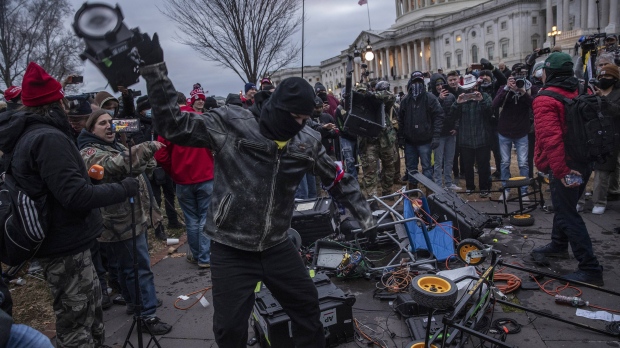 The Justice Department has rounded up several new defendants this week accused of destroying thousands of dollars’ worth of professional broadcast equipment outside the U.S. Capitol on January 6, in a scene captured on multiple videos showing Trump supporters gleefully taking out their anger at the mainstream media.

One new defendant was arrested Thursday, according to court records and the Justice Department, and three others were charged earlier this week with property destruction.

The new arrest records describe how part of the pro-Trump crowd outside the Capitol on January 6 turned their efforts toward news media on the scene, causing professional journalists to leave behind piles of cameras, tripods, lights and other equipment, including some marked as belonging to The Associated Press.

The crowd then stomped on the equipment, and some rioters stole items, investigators say. In the new cases, some of the rioters were recorded on video and in other communications smashing equipment, rejoicing about how they had ransacked the news setups, then posing as reporters.

Prosecutors say one media outlet lost more than $30,000 worth of equipment.

RELATED: How CNN obtained the dramatic videos of the U.S. Capitol riot

The cases are part of a spate of charges in recent weeks where prosecutors have focused on targeted episodes of violence during the riot.

Joshua Haynes, who was arrested on Thursday in Roanoke, Virginia, was recorded on camera slamming camera equipment into the ground as the crowd cheered, the Justice Department said. During the chaos, Haynes texted pictures of the destroyed media equipment and himself standing in front of it. He wrote in one run-on sentence in a text message that “we had destroyed tens of thousands of dollars of their video and television equipment here’s a picture behind me of the pile we made out of it,” investigators said in court.

“I want to get busted for tearing up the nations capital and the fake news,” Haynes also texted, though he acknowledged he wore a face mask during the attack, according to his charging documents.

Zvonimir Jurlina of New York, who was also charged in the destruction, cheered on the stomping and encouraged the crowd to loot the media setup, prosecutors say. He offered a lighter to another rioter, who tried to set the equipment on fire, investigators say.

In video of the scene, Jurlina announced, “I’ve got a souvenir.” He held up an orange microphone with a German broadcaster’s logo. “This is reporter Zykotik coming to you live,” he said, recording himself, prosecutors say.

Investigators also allege Jurlina said on a video that there was “breaking news,” while simultaneously breaking equipment.

Another of the defendants, Chase Allen, told investigators that several people had stomped the media equipment, sprayed it with Axe body spray and tried to set it on fire. Allen told law enforcement he was trying to pose as part of the rioting crowd, but was attempting to move cords and a tripod camera out of the area the rioters were trying to burn.

However, prosecutors accuse Allen of taking part in the violence. He “was seen repeatedly stomping on media equipment, to include a pelican case, and yelling at media members to leave the area in an apparent attempt to disrupt the media from continuing with live broadcasts of events at the U.S. Capitol that day and to express general disdain for the media,” investigators wrote in his charging papers.

A day after the riot, Allen, who appears to run a YouTube channel, was arrested for jaywalking outside the FBI Las Vegas headquarters, where he said he was taking part in a so-called “1st Amendment audit” of law enforcement, according to Justice Department court filings.

“There were people that smashed stuff, and maybe stole stuff. I’m sure they’ll be prosecuted, or they probably should be,” Brown said on the video, according to investigators who identified him.

Last week, in the first case against a riot defendant who allegedly harmed a journalist, prosecutors said Shane Woods “ran into and tackled” a professional photographer. He was arrested in Illinois.

Woods and the others charged with smashing media equipment haven’t yet entered pleas in court.