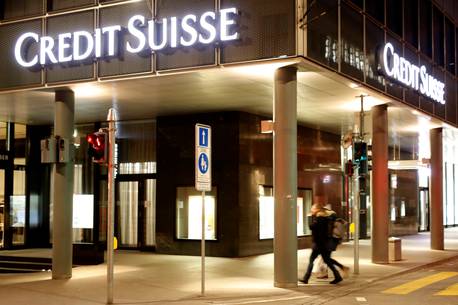 ZURICH (Reuters) – Credit Suisse said on Thursday that it was wrapping its global markets and investment banking divisions into a single unit, as Chief Executive Thomas Gottstein puts his first major strategic stamp on the bank.

Switzerland’s second-biggest bank also posted a 24% rise in second-quarter net profit to 1.162 billion Swiss francs ($1.27 billion), blowing past the mean estimate for 700 million Swiss francs in the bank’s own poll of 17 analysts.

“We are today announcing a series of strategic initiatives to improve effectiveness and to generate efficiencies,” Gottstein, who became CEO in February, said in a statement, as he unveiled the plan to merge the investment banking units.

The integration also includes its Asia-Pacific markets business, which previously sat under a regional division.

The bank said it was aiming to generate run-rate savings of approximately 400 million francs annually from 2022 onwards through various strategic measures announced.

Credit Suisse said it will also combine its compliance and risk functions under one head.

The bank said it was planning to pay the second half of its 2019 dividend later this year, adding its board would review its share buyback plans in due course.

Rival UBS earlier this month signalled the possibility of resuming share buybacks later this year after a stronger-than-expected performance from its investment bank helped it overshoot expectations for the quarter.

The move to form a globally integrated investment bank marks a departure from the strategy under previous CEO Tidjane Thiam, who repositioned the lender to focus on wealth management and split the investment bank into two divisions.

Credit Suisse has faced criticism over the drag of its capital-intensive investment banking operations, which typically generate far less income than wealth management versus their costs, but has insisted the activities are necessary to service its ultra-wealthy clients.

Both its trading and dealmaking units have hurt results over recent years, with trading marking an improvement in late 2018, just as its dealmaking began to slide.

However the units performed well in the second quarter ahead of the integration, as a frenzy of trading activity and companies shoring up their balance sheet pushed up earnings.

The bank posted a 71% rise in profit at its global markets division, fuelled by a 42% jump in fixed income revenue.

The investment bank’s profit also jumped, with a strong rise in earnings across debt and equity underwriting as well as from advising on M&A deals – outperforming much of Wall Street which saw advisory revenue fall.

Wealth management, meanwhile, saw earnings flag slightly after bumper trading in the first quarter, with its international wealth management unit posting a 22% drop in profit as lower rates ate into margins and it set aside money for potential loan losses.

The Centre for Research on Energy and Clean Air (CREA) said that the amount of capacity shelved or cancelled since 2017 was 4.5 times higher than the amount that went into construction over the period.

Coal-fired power is one of the biggest sources of climate-warming carbon dioxide emissions, and the wave of cancellations also reflects rising concerns about the sector’s long-term economic competitiveness.

Since 2016, the top 10 banks involved in global coal financing were all Chinese, and around 12% of all coal plants operating outside of China can be linked to Chinese banks, utilities, equipment manufacturers and construction firms, CREA said.

But although 80 gigawatts of China-backed capacity is still in the pipeline, many of the projects could face further setbacks as public opposition rises and financing becomes more difficult, it added.

China is currently drawing up policies that it says will allow it to bring greenhouse gas emissions to a peak by 2030 and to become carbon-neutral by 2060.

But it was responsible for more than half the world’s coal-fired power generation last year, and it will not start to cut coal consumption until 2026, President Xi Jinping said in April.

Environmental groups have called on China to stop financing coal-fired power entirely and to use the funds to invest in cleaner forms of energy, and there are already signs that it is cutting back on coal investments both at home and abroad.

Following rule changes implemented by the central bank earlier this year, “clean coal” is no longer eligible for green financing.

Industrial and Commercial Bank of China, the world’s biggest bank by assets and a major source of global coal financing, is also drawing up a “road map” to pull out of the sector, its chief economist Zhou Yueqiu said at the end of May.

Bank of Montreal expects its earnings contribution from the U.S. to keep growing, even without any mergers and acquisitions, driven by a much smaller market share than at home and nearly C$1 trillion ($823.38 billion) of assets, Chief Executive Officer Darryl White said on Monday.

“We do think we have plenty of scale,” and the ability to compete with both banks of similar as well as smaller size, White said at a Morgan Stanley conference, adding that the bank’s U.S. market share is between 1% and 5% based on the business line, versus 10% to 35% in Canada. “And we do it off the scale of our global balance sheet of C$950 billion.”

Shares of GameStop Corp lost more than a quarter of their value on Thursday and other so-called meme stocks also declined in a sell-off that hit a broad range of names favored by retail investors.

The video game retailer’s shares closed down 27.16% at $220.39, their biggest one-day percentage loss in 11 weeks. The drop came a day after GameStop said in a quarterly report that it may sell up to 5 million new shares, sparking concerns of potential dilution for existing shareholders.

“The threat of dilution from the five million-share sale is the dagger in the hearts of GameStop shareholders,” said Jake Dollarhide, chief executive officer of Longbow Asset Management. “The meme trade is not working today, so logic for at least one day has returned.”

Soaring rallies in the shares of GameStop and AMC Entertainment Holdings over the past month have helped reinvigorate the meme stock frenzy that began earlier this year and fueled big moves in a fresh crop of names popular with investors on forums such as Reddit’s WallStreetBets.

Many of those names traded lower on Thursday, with shares of Clover Health Investments Corp down 15.2%, burger chain Wendy’s falling 3.1% and prison operator Geo Group Inc, one of the more recently minted meme stocks, down nearly 20% after surging more than 38% on Wednesday. AMC shares were off more than 13%.

Worries that other companies could leverage recent stock price gains by announcing share sales may be rippling out to the broader meme stock universe, said Jack Ablin, chief investment officer at Cresset Capital.

AMC last week took advantage of a 400% surge in its share price since mid-May to announce a pair of stock offerings.

“It appears that other companies, like GameStop, are hoping to follow AMC’s lead by issuing shares and otherwise profit from the meme stocks run-up,” Ablin said. “Investors are taking a dim view of that strategy.”

Wedbush Securities on Thursday raised its price target on GameStop to $50, from $39. GameStop will likely sell all 5 million new shares but that amount only represents a “modest” dilution of 7%, Wedbush analysts wrote.

GameStop’s shares rallied more than 1,600% in January when a surge of buying forced bearish investors to unwind their bets in a phenomenon known as a short squeeze.

The company on Wednesday said the U.S. Securities and Exchange Commission had requested documents and information related to an investigation into that trading.

In the past two weeks, the so-called “meme stocks” have received $1.27 billion of retail inflows, Vanda Research said on Wednesday, matching their January peak.