Americans’ news consumption habits are deeply polarized. Liberals tend to use a certain set of news sources; conservatives, another set. A recent series of Gallup/Knight Foundation surveys, including interviews with more than 13,500 U.S. adults, finds that polarized news media habits seem to have an independent effect on the way Americans view the news media.

News consumption diet — the top news sources people use — is strongly related to opinions about the news media. Only 3% of Americans with a conservative news diet have a “very favorable” or “favorable” opinion of the media, compared with 56% of those with a liberal news diet and 34% with a mixed news diet. For more information on how Gallup categorizes news diets, see the online appendix (PDF download).

Another important predictor of media favorability and trust in news organizations is the amount of attention people pay to the news. Heavy news consumers — those who pay “a great deal” of attention to local, national or international news — are twice as likely as less engaged news consumers to have a “very favorable” or “favorable” opinion of the media (45% vs. 21%, respectively). Similarly, 54% of heavy news consumers express “a great deal” or “quite a lot” of trust in local news organizations, while 35% of those who pay less attention say the same.

Yet, the effect of heavy news consumption does not increase favorability toward the media or trust in news organizations equally across the various news diets, according to a statistical analysis that accounts for the effects of several demographic and attitudinal characteristics like partisanship and ideology.

The following chart shows the estimated favorability toward the media that a U.S. adult who is moderate and independent would have, based on news diet. As above, such an individual would hold a less favorable opinion of the media if they have a conservative news diet. Importantly, favorability toward the media slightly decreases if this individual has a conservative news diet and is a heavy news consumer rather than a less engaged consumer. In contrast, this same individual will hold a more favorable view toward the media if they consume a mixed or liberal news diet — and this is even more the case if they are a heavy consumer of news. 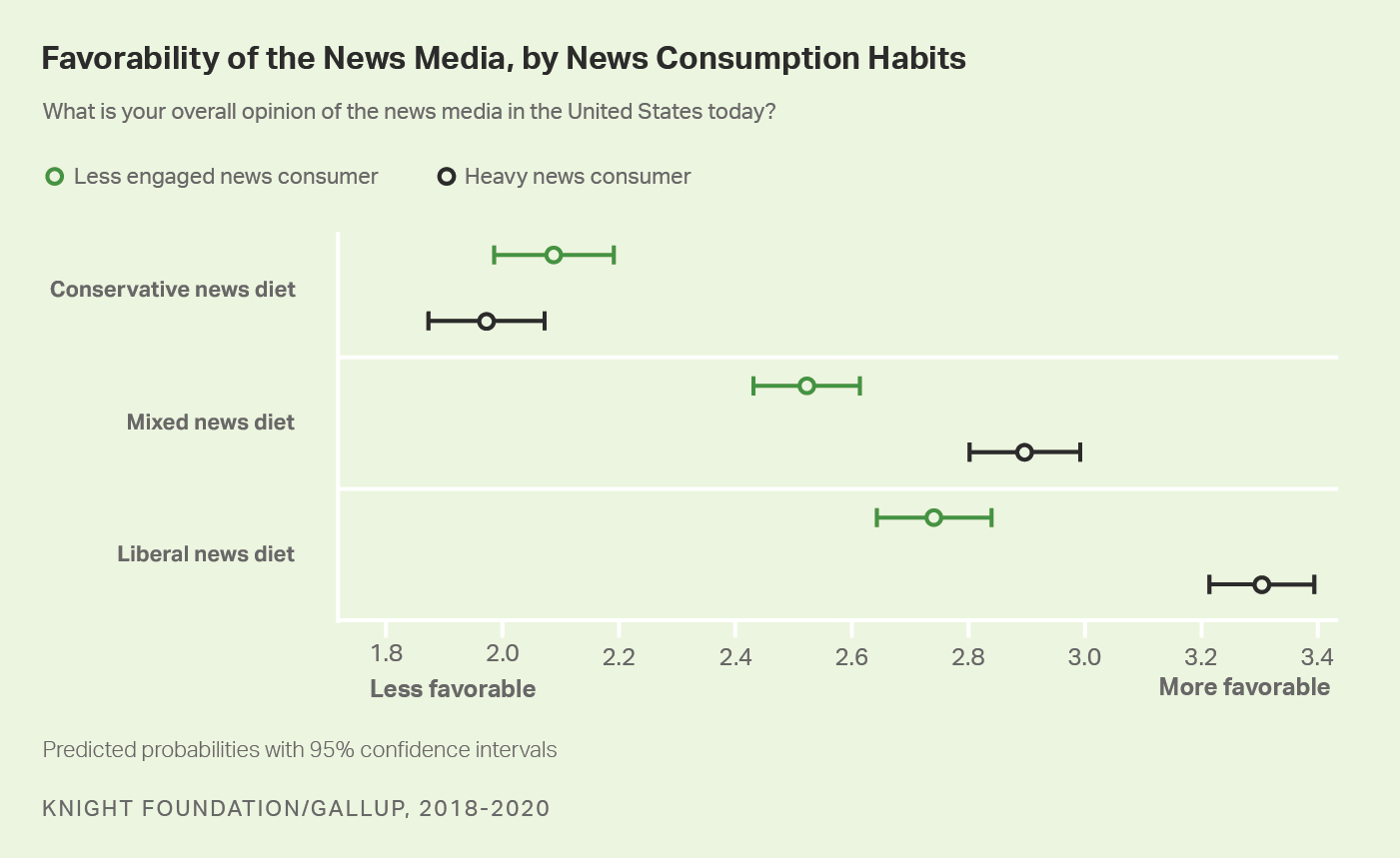 Views of local news organizations reveal a similar pattern. Regardless of how much news this hypothetical moderate independent consumes, their trust in local news organizations will be roughly the same if they consume a conservative news diet. In contrast, this person’s trust will increase if they are a heavy consumer of news with a mixed or liberal news diet, compared with a less engaged news consumer with the same mixed or liberal news diet. 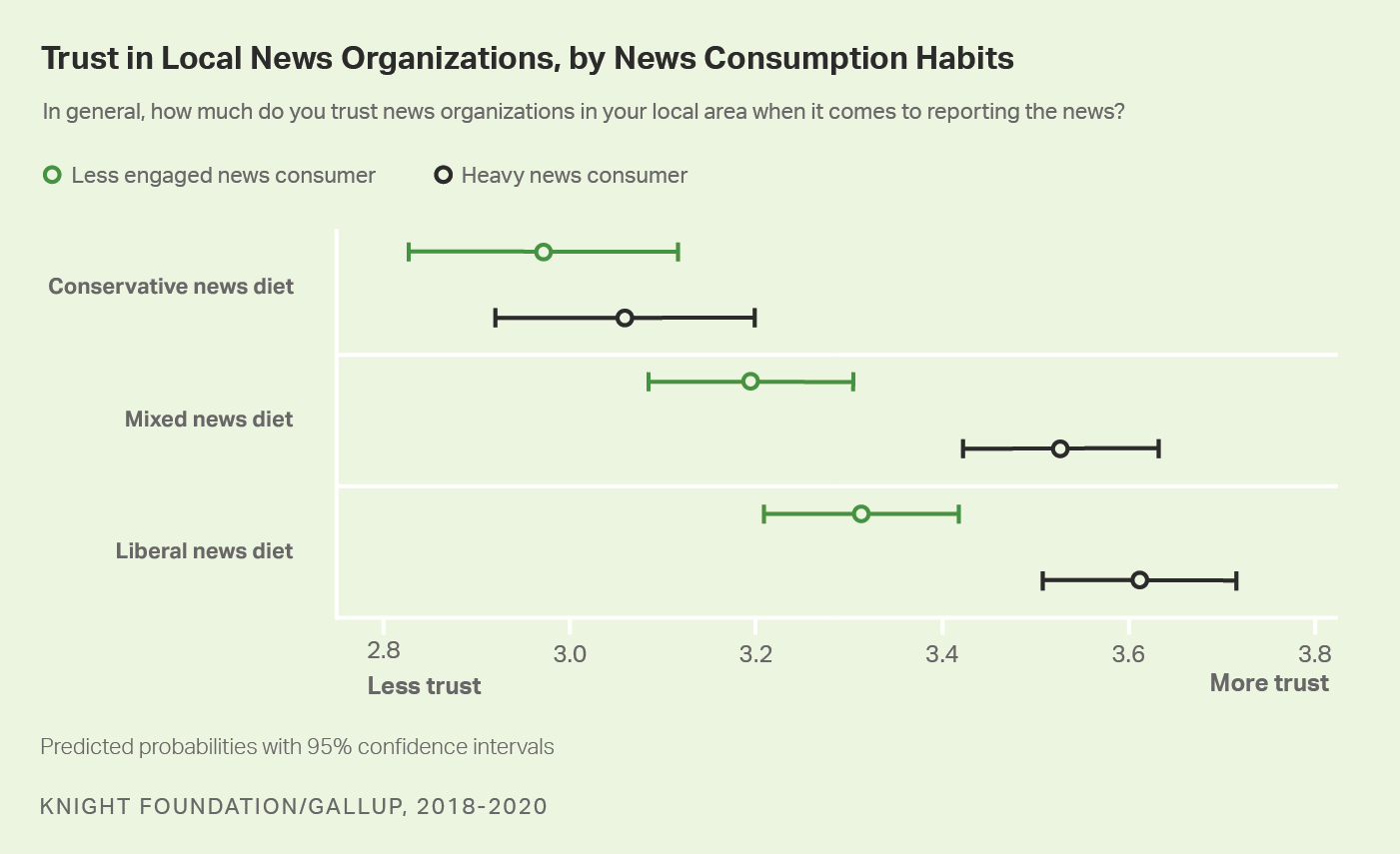 The relationships described above are not causal evidence that a conservative news media diet reduces trust in news organizations. A third factor, which is unknown or not easily measured, could be related to both trust in the media and media consumption habits, and could account for the difference between those two factors.

Alternatively, the causal relationship may go in the other direction. Americans choose to get news from some sources and not others partly because the portrayal of events and topics align with their preexisting attitudes and beliefs. Non-experimental survey data that capture attitudes and self-reported behaviors cannot rule out these alternative explanations.

To explore the causal effect of news consumption habits, Gallup, in partnership with the John S. and James L. Knight Foundation, will launch an online experimental platform called NewsLens. This news aggregator website will capture users’ news consumption habits by tracking what articles they read, like, share and rate. These actions are complemented by surveys on the platform that capture opinions about the media and policy issues. In this way, NewsLens will advance knowledge about how media consumption habits shape attitudes and behaviors.

Polarized news consumption habits lead to a split-screen phenomenon, in which Americans are exposed to different narratives of the same events, based on the information sources they use. These narratives can influence people’s opinions, beliefs and behaviors. Previous studies demonstrate the effect media exposure can have on important matters like voting intention, voter turnout and increased political engagement.

Similarly, consumption of certain news sources is related to trust in news organizations. Democrats tend to occupy an information ecosystem that reinforces their general trust of the news media, while Republicans inhabit one that amplifies their general distrust. These information pipelines create additional barriers to forming a common, fact-based narrative when interpreting important events.

[1] This relationship between news diet and perceived bias of local news organizations remains significant at p<.05 level after controlling for salient covariates like partisanship and ideology.

Brianna Irawan, 13, was extremely happy after finding out on Thursday that her prized underwater camera that had been lost for almost a year had been found in Kelowna’s Mill Creek.

The Williams Lake teen was visiting relatives in Kelowna last year when she lost the camera while jumping into the waterfalls at Mill Creek Regional Park.

“We were on Mill Creek, jumping into the water and I put my camera underneath my clothes,” Irawan told Global News on Friday.

“When I jumped, I forgot about my camera, so I walked back up and then I picked up my clothes and I forgot my camera was underneath and it fell into the water.”

She went back the creek several times over the next few days, but eventually had to write her camera off to the river gods.

The Fujifilm XP model wasn’t seen again until almost a year later when Calvin Van Buskirk found it caught up in some debris downstream.

“What makes it even more interesting is we found a GoPro there last year. You guys [Global News] were able to get the images and the videos off it within hours it found its way back to its rightful owner,” Van Buskirk said.

It took less than 24 hours for images retrieved from the camera to make their way around social media and back to their owner.

Kyla Irawan, Brianna’s mother, sent a message to Global News on Thursday afternoon through Facebook to say the photos had come from her daughter.

2:43
‘This is the craziest thing,’: Lost GoPro owner reunited with camera

‘This is the craziest thing,’: Lost GoPro owner reunited with camera

The Irawans shared a message of gratitude with Van Buskirk.

“Thank you for putting it on Global so I can give my daughter the opportunity to have all those memories back.”

For her part, Brianna said she can’t wait to see her FujiFilm XP model again.

“Soon as I get it, I’m going to transfer the photos” to a computer, she said.

The University of B.C. is distancing itself from former assistant men’s basketball coach Vern Knopp following questions about some of his activity on social media.

A Twitter account called Muted Madness pointed out on Thursday that Knopp had hit the like button on a video posted by conservative comedians the Hodge Twins on June 3 that claims the Black Lives Matter movement is a “leftist lie.”

A number of other Twitter users echoed the criticism of Knopp, who served as head coach Kevin Hanson’s volunteer assistant for the past two decades.

Later on Thursday, he shared a comment on his account, which is set to private: “So I never knew some likes to conservative posts would cause this shit storm? However my LIKES are those of mine and have nothing to do with UBC! I had told Coach Hanson months ago that I wasn’t returning to UBC but I just not (sic) made it public, only to my family.”

Reached via direct message on Friday, Knopp said he’d told Hanson about his decision in May as well as some parents on the team, but declined to make further comment.

Vern Knopp’s personal opinions, beliefs and social media endorsements do not represent the ideals and values of the UBC Thunderbirds. Vern Knopp is no longer a member of the Thunderbirds men’s basketball coaching staff.

“Vern Knopp’s personal opinions, beliefs and social media endorsements do not represent the ideals and values of the UBC Thunderbirds. Vern Knopp is no longer a member of the Thunderbrids men’s basketball coaching staff,” he tweeted.

On Friday, the university’s athletics department declined to comment further.

“The AMS is committed to supporting students from the Black community at this time, and we are actively working to develop programming to help combat anti-Black racism at UBC. The sentiments expressed by Mr. Knopp have absolutely no place at UBC, and society in general,” they said in a statement.

“We are encouraged to see that UBC Athletics and Recreation has taken a zero-tolerance approach to this issue.”

On Tuesday, the department shared a message on Twitter from university president Santa Ono.

“As Thunderbirds we join all of UBC in condemning racism in all forms. We are committed to an inclusive and respectful environment where we listen, learn and continue to grow together,” the department said in a tweet.

As Thunderbirds we join all of UBC in condemning racism in all forms. We are committed to an inclusive and respectful environment where we listen, learn and continue to grow together. https://t.co/mr4elXqLhq

The Saskatoon Police Service has placed a constable on administrative leave regarding concerning posts on their personal social media account.

On Friday morning, police say they were notified about private posts that a member is accused of making on his personal social media account.

Police say the posts were harmful and offensive to the gender and sexually diverse community.

As a result, the member was immediately placed on administrative leave and an investigation was initiated regarding his conduct.

In a release, Chief of Police Troy Cooper said, “The relationship we have with the gender and sexually diverse community is incredibly important to the Saskatoon Police Service. I was to assure the public that we take these complaints seriously. We have acted swiftly to address the issue and a thorough investigation will occur.”

The 12-year member will remain on administrative leave while an investigation takes place.