Buried and frozen in permafrost near the village of Belaya Gora in north-eastern Siberia, the bird was discovered by local fossil ivory hunters, who passed it on to a team of experts, including Nicolas Dussex and Love Dalén from the Swedish Museum of Natural History, for testing.
Radiocarbon dating revealed the bird lived around 46,000 years ago, and genetic analysis identified it as a horned lark (Eremophila alpestris), according to a paper published Friday in the journal Communications Biology.
Dalén told CNN that research showed the bird may be an ancestor to two subspecies of lark alive today, one in northern Russia and the other on the Mongolian steppe.
“This finding implies that the climatic changes that took place at the end of the last Ice Age led to formation of new subspecies,” he said. 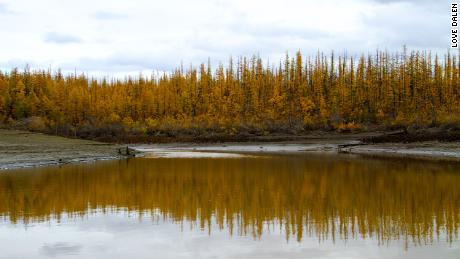 The preservation of the bird is explained in large part by the cold of the permafrost, explained Dussex, but this specimen is in extraordinarily good condition.
“The fact that such a small and fragile specimen was near intact also suggests that dirt/mud must have been deposited gradually, or at least that the ground was relatively stable so that the bird’s carcass was preserved in a state very close to its time of death,” said Dussex.
The next stage of research involves sequencing the bird’s entire genome, said Dalén, which will reveal more about its relationship to present day subspecies and estimate the rate of evolutionary change in larks. 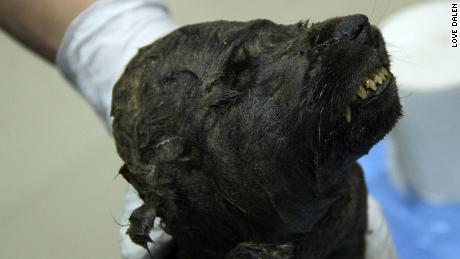 Scientists working in the area have also found carcasses and body parts from other animals such as wolves, mammoths and wooly rhinos.
Dussex described such findings as “priceless” as they allow researchers to retrieve DNA and sometimes RNA, a nucleic acid present in all living cells.
“This in turn will open new opportunities to study the evolution of ice age fauna and understand their responses to climate change over the past 50-10 thousands of years ago,” added Dussex.
The horned lark was discovered at the same site as an 18,000-year-old frozen puppy, which Dalén and Dussex are also studying.
Using carbon dating on the creature’s rib bone, experts were able to confirm that the specimen had been frozen for around 18,000 years, but extensive DNA tests have so far been unable to show whether the animal was a dog or a wolf.
Scientists can normally tell the difference relatively easy, and researchers hope that further tests on the remains will provide more insight into exactly when dogs were domesticated.

A photograph of a cube-like object captured by a Chinese rover on the far side of the moon has fanned speculation over what it could be.

The Yutu-2 caught an image of what seems like a large cubic object on the horizon about 80 metres from its location, said Our Space, a Chinese government science website, citing the rover’s last log on Dec. 3.

The solar-powered Yutu, or “Jade Rabbit” in Chinese, will cover the distance of 80 metres in two to three lunar days, according to Our Space, or two to three Earth months. The robotic rover has been operating in the Von Karman Crater in the South Pole-Aitken Basin since its deployment in January 2019.

The mission was a historic first, with no other nation having landed on the far side of the moon until then. With the moon tidally locked to Earth — rotating at the same speed as it orbits our planet — most of its “dark side” is never visible to those on Earth.

There is a new comet in town, and December is your only chance to see it before disappears forever. Astronomers say that Comet Leonard is our best and brightest comet to see in 2021.

The comet was first discovered in January by astronomer Greg Leonard. The celestial object has likely spent the last 35,000 years traveling toward the sun, according to Sky & Telescope, and once it makes a close pass of our star on January 3, we won’t be seeing the comet again.

As the comet nears the sun, it brightens, which is why the weeks leading up to this event make the comet easier to see.

It’s also an ultrafast comet, blazing through the inner solar system at 158,084 miles per hour (71 kilometres per second), but it will still appear like a slow-moving object due to its distance from Earth, according to EarthSky.

Comet Leonard will make it closest approach to Earth on December 12, coming within 21 million miles (34 million kilometres) of our planet. Then, it will sweep by Venus on December 18.

The comet will be visible in the skies of both the Northern and Southern hemispheres this month.

It’s difficult to predict how well we may be able to see a comet, but you”ll probably need binoculars to spot this one, according to NASA. Keep an eye out for an object that looks like a fuzzy star.

“In the first couple of weeks of December, Comet Leonard can be found in the east before sunrise, passing between Arcturus and the handle of the Big Dipper,” the agency shared in a post.

“It approaches the horizon right around the time of its closest approach to Earth, meaning it’ll likely be brighter but more challenging to observe. It then switches over to being an evening object after around Dec. 14th, for just a little while after the Sun sets — as it begins its long haul outward from the Sun again, progressively fading in brightness.”

As comets near the sun, these giant iceballs begin to shed some of their material, which forms a halo, or coma, around the object.

Dust and gas stream behind comets to form their extremely long tails. Most comets originate from the icy edge of our solar system and only become visible to us as they travel through the inner solar system, where Earth is located, during their long orbits of the sun.

It’s possible that Comet Leonard will be visible to skywatchers looking with the naked eye, but if you’re worried about missing this once-in-a-lifetime viewing experience, The Virtual Telescope Project will be sharing a livestream from its observatory in Rome.

Hubble Space Telescope has often captured stunning images of mysterious events in space. It has allowed astronomers to widen their research and uncover new details. Recently, the telescope was trying to understand how young stars influenced their environment and it witnessed a shock wave of colliding luminous gases in the ‘Running Man’ Nebula. The image of the Herbig-Haro object, known as HH 45, showed clouds of gas and dust glow. Herbig-Haro is a type of nebula that forms when gas from a newborn star collides with dust around it at huge speeds and produces shock waves.

Herbig-Haro objects are rarely seen. This object is located in the nebula NGC 1977, also called the Running Man Nebula, which is a complex structure of three nebulae in the Great Orion Nebula, about  5,000 light-years from the Earth.

The Running Man Nebula is a reflection nebula, meaning it does not emit light on its own but reflects light from nearby stars “like a streetlight illuminating fog,” according to NASA. Hubble was looking at this region for “stellar jets and planet-forming disks around young stars.” It was trying to examine how their environment affects the evolution of such disks.

The Hubble image showed two sets of ionised gases glowing in blue and purple colours. While blue indicated ionised oxygen, purple represented ionised magnesium. “Researchers were particularly interested in these elements because they could be used to identify shocks and ionisation fronts,” the NASA statement read.

This image was not a bad capture for an observatory that was waking up after a technical problem and went into “safe mode” in October. Hubble, a joint project by NASA and ESA, was last serviced in person in 2009 and has not been visited by astronauts since 2011.

NASA is set to launch the more powerful James Webb telescope in December as a “successor” to the Hubble Space Telescope. Citing the differences between the both, NASA has stated that their capabilities weren’t identical. One of the differences NASA pointed out was that while James Webb telescope will study the universe largely in infrared, Hubble had been focusing on optical and ultraviolet wavelengths.