P.K. Subban will host a trivia-based game show that will feature fans, celebrities and NHL players during the NHL pause.

The New Jersey Devils defenseman made the announcement during a video call of players from the Metropolitan Division on Thursday.

“I’m sure it could be some fun stuff and it’s also great to create some content that brings some joy to people, gives people some things to laugh about because there’s a lot of things to frown about [right now],” Subban said. “I’m happy that the League is making an initiative to put smiles on people’s faces and give fans some content to look forward to and have some fun with. Hopefully this game show can do that and I’m looking forward to it.”

The NHL is hoping to begin the show in the next two weeks.

“You’re always trying to find ways to be constructive and keep yourself busy, and I don’t have kids, so I might have extra time that you don’t have to do other things,” Subban said.

Subban asked Washington Capitals forward Alex Ovechkin, who was on the video call, if he planned on tuning in to watch the game show.

Ovechkin said, “Yes, why not. Anything for you, bud.”

Subban does have experience hosting a show with “P.K. Subban‘s All-Star Special” during the NHL All-Star break in 2019.

Subban spent a week and a half in New Jersey after the NHL announced the pause on March 12 due to concerns surrounding the coronavirus. He returned to his offseason home in Los Angeles to be with fiancée Lindsey Vonn and continue his workouts because he didn’t have much gym equipment in New Jersey.

“I went from one hotbed [in New Jersey] to another [in California], and it’s just crazy to see,” Subban said. “I do a lot of work in hospitals and stuff too, and it doesn’t really hit you until you think about all the people that don’t have what we have, don’t have the support system that we built for ourselves and do our jobs and the resources that we have. It’s just kind of crazy to be in the hotbed of things and see how people have handled it.

“You’ve got to give crazy props to the doctors and nurses and all the people that have put in crazy hours, that have those masks on, that are doing work all day. … I couldn’t imagine having one of those on for a 14-, 15-, 16-hour shift. Shout out to all those people that are putting in the time and continuing to make us healthy and safe. It’s just tough. It’s just a tough time. It’s crazy.”

Subban said the best show he’s watched since the pause has been the Netflix docuseries, “Tiger King: Murder, Mayhem and Madness.”

He also offered some words of advice before signing off.

“I think everybody, to a certain degree, still has their freedom to do what they like to do, but there’s obviously a bigger cause with quarantining, washing your hands and making sure you try to be as disciplined as you can because it’s going to help save lives,” he said. “The quicker we can continue to be disciplined, maybe the quicker this turns around.

“There are a lot of people going through difficult things, and for the people lucky enough to have a house over their head, clothes, food and water, just do what you can to help within the guidelines.”

In anticipation of an abbreviated 2020 season, one of many proposals MLB is reportedly considering is a major realignment that would eliminate the traditional American and National Leagues, according to USA Today’s Bob Nightengale.

“The plan would have all 30 teams returning to their spring training sites in Florida and Arizona,” Nightengale writes, “playing regular-season games only in those two states and without fans in an effort to reduce travel and minimize risks in the midst of the COVID-19 pandemic. The divisions would be realigned based on the geography of their spring training homes.”

The clubs would first be allowed three weeks of training, adds Nightengale, including exhibition games, before opening a regular season in divisions that could look like so:

The most significant change for the Blue Jays would be to a move out of the AL East, along with the Yankees, to play against their Grapefruit league opponents, which could mean an easier path to the playoffs for Toronto.

Nightengale elaborated on how the post-season format could potentially look under such a format.

“Baseball, even with the realignment, could still play 12 games apiece against their new divisional opponents and six games apiece against the other teams in the state. … The DH would likely be universally implemented as well. There could still be division winners and wild-card winners, perhaps adding two more wild-card teams to each league, or a postseason tournament with all 30 teams,” he wrote.

No official decision has yet been made on when the league will return, or what exactly that return will look like. 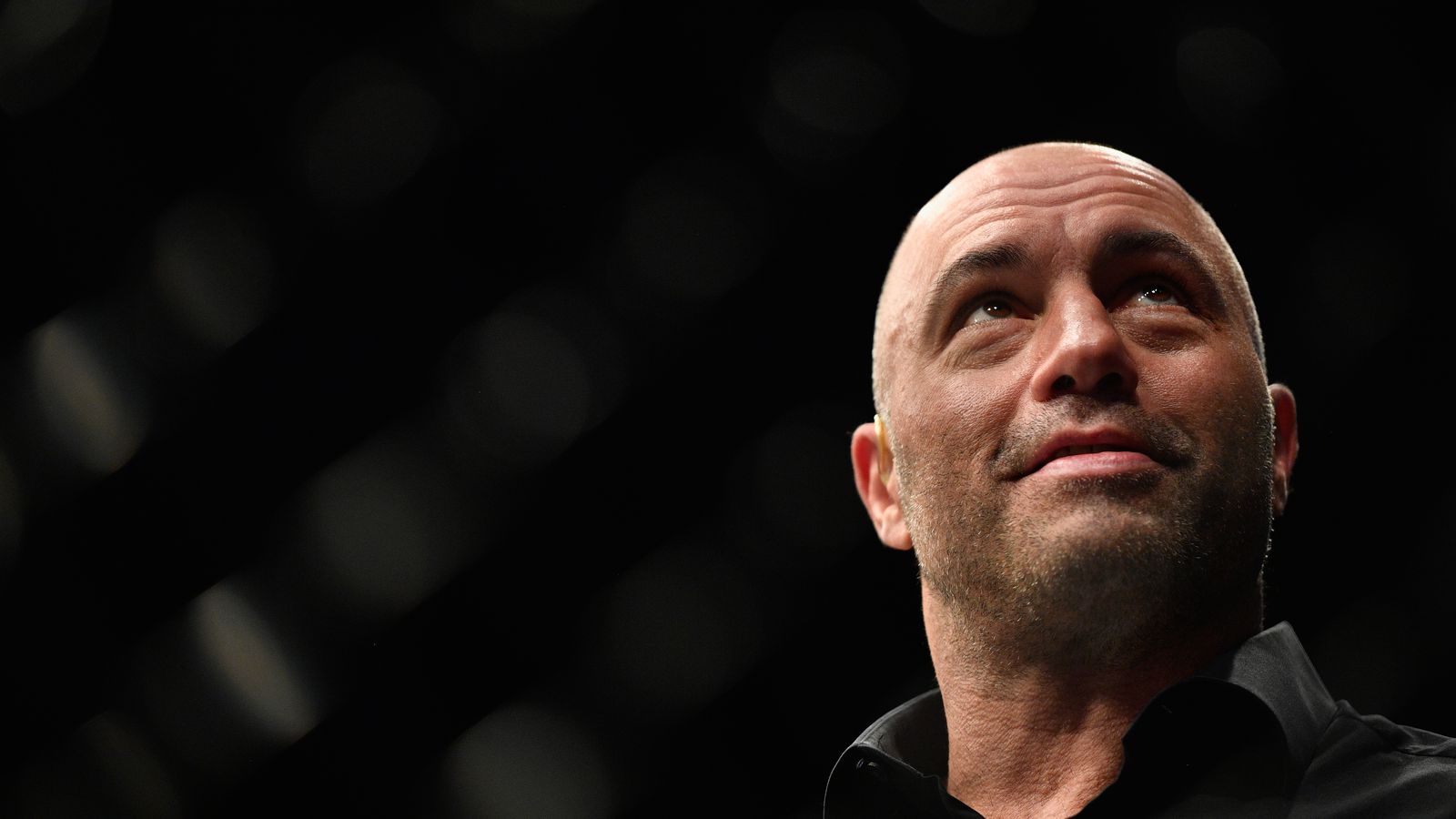 Ultimate Fighting Championship (UFC) President Dana White was not going to let a silly little thing like a global pandemic stop him from staging mixed martial arts (MMA) events, even if it meant taking his promotion to west coast tribal grounds or remote tropical islands to bypass local and federal quarantines.

That depends on who you ask. For longtime color commentator Joe Rogan, still on the fence about attending when word came in that UFC 249 was canceled, White is a “real man” who deserves praise for his dogged persistence in trying to make the “Ferguson vs. Gaethje” pay-per-view (PPV) event a reality.

“He’s a psychotic driving force for the most exciting organization in the world and I don’t think the organization gets where it is without Dana White,” Rogan said on his official podcast. “I think you have to have a crazy person at the wheel. You have a guy who doesn’t give a fuck. He’s a real man. He doesn’t give a fuck, he’ll talk shit, he’ll insult people, he’ll go back with you.”

White helped convince casino magnates Frank and Lorenzo Fertitta to purchase UFC back in 2001 for a paltry $2 million — which they later sold for $4 billion — and no question his drive and longterm vision helped shape the future of combat sports. The promotion would be nothing without the fighters, obviously, and White had a couple of big breaks along the way, but his contributions to MMA cannot be overstated.

White is also on the hook for the $750 million check from ESPN and parent company Disney, which requires 42 live events in 2020 to cash. Expect a very busy fight schedule once the promotion gets up and running later this year, though we’re at the mercy of coronavirus as far as that timeline is concerned.

ESPN has issued a brief statement after it was confirmed that they played an important role in shutting down the controversial UFC 249 event.

It was confirmed last night that UFC 249 will not be going ahead on April 18 as we previously thought. UFC president Dana White did just about everything in his power to get the job done, but in the end, the higher ups at Disney and ESPN put a stop to proceedings.

In a statement obtained by MMA Junkie, ESPN had the following to say on the matter.

“ESPN has been in constant contact with the UFC regarding UFC 249,” the statement read. “Nobody wants to see sports return more than we do, but we didn’t feel this was the right time for a variety of reasons. ESPN expressed its concerns to the UFC, and they understood.”

It goes to show that while White and the UFC may not make any adjustments when it’s just the MMA media making noise, once things go up a tier, there’s not all too much they can do.

With White still pushing ahead with his UFC Fight Island idea, it’ll be interesting to see whether or not ESPN also attempts to put a stop to that, too. These are unprecedented times as we’ve all been saying for weeks now, but one constant seems to be Dana White’s complete and utter determination to push on in the face of adversity.

He’s always spoken about the love he has for the UFC’s partnership with ESPN since it first began, and while it’s probably been tested in the last 24 hours, this was the right decision in the interest of public health.

Now, we just have to wait and see how much longer it’s going to be before UFC fans are able to sit back and enjoy live fights once again.

'Different than anything we've seen': ICU doctors question use of ventilators on some COVID-19 patients – Simcoe Reformer