The news came on the eve of several provinces easing restrictions, putting a damper on the cautious optimism brought on by a recent decline in new cases and hospitalizations.

Quebec became the first Canadian province to hit a five-figure death toll as it reported 32 new fatalities for a total of 10,031.

The number comes exactly one week after Canada reported its 20,000th death linked to the pandemic, and a day after the national COVID-19 case count surpassed 800,000.

While the number of deaths has continued to climb, Canada’s chief public health officer has said daily cases and severe outcomes are continuing to decline — leading some provinces to ease public health restrictions starting Monday.

That positive news was tempered somewhat on Sunday as Toronto Public Health reported it had discovered two more cases involving COVID-19 variants — including its first case of a strain first identified in Brazil.

The agency said the variant was discovered in a person in hospital who had recently returned from that country.

Authorities also discovered a case involving the South African variant in a person who had not travelled to the country, or had contact with anyone who had.

“Scientists and medical professionals are concerned that these variants are more transmissible than the original coronavirus.” Toronto Public Health said in a statement.

“The U.S. Centers for Disease Control and Prevention (CDC) has indicated that research is ongoing to determine more about these variants to better understand how easily they might be transmitted and the effectiveness of currently authorized vaccines against them.”

The news came as several provinces prepare to ease restrictions on Monday amid an overall improvement in the number of new cases and hospitalizations.

Quebec will allow non-essential stores, personal care salons and museums to reopen across the province on Monday, following a steady drop in COVID-19 infections and hospitalizations.

Six of the provinces less-populated regions will move to the lower orange-alert level, allowing them to eat inside restaurants, work out at gyms and stay out until 9:30 p.m., instead of 8 p.m. like the rest of the province.

Premier Doug Ford is also expected to announce more details of a plan to re-open businesses, according to a senior government source.

Alberta will allow the resumption of some school and team sports for children and teens to resume on Monday.

Even as some restrictions are set to ease, Canada’s chief public health officer urged Canadians to keep avoiding gatherings, including for Sunday’s NFL Super Bowl.

Dr. Theresa Tam urged Canadians to hold virtual parties to mark the event, and to restrict in-person gatherings to people they live with.

That message was echoed by Nova Scotia Premier Stephen McNeil, who cautioned people to keep game-watching gatherings small, even as the province reported just one new case of COVID-19.

This report by The Canadian Press was first published Feb. 7, 2021

B.C.’s health minister is pleading with British Columbians not to ring up COVID-19 vaccine call centres unless they’re eligible to book an appointment for a shot.

“If you’re not in those categories, please don’t call us today so that we can continue to proceed through those appointments. We’ve got five days to do it, there’s going to be lots of time,” Dix said during a media briefing.

“Remember, this is not first come first serve, that there’s going to be appointments available all week.”

Initial bookings are to be done through dedicated call centres for the province’s five local authorities and family members are able to book on behalf of seniors who may not feel comfortable scheduling their vaccinations on their own.

Fraser Health is the only health authority providing online bookings.

Vaccinations for elderly British Columbians begin March 29 as the province continues to prioritize vulnerable groups and frontline health-care workers for vaccinations over the next three weeks.

Dix said an online booking platform will be ready to launch April 12 as the province begins vaccinating the broader population with more doses expected to be pouring in from manufacturers.

Details on the province’s online platform remain sparse and provincial officials said one week ago more information would be made available in the coming weeks.

Call centre workers will not be asking for financial info, such as credit card details.

The city of Toronto has launched a website for booking and registering for COVID-19 vaccinations ahead of the province’s upcoming centralized online system.

Only eligible individuals are allowed to register at the moment. The website outlines that the availability of vaccination appointments depends on vaccine supply.

Provincial prioritization guidance states that people who are 80 years of age or older, health care workers in high priority risk groups and Indigenous adults are eligible for vaccinations right now.

The municipal government says the website is being used until the provincial government launches a centralized online registration website, which is currently in the works and set to roll out on March 15th.

Last month, the Ontario government provided a proposed timeline for when residents can start accessing the online booking system once it launches. Those who are age 75 and above can access the system starting April 15th, residents aged 70 and above can start May 1st and those who are 65 and older can begin June 1st.

The proposed schedule will be in place as long as the supply of vaccines remains steady. It’s also worth noting that although the booking system is expected to open for eligible people during these windows, it will likely take some time to get an appointment reserved.

Ontario is behind other provinces in launching the online booking system, as residents in Alberta and Quebec are already able to start booking appointments online. 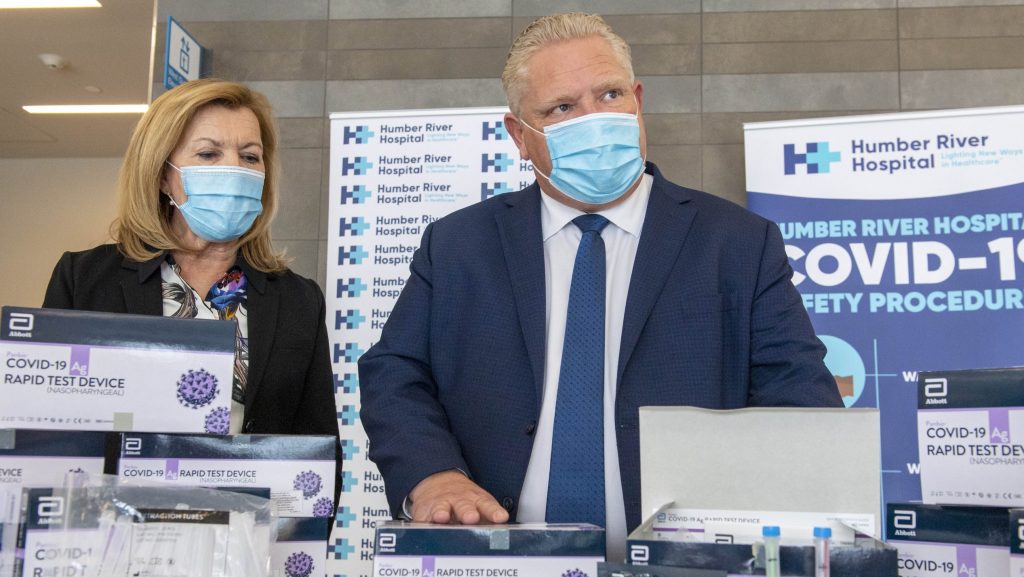 Ontario’s health minister says people won’t be asked to provide proof of their pre-existing health conditions to access a COVID-19 vaccine during the second phase of the rollout.

Christine Elliott says she believes most people will come to the clinics when they are permitted and not take advantage of the honour system.

The vaccine will be offered starting in April to people with specific health conditions like organ transplant recipients, those living with obesity, and those receiving treatments that suppress the immune system.

Elliott says local public health units will screen people as they arrive at the clinics and may be able to check with a person’s family physician, but that will not be mandatory.

“We haven’t run into very many of those situations,” she said. “People are following the rules, they are coming in at the appropriate time, they’re being very patient, and they want to make sure that people who are the most at risk are going to be given their vaccinations first.”

Vaccinations among the highest-priority Ontarians, including long-term care residents and staff, are wrapping up, and some local public health units have already begun offering shots to the broader public, starting in many cases with those over age 80.

First vaccine doses were completed as of Monday in 31 fly-in Indigenous communities, in what the province called a “milestone” in its effort to provide protection against the virus in remote areas. Ontario aims to complete second doses in those communities by the end of April.

Meanwhile, Ontario has reported 1,631 new cases of COVID-19 today, but the government says the case count is higher than expected due to a “data catch-up process” in its system.

The province also recorded 10 additional deaths linked to the virus.

Health Minister Christine Elliott said 568 of the new cases are in Toronto, 322 are in Peel Region, and 119 are in York Region.

The three regions were the last ones still under the order, and are transitioning back to the government’s colour-coded pandemic response framework.

Toronto and Peel entered the strictest “grey lockdown” category, something local public health officials asked for in both regions.

Even those strict measures, however, allow more retailers to open, with restrictions, but leave gyms and personal care services closed. Restaurants, meanwhile, can only offer takeout, drive-thru, or delivery.

Some restaurant owners said they won’t be able to survive much longer unless they’re allowed to reopen for on-site dining, even at a limited capacity.

“Move us to the red zone (of the pandemic system) so we have a fighting chance. Even 14 days in grey lockdown could mean the end of my business and many others,” Regan Irvine, owner of the Irv Gastropub in Toronto, said in an open letter to officials issued last week.

“Over the last year, my mother and I have depleted our life savings to try and keep the restaurant afloat. We have cashed RRSPs, drained savings accounts, maxed out credit cards, and maxed out lines of credit because the government assistance programs simply aren’t enough.”

North Bay is now in the “Red Zone,” the second most restrictive level of pandemic measures.

Elliott said the government is taking a “safe and cautious approach” to ending the provincewide shutdown, which started in January.

Spotlighting women in media across the CFL – CFL.ca

Gushue Falls to 2-1: Smith Makes Shot of the Tournament – VOCM