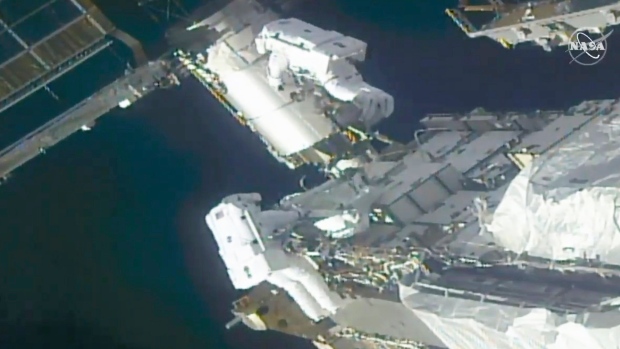 NASA’s Kate Rubins and Victor Glover put the mounting brackets and struts together, then bolted them into place next to the station’s oldest and most degraded solar wings.

They had to lug out the hundreds of pounds of mounting brackets and struts in 8-foot (2.5-meter) duffle-style bags. The equipment was so big and awkward that it had to be taken apart like furniture, just to get through the hatch.

Some of the attachment locations required extra turns of the power drill and still weren’t snug enough, as indicated by black lines. The astronauts had to use a ratchet wrench to deal with the more stubborn bolts, which slowed them down. At one point, they were almost an hour behind.

“Whoever painted this black line painted outside the lines a little bit,” Glover said at one particularly troublesome spot.

“We’ll work on our kindergarten skills over here,” Mission Control replied, urging him to move on.

With more people and experiments flying on the space station, more power will be needed to keep everything running, according to NASA. The six new solar panels — to be delivered in pairs by SpaceX over the coming year or so — should boost the station’s electrical capability by as much as 30%.

Rubins and Glover worked on the struts for the first two solar panels, due to launch in June.

The eight solar panels up there now are 12 to 20 years old — most of them past their design lifetime and deteriorating. Each panel is 112 feet (34 metres) long by 39 feet (12 metres) wide. Tip to tip counting the centre framework, each pair stretches 240 feet (73 metres), longer than a Boeing 777’s wingspan.

Boeing is supplying the new roll-up panels, about half the size of the old ones but just as powerful thanks to the latest solar cell technology. They’ll be placed at an angle above the old ones, which will continue to operate.

A prototype was tested at the space station in 2017.

Sunday’s spacewalk was the third for infectious disease specialist Rubins and Navy pilot Glover — both of whom could end up flying to the moon.

They’re among 18 astronauts newly assigned to NASA’s Artemis moon-landing program. The next moonwalkers will come from this group.

“The history making that you are doing, we are so proud of you,” Harris said. Like other firsts, Glover replied, it won’t be the last. “We want to make sure that we can continue to do new things,” he said.

Rubins will float back out Friday with Japanese astronaut Soichi Noguchi to wrap up the solar panel prep work, and to vent and relocate ammonia coolant hoses.

Glover and Noguchi were among four astronauts arriving via SpaceX in November. Rubins launched from Kazakhstan in October alongside two Russians. They’re all scheduled to return to Earth this spring.

Western University researchers have tapped the help of hundreds of amateur and professional astronomers in an effort to make sure no meteor is unable to slip by the Earth undetected.

To do that, they’re relying on the observations taken from 450 cameras in 30 different countries manned by “enthusiastic amateur astronomers” made up of professional and citizen scientists.

That data is then sent to Western University as part of what’s called the Global Meteor Network (GMN), headed by Denis Vida.

“So we have a lot of enthusiastic amateur astronomers, citizen scientists and also professionals that build, operate and maintain these cameras,” Vida told CBC’s Chris dela Torre during Afternoon Drive. “And every night they inspect the data set and send their data to a central server here at the University of Western Ontario.”

It’s not just about observing meteors – it’s about tracking what’s left of the ones that make it to the earth’s surface too.

“So we also observe a meteorite dropping fireballs,” said Vida. “They’re quite rare over an area of let’s say the country the size of France or Spain. Could only expect two to three of those fireballs a year that drop more than, let’s say, 300 grams of meteorites on the ground.”

“So because these events are very rare, it is important to observe 24/7.”

Vida explained that when one of their cameras spot one of them, they collect the data and find its location so they can retrieve what’s left for analysis – and analysis needs to happen quickly.

“There are certain things in them, like some radionuclide to decay very quickly, but those can tell us how old the meteorite is, how long it was after it was ejected from the parent asteroid that it fell on the ground,” he said.

Vida explained that what ends up on the ground are just “several kilograms of materials” by the time they reach the earth’s surface. They aren’t hot either. They cool down on their descent.

The goal of the project, led by Denis Vida, a postdoctoral associate at Western, is to ensure unique or rare space events are not missed.

Vida explained in a statement, “Other astronomers can pool their resources to build a big telescope on top of a mountain where the skies are dark and clear year-round, but meteor astronomers need spatial coverage most of all.”

Meteors can occur anywhere in the world, happen close to earth and often burn up at around 100 km above the surface — so they can only be well observed from within about 300 km and need to be seen by cameras in at least two places to get the exact location.

That’s where the Global Meteor Network comes in.

In March, the network helped locate a rare portion of a meteorite that landed in Winchcombe, England on Feb. 28 and figure out where in space it originated.

“Its role in the recovery and analysis of the Winchcombe meteorite fall is proof positive that GMN works,” said Vida.

The first system to observe meteorites was installed at Western in 2017, and it continues to grow as the cost of meteor cameras has declined.

GMN also publishes the orbits of all observed meteors around the world within 24 hours of observation. The location of cameras and meteor data can be seen here.

The network also hopes to better understand flight patterns and flux capacities of meteorites, and even predict future events.

BRAMPTON, Ont. — The Canadian Space Agency has awarded a contract worth $35.3 million to MDA Ltd. to design a key component of Canadarm 3.

Companies in this story: (TSX:MDA)