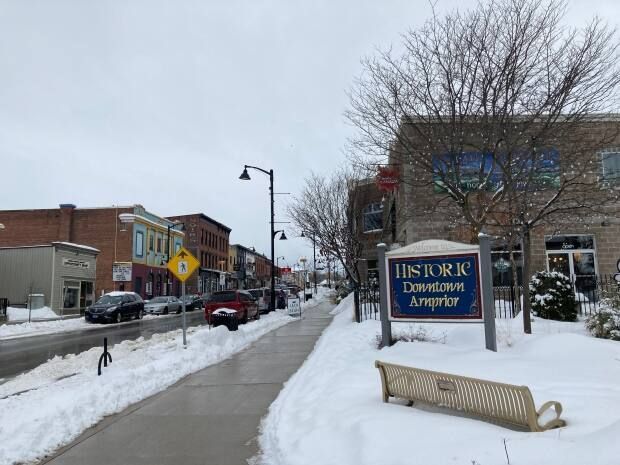 The head of the Renfrew County and District Health Unit says he may implement tighter pandemic restrictions in parts of the region following a sudden rise in cases in communities just outside Ottawa.

The health unit has confirmed 15 positive COVID-19 cases over the past week, mostly in the town of Arnprior, Ont., and the nearby township of McNab/Braeside, Ont., according to Dr. Robert Cushman, acting medical officer of health for the region.

Cushman said the people attended the same social gathering and then spread the virus by visiting several different households and businesses.

“It appears to be just some, you know, ‘Let’s party. Let’s have fun,'” Cushman said Saturday.

According to the health unit, those who were infected then worked at or visited seven local businesses while contagious. The health unit closed one business, Cushman said, while several other businesses chose to temporarily shut down on their own.

“What you’re seeing here, I think, is just sort of wanton disrespect and neglect,” Cushman said.

McNab/Braeside Mayor Tom Peckett reiterated that just because the region is green doesn’t mean people can ignore the rules.

“Even if our area is in a green zone, the rules of keeping apart and not having large gatherings is still in effect,” he said.

Peckett said he was disappointed since most people are following the rules and the actions of a few could impact everyone else in the community.

“That makes me a little bit angry, that they’re not thinking about anyone else but themselves,” he said.

In a statement, Ontario’s Ministry of Health said it was in close contact with medical officers of health across the province in order to swiftly react to shifts in the pandemic.

While it’s the province’s decision to move the region into the more-restrictive yellow zone — a decision also based on more than a sudden spike in cases — medical officers of health have the power to impose Section 22 orders to target specific areas of transmission, the ministry noted.

“We may be pushed to take more restrictive measures in a given town … rather than apply them across the board to Renfrew County,” he said.

The outbreak comes a week after Cushman released a video message warning residents the county was seeing an increase in the number of contacts per infected person.

He said he was speaking out harshly now because he doesn’t want rising case numbers to become a trend.

“People have all got COVID fatigue. And one thing that will give them more COVID fatigue is to close down the economy further,” he said. “So we don’t want to do that.”

What are your thoughts about the recently announced Pokémon games? – MobileSyrup


Not siding with Nvidia on Arm

Graphics chipmaker Nvidia’s planned $40 billion acquisition of British chip design firm Arm has been a touchy subject around the tech industry lately. In April, regulators in the UK spoke up against the acquisition on national security grounds.

Apple uses Arm designs to for its iPhone and Mac chips, and it doesn’t have the most friendly history with Nvidia, so it’s no surprise the company may not be wholly supportive of the idea.

“I think that that acquisition has lots of questions that people are asking and I’ll sort of leave that up to everyone else,” Cook said.

Despite the iPhone’s success, he believes “we’re in the very early innings of 5G.” He noted that most places around the world don’t have it broadly available, despite being “nine months or so into” the iPhone 12’s launch.

“We feel really great about the momentum, but at the same time we recognize that the 5G penetration is quite low around the world,” he added. “We’re at the front end of this.”

A popular trope about Apple is that its fans are rabid and willing to spend endlessly on the company. To counteract that perception, Apple’s highlighted how many new people are coming to its products. Worldwide, for example, the company said that even though the Apple Watch was first released six years ago, 75% of the people who bought one in the three months ended in June were new to buying one.

Apple didn’t offer similar data about its phones, but Cook said it was strong. “We had strong double-digit growth for switchers, and for upgraders, and in fact it was our largest upgrade quarter for Q3 ever,” he said.

Apple warned in the past that Mac and iPad supply were dictated by how many chips the company could get hold of, setting up the possibility sales could underwhelm in the future. Instead, Apple CFO Luca Maestri said the company’s been able to set records despite those troubles. “It is remarkable that the last four quarters for Mac have been its best four quarters ever,” he said. “This exceptional level of sales success has been driven by the very enthusiastic customer response to our new Macs powered by the M1 chip, which we most recently brought to our newly redesigned iMac.”

Despite “significant” supply constraints during the quarter, he added, “we also started shipping our new iPad Pro powered by the M1 chip and customer response has been outstanding.”

He said supply constraints will be “higher” during the September quarter.

Apple CEO Cook said he’s “paying more for freight than we’d like to pay” but component costs continue, as an aggregate, to decline.

“In terms of supply constraints and how long they will last,” he said. “I don’t want to predict that today. We’re going to take it sort of one quarter at a time and, as you would guess, we’ll do everything we can to mitigate whatever set of circumstances we’re dealt.”

Apple’s CEO kicked off the company’s conference call talking about how much people have turned to his company’s products. But he also noted that despite a positive spring and summer, things may be getting tougher again.

“As the last 18 months had demonstrated many times before, progress made is not progress guaranteed. And uneven recovery to the pandemic and the delta variant surging in many countries around the world have shown us once again that the road to recovery will be a winding one,” he said. “As we look forward to more in-person interactions in the future, we’re doubling down on innovation and doing all we can to help chart a course to a healthier and more equitable world.”

While Apple’s business appears to be humming, the rest of the world is decidedly less steady. The US Centers for Disease Control and Prevention earlier Tuesday recommended that vaccinated Americans wear masks indoors again where transmission is “substantial or high,” for fear the coronavirus could spread even further among children who can’t yet receive a vaccine and the people who’ve opted against receiving one so far.

Even Apple has already told employees it’s delaying return-to-office plans until October at the earliest, mirroring moves from 2020 when companies began shifting schedules in response to worsening conditions.

Analysts and industry watchers will be watching for any signs from Apple about the future.

Why you need to urgently update all your iPhones, iPads, and Macs – NOW! – ZDNet

If you’ve not yet updated your iPhones, iPads, and Macs with the latest patches from Apple, then you need to take some time out of your day to do it right now, because this is a big one.

Earlier this week, Apple published iOS 14.7.1, iPadOS 14.7.1, and macOS Big Sur 11.5.1. While this update contains bug fixes, the main part of this update is a security fix for a vulnerability that Apple says is “may have been actively exploited.”

In other words, the bad guys are already using it.

Here’s how Apple describes the vulnerability in relation to iOS and iPadOS:

Impact: An application may be able to execute arbitrary code with kernel privileges. Apple is aware of a report that this issue may have been actively exploited.

It’s unclear is this is the vulnerability used for jailbreaking iOS devices, or whether it is linked to the NSO Group spyware tool hack used to target journalists, activists, and government figures.

To update your iPhone and iPad, go to Settings > General > Software Update and download and install any available updates.

For macOS, click on the apple in the top-left corner, go to System Preferences, find Software Update and download and install any updates available.

I recommend carrying out these updates as soon as possible.

To get immediate notifications of updates for the iPhone and iPad, I’ve been using the app iVerify.

Apple said Tuesday its profit in the just-ended quarter nearly doubled amid improving consumer spending and a “growing sense of optimism” as pandemic lockdowns eased.

The California tech giant’s profit rose to $21.7 billion on growth in iPhone sales and its increasingly important digital services.

Revenue surged 36 percent from a year ago to $81.4 billion, the best ever for the tech titan’s fiscal third quarter.

“This quarter saw a growing sense of optimism for consumers in the United States and around the world, driving renewed hope for a better future,” chief executive Tim Cook told a conference call.

“We are especially humbled that our technology has continued to play a key role in keeping our customers connected.”

Cook said an easing of pandemic lockdowns helped boost consumer spending in many parts of the world, with Apple benefitting from that.

He maintained that Apple can continue to grow as consumers seek new devices for superfast 5G wireless networks.

“We’re only in the early innings of 5G, but already its incredible performance and speed have made a significant impact on how people can get the most out of our technology,” he said.

Apple shares were little changed in after-market trading following the results, which were stronger than most forecasts.

Revenue from iPhone sales jumped some 50 percent and posted increases for its services such as digital payments, music, streaming television and gaming.

The results come with Apple and other tech giants facing heightened pressure from antitrust enforcers around the world for their dominance of key economic sectors, which has increased during the pandemic.

Scott Kessler of the research firm Third Bridge said Apple was able to keep its momentum despite the global shortage of semiconductors, and sustained its growth in services, which have been important in diversifying its revenue stream.

“A major theme for the company over the last couple of years has been the emergence of services offerings and related revenues. Services accounted for more than 20 percent of revenues and have been a source of consistent growth.”

“Overall we would characterize this as a ‘gold medal’ performance by Apple during the quarter especially when considering the chip shortage overhang,” Ives said in a note to clients.

“We essentially view this quarter as the second-half and the start of the back stretch of the 5G supercycle and a ‘drop the mic’ quarter for Apple.”

Ives said Apple showed strength in boosting its services and managed growth globally including in China.

“While the chip shortage was an overhang for Apple during the quarter, we believe the iPhone and services strength in the quarter neutralized any short term weakness that the Street was anticipating three months ago,” he said.