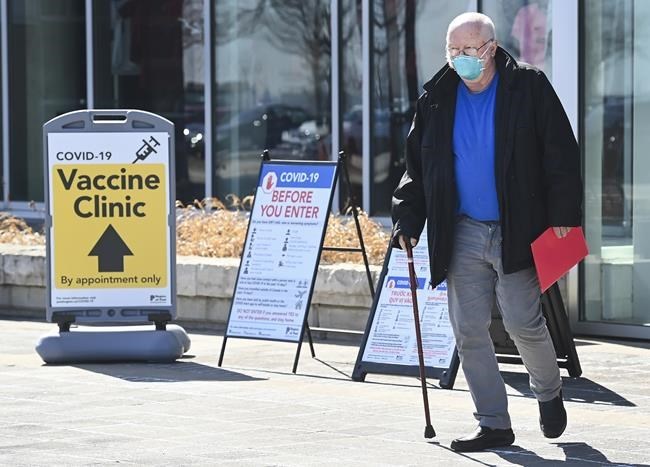 Ontario family doctors say they want to be more involved in the province’s COVID-19 vaccination effort.

The Ontario College of Family Physicians says a survey found 60 per cent of vaccine-hesitant respondents were more likely to get immunized if a family doctor endorsed and administered their shot.

Dr. Liz Muggah, president of the group, says it’s in the public interest to have family doctors more involved in giving out the Oxford-AstraZeneca and Moderna vaccines.

Some family physicians in six regions are offering Oxford-AstraZeneca shots to patients aged 60 and older as part of a pilot project.

Health Minister Christine Elliott says more vaccine supply will be sent to primary care physicians in the future, though she did not provide specifics.

The first of two expected shipments of Moderna vaccines this week is being delayed by 24 hours.

Canada is receiving 846,000 doses of the vaccine from Moderna this week, split between two shipments.

The first shipment was to arrive this morning in Canada, but is now set to arrive Wednesday, according to federal officials.

Nova Scotia is reporting one new case of COVID-19 today.

Health officials say the case involves a person in the eastern health region and is related to travel outside Atlantic Canada.

Officials say more than 66,000 doses of COVID-19 vaccine have been administered, more than 20,000 of which have been booster shots.

The province has 21 active reported infections.

Quebec is reporting 656 new cases of COVID-19 and four more deaths attributed to the novel coronavirus, including one in the past 24 hours.

Health officials said today hospitalizations rose by six, to 519, and 113 people were in intensive care, a drop of one.

Chief medical officer of health Dr. Heather Morrison says one case involves a female under the age of 19 who is a close contact of a previously reported infection.

She says the other case involves a male under 19 and may be related to regional travel.

There are now eight active reported cases on the Island.

Health Minister Christine Elliott says that 465 of those new cases are in Toronto, 329 are in Peel Region, and 161 are in York Region.

More than 50,000 doses of a COVID-19 vaccine were administered since Monday’s report.