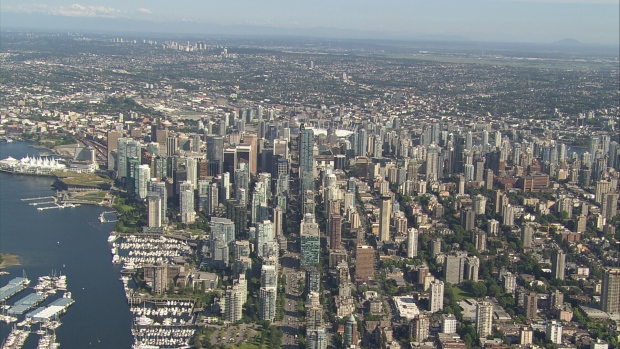 VANCOUVER —
Vancouver home sales were up 29 per cent compared with a year ago in October, making it the second-best October on record, the Real Estate Board of Greater Vancouver said on Tuesday.

The benchmark price for Vancouver homes hit $1,045,100 in October, up six per cent from last October and 0.4 per cent from September.

Bowen Island saw the biggest one-month increase in benchmark home prices, of 5.7 per cent, followed by Sunshine Coast, where prices rose 3.2 per cent. West Vancouver was the priciest neighbourhood, with a benchmark of $2,266,000.

The housing market has been catching up after COVID-19 lockdowns earlier this year stymied the spring selling season. Borrowing costs have also been low amid the COVID-19 response from the Bank of Canada.

October’s housing market snapshot shows that people are re-thinking their housing situation during the COVID-19 pandemic, with more days and evenings spent at home this year, said board chairwoman Colette Gerber.

“Home has been a focus for residents during the pandemic,” said Gerber in a statement.

Home sales, which were up also 1.2 per cent from September, rose amid a surge in sales of detached homes. In October, 1,335 detached homes changed hands, a 42.3 per cent increase from the same period last year. Detached homes also saw the biggest year-over-year price increase in October, up 8.5 per cent to $1,532,800.

The smaller market for attached homes, such as townhouses and rowhouses, also saw sales rise 45.9 per cent to 782 sales. The benchmark price was up 5.4 per cent, year-over-year, to $813,000.

But sales growth was slightly slower in Vancouver’s most common home type, apartments. Apartment sales hit 1,570, up 13.4 per cent compared with October 2019, while the benchmark price was up 4.4 per cent to $683,500.

The pace of sales in the condo market – particularly, the number of listings hitting the market – has been a focus of economists.

“As rents soften and vacancies rise, condo listings are spiking in Toronto, Montreal and Vancouver – albeit from low levels.”

Of October’s listings in Vancouver, 2,891 were apartments, 948 were attached homes, and 1,732 were detached homes.

But the 5,571 homes on the market last month – up 36.7 per cent from a year ago – was still below the 6,402 homes that were listed in September. The board said that a closely watched measure of housing supply and demand – the sales-to-active listings ratio – was above a key level that supports rising home prices. even for apartments.

“With demand on the rise, homes priced right for today’s market are receiving attention and, at times, garnering multiple offers,” said Gerber.

This report by The Canadian Press was first published Nov. 3, 2020. 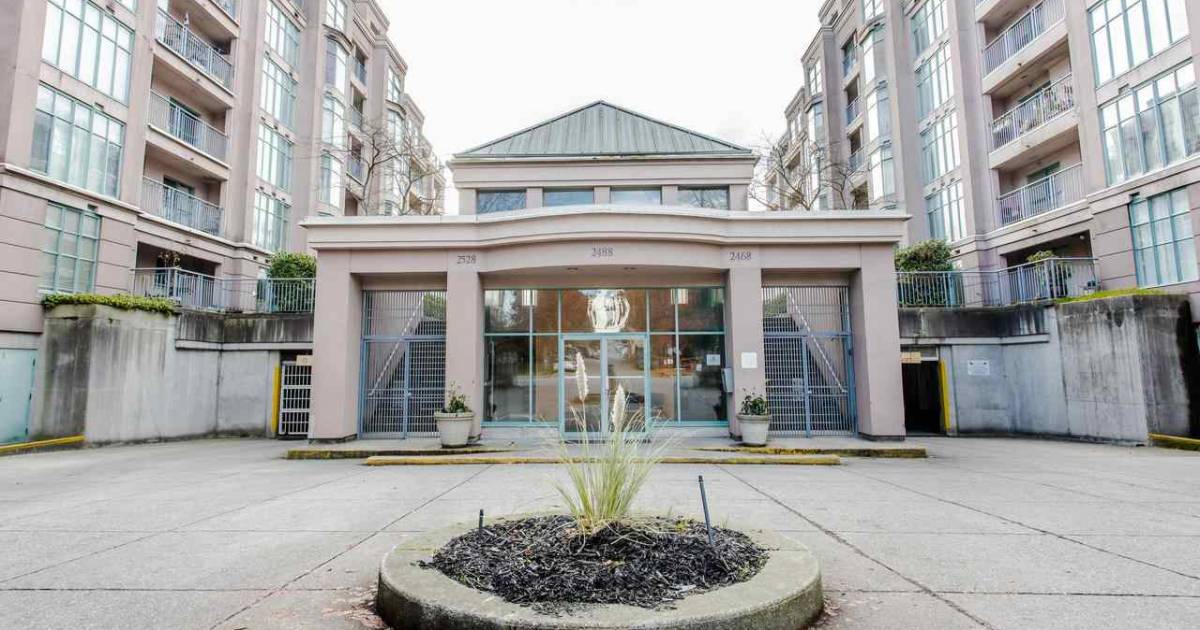 About two weeks ago, the Straight reported the sale of a unit at a leaky Vancouver condo complex.

It’s also cash-only, and no mortgage is available.

Gardenia Villa is known as a leaky condo development.

On September 16, 2006, Vancouver Sun reporters Fiona Anderson and Glen Bohn wrote that owners may have to pay up to $40 million to keep the complex from rotting.

“The project, designed by architect James Cheng and developed by Hong Kong-based Maple Resources Investment Co. Ltd., is a colourful eleven building complex with three gated courtyard gardens and a pool on five acres of land,” Anderson and Bohn reported.

Owners first noticed water issues at the 250-unit Gardenia Villa located at East Broadway and Nanaimo Street, “shortly after it was built in 1994”, the Sun noted in a report about 10 years later on October 2, 2016.

Reporter Keith Fraser wrote in the 2016 report that a judge ordered the strata council to impose on the owners a $16.8 million special levy to repair the complex.

Compared to its November 25, 2019 listing tag, the present listing price represents a $9,100 reduction.

The listing history of the property was tracked by Zealty.ca, a real-estate information site owned and operated by Holywell Properties.

RE/MAX Crest Realty describes the property as a “large” unit on the sixth floor of a “concrete leaky condo”.

“Potentially building will be Rain-screened or sold to Developer. No Mortgage available for this complex. Must buy all cash,” the listing states.

The two-bedroom, two-bath, plus den unit “faces towards the center courtyard which is very quiet”.

The other condo unit that the Straight reported about on November 17 is on the fifth floor of the same 2468 East Broadway leaky condo building. That was Unit 502, which the listing described as one that faces a “beautiful courtyard”.

This month, Melanie Galea started posting videos showcasing small businesses in Fort McMurray. From pet stores, to coffee roasters and spas, Galea has been trying to remind locals about what businesses they could be shopping from.

“It just seemed like it was needed more than ever,” said Galea.

“These business owners are ready for Christmas.”

She said there are concerns that businesses are going to be shut down and several businesses have already closed during the pandemic and flood.

“People are staying home, they’re maybe not spending quite as much money. Some businesses are doing well, but I’ve seen businesses shut down because of what’s happening right now.”

Galea did a similar promotion in 2015, making videos to showcase 30 businesses. Thirteen of those stores have since closed.

Galea put a call out for businesses to contact her about making a video, and she was even surprised to find out about companies she had never heard of before.

“It’s great to see there are new businesses,” said Galea.

“The reaction has been fantastic.”

Galea said her videos have even inspired former McMurrayites. She said a former Fort McMurray resident, now living in Edmonton, reached out to Galea to ask about buying gift cards from Fort McMurray shops.

The entire series took about 100 hours to create. She charged $50 per business to do the video, but it’s costing her more than $250 per episode.

“This is my give to the community,” said Galea. She started filming the series in the beginning of October.

Carley Johnson, owner of Firebag Coffee Company, started selling coffee and coffee accessories in February. She roasts coffee at her home in Fort McMurray and sells it online and at local markets.

Since her video went live, she’s had people reach out to her saying they didn’t know her business existed and says her sales have increased.

The company does free delivery in town, and she says they do about 25-30 orders a day.

“Since the video’s run I’ve probably had at least 5 to 10 new people contact me every day.”

Michael Langille’s video hasn’t gone public yet — it’s slated for Dec. 9. He’s the owner of The Little Pet Company, which is in the midst of expanding.

“Some people think that we’re still shut down since the flood,” said Langille. “It’s about broadcasting that we’re here.”

He said many people thought the flood destroyed the shop, which it didn’t.

The store was “busier than ever” for the first few months of the pandemic, but recently noticed a “sgnificant change” in the number of customers coming in.

Langille said he doubled his store’s inventory with the expansion, but “we’re not seeing double the sales by any means.”

“We might’ve seen a ten per cent increase, which is not what you want to see when you’re expanding your business.”

He’s hoping the video gets people coming into the store, and spending their dollars in town, rather than online.

(Bloomberg) — People will likely return to the office more quickly than expected and that will help boost the price of some commercial real estate, according to J.P. Morgan Asset Management.

Investors may be making a mistake by extrapolating the future from the current situation with lots of working from home due to Covid-19, according to Anton Pil, global head of alternatives at J.P. Morgan Asset Management, part of JPMorgan Chase & Co. Top malls worldwide should see a faster-than-expected rebound in traffic, he said, and there’s an overshoot in expectations about how many people will want the status quo versus returning to the office.

“I’m expecting a pretty significant rebound in valuation,” Pil said in a phone interview Wednesday. “Financing terms are at some of the lowest levels that we’ve ever seen, and the income generation continues to be quite strong, at least if you own top-notch offices in strong locations.”

Urban centers have been able to survive previous pandemics and will do so again this time, Pil said. He pointed to the co-working trend as evidence that even when people could work from home they found there was value in being around others.

However, investors are taking things slowly at this point, with commercial real estate dealmaking in the third quarter far below pre-pandemic levels, according to data from CBRE Group Inc. and Real Capital Analytics Inc.

Pil also said that easy monetary policy and available financing means that it’s harder to tell which companies have simply been hurt by the pandemic and which have business models that just aren’t viable. J.P. Morgan Asset Management has stuck to a relatively conservative approach that’s focused on the actual assets companies own, he said, to avoid potential trouble on that front.

Venture capital will be a very robust market over the next year or two, Pil added. Lots of new businesses will be started by people who were laid off or had salaries reduced during the pandemic, he said, plus the efficiency of working from home and broader adoption of cloud computing has made starting a business cheaper and easier around the globe.