Sweden’s VOI Technology, which operates e-scooter service in Europe, said on Tuesday it has raised $115 million from investors such as Raine Group and VNV Global, valuing the company at just over $1 billion.

The revenue of VOI, whose competitors include Germany‘s Tier and American companies Lime and Bird, has grown by 140% this year but the company has yet to record an annual profit.

The company has no immediate plans to enter the United States to take on American rivals on their home turf, CFO Mathias Hermansson said in an interview. “It’s safe to say that we have plenty of investment opportunities in Western Europe.”

By 2023, VOI intends to use only battery cells produced in Europe, in hopes of lowering its carbon footprint by 50%.

“We will definitely start preparing so we have the option to go public,” Hermansson said, adding that the company does not have a concrete plan to go public yet.

What Does an Employment Lawyer Do & When Do I Need One?

BMO unveils major U.S. expansion with $17-billion purchase of California-based Bank of the West – The Globe and Mail 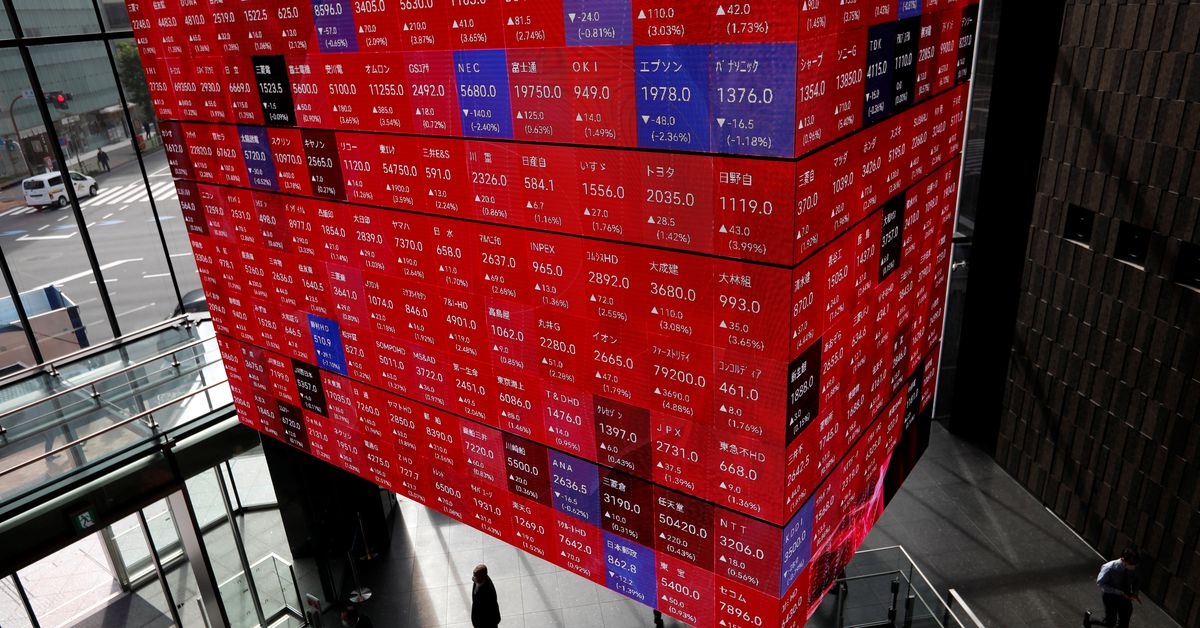 An electronic stock quotation board is displayed inside a conference hall in Tokyo, Japan November 1, 2021. REUTERS/Issei Kato

HONG KONG, Jan 25 (Reuters) – Asian shares and U.S. futures tumbled on Tuesday after a tumultuous Wall Street session, with investors nervous about the situation in Ukraine and eyeing the U.S. Federal Reserve amid worries about a move to tighter monetary policy globally.

NATO said on Monday it was putting forces on standby and reinforcing eastern Europe with more ships and fighter jets, in what Russia denounced as Western “hysteria” in response to its build-up of troops on the Ukraine border. read more

MSCI’s broadest index of Asia-Pacific shares outside Japan (.MIAPJ0000PUS) shed 1.2%, falling to its lowest in a month, and Japan’s Nikkei (.N225) skidded 2% to its lowest level since August.

There were sharp declines around the region. Hong Kong (.HSI) lost 1.64% and Korea’s KOSPI (.KS11) fell 1.67%. The Australian benchmark (.AXJO) tumbled 2.73% to hit an eight-month low, hurt also by a high inflation print Tuesday morning that stoked fears of approaching rate hikes Down Under. AZN0236PW

“But on the upside, valuations are becoming more attractive and earnings growth are still robust for some sectors. So I think we will see a tug of war in the market for this week,” he said.

Keeping traders on their toes, the Federal Reserve will begin its two-day meeting later on Tuesday, with investors starting to speculate that there is a small possibility that they will announce a surprise rate hike.

Investors are also anxiously looking out for any hints about the timing and pace of rate hikes expected later this year. Money markets are priced for a first rate hike in March, with three more quarter-point increases by year-end.

However, U.S. benchmark Treasuries were sitting out some of the speculation. Yields on benchmark 10 year notes were at 1.76%, steady on the day, having finished a choppy day of trading Monday near where they started.

Market nerves sent the dollar higher against most peers. The dollar index was at 95.922, hovering near a two-week high, having gained 0.29% overnight. FRX

The Aussie dollar gained briefly after the high inflation print, but failed to hold on to its gains and the risk friendly currency was still hovering near the one-month low hit the day before.

Gold held on to its recent gains as investors sought safety. The spot price was at $1,841 an ounce, flat on the day but near last week’s two-month high of $1,847.7.

In London, the FTSE 100 fell more than 2.6%, while exchanges in Germany and France slid nearly 4%.

But shares in the US staged a rebound and closed in positive territory despite falling more than 2% earlier.

The swings came ahead of a meeting of the US central bank and amid warnings of a potential invasion in Ukraine.

Nato on Monday said it was putting forces on standby, after Russia deployed some 100,000 troops and heavy armour at the Ukrainian border. On Sunday, the situation prompted the US, the UK and Australia to order diplomats’ families to leave Kyiv.

“This will continue to weigh on the markets for the foreseeable future until there’s some type of resolution and more clarity as to what the outcome looks like.”

Concerns about inflation, Covid and other issues have led to three weeks of consecutive declines on US markets.

The tech-heavy Nasdaq has fallen more than 10% from its previous high – a drop considered a market “correction” – and the broad-based S&P 500 is flirting with a similar decline.

Monday saw moments of torrid selling piling onto January’s losses, with the Dow down more than 1,000 points – nearly 3% – at one point.

But the index, which includes many of America’s biggest companies, closed nearly 0.3% higher.

The swings come as investors wait for action by the US central bank, which has said it expects to respond to soaring US inflation by raising interest rates this year.

Investors have also been also selling shares as they try to position themselves ahead of a wave of reports from companies about their end-of-year performance.

Last week, Netflix, one of the biggest names to share results so far, disappointed analysts with its forecast for the upcoming months, prompting shares to plunge more than 20%.

The declines were seen as a possible warning about other firms.

Walt Disney, which has been focusing on its streaming strategy to compete with Netflix, was among the biggest initial losers on the Dow on Monday, down more than 4% at one point, while Tesla, which reports this week, fell more than 6%.

Shares in both firms later recovered, with Disney ending flat and Tesla down about 1.5%. 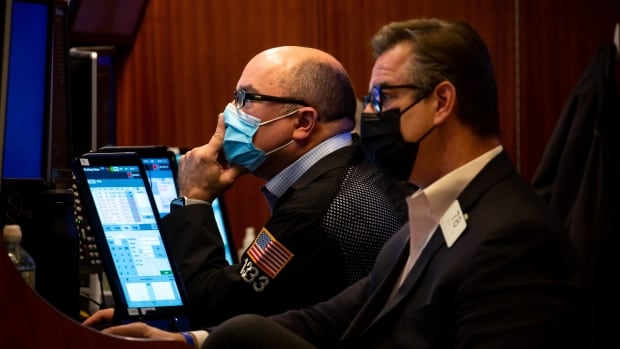 Stock markets plunged into the red before recovering to finish the day in positive territory on Monday, as fears over war in Ukraine and higher interest rates in the U.S. and Canada took investors on a wild ride.

Early in the afternoon, the Dow was off by more than 1,000 points, or about three per cent, and the tech-heavy Nasdaq was faring even worse as investors worried about the prospect of war in Ukraine.

“What really sparked the sell-off today is the fact that we seem to be marching inexorably towards a full-scale invasion of Ukraine by Russia,” Dennis Mitchell, CEO of Toronto-based investment firm Starlight Capital, said in an interview.

Canadian shares were not exempt from the sell-off, as the benchmark Canadian index was on track for its worst day in months, down more than 600 points, or three per cent at one point.

In the afternoon, however, the market changed direction and investors started buying up shares. All three major U.S. stock groupings, the Dow Jones Industrial Average, the S&P 500 and the Nasdaq, finished the day in positive territory.

“The selling that you’re seeing today is usually a good indication that this is a good buying moment,” Mitchell said.

After falling nearly three per cent by midday, the TSX mounted a comeback of its own in the afternoon but fell short of reversing its losses, and closed the day down 50 points to 20,571.

Dianne Swonk, chief economist with Grant Thornton, said the pandemic has been a time of unprecedented volatility for almost two solid years now, and that can sometimes result in wild swings for stock prices.

“This is giving us a lot of turbulence out there,” she said in an interview, “and the problem is it it ups the uncertainty at a time when uncertainty is already high.”

Prior to Monday’s trading, the major event of the week was slated to be the Bank of Canada’s interest rate decision on Wednesday. Expectations are growing that central banks will soon have to raise their interest rates to keep a lid on inflation, which has run up to the highest level we’ve seen in decades lately.

All things being equal, higher interest rates are bad news for stocks because they raise the cost of borrowing. That gives companies and investors less of an incentive to borrow to invest.

Currently, the market is pricing in about a 60 per cent chance of a rate hike in Canada as soon as this week. If one doesn’t come this time around, it’s a near certainty to happen next time the bank meets in March, according to trading in investments known as swaps.

Swonk said some of the uncertainty comes from figuring out how central banks are going to try to find the right balance between keeping a lid on inflation but also not harming the economy that is still being hit by Omicron.

“They don’t want to put the flame out on the economy, but they certainly want to cool it off a bit,” Swonk said. “That’s left many people unsure of how fast rates will go up.”