BENGALURU (Reuters) – The euro zone is on track for its first double-dip recession in nearly a decade, according to a Reuters poll of economists which points to a more muted recovery next year despite expectations for 500 billion euros of additional monetary stimulus.

As most of Europe grapples with a resurgence in coronavirus cases, forecasters who last month predicted the recovery would continue now expect the euro zone economy to shrink 2.5% this quarter after expanding a record 12.6% in Q3.

That is a dramatic turnaround from expectations of 3.1% quarterly growth as recently as July, and compares with 2.1% predicted in last month’s poll.

With new lockdowns and widespread restrictions accompanying the second wave of infections, over 80% of respondents, or 44 of 55, said a double-dip recession was now underway.

“As downside risks continue to materialise and the health situation keeps worsening, it now looks evident the recovery in place in the euro zone economy since May has ended,” said Angel Talavera, head of European economics at Oxford Economics.

“The euro zone economy will suffer a double-dip recession in Q4. This is a relatively modest fall compared to the declines we saw in the first half of the year…however, uncertainty around those forecasts remains incredibly high.”

Most said shrinking gross domestic product (GDP) in the current quarter after a recession in the first half of the year signalled a double-dip, but a handful of economists stuck to the technical definition of two straight quarters of contraction.

At the peak of the first wave of the pandemic, only three forecasters predicted a double-dip recession of some kind.

The economy is forecast to grow 0.8% in the first quarter of next year, a touch lower than the 1.0% forecast last month.

It will shrink 7.4% this year, less than the -8.0% predicted in the October poll, but still by far the worst on record. The poll put 2021 growth at 5.0%, the weakest median expectation since a poll taken in May.

While news of successful vaccine trials has sent stock markets back to record highs, economists were evenly split when asked if their latest forecasts were based on this recent progress. That suggests some upside potential for the recovery next year if the vaccines are ready for mass distribution.

In the meantime, the economy faces more trouble.

Poland and Hungary on Monday blocked the European Union’s 2021-2027 budget and historic 750 billion euro recovery fund due to be rolled out next year over a clause which makes access to money conditional on respecting the rule of law.

European Central Bank President Christine Lagarde made clear at this month’s policy meeting news conference and in a recent speech that another round of monetary stimulus next month is all but certain.

The latest Reuters poll expects the ECB’s Governing Council to top up its pandemic-related bond purchases by 500 billion euros at the Dec. 10 meeting, extending the programme by six months until December 2021.

That will take the total amount of pandemic-related purchases to 1.85 trillion euros.

Nearly 80% of respondents, 37 of 48, said the ECB would change the terms of its targeted long-term loans to financial institutions. They cited as possible changes: extending the term during which favourable conditions are applied; further lowering the rate it charges on them; or providing additional tranches.

“The ECB president’s comments confirm a sizeable ECB stimulus package is still very much on the cards despite the positive vaccine news,” said Nick Kounis, head of financial markets research at ABN Amro.

Inflation, which the ECB targets at close to but just below 2%, was expected to be -0.3% this quarter, rising to 0.1% next quarter. Only a handful of economists predicted inflation would touch the ECB’s target before end-2022.

Most of the polling was conducted before news of Moderna Inc’s experimental vaccine with a 94.5% efficacy rate.

(For other stories from the Reuters global economic poll:)

Chile's economy closer to growth after months of contraction – TheChronicleHerald.ca

SANTIAGO (Reuters) – Chile’s economic activity fell 1.2% in October from a year ago, the central bank said on Tuesday, as the Chilean economy inched closer to growth after months of contraction caused by the coronavirus pandemic.

The bank’s IMACEC economic activity index encompasses about 90% of the economy tallied in gross domestic product figures. The October figure was the economy’s best showing since February, when the economy grew 3.3%, bank statistics show.

But economic activity in Chile remained hobbled by the coronavirus outbreak, the bank said, even though cases of COVID-19 have fallen with the onset the southern hemisphere’s spring.

The bank said a drop in the production of goods and services had largely driven the contraction, but added the impact was softened by gains in commerce as quarantines were lifted across much of the nation.

Chile’s mining activity also grew by 1.6% in October, the bank said, a persistent bright spot during the pandemic.

Most of Chile’s sprawling copper mines maintained output even at the height of the country’s outbreak in May and June, a lifeline for an economy that depends on metals exports.

Financial data firm Refinitiv says the average economist estimate is for an annualized growth rate of 47.6 per cent for the quarter.

The firm also says the average economist estimate is for a 0.9 per cent increase in real GDP for September, which Statistics Canada will also unveil this morning. 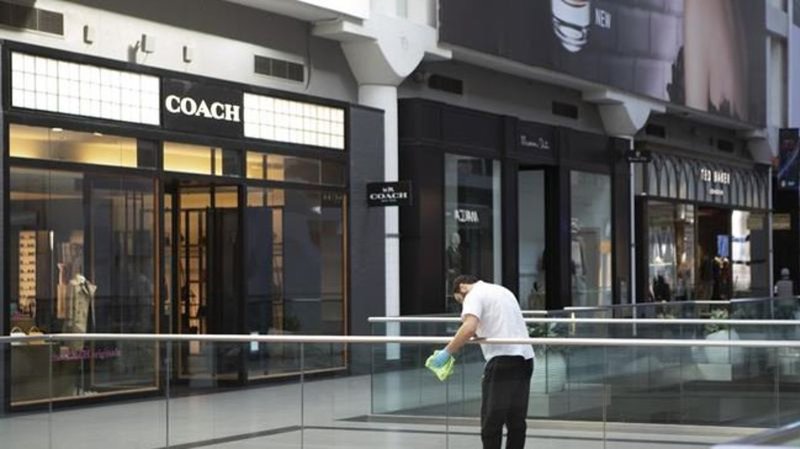