Baccarat is considered one of the most popular casino games around. For many, the work of Ian Fleming, and in particular Casino Royale, is what first introduced them to the concept of the game. It was James Bond’s casino game of choice, in the aforementioned first James Bond novel, that has more than done its share in popularising the game as one of the more sophisticated within the casino world. While it has always been popular, it has always remained on the sidelines in relation to casino games such as Blackjack and Poker. Despite this, it is one of the casino games that has successfully made the switch from a traditional brick-and-mortar setting to a virtual environment in the form of online baccarat. Before taking a closer look at why exactly this transition has proved successful, let’s take a brief look at the history of the game of Baccarat itself.

The game of Baccarat has its roots as far back as medieval times and as a result, its original origin is uncertain. What is known is that the game was a popular pastime in the fifteenth century, especially amongst soldiers in the Franco-Italian War. It is because of this that Italy and France are both considered to be the shared originators of the game even to this day, with of course people from both sides claiming to be its true inventors.

What is know for sure is that Baccarat did move to France as a result of the war under the name Chemin de Fer. It was soon adopted by the French aristocracy, including by King Charles VIII himself. From France, the game made its way across the English Channel to Britain, where it too became a popular pastime. It was not long before the game of Baccarat was appearing all over the globe, including in South America and the Caribbean. As the game migrated from place to place, the rules would be slightly tweaked in order to suit the local players. For example, one of the biggest adaptations that stuck as a result of the game’s travels was that players did not play against one another, but only against ‘the house’.

While the game did eventually make its way to the casino rooms of Las Vegas in the 1950s, it was not an instant success. Despite the game not having instantaneous mass appeal, casino owners were intrigued by its simple rule set and decided to find it its own special place in their establishments. A large proportion of casinos would position their Baccarat tables in separate rooms with expensive furniture, and set high minimum bets. This only added to the games mystery, and as a result, it attracted a certain type of individual to sit and play. There was somewhat of a special allure when it came to playing the game of baccarat in a casino.

While the game of baccarat may have remained in the shadows in this sense, it was always spoken about with a sense of excitement due this very fact. As we entered the digital age, and online casinos first began going live in the 1990s, casino games such as Poker and Slot Machines made their obvious jump into the virtual world. However, it was the transition of one game in particular, from the shadows of casino floors to the bright lights of the digital world, that proved to be the most intriguing. The online casino world turned Baccarat on its heads, and after years of exclusivity, the public were eager to finally have their turn to play in this new virtual environment.

One no longer needed to be part of an exclusive club, to know the right place to go to find a table, or to have the ability to place high minimum bets. It was now suddenly possible for anyone, anywhere to play online baccarat, all you needed was access to the internet and a computer or smart phone. After years of speculation, everyone wanted to try their hand at Baccarat, and the online version vey quickly became incredibly popular among players of all levels.

The online version is of course played in the same way as it is in those special rooms in Las Vegas, with bets being placed against the house, who also serves as the banker. The original concept of the internet was to share information amongst the masses and allow people to engage and experience things they were previously unable to do. While Baccarat was technically open to anyone who wanted to play, it was extremely difficult to do so for the reasons outlined in this article. The arrival of an online version suddenly pulled back the curtain and put everyone at the same table. 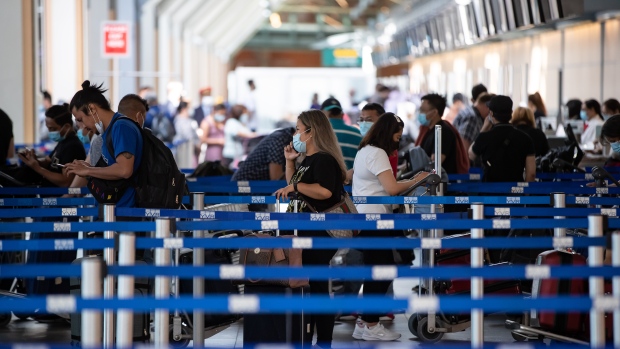 TORONTO —
The Canadian government has quietly lifted its advisory against non-essential international travel, marking the first time since March 2020 that the notice has been lifted.

A travel notice on the Government of Canada website had been advising travellers against all non-essential international travel, but is now replaced with a notice urging all travellers to be fully vaccinated before a trip.

“Be aware that although you are better protected against serious illness if you are vaccinated, you may still be at risk of infection from the virus that causes COVID-19,” the updated advisory states.

“If you’re unvaccinated, you remain at increased risk of being infected with and spreading the virus that causes COVID-19 when travelling internationally. You should continue avoiding non-essential travel to all destinations.”

The updated notice also urges travellers to keep up-to-date on the COVID-19 situation in their destination, to follow the local public health measures and follow the traditional measures, such as wearing a mask, hand washing and physical distancing.

“The Government of Canada will continue to assess available data and indicators—including the vaccination rate of Canadians, the border test positivity rate, and the epidemiological situation globally and in Canada―and adjust advice as needed,” a spokesperson for Health Canada said in an emailed statement to CTVNews.ca.

The United States would come to Taiwan‘s defense and has a commitment to defend the island China claims as its own, U.S. President Joe Biden said on Thursday, though the White House said later there was no change in policy towards the island.

“Yes, we have a commitment to do that,” Biden said at a CNN town hall when asked if the United States would come to the defense of Taiwan, which has complained of mounting military and political pressure from Beijing to accept Chinese sovereignty.

While Washington is required by law to provide Taiwan with the means to defend itself, it has long followed a policy of “strategic ambiguity” on whether it would intervene militarily to protect Taiwan in the event of a Chinese attack.

In August, a Biden administration https://www.reuters.com/world/asia-pacific/us-position-taiwan-unchanged-despite-biden-comment-official-2021-08-19 official said U.S. policy on Taiwan had not changed after the president appeared to suggest the United States would defend the island if it were attacked.

A White House spokesperson said Biden at his town hall was not announcing any change in U.S. policy and “there is no change in our policy”.

“The U.S. defense relationship with Taiwan is guided by the Taiwan Relations Act. We will uphold our commitment under the Act, we will continue to support Taiwan’s self-defense, and we will continue to oppose any unilateral changes to the status quo,” the spokesperson said.

Biden said people should not worry about Washington’s military strength because “China, Russia and the rest of the world knows we’re the most powerful military in the history of the world,”

“What you do have to worry about is whether or not they’re going to engage in activities that would put them in a position where they may make a serious mistake,” Biden said.

Military tensions between Taiwan and China are at their worst in more than 40 years, Taiwan’s Defense Minister Chiu Kuo-cheng said this month, adding that China will be capable of mounting a “full-scale” invasion by 2025.

Taiwan says it is an independent country and will defend its freedoms and democracy.

China says Taiwan is the most sensitive and important issue in its ties with the United States and has denounced what it calls “collusion” between Washington and Taipei.

“We are not the troublemaker. On the contrary, some countries – the U.S. in particular – is taking dangerous actions, leading the situation in Taiwan Strait into a dangerous direction,” he said.

The incident occurred on the set of independent feature film “Rust,” the Santa Fe County Sheriff’s office said in a statement.

“The sheriff’s office confirms that two individuals were shot on the set of Rust. Halyna Hutchins, 42, director of photography, and Joel Souza, 48, director, were shot when a prop  firearms was discharged by Alec Baldwin, 68, producer and actor,” the police said in a statement.

A Variety report https://bit.ly/3nnyldg said the shooting occurred at the Bonanza Creek Ranch, a production location south of Santa Fe in New Mexico.

No charges have yet been filed in regard to the incident, said the police, adding they are investigating the shooting.

Baldwin’s representatives did not immediately respond to Reuters’ request for comment.

(Reporting by Bhargav Acharya in Bengaluru; Editing by Karishma Singh)