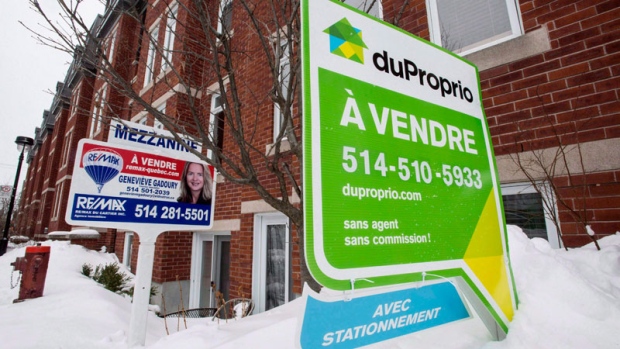 MONTREAL —
It remains a real estate sellers’ market in Montreal though sales were down by almost 20 per cent in December from the same month in 2020.

A Quebec Professional Association of Real Estate Brokers (QPAREB) report said real estate sales dropped by 19 per cent in December, but 2021 sales ranks second for most active December sales on record with 3,675 sales.

“This downturn is consistent with a marked decrease in new listings which is always more significant in December,” said market analysis director Charles Brant.

Brant said buyers are likely trying to make a purchase before announced interest rate hikes in 2022.

“Consequently, the ongoing marked market imbalance in favour of sellers continues to result in a sharp rise in prices on the outskirts of the Island of Montreal, all property categories combined,” Brant said.

Condo sales also were down by 10 per cent.

Sales decreased most sharply in Laval (27 per cent), the North Shore (26 per cent), the South Shore and Saint-Jean-sur-Richelieu (18 per cent) and the Island of Montreal (14 per cent).

“On the island, prices for single-family homes have tended to level off in the past few months, particularly in areas where median prices are reaching levels that are unaffordable for a large proportion of potential buyers, thus favouring Montreal’s peripheral areas,” said Brant.

Much like sales, listings have declined with condos dropping by 29 per cent, single-family homes by 26 per cent, and plexes by six per cent.

Canadian home sales up 0.2% in December

Canadian home sales rose 0.2% in December from November even as supply fell to a record low level, data from the Canadian Real Estate Association showed on Monday.