DETROIT — Tesla confirmed Thursday that CEO Elon Musk will get the first tranche worth nearly $770 million of a stock-based compensation package triggered by the company meeting several financial metrics.

The electric car and solar panel maker’s board certified that Musk earned the big payout, according to a filing with the U.S. Securities and Exchange Commission. The filing says Musk can buy 1.69 million shares of Tesla stock for $350.02 each, but it wasn’t clear whether he had exercised the stock options. His payout is based on the difference between the option price and Thursday’s closing share price of $805.81.

Musk earned the options as part of an audacious compensation package approved by the board in 2018.

According to the filing, the board certified that Tesla had reached the milestones by hitting $20 billion in total revenue for four previous quarters and a total market value of $100 billion. The company also reached $1.5 billion in adjusted pretax earnings, but that must still be certified by the board, the filing said.

Musk has to hold the stock for a minimum of five years, under the terms of the compensation package.

Musk can afford to wait before cashing in on his latest windfall, given his wealth is estimated at $39 billion by Forbes magazine.

All told, the incentives approved by Tesla’s board in 2018 consist of 20.3 million stock options that will be doled out in 12 different bundles if the company is able to reach progressively more difficult financial goals. It’s one of the biggest corporate pay packages in U.S. history.

In order for Musk to receive all 20.3 million stock options, Tesla will have to generate adjusted annual earnings of $14 billion on annual revenue of $175 billion coupled with a market value of $650 billion. In the past four quarters, Tesla, which is based in Palo Alto, California, has reported adjusted earnings totalling $3.6 billion on revenue totalling $26 billion.

SpaceX Crew Dragon launch: what to expect from the company’s first human mission to space – The Verge

WINNIPEG —
Stargazers in Manitoba can get a glimpse of the brightest comet in years as it hurtles past Earth over the next several days.

Comet NEOWISE C/2020 F3, named after the satellite that first discovered it, has been travelling towards Earth in recent days, before it returns to the outer edges of the solar system.

Photos submitted from Manitobans show the comet as it appeared in the morning sky on Thursday. 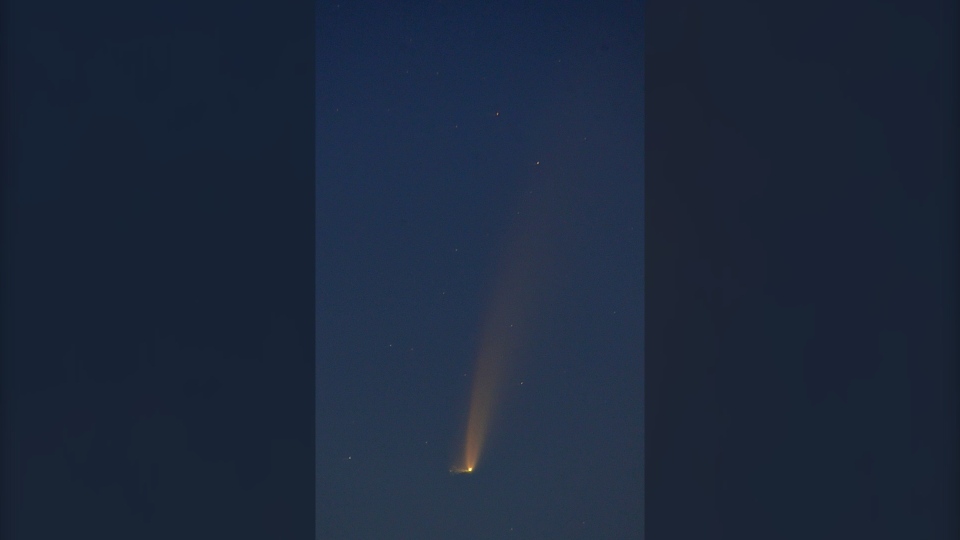 Scott Young, who is the manager of the Planetarium and Science Gallery at the Manitoba Museum, said this comet wasn’t expected to be as bright as it is.

“This wasn’t predicted to be all that impressive but as it swung around the soon it suddenly burst into brightness,” said Young.

It’s one of the few “naked-eye comets” of the 21st century, meaning it can be seen without a telescope. The comet was first discovered on March 27, 2020, and NASA was unsure if it would make it to Earth as the comet travelled towards the sun.

Young said over the next several days this will be the only time to see the comet. 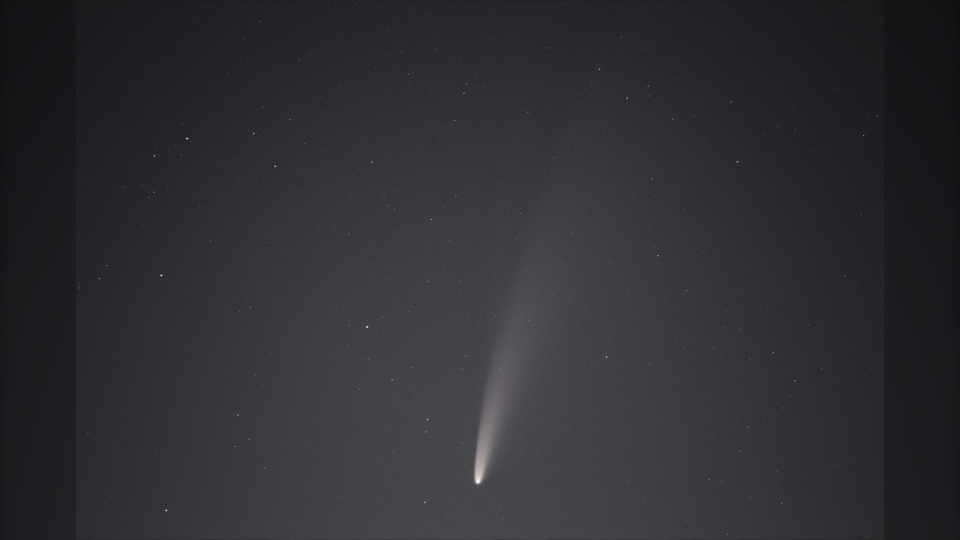 Young added the reason why this comet is so unique is because of how bright it is.

“I can count on the fingers of one hand how many comets we’ve had that have been this impressive. I mean, I have seen a lot of comets, but there’s only a couple that have outshone this in my entire lifetime.”

Young says if people want to see it, it’s best to be away from the city and all the lights. 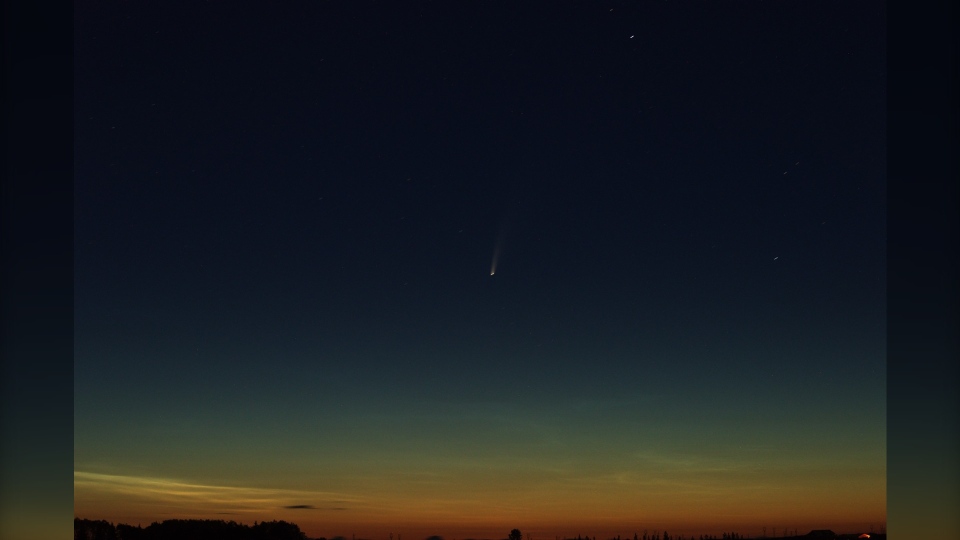 – With files from CTV’s Jackie Dunham.

Astronomers have discovered a bunch of weird unidentified circles in space, visible only in radio light, thanks to images captured by one of the most sensitive observatories on the planet.

The mysterious rings “do not seem to correspond to any known type of object” and so have been simply dubbed Odd Radio Circles, or ORCs, according to a new study, led by Western Sydney University astrophysicist Ray Norris.

“We have discovered, to the best of our knowledge, a new class of radio-astronomical object, consisting of a circular disc, which in some cases is limb-brightened, and sometimes contains a galaxy at its centre,” Norris and his colleagues said in the study, which was recently posted on the preprint server arXiv and has not yet been peer-reviewed.

“None of the known types of radio object seems able to explain it,” the team said.

The team describes four of these inscrutable ORCs, three of which were detected by the Australian Square Kilometre Array Pathfinder (ASKAP) telescope, a network of radio antennae that covers four square kilometers of the Australian Mid West. ASKAP has been scanning the sky in the radio spectrum to create an Evolutionary Map of the Universe that could help scientists better understand the development of stars and galaxies.

Norris and his colleagues noticed three odd blobs in ASKAP’s 2019 observations. Each of the circles measures about one arcminute across, which is roughly equivalent to 3 percent the diameter of the Moon. However, it’s difficult to tell how far away the ORCs are based on these images, and that in turn makes it challenging to estimate the actual size of the objects, at least until more detailed observations are made.

The glowing circles are so bizarre that Norris and his colleagues wondered if they might be an instrumental glitch, especially since radio imagery often contains errors that look like rounded apparitions, according to the study.

But when the team went hunting through archival datasets, they were surprised to discover that a fourth ORC was imaged all the way back in 2013 by India’s Giant Metrewave Radio Telescope, though nobody had made note of it at the time.

By combing through past radio surveys, as well as obtaining new images with the Australia Telescope Compact Array, the researchers were able to collect at least two independent observations of each ORC. The fact that the circles show up across multiple telescope datasets makes instrumental error “a very improbable explanation,” the team said in the study.

So if the ORCs are real celestial objects, what could they be? Norris and his colleagues outline several possible identities for the objects, though none of them are an obvious fit.

The circles might be the fallout of exploded stars, or bubbles blown out by winds in galactic star factories, or “Einstein rings,” which are signatures of warped spacetime created by the gravity of massive objects. They could be the ghosts of highly energetic events that occurred millions of years ago, such as gamma ray bursts, fast radio bursts, or plasma jets emitted by active galactic cores.

“We also acknowledge the possibility that the ORCs may represent more than one phenomenon,” the team noted, adding that they may have been “discovered simultaneously because they match the spatial frequency characteristics of the ASKAP observations, which occupy a part of the observational parameter space which has hitherto been poorly studied.”

Norris and his colleagues plan to continue examining the ORCS to see if they can tease out some of these tantalizing mysteries. One thing’s clear, however: discoveries like this are likely to become more common as radio astronomy matures in the coming years.

Within the next decade or so, ASKAP will join the Square Kilometre Array, a massive intercontinental observatory currently in construction, which will be by far the most sensitive radio instrument on Earth once it’s operational. The discovery of the ORCs is fascinating by itself, but it also foreshadows a new era of astronomy that is already sharpening our view of space.

This article originally appeared on VICE US.

By signing up to the VICE newsletter you agree to receive electronic communications from VICE that may sometimes include advertisements or sponsored content.

CINDY DAY: Don’t miss this once in a lifetime event to see Comet NEOWISE – SaltWire Network

If you’ve been paying attention to the news lately, you are most likely familiar with the word “NEOWISE.” If not, let me introduce you:

NEOWISE is the name of a comet that was discovered in March 2020. This comet is visiting from the most distant parts of our solar system and for the next couple of weeks, could put on quite a show. The comet made its once-in-a-lifetime close approach to the Sun on July 3 and will cross outside Earth’s orbit on its way back to the outer parts of the solar system by mid-August.

On July 22, the comet will reach its closest point to Earth — a distance of 103 million kilometres — but because comets can be unpredictable, a little like the weather, experts are not sure that it will still be visible to the naked eye.

For the last few days, NEOWISE has been visible an hour before sunrise, very low in the northeastern sky. As of Sunday, the comet will be visible in the evening as well. About an hour after sunset, it will appear near the northwestern horizon. As the month goes on, it will rise higher in the sky, moving toward the Big Dipper. Right now, the comet is visible to the naked eye, but a good pair of binoculars would offer a better view. In very dark skies, you should be able to spot a nucleus and get a pretty good look at the fuzzy comet and its long, streaky tail.

Its name, in fact, is an acronym. The comet was discovered by NASA’s Near-Earth Object Wide-field Infrared Survey Explorer or NEOWISE.

From its infrared signature, experts have discovered that the icy visitor is about five kilometres in diameter. It has a nucleus that is covered with sooty, dark particles left over from its formation near the birth of our solar system about 4.6 billion years ago.

After this encounter, astronomers expect Comet NEOWISE to bid farewell for quite some time. Its long, looping orbit around our star will bring it back to Earth’s vicinity more than 6,000 years from now.

Cindy Day is the chief meteorologist for SaltWire Network