Bitcoin hit $60,000 for the first time in six months on Friday, nearing its all-time high, as hopes grew that U.S. regulators would allow a futures-based exchange-traded fund (ETF), a move likely to open the path to wider investment in digital assets.

Cryptocurrency investors have been waiting for approval of the first U.S.  ETF for Bitcoin , with bets on such a move fuelling its recent rally.

Such a move would open a new path for investors to gain exposure to the emerging asset, traders and analysts said.

“ETFs open up a raft of avenues for people to gain exposure, and there will be a swift move to these structures,” said Charles Hayter, CEO of data firm CryptoCompare, which tracks ETF products.

“It reduces the frictions for investors to gain exposure and gives traditional funds room to use the asset for diversification purposes.”

Bitcoin’s moves on Friday were spurred by a tweet from the SEC’s investor education office urging investors to weigh risks and benefits of investing in funds that holds bitcoin futures contracts, said Ben Caselin of Asia-based crypto exchange AAX.

Graphic: Bitcoin on the rise https://fingfx.thomsonreuters.com/gfx/mkt/movanjqkapa/bitcoin.PNG

Crypto ETFs have launched this year in Canada and Europe, growing in popularity amid surging interest in digital assets.

SEC Chair Gary Gensler has previously said the crypto market involves many tokens which may be unregistered securities and leaves prices open to manipulation and millions of investors vulnerable to risks.

Citing people familiar with the matter, the Bloomberg report said proposals by ProShares and Invesco, based on futures contracts, were filed under mutual fund rules that Gensler has said provide “significant investor protections”.

The SEC did not immediately respond to a request for comment on the report.

“It’s one of the final frontiers for mandate access,” said Joseph Edwards, head of research at crypto broker Enigma Securities.

“Plenty of Americans in particular have strings attached to how they deploy a lot of their wealth. It allows bitcoin to get in on the sorts of windfall that keep U.S. equities as consistently strong as they are.”

(Reporting by Tom Wilson in London and Alun John in Hong Kong, and Mrinmay Dey and Shubham Kalia in Bengaluru; editing by Alexander Smith and Jason Neely) 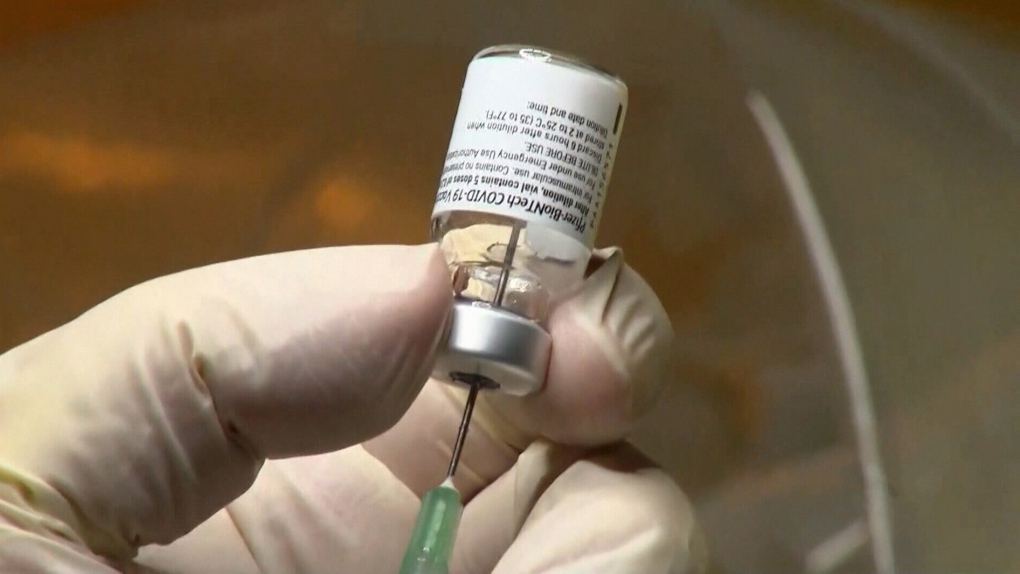 Dozens of pharmacies in B.C. are delivering mRNA COVID-19 vaccines, yet still don’t know if they will be part of the immunization plan when it comes to kids aged five to 11.

At the Fort St John pharmacy, demand for the Moderna shot isn’t exactly overwhelming, but increasing every week, according to pharmacist Michael Ortynsky. He says aside from some paperwork, things have run smoothly, thanks in large part to specialized vaccine fridges.

“It’s checked every day, twice a day, as a minimum and it’s connected to an alarm if the temperature rises above five degrees,” he explained in an interview with CTV News.

Once refrigerated, the vaccine can last up to 30 days.

Several Northern pharmacies have been able to distribute the mRNA vaccine since late August. In the Lower Mainland, 54 pharmacies are doing the same — many administering Pfizer — as part of a pilot project. According to the ministry, they’re delivering on average 4,000 doses each week.

Yet despite two months of experience, it’s still unclear whether pharmacies will be part of the vaccine rollout for kids aged five to 11 who are expected to get the green light for a jab next month.

On Tuesday, Dr. Bonnie Henry told reporters, “There will be some pharmacies that will be involved, but also health authority clinics in different settings.”

Pharmacists did provide AstraZeneca but B.C. has so far resisted a wide-scale approach involving pharmacies.

A statement from Angie Gaddy, communications director for the BC Pharmacy Association, says in part, ‘We are in discussions with the government on planning for mRNA vaccines in B.C. pharmacies and what it will take to roll out on a large-scale basis.”

Dr. Brian Conway with the Vancouver Infectious Diseases Centre is encouraging government to let go of control and “democratize” the system.

“There are over 300,000 children aged five to 11 in this province. That’s not a small task getting them all vaccinated, ” he told CTV News.

Conway thinks it will be essential to get as many kids immunized as quickly as possible. As of Wednesday nearly 89 per cent of those aged 12 and older had at a least one shot of vaccine. It’s not been enough to slow transmission, which has been rising in children.

“And as soon as they’re finished asking their questions and they’re decide to be going ahead with the vaccination of that child, that vaccination should be immediately available,” added Dr. Conway.

“My experience is there’s a lot of misinformation out there and we’ll gladly take the time to talk to people about it,” said Ortynsky.

“I know most of the pharmacists I communicate with during the week are more than willing to, you know, accommodate the patient’s needs to give them this really important vaccine, when they need it.”

The chief strategist of National Bank of Canada says the S&P/TSX Composite Index is the place to be for investors – particularly those who want a hedge against inflation. And he’s warning pension funds that have turned their back on Canada may come to regret the decision.

“The global economy, notwithstanding some uncertainty relating to the global supply chain, is just chugging along and … you know inventories are so depleted that there’s going to be high demand for global industrial production for the foreseeable future. You would expect the Canadian economy and the Canadian stock market to do well in this environment,” said Stéfane Marion, who also serves as National Bank’s chief economist, in an interview Thursday.

Marion and his team presented historical data to clients Thursday to illustrate their view that Canada offers attractive baked-in hedges against inflation. According to National Bank, the TSX delivered an average annualized return of 2.3 per cent in periods when inflation topped four per cent for prolonged periods. By comparison, the S&P 500 posted a negative return of 5.9 per cent during those same periods. 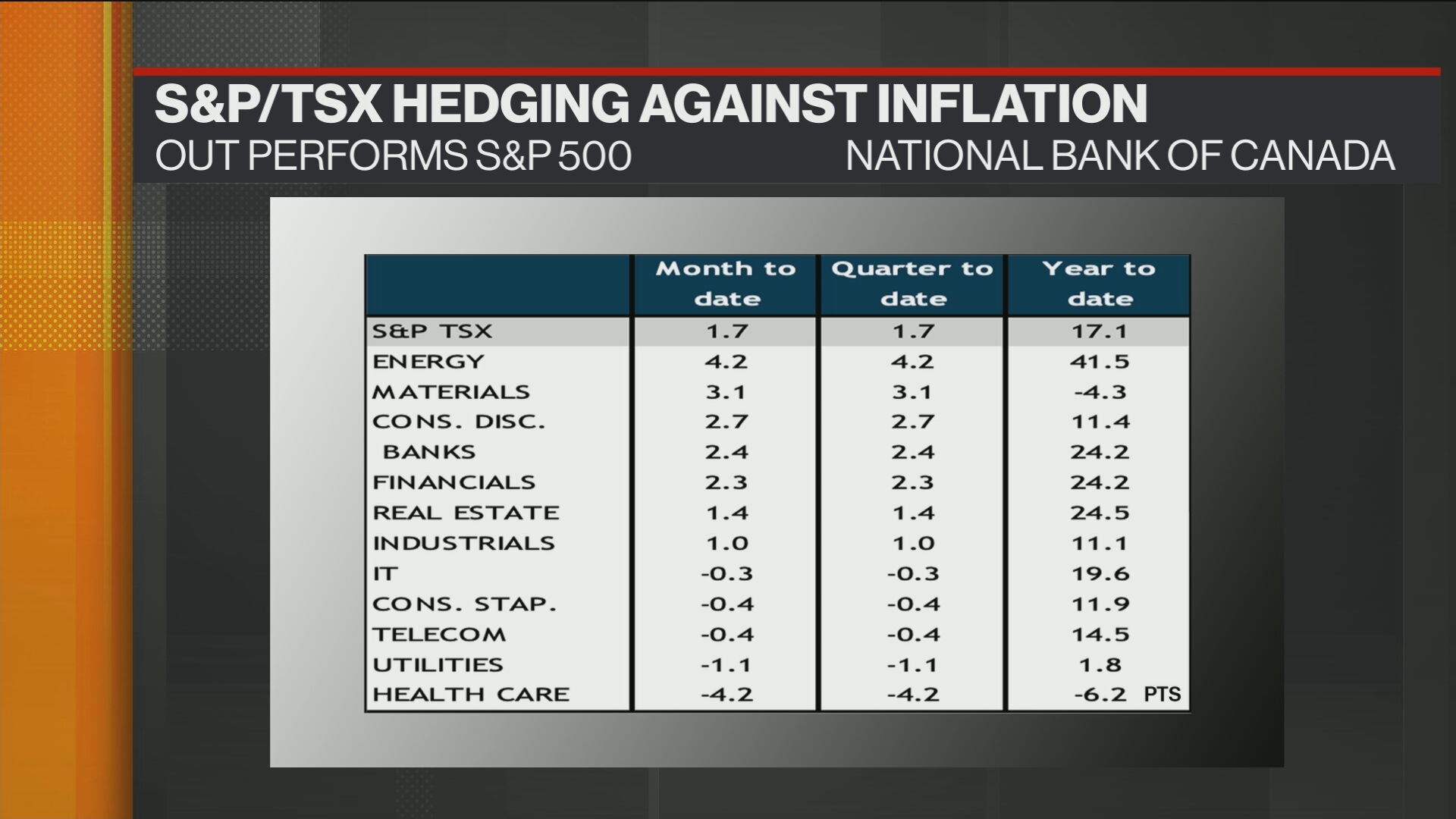 In the interview, Marion acknowledged that Canada’s equity market — and the energy sector in particular — has fallen out of favour in some circles as pressure mounts on major global institutional investors to take ESG (environmental, social, governance) factors into consideration. As far as he is concerned, however, Canada’s energy sector isn’t getting the credit it deserves.

“I understand that ESG concerns are paramount now for investment decisions,” he said. “But at the same time, it is false to say that the Canadian energy sector isn’t doing anything.”

And while there have been some high-profile examples of top international investors turning their back on Canadian energy stocks, most notably when Norway’s trillion-dollar sovereign wealth fund blacklisted names like Suncor Energy Inc. and Canadian Natural Resources Ltd. last year, it has recently also become a domestic phenomenon.

Last month, as part of its broader climate strategy, the Caisse de dépôt et placement du Québec said it will exit its exposure to oil production by the end of next year.

“To the extent that [Canadian energy is] transitioning, I don’t think that we should discourage them to transition,” Marion said, while pointing to Europe’s energy crisis as a case study in “disastrous scenarios” that the world faces if economies abandon fossil fuel in haste.

“I think that from an investment perspective, you have a responsibility to protect your downside and at the same time, yes – you can still be ESG and invest in Canadian energy, provided that you pick the right companies. As I say, I insist we have global leaders in terms of carbon capture and so not all energy is bad in this type of framework.”

Canada’s energy stocks have become the star performers on Bay Street this year, with the TSX’s energy subgroup surging almost 46 per cent year-to-date through the end of trading Thursday, when once again the group contributed to gains on a day when the index came within two points of closing at a record.

And as far as Marion is concerned, there are more gains to come.

“We have uncertainty relating to monetary policy going forward so that could rock the markets; but on a relative basis, I absolutely have strong conviction that Canada is the place to be and that will also mean a stronger Canadian dollar,” Marion said, going on to add that according to his team’s models, the loonie is undervalued by as much as 10 cents.