Canada is setting aside C$40 billion ($31.2 billion) to compensate Indigenous children and families in foster care for suffering discrimination, and will start paying out once a protracted lawsuit is settled, officials said on Monday.

The compensation decision affects some 55,000 children.

The Canadian Human Rights Tribunal ruled in 2016 that the federal government allocated fewer funds for child and family services of Indigenous people than for others, pushing more Indigenous children into foster care.

“The government of Canada is provisioning C$40 billion to provide compensation and to commit the funds necessary to implement long-term reform so that future generations of First Nations children will never face the same systemic tragedies,” said Indigenous Services Minister Patty Hajdu.

In October, the government appealed the tribunal’s 2019 follow-up order that Ottawa pay each affected child C$40,000. But it said on Monday it would pause the appeal while engaging in talks with the initial complainants.

“We have made considerable progress… Our discussions remain progressive and productive,” Hajdu said a statement.

The government’s legal strategy came under increased scrutiny this year after hundreds of unmarked graves were discovered at the sites of former residential schools.

Until as recently as 1996, Canada‘s residential school system separated Indigenous children from their families and sent them to boarding schools where they were malnourished, beaten and sexually abused.

Steven Kaszab
Ditch the Disposables (Plastic use).
Since 1950, the world has produced 9.2 tonnes of plastic, of which only 10% has been recycled. Did you know? that a single-use bag is used for only 12 minutes? Here are some small actions we can do that could add up to huge results.
There are many ways to reduce the use of disposable items:
Bring your own reusable mugs( many coffee shops offer discounts when you bring in your own mug).
Bring your own bags shopping.
Refuse single-use plastics like straws and utensils.
Use reusable alternatives like beeswax wraps and containers for food storage.

In today’s society products are short-lived and disposable. Sharing and repairing are some of the best ways to reduce household waste and money.
There are many actions we can take to extend a product’s lifespan.
Shop at thrift stores.
Borrow or rent instead of buying new, especially for a tool or appliance that you can only use occasionally.
Use the library system to borrow or download your next read.
Sell or give away items you no longer use.
Learn how to make basic repairs. Local repair groups are a great resource.
Get to know your local repair shops. Always go local.

Did you know that 1/4 of the food the average household buys is thrown out, and half of that food is edible? The average Canadian household spends $1,766.00 on food that is wasted over a year and that costs the Canadian economy$49 billion annually.
What to do?
Make a meal plan.
Make a grocery list and stick to it.
Practice first in, first out positioning new products behind older ones.
Get creative with leftovers.
Understand best before dates and store food properly.
Participate in The Circular Economy.
A circular economy means moving towards a system of production and consumption that involves reusing, sharing, leasing, repairing, refurbishing, and recycling materials and products as long as possible.
Above all else, put pressure upon corporations that make your favorite products and products that you consume daily. You must demand better, longer-lasting, and longer-lasting products. Better ways to package items, and always buy locally, as it guarantees freshness and accountability. If you are not satisfied with a product, it is easier to communicate with a local firm other than one a world away.
Buying Locally is a democratic process we can all enjoy.
Saving our world, increasing local employment, and saving money all lie within our personal preview.
I know the holidays are upon us, but there is a point when we will need to stand firm against the wasteful economic system we live within. Waste not – Want not. Buy what you need, and not what corporate Canada tells you to buy.
We are the sum total of the choices we have made. it was true in Eleanor’s time and also in ours. We get the society we have made. Do you want your children to have a bright future? Make changes today.
Steven Kaszab
Bradford, Ontario
skaszab@yahoo.ca
Continue Reading 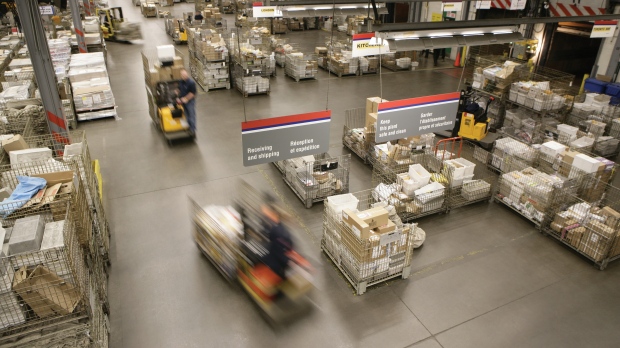 Canada Post workers risk being sent home from work if they wear masks other than ones issued by the corporation, even if their masks are an upgrade in safety.

Employees who buy their own N95 masks and bring them to work are being told to switch to company issued cloth masks or risk being sent home.

“The mask requirements, like our vaccine mandate, are mandatory and necessary under direction from the (Employment and Social Development Canada [ESDC]),” a spokesperson for Canada Post said in an emailed statement. “Therefore anyone at work must comply.”

“If they don’t have the masks we’ve provided, we have additional masks and disposable medical masks on hand. If an employee still does not wish to comply, they are asked to leave the workplace.”

Canada Post said Public Health Agency of Canada supports the use of cloth masks and that the company following directives from the ESDC that require employees to wear company supplied masks to ensure their quality.

“The company fully supports these guidelines and therefore requires all employees to wear a Canada Post-supplied face covering, which is either a reusable cloth face covering or a disposable medical mask,” Canada Post said.

“Canada Post continues to monitor best practices and recommendations with respect to face coverings, and will update our requirements accordingly.”

In an emailed statement to CTVNews.ca, Canadian Union of Postal Workers (CUPW) National President Jan Simpson said the union is “concerned” that Canada Post is refusing to allow its members to wear N95 masks.

“Research on the new Omicron variant has established it is more transmissible through shared air than earlier variants,” he said in the statement.

“The union has asked Canada Post to provide N95 masks or suitable alternatives to all postal workers, and at the very least, allow those who’ve purchased their own N95 or KN95 masks to wear them. As COVID-19 continues to spread rapidly, Canada Post Corporation should be doing everything in its power to protect postal workers, who continue to help people stay home and stay safe.”

British Columbia is rolling out the big guns – literally – to control avalanches that are forcing closures on some major roads for the first time in decades as the Western Canadian province grapples with a snowier-than-usual winter.

B.C. was rocked in 2021 by extreme weather events, including a record-breaking heatwave, wildfires and unprecedented rains that washed out highways and cut off Vancouver, its main city and home to Canada’s busiest port, from the rest of the country.

At the start of this month, B.C.’s alpine snowpack was 15% higher than average, according to the Weather Network channel.

Extreme winter weather, including November’s torrential precipitation, a deep freeze in late December and an early January thaw, has created weak layers in the snowpack, making steep mountain slopes more prone to avalanches that can release without warning onto valleys below.

“It’s been such a volatile fall and winter season so far, we have had rare ‘extreme’ avalanche warnings go out for parts of (B.C.’s) south coast in December and the risk is still considerable in the interior,” said Tyler Hamilton, a Weather Network meteorologist.

Avalanche control missions involve closing sections of highways while teams use explosives to pre-emptively trigger smaller slides, preventing the snowpack from becoming too deep and unstable.

This winter a section of Highway 1 through the Fraser Canyon, 150 km (93 miles) northeast of Vancouver, needed avalanche control for the first time in 25 years, B.C.’s Ministry of Transportation and Infrastructure said.

Along Highway 99 north of Vancouver, avalanche control and risk-reduction activities are three times the seasonal average, with some slide paths producing avalanches big enough to hit the highway for the first time in more than a decade.

Avalanche control in Allison Pass further south on Highway 3, another key route connecting Vancouver to the rest of Canada, has also been above average, the ministry said.

All three highways were damaged by the November floods, and a busy avalanche control season is putting further strain on provincial resources. The Coquihalla Highway near Hope only reopened to regular traffic on Wednesday, and provincial authorities said record snow and avalanche risk had delayed repairs to Highway 1 through the Fraser Canyon.

Further east in the province, avalanche teams in Rogers Pass, a rugged 40-km section of Highway 1 running beneath 135 slide paths in Glacier National Park, are dealing with nearly 30% more snowfall than usual and control missions are also above average.

Avalanche control missions involve soldiers from the 1st Regiment of the Royal Canadian Horse Artillery, which is stationed in Rogers Pass in winter. They use a howitzer to fire shells packed with 4 kg (8.8 lbs) of explosives in the direction of loaded avalanche paths at 17 different locations along the highway.

“Our goal is to bring down as much snow as we can and bring the hazard down to a point where it’s safe to open the highway,” said Jim Phillips, acting avalanche operations coordinator for Parks Canada, which runs avalanche control in the national parks.

The Rogers Pass program has been running since the highway opened in 1961. Before that, CP trains crossing the Selkirk Mountains in winter ran a higher risk of deadly snow slides, including one that killed 62 railway workers in 1910.

So far this winter the team has fired 333 howitzer rounds, produced 197 controlled avalanches and closed the highway for 43 hours over seven separate days.

Phillips said his team also uses heli-bombing and remote-trigger systems to set off detonations, and spends C$600,000 ($480,346) a year on explosives alone.

“It’s a balancing act. You want to keep traffic moving and minimize closures, but also minimize risk to people using the transportation corridor,” he added.

And winter weather in Canada is far from over.

Avalanche control is typically needed until late April or early May, depending on the snowpack, and the Weather Network forecasts above average winter storm systems returning to B.C. in February and March.

“We’re still in a La Niña situation,” said the Weather Network’s Hamilton, referring to a weather pattern that tends to result in above-average precipitation and cold temperatures in B.C.