HONG KONG—As the first major economy to beat back Covid-19, China is now taking the global lead in moving to unwind its pandemic-driven economic stimulus efforts.

Unlike the U.S. and Europe, which are still flooding their economies with liquidity and spending, China has started reining in credit in some corners.

The shift puts China at the vanguard in confronting a challenge other economies will face in coming years as their economies recover: how to withdraw stimulus without snuffing out growth or causing broader market instability.

China’s policy makers have expressed concern about an overheating housing market and want to prevent bigger imbalances. They are also eager to resume a multiyear campaign to curb debt that started building during the previous global recession. 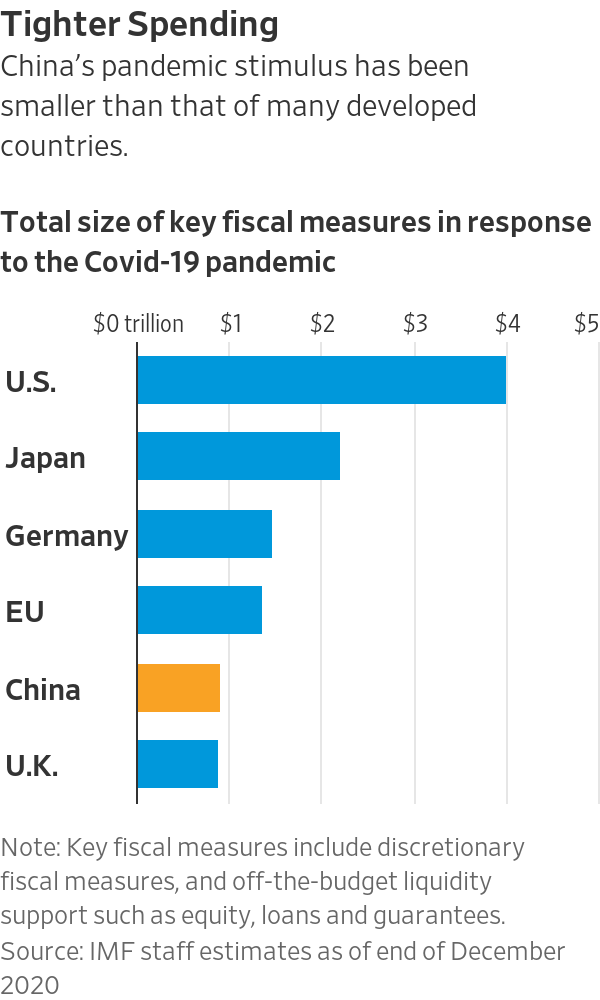 If mishandled, China’s tightening could impair its recovery, which would crimp the global economy. China’s plans could also create wider problems if they trigger more debt defaults or a bigger correction in China’s stock markets, at a time when global investors are already jittery.

For those reasons, economists say, China is likely to move slowly, gradually tightening credit in certain parts of the economy while avoiding more blunt-force moves like raising interest rates.

“It is very clear that China’s policy makers intend to unwind stimulus and tighten policies,” said

Ding Shuang,
chief economist for Greater China at
Standard Chartered
Bank, “but they’ve been treading ahead carefully without making a sudden U-turn.”

China signaled its intentions during annual parliamentary meetings held earlier this month. It set its target for 2021 gross domestic product growth at “above 6%,” a relatively low rate given the economy’s momentum and a sign that Beijing wants flexibility to withdraw stimulus in the coming months, economists said. The International Monetary Fund projects China’s economy will expand by around 8% this year. 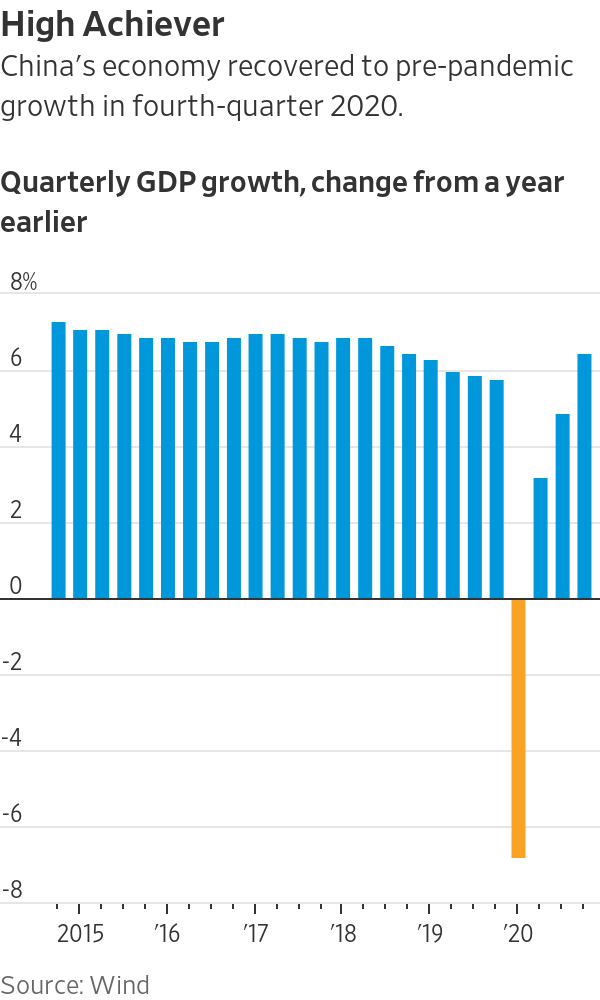 China lowered its fiscal deficit target—the gap between government spending and revenue—to 3.2% of GDP this year, from 3.6% in 2020. A smaller deficit suggests a more restrictive fiscal policy. The government also cut the quota for local government special bonds, a type of off-budget financing to fund local investments like infrastructure, to approximately $560 billion, down from $576 billion last year.

Beijing didn’t announce further issuance of special central government bonds this year, after selling approximately $154 billion of such bonds in 2020.

“As the economy resumes growth, we will make proper adjustments in policy but in a moderate way,” China’s premier,

Li Keqiang,
said at a news conference March 11. “Some temporary policies will be phased out, but we will introduce new structural policies like tax and fee cuts to offset the impact.”

Those moves followed earlier steps and were interpreted by investors as signaling tighter credit. In January, the central bank mopped up more liquidity than expected through daily open-market operations, a tool used to control the money supply available to commercial banks. That briefly sent a key short-term money rate to its highest level in five years, making it costlier for banks to borrow funds.

In contrast, last week the U.S. enacted a fresh $1.9 trillion economic aid package and the European Central Bank said it would boost its purchases of eurozone debt.

The different approaches reflect how Beijing views the pandemic as a temporary disruption, while Western policy makers are still trying to revive their economies and prevent long-term damage from the pandemic’s effects.

Beijing’s emergency measures last year included cutting taxes to help small businesses and ordering banks to extend more loans. Still, China’s fiscal measures amounted to far less as a share of GDP than those of the U.S. and many developed economies.

At the end of 2020, China’s total fiscal spending on pandemic stimulus was about 6% of its GDP, versus 19% for the U.S., according to IMF calculations.

China’s economy had recovered its pre-pandemic momentum in the last quarter of 2020, largely because of its success in containing Covid-19 and strong exports.

What is the best way for countries to withdraw stimulus without snuffing out growth or causing broader market instability? Join the conversation below.

Now its leaders worry more about controlling debt and other long-term economic issues, analysts say. Last year China’s overall leverage ratio, which measures the ratio of total debt to GDP, rose 24%—the fastest pace since 2009—to 270%, according to official data.

Many economists expect China’s central bank, the People’s Bank of China, to tame the pace of new credit issuance rather than raise key interest rates, which would risk attracting speculative money inflows that can fuel dangerous asset bubbles. The central bank has pledged to keep its monetary policy prudent and flexible, while avoiding flood-like stimulus.

“The market widely interprets PBOC’s tone as more hawkish” than before, said Mr. Ding of Standard Chartered. That could lead to risks, he said, if inadequate communication leads to market overreactions.

Another possible land mine is the potential for tighter credit to cause more defaults among state-owned enterprises. Many are heavily indebted, and local governments, which have their own debt problems, are increasingly wary of bailing them out.

“As China exits supportive measures, some of the problems that got glossed over last year may show up this year,” said Wang Tao, China economist at UBS. “We expect to see more corporate bond defaults and a higher bad loan ratio.”