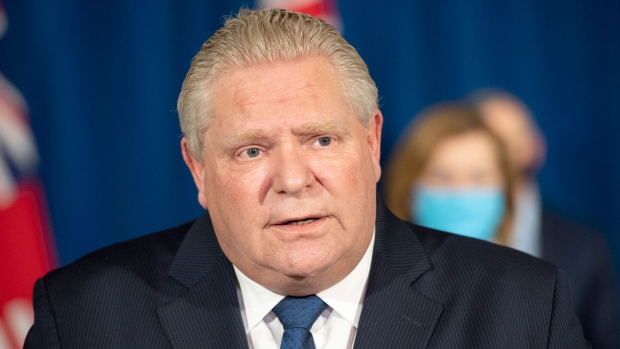 Ford made the comments on Friday while making an announcement about building a new hospital in Brampton.

“I’m as frustrated as they come,” Ford said. “It’s a joke. Fifty-fifth in the world.”

Ford said he blames the federal government for not securing enough supply vaccines.

He says an inconsistent supply chain has made planning the province’s vaccine rollout difficult.

“I’ve been very diplomatic and I’m very complimentary and collaborative with the federal government but enough is enough,” Ford said.

“This is becoming a joke. We need more vaccines.”

He said he has urged many Ontario mayors to start “banging on the doors” of federal MPs to demand more doses.

“At the end of the day, they’ve dropped the ball, majorly,” Ford said about the federal government.

In total, more than 1.8 million doses of COVID-19 vaccine have been administered to Ontario residents. More than 82,900 doses were administered in the last 24-hour period.

There are 306,373 people in Ontario who have received both doses of the vaccine and are considered immunized.

Hillier also said that with more planning, Ontario will be eventually able to vaccinate 300,000 people per day.

He also said that by the end of the weekend, more than two million people will have received a vaccine dose.

In Canada, nearly 13 per cent of the eligible population has received a COVID-19 vaccine.

The Trudeau government has promised that everyone eligible in Canada who wants a vaccine will be able to get one before the end of September.